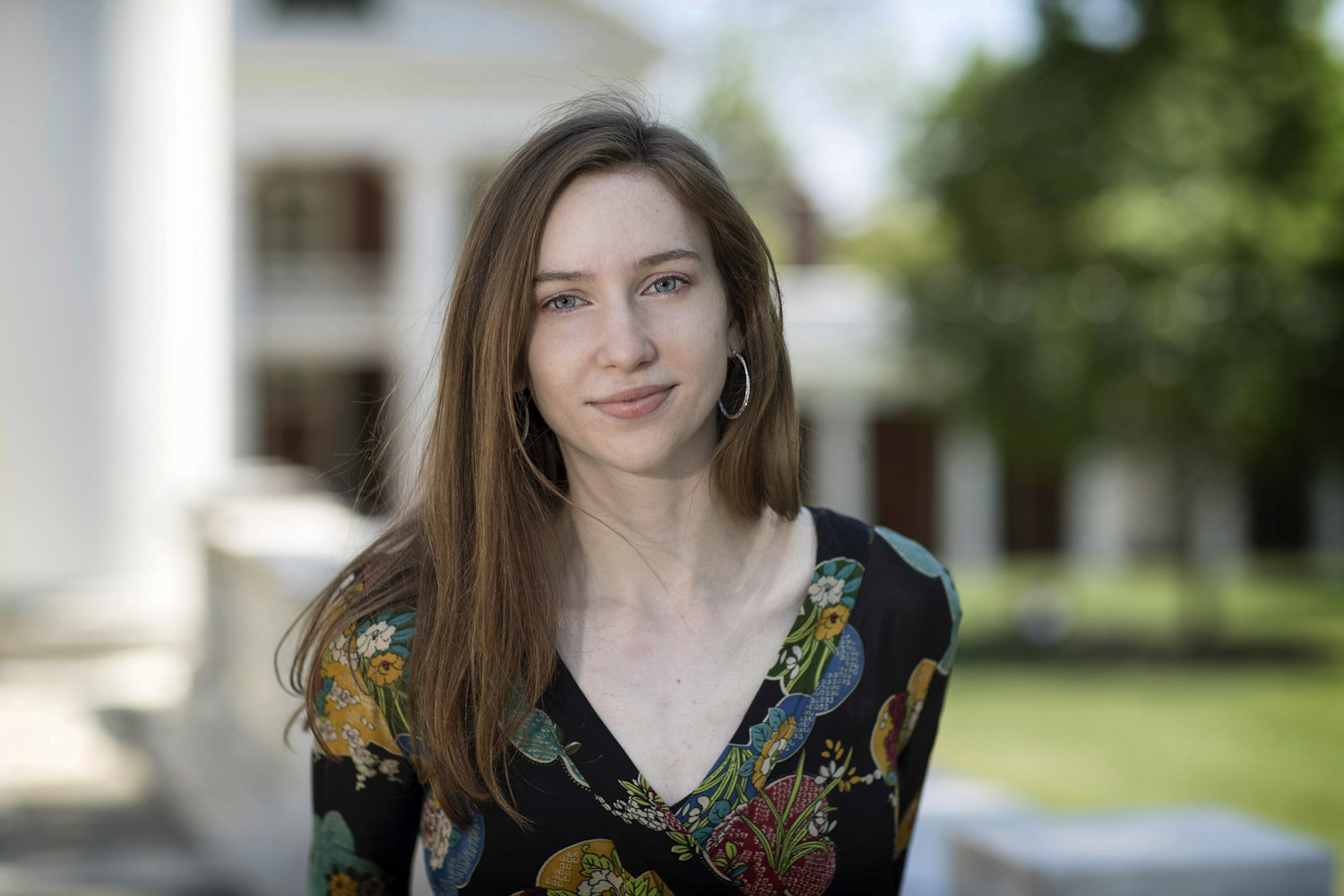 A high school thesis project evolved into an odyssey that brought a University of Virginia student from rural Virginia in touch with her passion on the other side of the world.

Olivia Grotenhuis, a third-year student majoring in foreign affairs and East Asian studies, spent her summer in Gwangju, South Korea, studying the Korean language and culture at Chonnam National University as part of the U.S. State Department’s full-immersion Critical Language Scholarship program. During her two months there, she gained insight into Korean culture and politics at a time it was periodically taking center stage of world attention.

The Korean peninsula first intrigued Grotenhuis as a student at Veritas Press Academy, an online classical education high school. She wrote her senior thesis on that region after reading “Escape from Camp 14,” about a North Korean political prisoner who was born in captivity and is the only person known to have escaped from this particular camp. “The book really shocked me because I didn’t know anything about North Korea, or even South Korea,” she said. “For my thesis project, I decided I was going to challenge myself to figure out why the U.S. is so preoccupied with North Korea. I realized this was my passion.”

“If Korean people care about it, that’s normal, but if you’re a white person from Madison County asking those questions, you are automatically an anomaly,” she said. “You’re strange for wanting to know those answers. There seemed to be a lot of fear, and I wanted to know why people were very afraid of this small country on the other side of the world. The more I looked into it, the more interesting and complex the issue actually was.”

After high school, Grotenhuis worked for a year at Liberty for North Korea, a nonprofit organization that rescues and resettles North Korean refugees. She then decided to study Korean in college, enrolling in Northern Virginia Community College’s Annandale campus, the only one that offered Korean. She moved to Centreville, which has a large Korean population.

“Centreville is pretty much as close as you can get to living in Korea while still living in Virginia,” she said. “It helped me explain while I was in Korea how I knew so much about Korean food and how I had so many interactions with Korean people.”

She transferred to UVA as a second-year student, studying the Korean language, but she was unable to speak it.

“I could write, I could read, I could do some listening, but it wouldn’t come out,” Grotenhuis said. “I didn’t have a practiced voice. And I got it in my head maybe I was not cut out for learning languages; maybe Korean is too hard, maybe I started too late in life. For me, [the Critical Language Scholars program] was my last-ditch effort to see if I could do this. If CLS didn’t work, I may have to give up.”

Grotenhuis was pessimistic, but the Critical Language Scholars program has a policy that very much limited her time to speak English, and her host family spoke only Korean.

“You have to speak Korean,” she said. “Within a week I was speaking sentences, which I had never done before. It was amazing. I wanted to cry I was so happy. I started to forget English words at one point because I was just using the Korean all the time.”

While in Gwangju, Grotenhuis examined the relationship between North and South Korea and their relationships with the United States. North Korea has long been a center of attention because of its nascent nuclear weapons program and its bellicose behavior. At UVA, North Korea has been an issue because of the case of Otto Warmbier, a McIntire School of Commerce student imprisoned while traveling in the north. He died in June 2017, days after being released in an unresponsive state and a month after he would have graduated from UVA.

“Otto Warmbier’s death was incredibly tragic,” Grotenhuis said, “but it is also emblematic of the widespread ignorance that Americans have had about North Korea and how bad the human rights situation is in the Democratic People’s Republic of Korea.

“What happened to Otto Warmbier gave me more motivation to do something like CLS because I want to be that kind of liaison for the non-Korean community. I want to help other people understand these issues so we can prevent instances such as the Warmbier case from happening again.”

But Grotenhius warned that the Warmbier case is not an isolated one.

“As UVA students, when we think about someone like Otto Warmbier – as tragic as that is – think of that times 100,000, because that is how many people are in the prisons in North Korea and go through whatever he went through every single day,” she said. “It is still happening and that is unbelievable. It is like this other Holocaust that is happening.”

Grotenhuis said the North Korean government has a three-generation punishment policy where not only is a malefactor imprisoned, but his or her parents and children are as well.

“It is unbelievably cruel,” Grotenhuis said. “A lot of people don’t seem to know about that side of it. There are the nuclear weapons and yes, we should talk about that, but then there is this whole human rights thing that also should be talked about.”

While much of the world has focused on North Korea’s nuclear weapons, Grotenhuis said people need to view it from the Korean perspective.

“We don’t ask ourselves, ‘Why do they have nuclear weapons?’” Grotenhuis said. “We just say they shouldn’t have them. But a state like North Korea has nothing but a nuclear program. That keeps other countries at bay; that keeps the United States away; that keeps South Korea away.”

She said while the North Koreans have a large army, studies have shown that because it is malnourished and ill-equipped, it would be no match for the South Korean army.

“The North Koreans have no economy,” she said. “They can’t sustain themselves with their natural resources. They are completely propped up by countries such as China. Of course they are going to keep their nuclear program because they would be completely illogical not to keep it.”

But the Korean “crisis” waxes and wanes and Grotenhuis is concerned that people’s attention on Korea evaporates when the fearful headlines fade away.

“I think it is a mistake to only think about it when there are headlines, because the issue is so complex,” she said. “The nuclear issue is not just, ‘Is North Korea going to fire a missile?,’ or ‘Are they going to sell their technology to failed states?’ That is why I am so passionate about this issue, because there are so many ways it affects our foreign policy that we don’t even think about.”

Still, Grotenhuis’ summer was not spent obsessing over the nuclear north. Nor do the South Koreans worry as much about the situation, having become acclimated to the division of the country.

“It has been more than 60 years,” Grotenhuis said. “Especially for people my age that I encountered, what is happening now is part of the normal, the ebb and flow of diplomatic relations. Sometimes there are moments when it is really tense, and sometimes there are moments when it seems there is going to be a breakthrough. I think for them this is how it is always going to be.”

And while there was the vague threat of a nuclear strike, Grotenhuis felt personally safe in Gwangju, which she found to be a very convenient city.

“There are convenience stores on every block, which was great, and businesses and restaurants are all open very, very late,” she said. “And it is also an incredibly safe country. For the first time in my life I would just go walking around at night and I would not be looking over my shoulder feeling like I was going to get mugged or something. As a female, I felt such a freedom living there, even though it’s this big city. You just feel like everyone has your back.”

Where her safety was at risk was in crossing the street.

“Cars don’t yield to pedestrians,” she said. “It was a change coming from Charlottesville, where everyone walks into the road and you just know the cars are going to stop. Especially UVA students. We are so bad with this, we just walk right into the road; we’re like squirrels. But going to Korea, I remember my host sister would pull me away from the road because I would walk out and she’d say, ‘You’re gonna die.’”

Grotenhuis, who wants to work on U.S.-Korea policy, possibly for the State Department, plans to return to South Korea for a longer period than two months.

“I am waiting until I have all my ducks in a row before I go back, because I want my experience to be even richer than my first experience was,” she said.

Traveling and living in South Korea has instilled in Grotenhuis a sense of self-confidence.

“I am a lot more resilient than I would have guessed,” Grotenhuis said. “I come from a family of people who are not travelers, not even within the U.S., and the idea of me getting on an airplane and going literally to the opposite end of the Earth was very terrifying for many people in my family. It was terrifying for me, too. Now coming back to the States, I have so much more confidence in my ability to problem-solve and be OK in unfamiliar situations.”

A Year We Will Never Forget: 2019-20 in Review END_OF_DOCUMENT_TOKEN_TO_BE_REPLACED

‘What Will You Carry With You?’ Remarks From UVA President Jim Ryan END_OF_DOCUMENT_TOKEN_TO_BE_REPLACED