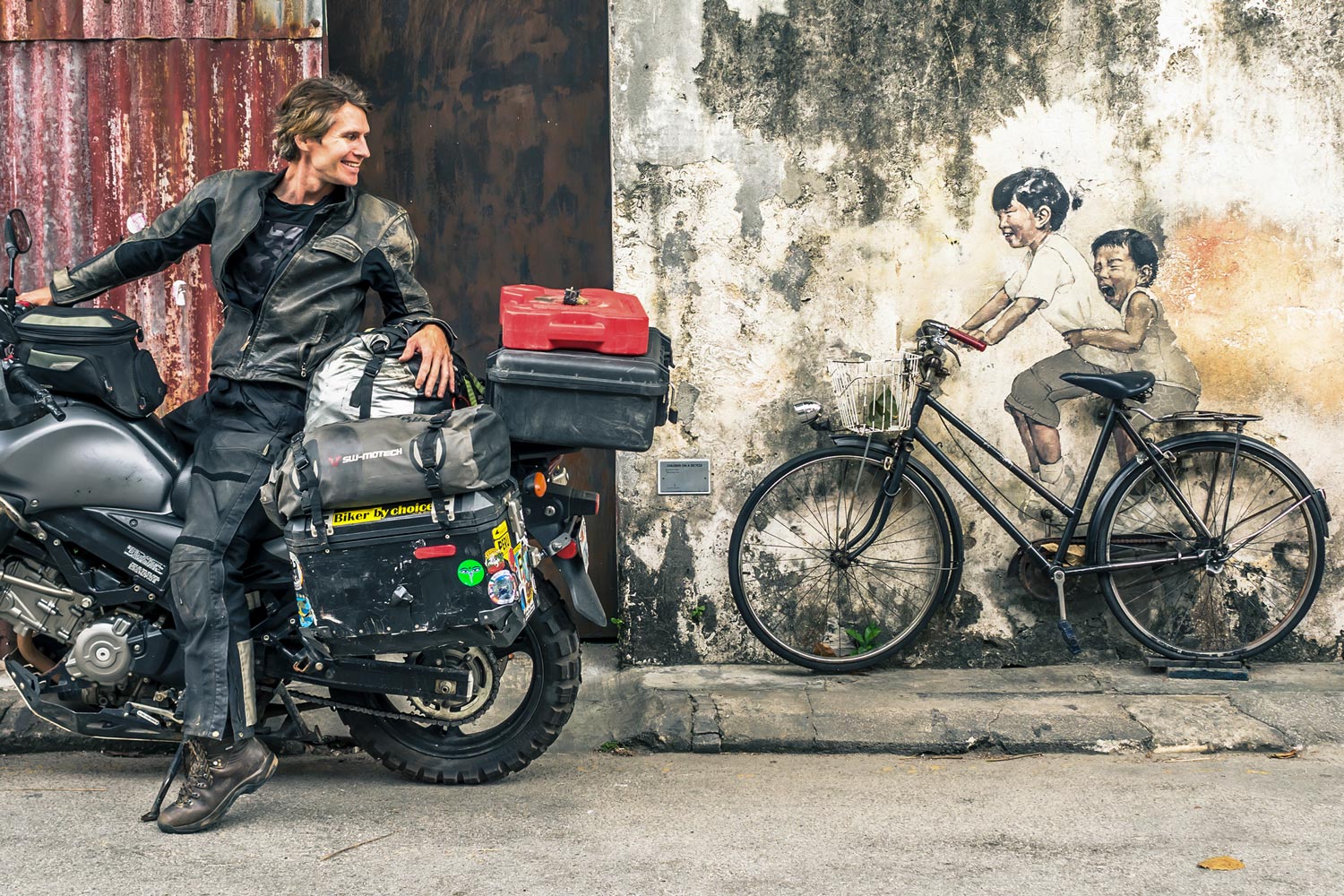 In July, Eric Bernath crossed what was to be the final border of his 100,000-mile trip around the world, riding his motorcycle into his home state of Michigan after an epic 65-country, 50-state road trip conducted on his Suzuki V-Strom 650 motorcycle.

It’s a journey – conducted solo with little more than clothes, camping equipment and a camera, and exhaustively documented on Instagram (@twowheelsonejourney) – that took the 2008 graduate of the University of Virginia’s Darden School of Business from a May 2016 start in California across seven continents – yes, he made it to Antarctica – and from Argentina to Zambia.

Speaking during a brief stop in Denver during the final leg of his journey, Bernath, 42, said he saw a rare opportunity to take a “mini-retirement” from the working world and satiate his longstanding curiosity about the wider world.

“It was an opportunity to take a break from the Monday-to-Friday routine and open a blank slate and embrace some new ideas and perspectives,” he said. “I had a good thing going on, but realized I had that one chance in life you get when there is nothing holding you down, and you can explore a little bit and grow a little bit if you have the opportunity.”

Two wheels headed North .. I am already a few hundred miles North of Los Angeles. But one last picture of the two wheel ride carrying me to Alaska. Before it left the familiar confines of Southern California and the Pacific Ocean. .. We all need to encourage experiences that are so resonant that we feel the chills down to our toes. I am confident that the next year on these two wheels will make that a reality #AlaskatoPatagonia #California #Malibu #Vstrom650 #roadtrip

At the beginning, Bernath said he sent his farewells to his colleagues at a Southern California biopharmaceutical company, gave away almost everything he owned and set out to ride his motorcycle across the world.

He started up the West Coast to Alaska; then went back down to Chile and Antarctica; across the Atlantic Ocean to South Africa and up to Scandinavia, through the Middle East and Southeast Asia; over to Australia and New Zealand; and finally the remainder of the United States.

He also made it to his 10-year Darden reunion in May. Thanks in part to his devoted Instagram following, Bernath said he could mostly skip the obligatory “What are you up to these days?” questions.

.. .. Charlottesville - one of the more overlooked American roadtrip destinations. Filled with history and culture somewhat reminiscent of Europe - it is also one of my favorite “homes” of the past few years. .. I was fortunate enough to time my road trip back here to Charlottesville for my University of Virginia class reunion. Shout out to my Darden classmates near and far, and apologies to those who I couldn’t quite catch up with enough during our all-to-short weekend engagements. Spring has flown by so fast that it should get a speeding ticket. .. #TheGreatAmericanRoadTrip #Virginia #Charlottesville #DardenGrounds #twowheelsonejourney #coasttocoast #ridetheworld #roamtheplanet #welivetoexplore #neverstopexploring #wanderlust #makeeverydayanadventure #motolife #motorcycleadventure #motorcycletrip #letsgosomewhere #motorcycletouring #travelamerica #overland #roadtrip #travel

The takeaways from two years of travel on a bike don’t lend themselves to quick summaries, but Bernath said most would be surprised by the general friendliness of the world, even in regions with reputations for danger.

“I went through Iran, Colombia, El Salvador, and I met some of the most genuine, honest and welcoming people in those places that you can imagine,” he said, “people who surprised you by offering as much as they can give, regardless of how little they have.”

In Iran, strangers insisted on inviting him for tea or a meal, for instance, for no other reason than he was a stranger in their midst. In South America, passengers routinely braked their trucks to inquire if he was all right during his frequent stops to reorient with Google Maps.

.. .. “I Knew I Should've Taken That Left Turn At Albuquerque!” .. I used to love hearing that line from Bugs Bunny on Saturday morning cartoons. It meant Bugs was about to have an adventure somewhere in the world. Motorcycling to Tehran seems as though I am just like the rabbit, pulling out the map for one of those crazy escapades. .. .. .. #AtlantictoPacific #longroadbacktoCalifornia #Iran #twowheelsonejourney #motorcycleadventure #overland #Adventurerider #Advrider #motorcycletrip #motolife #roadtrip #neverstopexploring #travel #motorcycletouring

“The motto I heard other riders say is, ‘Today you, tomorrow me,’” Bernath said. “So, if you have a problem on the road, they are looking to help you out because tomorrow they could be in the same situation.”

Finding places to eat and sleep were rarely an issue, he said, adding that “a smile and wave” go a long way toward breaking down language barriers and ingratiating oneself into a foreign community.

The one time his bike required a repair, when the rear tire gave out in rural Chile, Bernath said passersby loaded his bike into a pickup truck and took him to the lone mechanic in town, an elderly man operating out of his driveway. The man diagnosed the issue and began to work on the bike, and told Bernath – quite seriously, in Spanish – he knew why he had suffered a breakdown.

“He said ‘I know exactly why your bike stopped. I was very bored today and I needed company, so God made it so you would visit,’” Bernath recalled. “You just realize that people want to smile and look for ways to help you one way or another.”

The Mechanic .. The newly found bike mechanic said that God must had sent us, because he was really bored. Gaston is an 80 year old moto mechanic. We learned that the entire Northern Chilean repair world seemed to know Gaston. He said he is also the oldest living firefighter in Chile (he showed off the plaques displayed in his modest house). .. His "workshop" was his driveway, filled with old bikes and parts strewn in disarray. We asked if we should take this particular bike problem to a bigger shop. He said no, since all of the other moto repair shops in town "are a**holes". Anyway, he said he could help in the morning and I could leave things in his yard for the night. So, with that, I left everything I owned with a random Chilean I'd known for 5 minutes and headed off to a hostel to sleep away the frustrations of the day. .. #AlaskatoPatagonia #Chile #panamericanhighway #Adventurerider #Advrider #motorcycletrip #motolife #motorcycleadventure #overland #Vstrom650 #Suzuki #roadtrip #riding #moto #travel #explore #dualsport

Trekking through the U.S. in the final stages of the journey, visiting Niagara Falls, Key West, the Grand Canyon and all of the American curiosities in between, Bernath said he was experiencing the land and the people for the first time, even in spots where he’d been before. That’s partially due to the motorcycle, which Bernath said is a natural barrier-breaker.

“When you are in a car or SUV, no one is really knocking on your window at the gas station and saying hello or asking how you’re doing,” he said. “When you are on a motorcycle, people just walk up to you any place you’re at and want to share a moment of your time. You realize quickly that adds joy to their day, but also to yours.”

Bernath, who had never been on a motorcycle before this adventure, reflected another anecdote he picked up on the road: “Driving a car on a long road trip is akin to watching a movie, but when you are riding a motorcycle, it is like you are in the movie.”

Explore more .. Travel allows one to bear witness to the earth in all of its majesty, and to intimately explore its scale and splendor. One last photo before I depart Antarctica - with gratitude to @quarkexpeditions and the Ocean Diamond for a spectacular journey to the bottom of the world. @restlesstravellers .. #AlaskatoPatagonia #Antarctica #penguins #glacier #mountains #magicalplaces #travel #worldtravel #explore #TravelwithQuark #exploremore #welivetoexplore

Now, with the credits set to roll on this particular movie, Bernath said he’s ready to step back into the working world, ideally in the medical field.

“I am not one who is wanderlusting to have this drag on forever,” he said. “I have satisfied that curiosity to the extent that I wanted to go on this particular trip, and it’s been a great way to learn some important life lessons.”

Bernath said his two-year ride bore similarities to his two years at Darden, describing both as opportunities to replenish and even remake oneself through curiosity.

“You get to fill that glass up with whatever you’re learning and you become a new person,” Bernath said. “Whatever job I have next, whether it’s in a big corporate office or a small business, I’ll always be able to go back to that glass and tap that joy that I’ve had through these experiences.”

What’s Next for UVA’s Class of 2022? END_OF_DOCUMENT_TOKEN_TO_BE_REPLACED