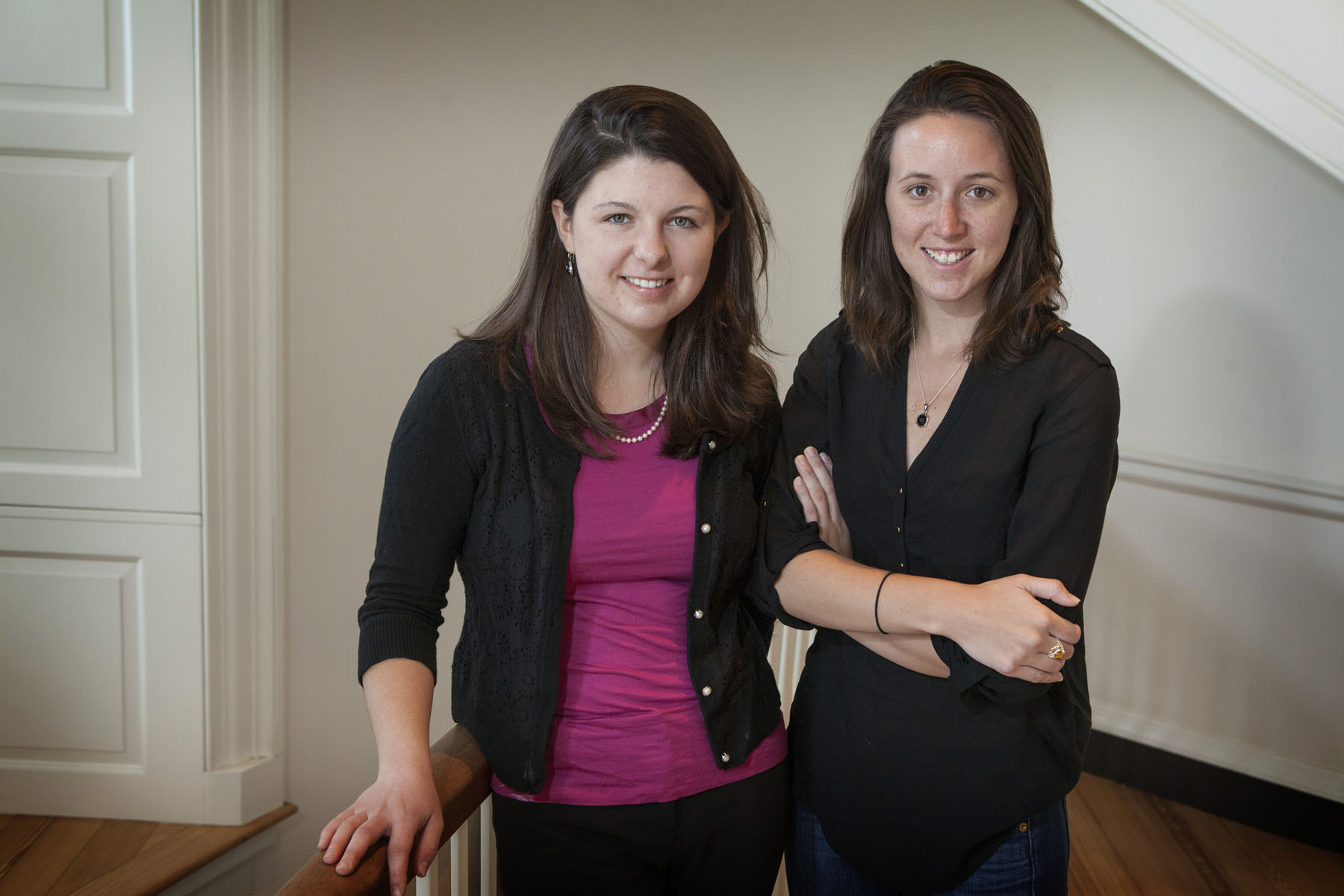 Lacey Williams (left) and Carolyn Pelnik are recipients of the 2013 Davis Projects for Peace award for a micro-financing and agricultural education program designed to empower women in Tanzania.

Two University of Virginia fourth-year students will use a Davis Projects for Peace award to help educate poor and oppressed women in Tanzania.

Lacey Williams, 21, of Columbus, Ga., and Carolyn Pelnik, 22, of Richmond, are both students in U.Va.’s School of Engineering and Applied Science, with Williams focusing on biomedical engineering and Pelnik on engineering science and public policy. Pelnik is also a first-year student in the accelerated Master of Public Policy program in the Frank Batten School of Leadership and Public Policy.

Philanthropist Kathryn W. Davis launched Projects for Peace on her 100th birthday in 2007 and has renewed her commitment every year since. This year, the Davis United World College Scholars Program is awarding more than $1.2 million in $10,000 grants to students for projects to be completed this summer.

The University of Virginia has had a Projects for Peace recipient in each of the program’s seven years of operation.

Williams and Pelnik’s project works in partnership with the Jifundishe Free Library in Ngongongare, Tanzania, and Global Grassroots, a nongovernmental organization founded by Gretchen Steidle Wallace, a 1996 foreign affairs graduate of U.Va.’s College of Arts & Sciences. Their plan is designed to increase women’s empowerment through agricultural and business education and microlending.

Relying on studies that link domestic violence and high-risk sexual behavior with “food insecurity,” Williams and Pelnik believe they can increase crop yields, providing Tanzanian women with greater incomes and increasing their security.

“After spending a lot of time planning with the host organization in Tanzania, we are very excited to be able to complete the project,” Pelnik said. “Through the grant award, we will provide financial and agriculture training for a women’s microfinance group at the Jifundishe library NGO, and study the benefits of both trainings.”

The students cite studies that indicate rural poverty rates in Tanzania hover around 50 percent, and that 60 percent of the women older than 15 have experienced some form of physical or sexual abuse.

The students’ mentor, Christine Mahoney, assistant professor of politics and public policy at the Batten School and the Woodrow Wilson Department of Politics in the College of Arts & Sciences, praised the duo for their project.

“Violence against women is a major barrier to building peace in developing countries,” she said. “Empowering women through leadership training and economic development helps them protect themselves and create a more equitable and peaceful society for their daughters.”

Mahoney said she was also impressed with their preparation. The students have taken a three-month course on conscious leadership and social entrepreneurship offered through Global Grassroots and an intensive weeklong business skills class.

“Both students have expressed a deep appreciation for cultural sensitivity and a desire to make a difference in an enlightened and ethical way,” Mahoney said. “I think they will be ideal ambassadors for the Davis Projects for Peace program as well as the University of Virginia.”

Both Williams and Pelnik are Jefferson Scholars, Rodman Scholars and participants in the Jefferson Public Citizens program.

Williams is a member of Tau Beta Pi engineering society and the Raven Society as well as a Lawn resident.

Williams is a graduate of Columbus High School and plans to become a doctor working with patients and specializing in public health. “With the desire to become a physician, this project enables me to collaborate with people of another culture to improve health and well-being,” she said.

Pelnik, a graduate of Henrico High School, plans to complete a graduate degree in public policy before pursuing a career in natural resource management.

“I am excited to gain experience working abroad in a resource management capacity, particularly in a developing community where efficient resource allocation is essential to sustainable development,” she said.

Brian Cullaty, director of undergraduate research opportunities at the Center for Undergraduate Excellence, lauded the pair’s contribution to public service.

“As two-time Jefferson Public Citizen award-winners, Carolyn and Lacey have demonstrated their commitment to positive social change through sustainable development,” he said. “Now, through the generosity of the Davis Foundation, Carolyn and Lacey will be able to build on their JPC experiences, using their research and leadership skills to address a community-identified need and to promote a long-term vision for peace.”

“The competition was keen and we congratulate the students whose projects have been selected for funding in 2013,” said Philip O. Geier, executive director of the Davis United World College Scholars Program, which administers Projects for Peace. “Kathryn Davis feels a great urgency about advancing the cause of peace in the world, and she is investing in motivated youth and their ideas in order to accelerate efforts for peace in the 21st century.”