Determined Class of 2008 Marches Past the Dark Clouds at Commencement 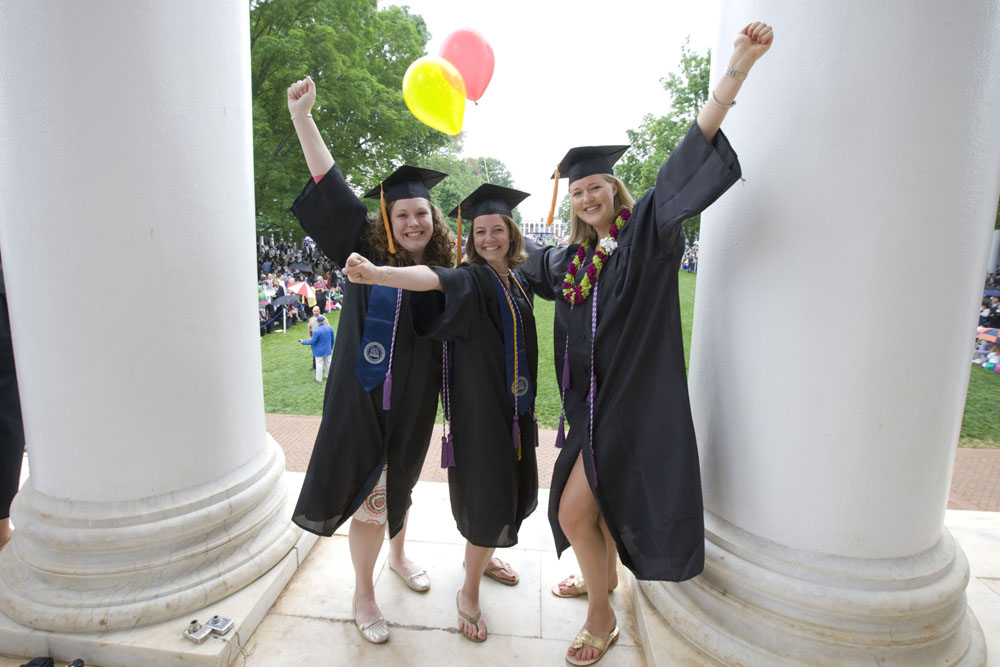 Members of the Class of 2008 were undaunted by the storm clouds.(Photo: Dan Addision)

May 18, 2008 — The members of the University of Virginia's Class of 2008 weren't about to let the dark clouds hovering over the Lawn diminish the joy of the day.

After all, they are not unfamiliar with tumultuous times. They were high school sophomores when Sept. 11 occurred and wars in Afghanistan and Iraq have punctuated their college years. Closer to home, they held tear-stained vigils when a gunman killed 32 Virginia Tech students in April 2007.

A little rain? No problem.

The ebullient graduates, festooned with balloons of all colors and wildly decorated mortarboards, ambled happily down the middle of the Lawn, parting a similarly colorful sea of umbrellas wielded  — only briefly — by their parents and friends. They then cheered one another heartily as University President John T. Casteen III conferred nearly 6,400 degrees.

(The threat of rain did drive the schools' and departments' individual diploma ceremonies under cover, forcing some graduates to wait until as late as 7 p.m. to pick up their diplomas. The class booed – somewhat good-naturedly – when Casteen announced the shift in plans.)

The turmoil the class has witnessed "probably made us a lot closer," said Amanda Rogers of South Boston, Va., who completed her biology degree in just three years. "It made us realize that we have brothers and sisters all over the state — all over the world — and how precious life is."

Ashley Goin agreed. "I think there's a lot more awareness of what other students are going through," said the Buckingham, Va. native, who earned a bachelor's degree in psychology and political theory.

The class' journey was a story of determination in the face of adversity. Despite the ominous drone of world events, the 2008s set new standards in performing both research and public service. And during the last academic year alone, almost 1,900 students studied abroad in 79 different countries.

"Not so long ago, most American college students studied in American universities to prepare themselves for careers and lives in American communities," Casteen noted. "We live now in a global century, and our students learn to become global citizens. ... Considering the Class of 2008, I am struck by the ways in which these students have conducted their studies with a global perspective.

"I'm struck also by the coincidence of the global perspective and a fundamental commitment to serving others. This class, perhaps more so than any in our past, has built its aspirations for the future on the largest conceivable scale — global — and on the immediate human scale, service to those around us."

Even when they remained on Grounds, the new graduates learned amid the most diverse enrollment in University history. Casteen noted that for the first time, more than 10 percent of the graduates were international students.

Bin Zhou of Springfield, Va., who took degrees in computer science and economics, recalled that his time at the University was book-ended by the ideological debates of two presidential elections. "I used to think of the world as right or wrong," he said. Four years of exposure to classmates from many different backgrounds have led him to conclude that "people have lots of different opinions. There is a lot of gray area."

But people with divergent views were often united, too. Jamar Walker of Onancock, Va., whose degree is in political philosophy, policy and law, remembered a series of incidents with racial overtones that occurred during the fall of his second year, leading to a black-ribbon campaign for a football game. The ribbons were worn by black and white students alike. "It showed the togetherness of the class and the school as a whole," he said.

That process of gaining a wider viewpoint was the thrust of the Finals Address  by Hunter Rawlings, president emeritus of Cornell University and a visiting professor of classics at U.Va. this spring.

Rawlings recounted how students in the undergraduate seminar he taught explored the influence of classical thinkers upon the United States' founding fathers, just as classical architecture influenced Thomas Jefferson's design for the Academical Village.

Now, he said, his students see the Lawn with new eyes, and read documents like the Declaration of Independence with a new depth.

"They are not content with Internet answers to tough questions," he said. "Here, I submit, is the value of a liberal education: to see familiar things with new eyes, and to form judgments based upon hard-won knowledge."

He closed by noting the Greek inscription in the frieze above him on the face of Old Cabell Hall, a quote from the Gospel of John – "You will know the truth, and the truth will make you free."

"The truth is what you now commit yourselves to find," he said, "and I wish you Godspeed in finding it."