Did The Lawn Pass Its Final Exercises This Year? 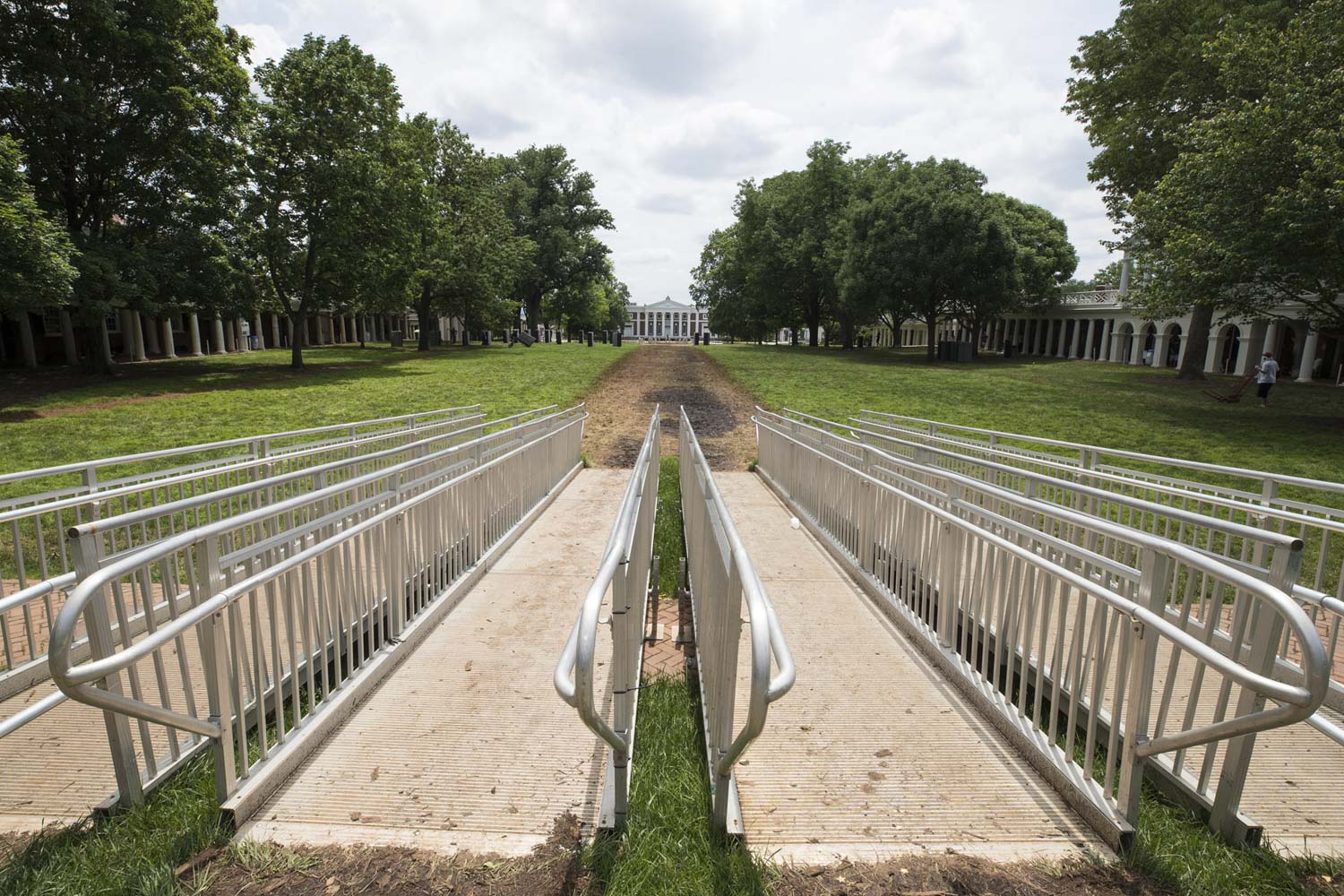 The Lawn absorbed some damage on Finals Weekend, as heavy foot traffic combined with rain water to churn the soil. (Photos by Dan Addison, University Communications)

“Walking the Lawn” during Final Exercises is a cherished tradition at the University of Virginia. Graduates and faculty members process down the middle of the iconic Lawn, the centerpiece of founder Thomas Jefferson’s Academical Village, from the Rotunda to Old Cabell Hall, flanked by thousands of family members and friends.

The tradition is so cherished, in fact, that ceremonies typically will only be moved indoors in the event of dangerous weather, such as high winds or lightning. Mere rain – even the 4.35 inches that fell before and during this year’s graduation ceremonies – does not preempt tradition.

But tradition can leave a muddy mess. The Lawn sustained heavy damage during this year’s Finals Weekend.

It is standard practice each year to leave in place the aluminum ramps that allow the graduates to traverse the terraces as they process – at least until after the first of two Reunions Weekends. And each year, the grounds crew re-sods the patches where the ramps have shaded out the grass.

But this year, a center strip of the Lawn measuring 30 feet wide by 700 feet long, about 15 percent of the Lawn, will be re-sodded because of the damage to the turf during Finals Weekend.

“It was pretty torn up down the middle,” Richard Hopkins, landscape superintendent with Facilities Management, said. “It took quite a beating between the rain and the feet. They were stirring the water into the dirt like a stew.”

The ground withstood heavy rains during the week leading up to graduation, and it rained again during the Saturday ceremony. Hopkins said the combination of the sodden ground and the roughly 7,000 graduates processing down the center of the Lawn was too much for the grass. 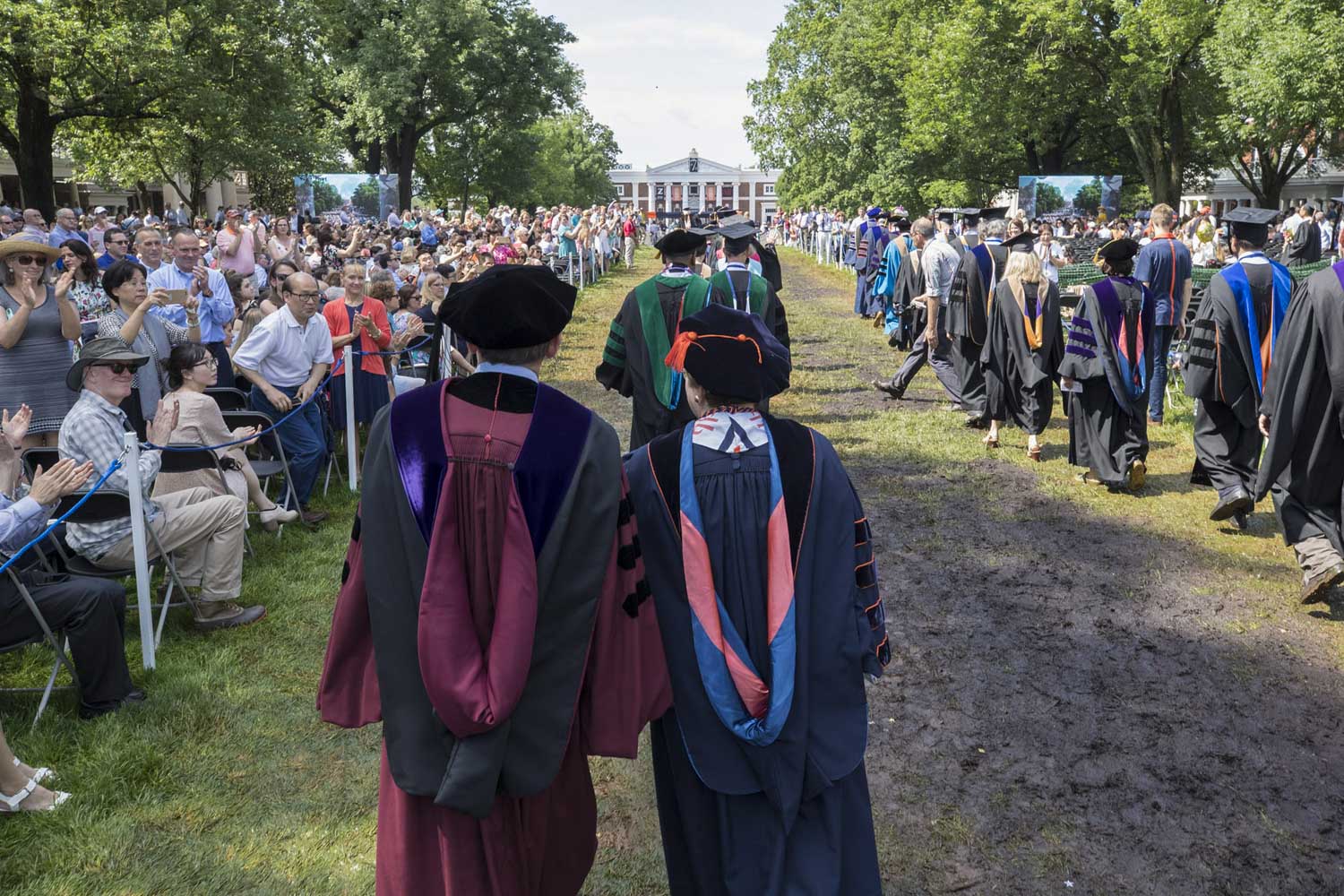 Workers had installed under-drains during the last whole-Lawn re-sodding in 2012, but the heavy clay soil allows the water to drain off only so much at a time. By contrast, nearby Madison Bowl, which was re-sodded several years ago, has a sand base that drains quickly, Hopkins said, but the presence of 100-year-old trees on the Lawn prevented the grounds crews from excavating the Lawn and installing a sand base. The Lawn’s new drains also were not designed to handle the heavy volume of water the rains produced in such a short period of time.

There was quite a bit of water standing on the Lawn prior to Saturday morning’s procession, so groundskeepers spread double-shredded hardwood mulch in hopes of keeping graduates from walking through standing water.

“We wanted to fill in the low spots to elevate them,” Hopkins said.

The mulch helped some, but there was little that could be done with that much rain. While it did not rain on Sunday, the ground remained sodden and susceptible to damage. And, depending on the footwear, walking could be difficult.

“I saw a lot of graduates wearing mud boots and hiking shoes and sneakers,” Hopkins said.

University crews will re-sculpt the Lawn before the new sod is installed.

“We are going to re-crown the center, so it is more raised, and then install new sod,” he said.

Carolina Green, an athletic field construction firm from North Carolina, will do the re-sodding, installing turf that comes from a farm in Orange County. What is left of the old sod will be composted and used as a soil amendment in other University landscaping projects.

The re-sodding is scheduled for late June or early July. The sod will match the tall fescue grass already used on the Lawn, a modern version of the grass Jefferson planted there – a variety that remains green in the winter, but which goes dormant in summer when the temperature rises above 90 degrees.

“It comes back to life when the temperatures cool down in the fall and the students come back to Grounds,” Hopkins said.

The center of the Lawn was not the only section that suffered. The chairs set out for graduation protected some parts of the Lawn, but the aisles between the rows were also heavily worn. Hopkins said landscaping crews would put down some light fertilizer and some grass seed and those areas will come back on their own.