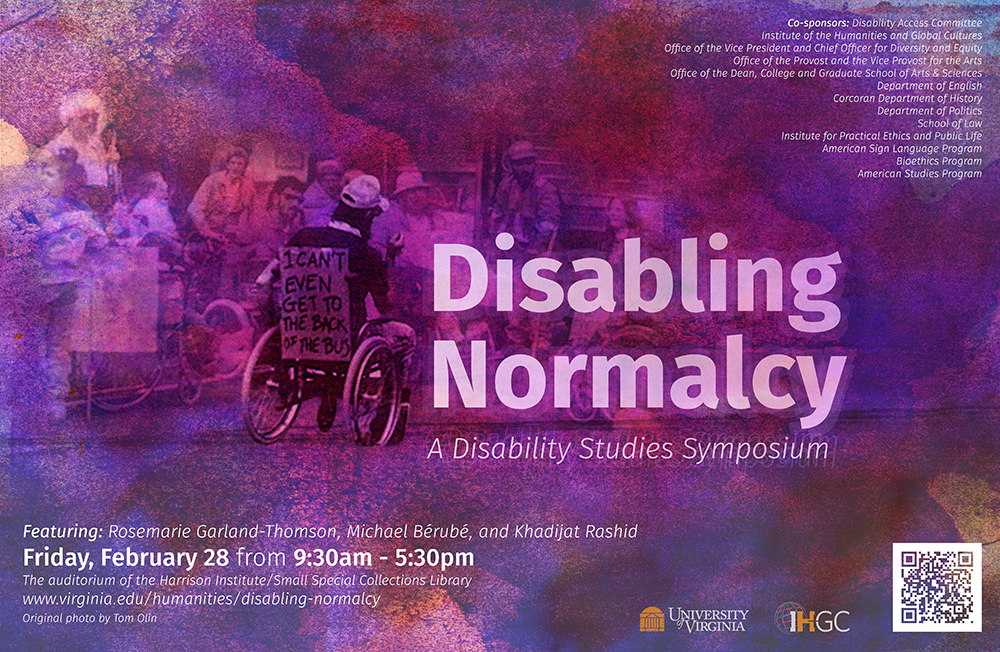 The worst disability can be a person’s attitude, some people say.

The field of disability studies aims to challenge attitudes about what is considered “normal” and increase public awareness about how society treats, portrays and accommodates the wide range of people with disabilities – which the United Nations estimates at 15 percent of the world’s population, or 1 billion people, making them the world’s largest minority group. The University of Virginia will host several prominent scholars at its first-ever symposium devoted to disability studies on Feb. 28.

“Disabling Normalcy” will begin with a pre-symposium screening of the film “Lives Worth Living” on Feb. 27 at 7:30 p.m. in Nau Hall auditorium. Drawing upon archival footage, the one-hour documentary traces the development of consciousness of the pioneers in disability rights who realized that in order to change society, they needed to work together. Lois Shepherd, a U.Va. law professor of biomedical ethics and public health, will lead a discussion afterward.

The symposium itself – to be held in the auditorium of Harrison/Small Special Collections Library; all events free and open to the public – will include several panel discussions exploring disability from various perspectives, such as music, history, civil rights and law, plus talks by visiting speakers.

Rosemarie Garland-Thomson, a professor of women’s studies at Emory University, will talk about “What We Gain From Disability” at 10 a.m. Called by Utne Reader one of “50 Visionaries Who Are Changing Your World,” she devotes her scholarship to developing the field of disability studies in the humanities, as well as in women’s studies.

Her books include “Staring: How We Look,” published in 2009, which explores the factors that motivate people to stare and considers the targets and the effects of the stare; “Disability Studies: Enabling the Humanities,” an edited volume from 2002 that provides perspectives on disabled people and on disability in the humanities, the arts, the media, medicine, psychology, the academy and society; and the 1997 “Extraordinary Bodies: Figuring Physical Disability in American Culture and Literature,” which inaugurated the then-new field of disability studies by framing disability as a minority discourse rather than a medical one.

Khadijat Rashid, a business professor at Gallaudet University, will speak on “The Global Deaf Community: Language Minority or Disability Group?” as part of a 1:30 p.m. panel discussion. Rashid has worked with deaf communities in Africa and Thailand, as well as with the National Deaf Business Institute.

Michael Bérubé, an English professor at Pennsylvania State University who focuses on disability studies, cultural studies and American literature, will discuss “The Ubiquity of Disability” at 3:30 p.m. Bérubé wrote the 1996 book, “Life As We Know It: A Father, a Family and an Exceptional Child” about the early years of his son, who has Down syndrome. The book also examines disability rights, abortion and prenatal testing, early intervention programs, early childhood language acquisition, school policy and theories of justice. Director of Penn State’s Institute for the Arts and Humanities, Bérubé earned his Ph.D. from U.Va. in 1989.

“It will be an interdisciplinary feast,” said English professor and symposium organizer Christopher Krentz, who heads U.Va.’s American Sign Language Program. He said disability studies arose as a reaction to the medical model of disability, which focuses on the individual and the body.

“Disability is not a problem to be solved, but it complicates ideas of what it means to be human,” he said. “Disability studies includes medical aspects, but shifts the attention to society. It’s empowering for disabled people, because it lifts the burden from them and makes the responsibility all of ours” – responsibilities for increased awareness about issues surrounding stereotypes, assumptions and physical space designs and for bringing about change.

According to the United Nations, the term “persons with disabilities” includes “those who have long-term physical, mental, intellectual or sensory impairments which, in interaction with various attitudinal and environmental barriers, hinders their full and effective participation in society on an equal basis with others.”

Just as the Civil Rights Movement led to African-American studies, disability studies is an academic field with a real-life, civil component, Krentz said.

A member of the disability access committee in the Office for Diversity and Equity, Krentz said the committee wanted to bring together people who don’t usually get together. U.Va. will be well-represented on the symposium’s discussion panels, with a dozen scholars participating, including associate professor of architecture Phoebe Crisman; Marcia Day Childress, associate professor at the Center for Biomedical Ethics and Humanities in the School of Medicine; associate professor of music Bonnie Gordon; poet Paul Guest, assistant professor in the Creative Writing Program; and Michael Smith, professor of political and social thought in the politics department. (See schedule).

There will also be an exhibit in the Small Special Collections Library, “Disability in the Archives,” from Feb. 24 to March 20 and from March 29 to April 26.

The event locations are wheelchair accessible. All symposium sessions will be interpreted into ASL.

The symposium is sponsored by the University’s Disability Access Committee, a subcommittee of the Diversity Council, and the following University co-sponsors: Institute of the Humanities and Global Cultures, Office of the Vice President and Chief Officer for Diversity and Equity, Office of the Dean of the College and Graduate School of Arts & Sciences, Office of the Provost and the Vice Provost for the Arts, Department of English, Corcoran Department of History, Woodrow Wilson Department of Politics, School of Law, Institute for Practical Ethics and Public Life, American Sign Language Program, Bioethics Program, American Studies Program and Center for
Biomedical Ethics and Humanities.