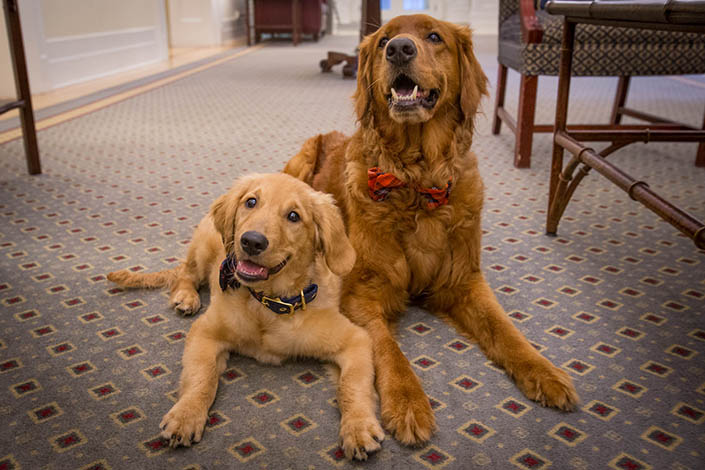 When new students begin arriving on the University of Virginia’s Grounds later this month, a large, highly trained team will be waiting to welcome them. Some of them even run on four legs and are trained to sit, stay and roll over.

This crew of canine Wahoos represents a long tradition of helpful pooches at U.Va. Storied “mascots” Beta and Seal – now entombed just outside the wall of the University’s cemetery – were the first to capture the hearts of the student body in the late 1930s and early 1950s. Both had the run of Grounds – including classrooms and the sidelines of football games – and were eventually saluted by crowds of more than 1,000 mourners at each of their funerals. 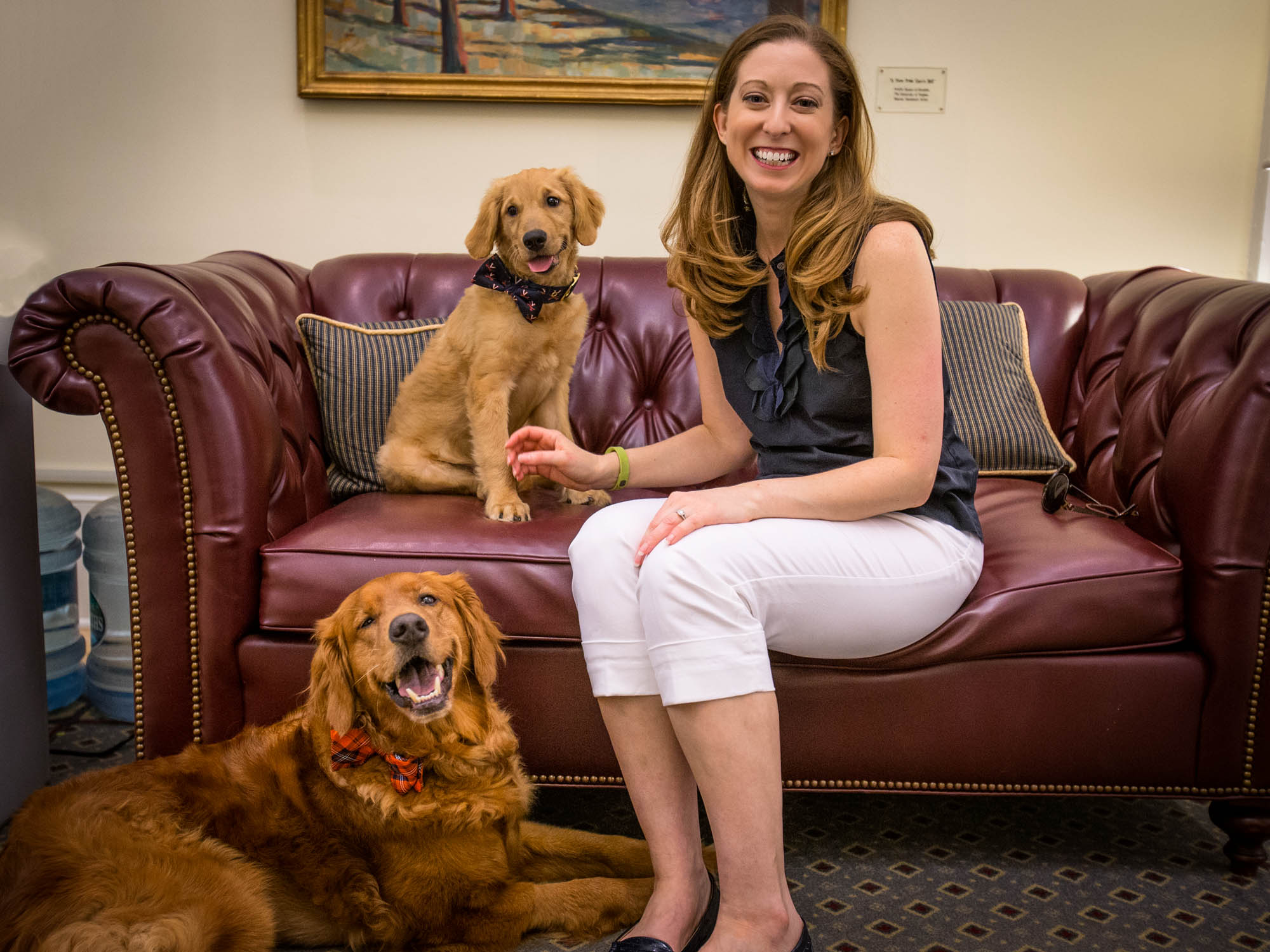 Today the mantle of unofficial mascot has been passed on to the lovable “CavDog,” Baxter, and his new cavalier-in-training “CavPup,” Jack. Baxter first rose to Internet stardom in 2008 when his owner, Associate Dean of Admissions Jeannine Lalonde, posted his picture on her popular “Notes from Peabody” blog aimed at prospective students.

“One day, someone asked me about the weather here and I had a picture of Baxter in his first snowfall and he looked very unimpressed by it. So I put that up on the blog to show our northern students that they probably wouldn’t be all that impressed by our winter,” Lalonde said. “People really responded to it and he’s been appearing ever since.”

Through his many appearances on the blog and Lalonde’s social media accounts, Baxter has become something of an ambassador for the Admission Office. Prospective students and parents expect to see him at Days on the Lawn, sporting his signature U.Va. bowtie collar.

“There are a lot of people that come to the front desk asking for them, but I don’t bring them every day because I have to get work done!” Lalonde laughed.

Baxter may be the ultimate icebreaker. Even the shyest students have trouble resisting his toothy grin and willingness to be petted. He and his new sidekick, Jack, help prospective students relax enough to approach Lalonde with questions or strike up a conversation with one another.

This summer, the Office of the Dean of Students is using Baxter’s famously calming nature to help address frequently asked questions from incoming first-years. Together with Jack, Baxter is appearing in a series of new videos that explain how to deal with things like class registration, move-in logistics, and of course, when to high-five Dean of Students Allen Groves.

While CavDog and CavPup are the first furry faces to greet new students, returning classes and alumni know that there are many more four-legged friends ready to play fetch on Grounds.

Meet some of the other top dogs of U.Va.:

Gibbs visits with his Wahoo dog predecessors Seal and Beta.

Named for Mark Harmon’s rough-and-tumble character on the television show “NCIS,” the stately Gibbs is a regular at Rice Hall, home of the Engineering School's Department of Computer Science. He and his owner, computer systems engineer Rick Stillings, are often spotted on the Lawn during lunchtime.

Gibbs is a Patterdale Terrier, a rare breed in the United States. Despite his relation to more excitable dogs like Jack Russells, he’s always ready to relax on the grass with undergraduates and is happy to stand still whenever small children run up to pet him.

Engineering students and other visitors to Rice Hall can find Gibbs snoozing inside Stillings’s office about two or three days a week. 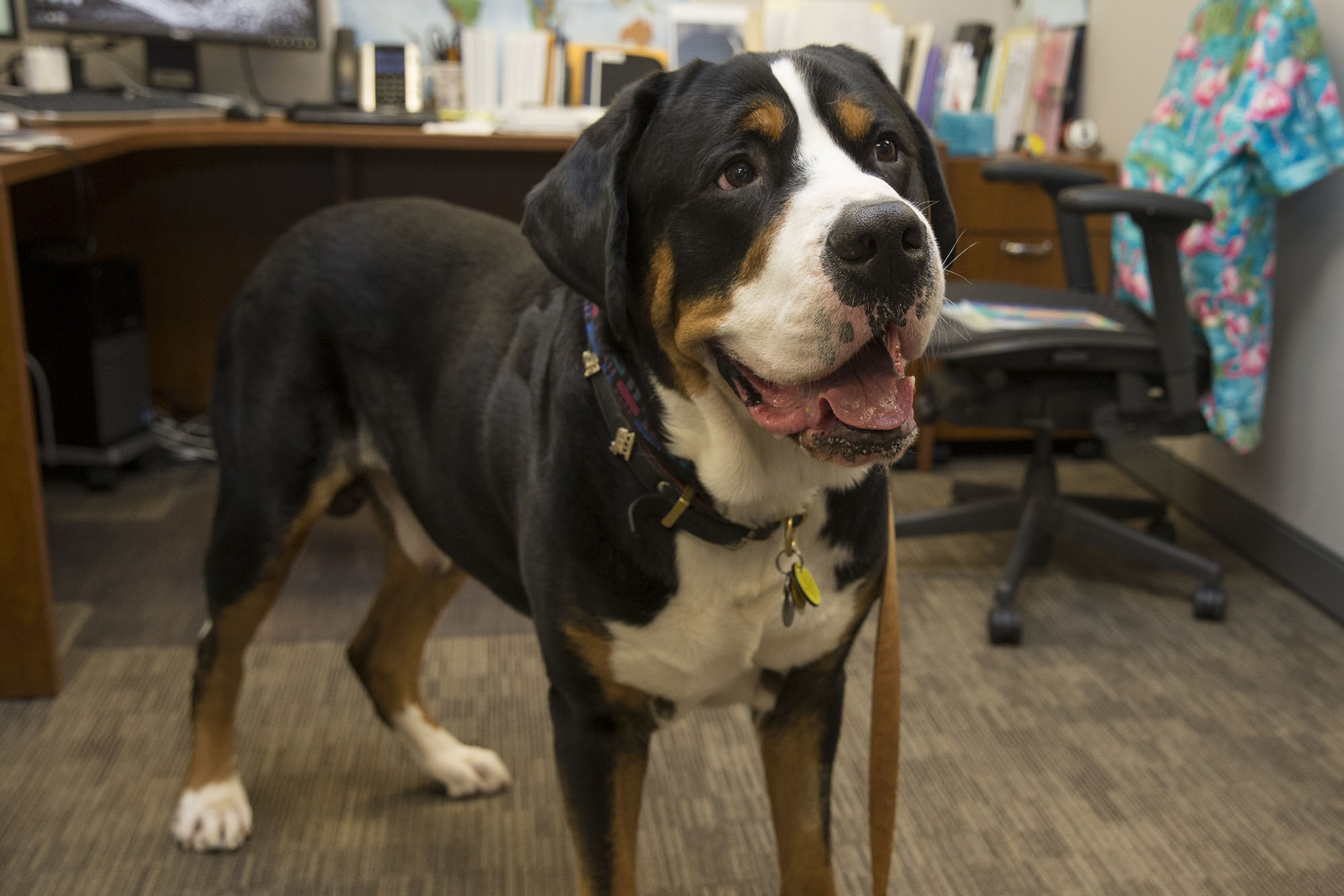 George the Greater Swiss Mountain Dog waits in his owner’s office before they head to the U.Va. Hospital for a visit.

George is a Greater Swiss Mountain Dog, best known for his infectious smile and his brush with fame as a 2012 “Best in Breed” winner at the prestigious Westminster Dog Show.

Already highly trained from his days as a show dog, George is always on his best behavior when he visits the Library Data Commons at the Curry School of Education with his owner, Nancy Kechner, a research software support and data consultant.

The Swissy’s calm demeanor in the face of heavy stimuli recently helped him earn his certification as a therapy dog. Now, he and Kechner volunteer once a week at the U.Va. Medical Center, bringing his soothing presence to a different floor of patients each time.

When the rugby season starts, George and Kechner can also be seen in Madison Bowl, coaching the U.Va. women’s club team. Kechner handles the plays while George is in charge of pulling the water cart. 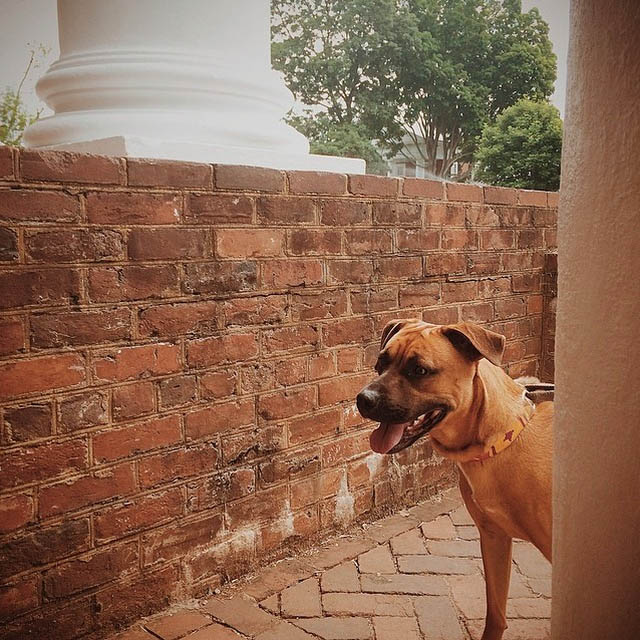 Sarah Mae, seen here in an image from the University's Instagram account, loves to visit with students.

CavDog and CavPup aren’t the only four-legged friends in Peabody Hall.

Visitors to the second floor may catch a glimpse of Miss Sara Mae, the sweet mutt belonging to Associate Dean of Students Aaron Laushway.

Sara Mae is a rescue dog from Fluvanna County and Laushway thinks that she is likely a boxer-labrador mix, with just a touch of Chinese shar-pei.

“She visits several times a week, and occasionally attends meetings with me,” he said. “She also very much enjoys the Lawn and considers it her playground.”

Sarah Mae loves to visit with students as she’s strolling through Grounds and is a master of the puppy eyes.

One look and it’s hard to resist giving her a scratch behind the ears.

What Is the ‘4th Side’? END_OF_DOCUMENT_TOKEN_TO_BE_REPLACED