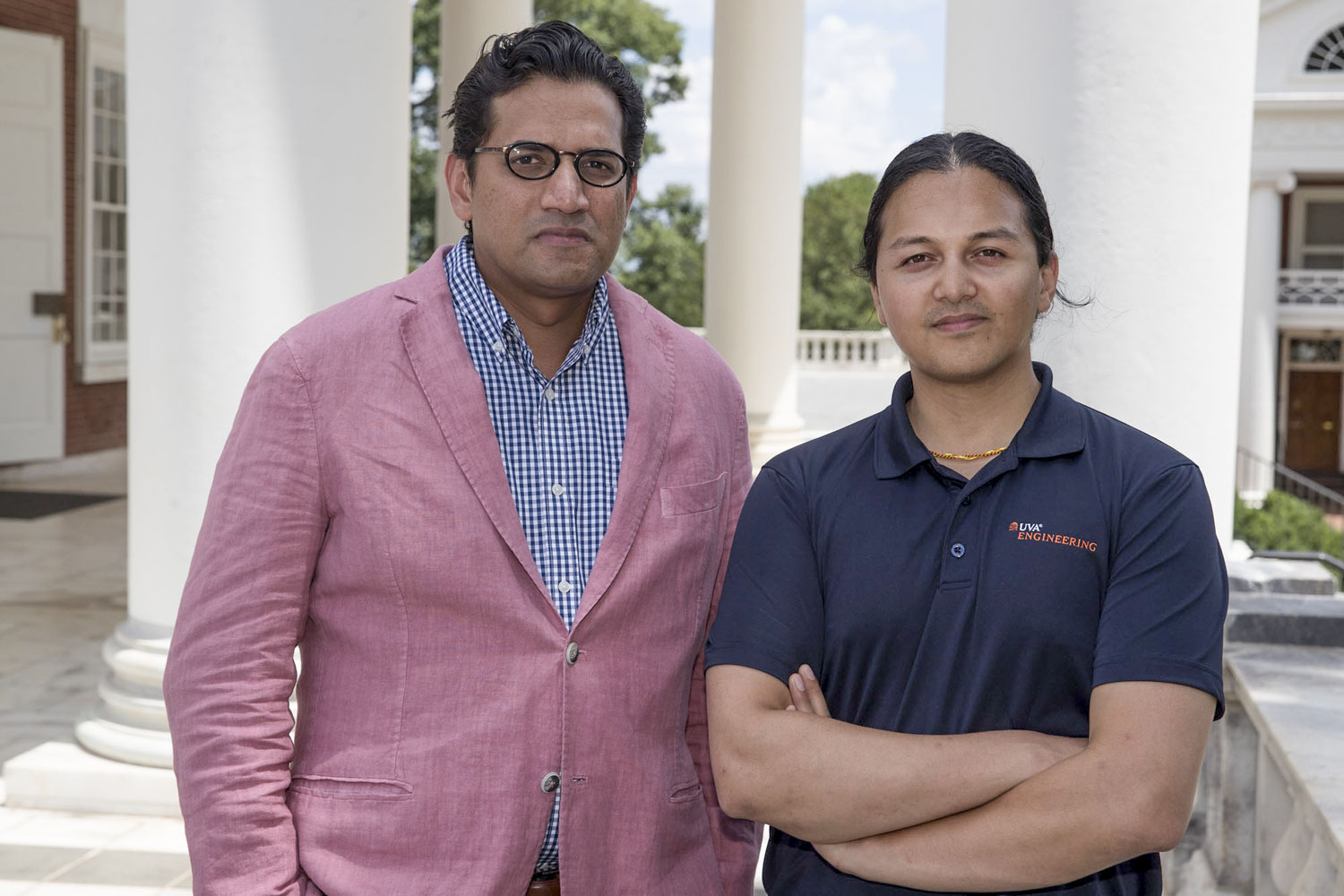 When Gaurav Giri returned to his native country, Nepal, two summers ago to get married, he should have been walking on air. Instead, he was getting sick from it.

Had the air in Nepal always been this difficult to breathe, or had it gotten worse since he had last been home?

“You just couldn’t drive through the city with the windows down,” recalled Giri, an assistant professor of chemical engineering at the University of Virginia, who has lived in the United States since he was 14 and had last visited Nepal in 2011. “The air pollution was just too severe.”

That’s when Giri got the idea.

At UVA, he had already been working with a relatively new material called “metal-organics frameworks.”

The material is known for its porousness, and Giri believed it could be used to make air filters that could be paired with the cloth masks that many people in Nepal were already wearing.

Realizing he was going to need somebody with a business background to get the idea off the ground, he partnered with Bala Mulloth, an assistant professor of public policy in UVA’s Frank Batten School of Leadership and Public Policy who is part of the school’s Social Entrepreneurship at UVA intiative.

That union has proved fruitful.

Giri and Mulloth said they know of no other masks in the world like the one they are making that are commercially available. They are expecting to have a prototype completed by the end of the year.

Initially, the masks will help people in Nepal. Long-term, Giri and Mulloth believe they can help people around the world.

“It’s not just a developing-country problem,” Giri said. “It’s also a problem in places we don’t think of – like in the U.S.”

“With climate change, it is inevitable that people in many countries will need to have an air filter mask,” added Mulloth, who is from India. “It’s just a matter of time.” 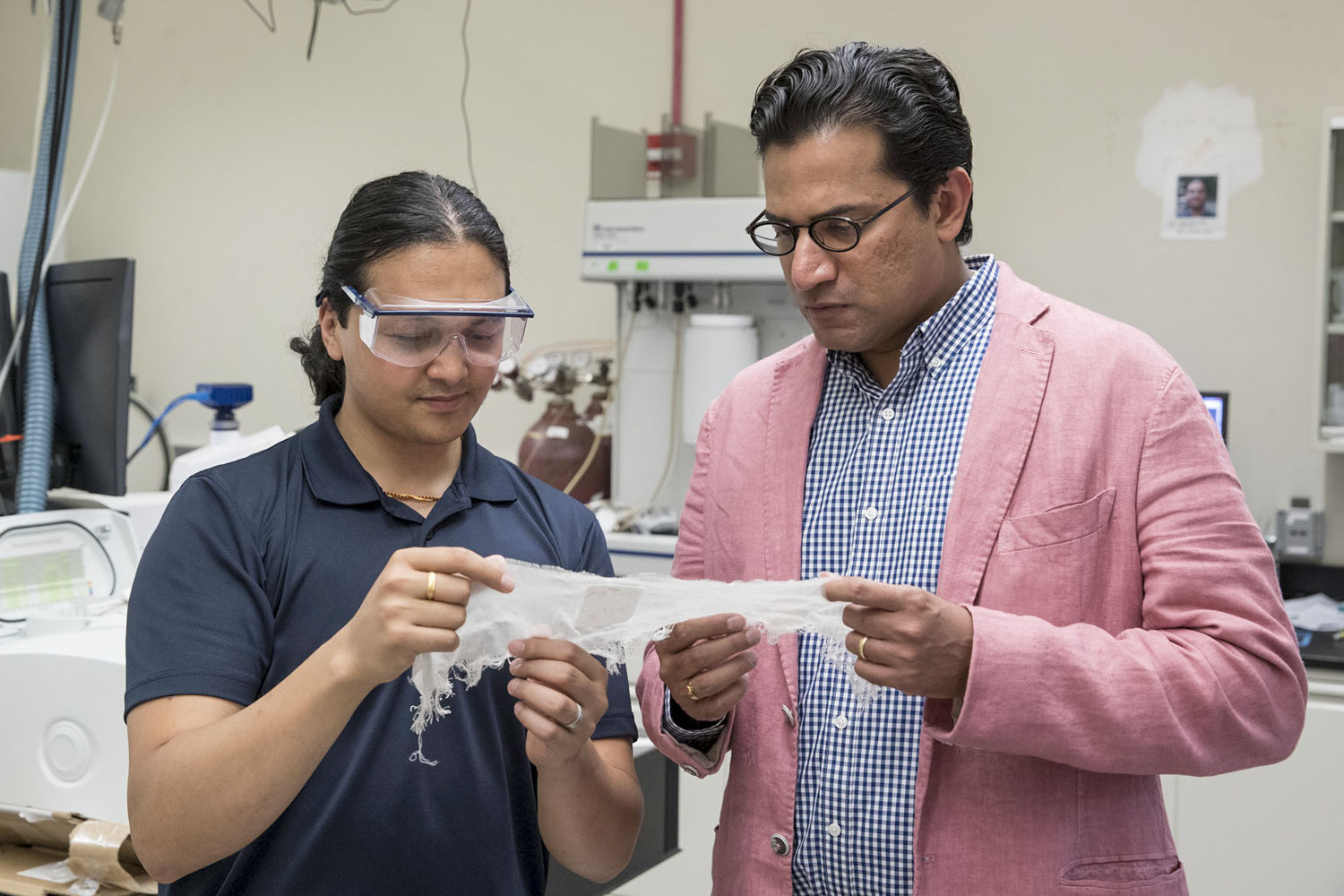 Giri and Mulloth believe their innovative air filter will be both effective and affordable.

In Nepal, Giri said the incomplete burning of fuels is one of the biggest contributors to the poor air quality. “When you go there, you see trucks with black soot smoke coming out. Those are partially burned carbons and if they are small enough, they go into your lungs.”

Giri said cheap masks currently used in Nepal don’t stop these dangerous particles from getting into people’s lungs, and expensive masks are not obtainable for most of the country’s population. Giri calls it an “end-of-life problem,” which studies have shown decreases life expectancies by roughly five years.

Giri and Mulloth’s idea is to attach their air filters to the already existing cheap, but ineffective, cloth masks, so that “instead of trying to change consumer habits, you’re still letting them have the same thing, but it’s actually effective,” Giri said.

Giri said one gram of metal organics frameworks has a surface area of a football field, making it a perfect choice for air filters.

“The size of the holes in metal organic frameworks are very small – so it prevents most particles from going in,” Giri said, “and the chemistry of the mask can also stop the more dangerous gases, like car exhaust.”

Another advantage of using metal organics frameworks is the cost.

“The analysis we have done shows the material cost to be about 10 cents per mask,” Giri said. “Producing the masks in Nepal should also lower the costs and make it affordable to the local population.”

Mulloth added: “We believe there is a lot of room for innovation in air filter technology, and as more people need air filter masks, it will become a lifestyle product, which is why design is so important to us. We want to make it like a brand. We want something that is aesthetically cool.”

Giri said UVA has been the perfect incubator.

“I think one of the biggest reasons is because it is such a multi-disciplinary institution,” said Giri, who earned his Ph.D. at Stanford University and did a post-doctoral fellowship at the Massachusetts Institute of Technology before arriving at UVA in 2016. “It’s not just people like myself focusing on science. It’s great to work with people who have a different skill set and a different focus.”

Giri said another rewarding aspect of the venture has been the speed at which everything has moved.

“In academia, most of my experiences have been like, ‘Oh, the science I’m working on might be useful in five to 20 years in the future,’” he said. “So it’s pretty awesome to see the work that I’m doing right now will be useful in the next year.”

Mulloth said the masks, which are in the process of being patented through UVA’s Licensing and Ventures Group, can be a “great equalizer.”

“You may be super-rich or super-poor,” he said, “but you’re still living in the same country and breathing the same air.”