By understanding how the virus works, researchers are a significant step closer to being able to stop Ebola – and perhaps other viruses with similar structures. 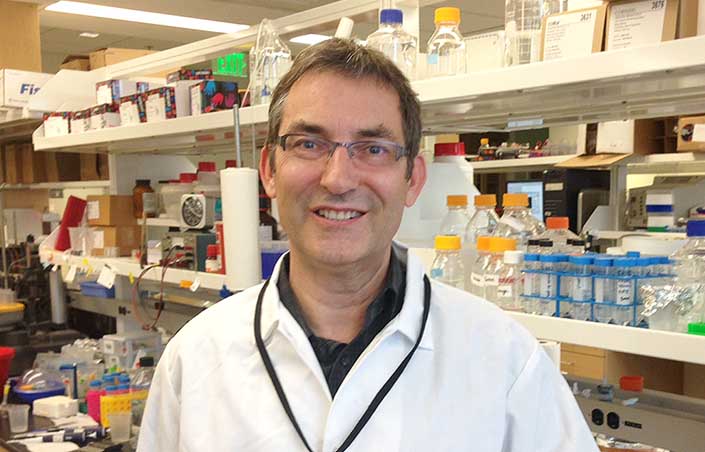 Researchers at the University of Virginia School of Medicine have discovered how the deadly Ebola virus punches its way into the cytoplasm of cells. The finding identifies an important target for blocking the infection process of this incurable disease that many fear may be used for bioterror.

Outbreaks of this extremely dangerous, highly contagious virus are now under way in the African countries of Guinea, Liberia and Sierra Leone. Ebola kills up to 90 percent of people who contract it. In addition to the toll on human life in the areas already affected, there is significant concern that it could spread elsewhere around the world, so finding ways to combat it is a global priority.

U.Va.’s new discovery offers important insight into how the virus works its way into cells. After the virus is engulfed by the cell, it is contained within a vesicle where it can do no harm. But Ebola quickly escapes the vesicle, and now scientists understand how. U.Va. researcher Lukas Tamm of the Department of Molecular Physiology and Biological Physics and his team discovered that the pH level inside the vesicle triggers the surface glycoprotein on the virus to form a “fist” that lets the virus punch its way into the cell’s cytoplasm, where it can effectively turn the cell into a factory for virus production.

“If it stayed in the vesicle, it would be not much of a problem. The cell could digest it,” Tamm said. “But then it escapes from that internal vesicle into the body of the cell, and that’s when the danger happens. It does that by fusing its own membrane with that cellular vesicle membrane, and that lets the RNA of the virus out into the cell to replicate, to basically cause havoc in those cells.”

Ironically, when the virus approaches a cell, what becomes the fist looks more like an outstretched hand. The U.Va. research explains how the virus forms its fist and identifies amino acids within the virus critical for the clenching to occur. “If you lose those,” Tamm said, “it would always be in the extended hand formation.”

To test his findings, Tamm turned to the School of Medicine’s Judith M. White, a researcher in the Department of Cell Biology who has developed virus-like particles that act like Ebola, but pose no danger in the laboratory. Working with those particles, they were able to verify Tamm’s hypotheses about the fist-clenching process held true not just in test tubes, but in live cells. Then they took the work even further, enlisting Dr. Peter M. Kasson of the Department of Molecular Physiology and Biological Physics to create a computer model of that process. The result is a remarkable new understanding of Ebola infection.

“It’s a very nice collaboration between structural, cell and computational biologists that shows how beneficial it is to have all these different areas of expertise here at U.Va., so that we can tell more of the whole story,” Tamm said.

By understanding that story, researchers are a significant step closer to being able to stop Ebola – and perhaps other viruses with similar structures as well.

“Once you have visualized the molecular shape changes that these structures undergo upon cell entry, you can see what molecules or potential anti-viral drugs could interfere with this process,” Tamm said. “You have these contacts that need to be made to make the clenching of the fist happen – if you could find a molecule that throws a wrench into the gears of that mechanism, you could actually block that from happening.”

The researchers have detailed the fist-clenching process in a paper published by the Journal of Virology. The article’s authors are Sonia M. Gregory, Per Larsson, Elizabeth A. Nelson, Kasson, White and Tamm.