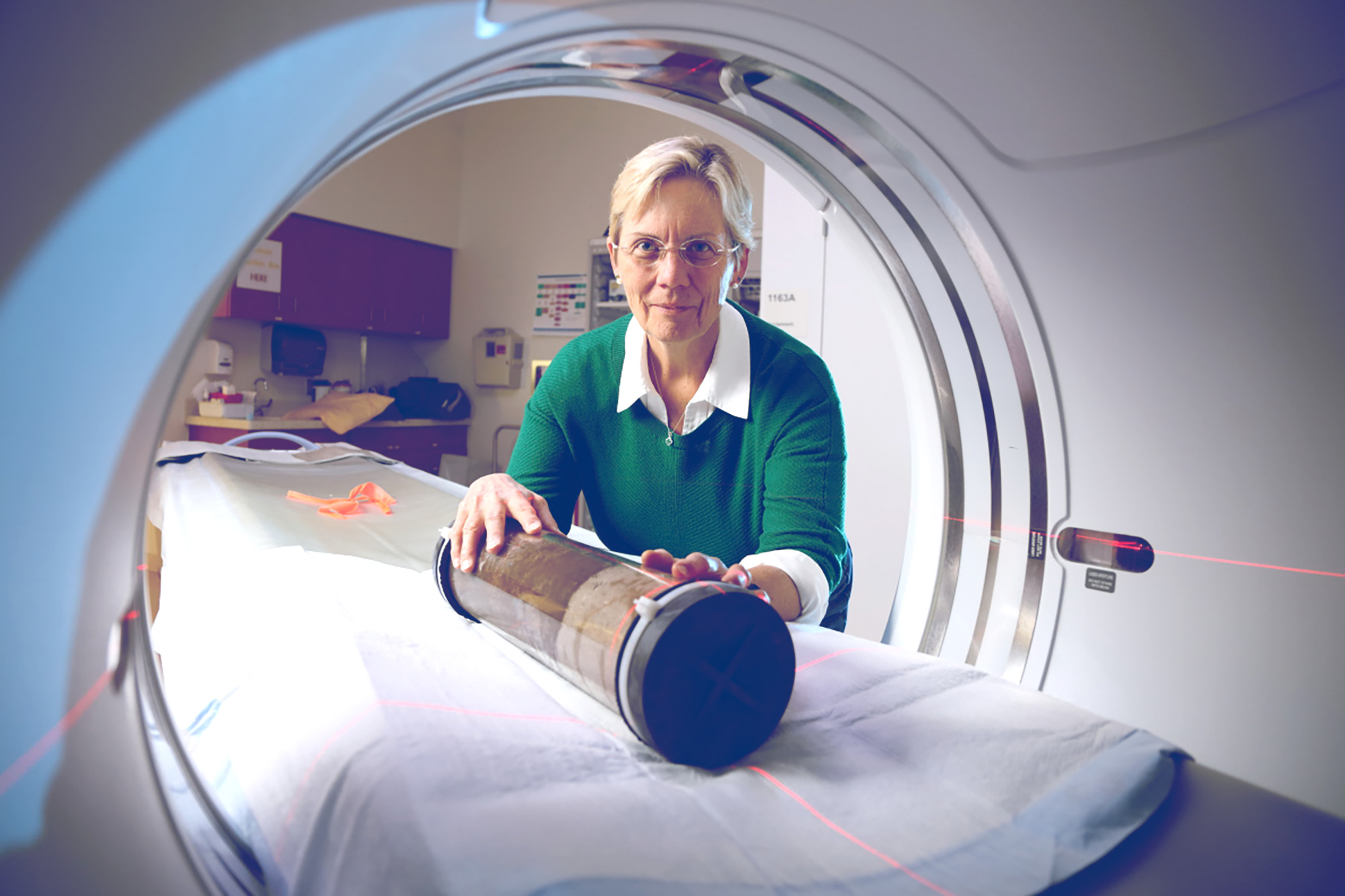 Anyone who has not spent time in a salt marsh may think of it as a hot, buggy, muggy, muddy, smelly, harsh and dismal environment – and that may be true, especially during the summer.

That’s even what Linda Blum, a University of Virginia environmental scientist, once thought – at least until the mid-1980s, when she began conducting long-term ecological research in salt marshes at the Eastern Shore’s Virginia Coast Reserve.

“I have found that instead of being dismal and uninviting, salt marshes are intrinsically beautiful,” Blum said. “They’re lush and green, and while they do sometimes have that rotten egg smell, they put food on the table by providing habitat for a wide range of organisms. I love salt marshes.”

So much so that she has dedicated her career to studying the grasses and ecosystems that thrive on mud banks in the back bays, sounds and lagoons behind barrier islands, in Virginia and elsewhere.

“Coastal marshes are wonderful ecosystems, serving as a buffer to protect the land from storm surges, and they slow the flow of freshwater coming onto the coasts, and they purify water by removing excess nitrogen,” Blum said. “These aesthetically pleasing habitats, with their biodiversity, provide great ecological services, so we should value and protect them.”

Marshes provide habitat for economically important aquatic and marine species from fish to crabs, clams and oysters. They also serve as cover and nesting sites for many species of birds and mammals. Salt marshes also capture carbon from the air and store it, helping to slow the rate of climate change.

Marsh grasses provide for much of their own growth through seasonal death and renewal, contributing organic matter to the soil on which successive generations can further grow and expand. Because they can grow under shallow, salty water and send up emergent stems, they play a crucial role in expanding and building up inner coastlands over time, by converting forests into rich marsh grasslands.

Blum said marshes are good at keeping up with sea-level rise – to a point – but can become overwhelmed if the waters rise too rapidly – as may be happening in the Chesapeake Bay region, where the land also is sinking, accentuating any natural or accelerated increases in mean water levels.

“A key question we are seeking to answer is: What is the maximum rate of sea-level rise that marshes can tolerate through soil accretion?” Blum said. “The marshes must be able to keep up by growing both horizontally and vertically as the seas rise.”

Root production is critical to this growth, she said.

“When marsh grasses can establish a strong root system, which goes down deep into the soil, they can send up more shoots and expand their range,” she said. “We’re developing new techniques in the lab for better measuring the volume of marsh grass roots, which provides clues to their capability for surviving rising waters.”

The traditional way to measure root production is to collect samples of the roots, soil, organic and inorganic matter below marsh grasses by taking core samples, using a polycarbonate tube six inches in diameter and 16 inches long. Back in a lab, researchers meticulously pick apart the sample, hand-sorting living roots, dead roots and rhizomes (below-ground stems from which roots and shoots grow) from mud, shells, debris and the like. Using this method can take a month to properly determine the root mass of a marsh grass.

Over the years, Blum has worked with numerous students tasked with this important, but tedious job.

But now, working with UVA’s Emily Couric Clinical Cancer Center, Blum has begun using CT scans to examine core samples. This reduces the process to just a day’s time, and Blum is finding that the highly detailed 3-D cross-section images are providing better data than the hand-separation method.

“I think we’ve nailed down this new approach,” she said. “We’re getting agreement between the hand-sorted samples and the CT scans.”

Using year-to-year sampling, Blum is gaining insights to the ability of marsh grasses to keep pace with sea-level rise under different scenarios.

“We’re finding that some marshes at our study sites are holding up well to sea-level rise, while others are not,” she said. “Over time, using new methods, we’ll gain a good understanding of why.”

Here Is What You Need to Know About the New Coronavirus Variant, Omicron END_OF_DOCUMENT_TOKEN_TO_BE_REPLACED

Fall Is in the Air on Grounds END_OF_DOCUMENT_TOKEN_TO_BE_REPLACED

Meet the Cats and Dogs Your CVC Donation Supports END_OF_DOCUMENT_TOKEN_TO_BE_REPLACED