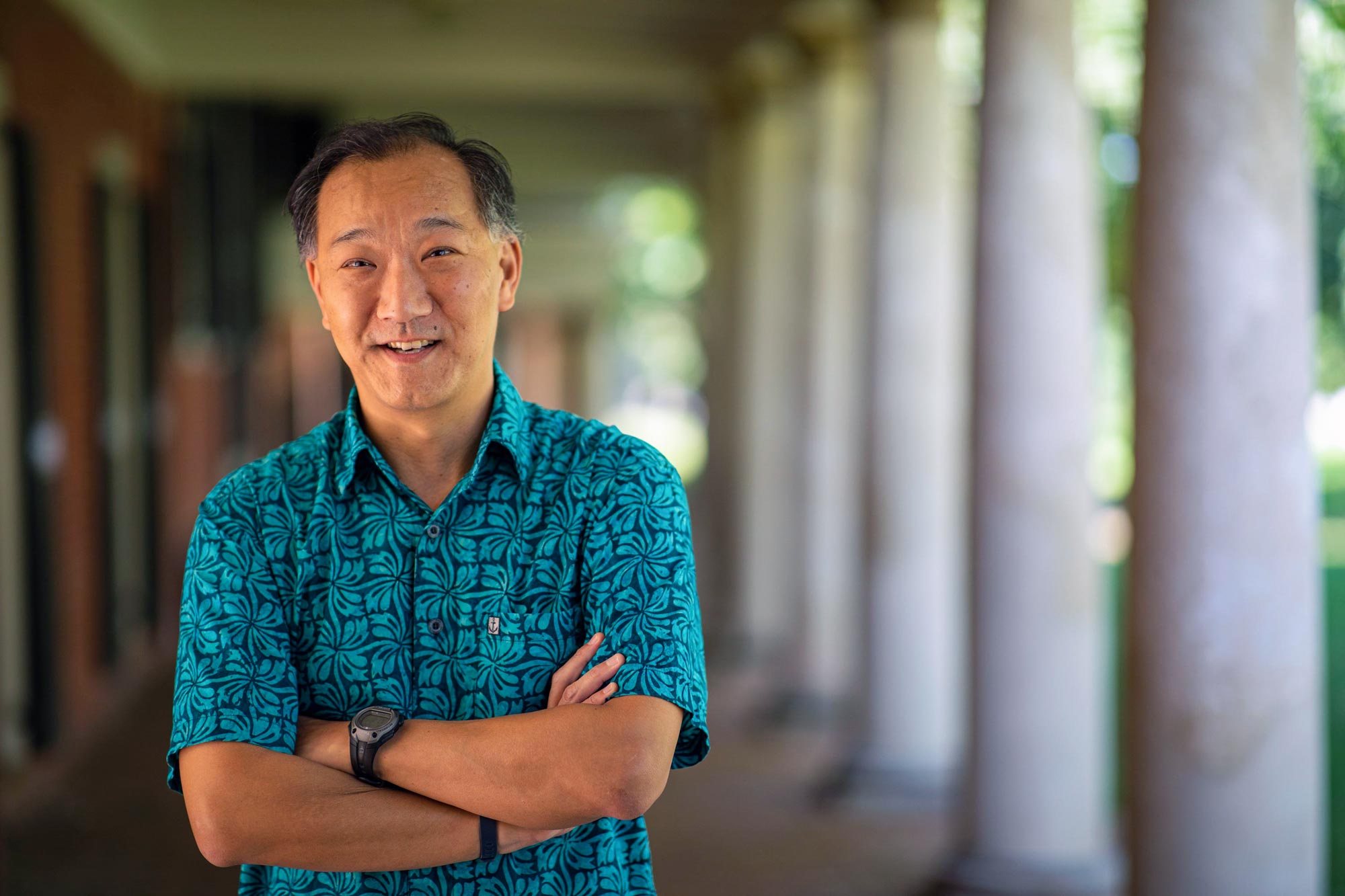 University of Virginia math professor Ken Ono had one day to box up the most special things from his office, load them into his car and get himself to New Jersey. Among the items Ono hurriedly packed was an award he received from President Bill Clinton at a White House ceremony in 2000 and several framed UVA research accolades that had been hanging on his wall.

The possessions would adorn a new, make-believe office some 350 miles north of Charlottesville.

UVA’s Thomas Jefferson Professor of Mathematics, the chair of the College of Arts & Sciences’ Department of Mathematics, was just taking a two-day break to star in a new Miller64 beer commercial that debuts this week in the lead up to Super Bowl Sunday.

To borrow a phrase from UVA President Jim Ryan, “Wait, what?”

“It was a very fun experience,” Ono said. “It had been a number of years since I had been around a film set. It was great to be around that kind of energy and excitement.”

No, this wasn’t Ono’s first rodeo.

Over the years, when he hasn’t been solving some of the world’s most complex math problems, Ono has found time to dip his toes into the film and television world. Ono has been in several documentaries airing on the History Channel and National Geographic, and he served as a producer on “The Man Who Knew Infinity,” a film starring Dev Patel and Jeremy Irons in which Patel played a mathematician during World War I.

It was with this and his math reputation in mind that Ono – who has his own Internet Movie Database page – believes a casting director reached out to him about two weeks ago.

“I got a call out of the blue, and like three days later, we were filming,” said Ono, whose list of hobbies includes swimming, running, cycling and scuba diving.

The director of the commercial, Julian Pugsley, wanted to recreate Ono’s actual office on a set in Morristown – which is what led to Ono packing up all his stuff.

The commercial is playfully centered on the fact that Miller’s 64-calorie beer has less calories than the new 80-calorie Bud Light NEXT.

The one-minute ad is filmed in a documentary style, and Ono is front and center. It begins with Ono standing near a chalkboard that, with complex math problems scrawled on it, looks like something out of the film, “Good Will Hunting.”

Ono introduces himself, and then shares a few highlights from his math career.

“There was no script,” Ono said. “I had no lines that I had to memorize. They just said, ‘Be yourself and we’ll see what we get.

“I was never fully sure what the outcome would be until I got the rough cut.”

While Ono is talking, you can catch a glimpse of one of the UVA awards that he brought with him from Charlottesville.

“Mathematics is everywhere,” Ono says during the ad. “It will play a very important role for advancing the human condition. … I would like to restore the value in science and education, and I hope to be remembered as someone who tackled and solved difficult math problems.”

At that point, the interviewer – whose voice you may recognize from Dorito’s commercials – interjects.

“So we’re having some trouble determining the answer to this equation. What number is smaller: 80 or 64?”

“What makes this piece funny, I think, is that we are recognizing the importance for having people, scientists and educators who think about difficult problems,” Ono said. “They could have hired an actor to be a mathematician, but they went out of their way, for whatever reason, to pick me – a real-life living mathematician – and I appreciated that.

“But I said, ‘If you’re going to make this joke, what might make this joke better, or at least more meaningful to me, is if you get in that line where I say it’s important that we restore value in science and education. Maybe that line sounds out of place, but I told them that line is very important to me. I think it’s a message that we need to reinforce.”

The only thing that worried Ono about the project was having to be away from the UVA math department for two days.

“But most of my work is theoretical – I can do it anywhere,” Ono said. “So when I was driving in the middle of rural Pennsylvania, I was able to get some work done.

While the ad is only expected to run in the lead-up to the Super Bowl and not during the actual game, Ono – whose daughter is a second-year student in UVA’s School of Law – said he will still have fun watching the clash between the Cincinnati Bengals and Los Angeles Rams with friends and family.

“I’m going to be rooting for Cincinnati,” Ono said. “My brother was formerly the president of the University of Cincinnati, and so in homage to that I will root for the Bengals because I know he will be as well.”

What Is Biotechnology? Where Is It Headed at UVA? END_OF_DOCUMENT_TOKEN_TO_BE_REPLACED