Experts at American Democracy Conference Outline Challenges For Democrats in 2014 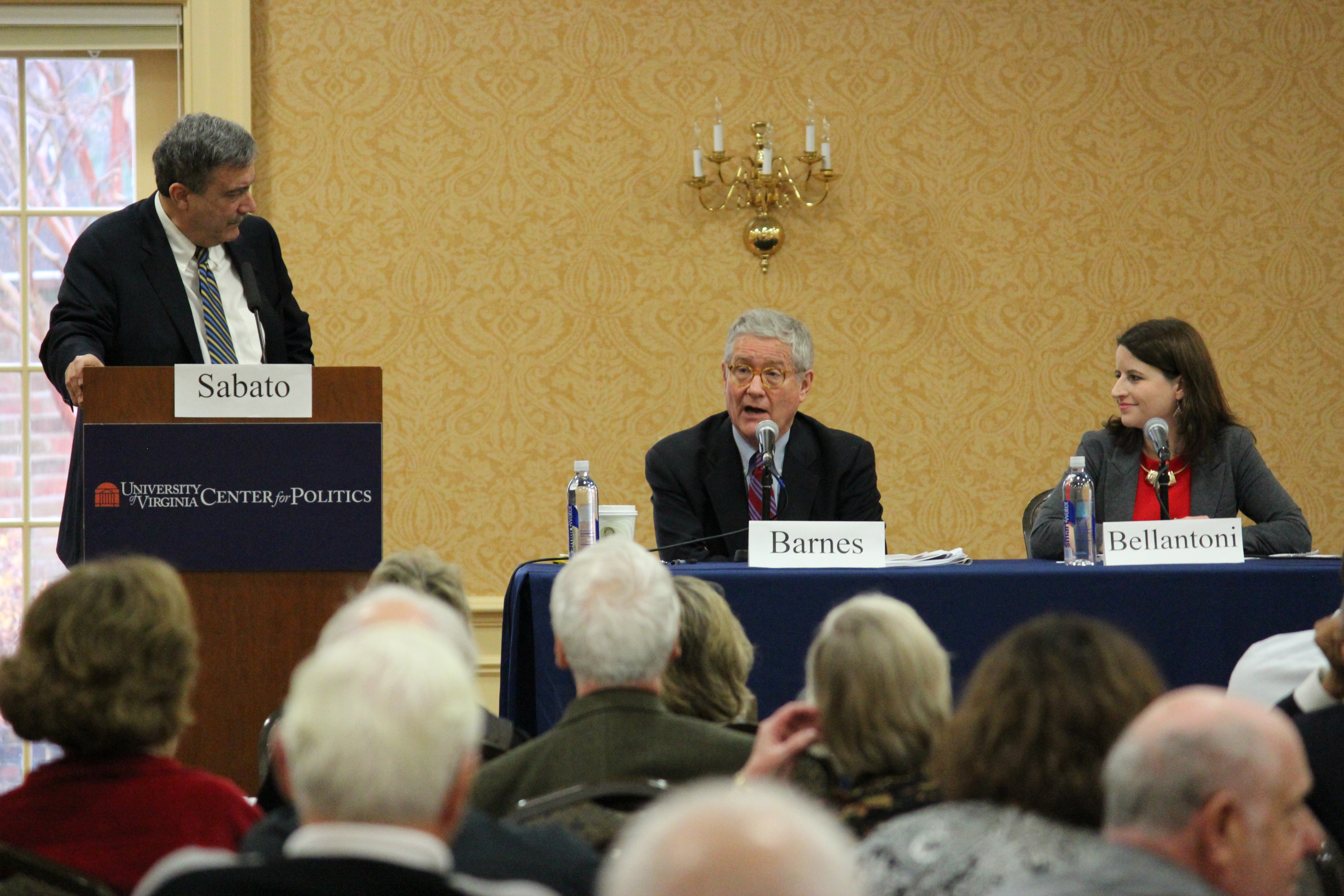 In the wake of the troubled rollout of HealthCare.gov, President Obama’s approval ratings have slipped from the mid-40 percent range to the high 30s. If his approval ratings don’t rebound by the 2014 midterm elections, the Democratic Party could lose control of the Senate, making Obama’s final two years a truly lame duck administration.

Those were just a few of the insights shared Friday at the University of Virginia Center for Politics’ American Democracy Conference, held at U.Va.’s Alumni Hall.

Center for Politics director Larry J. Sabato moderated a panel discussion on the 2014 midterms at the 15th annual conference, which drew more than 100 audience members.

When Sabato polled the five nationally known panelists, none thought the Democrats had even a 25 percent chance of retaking the House of Representatives in 2014, which would require a net gain of 17 seats to reverse the Republicans’ current 234-201 majority.

Christina Bellantoni, political editor of PBS “NewsHour,” was the only panelist to suggest Democrats might make any gains in the House. She theorized they could pick up eight to 12 seats by capitalizing on vulnerable Republican incumbents in blue-leaning districts and incumbent retirements.

Conversely, several panelists suggested the Republicans had a good chance of gaining Senate seats, perhaps even retaking control of the Senate in November, where they need a net gain of six seats. Seven incumbent Democrats are up for reelection in 2014 in states that voted for Mitt Romney in 2012, including Arkansas, North Carolina and Alaska.

Sunday talk show regular Fred Barnes, executive editor of The Weekly Standard, pointed out that this will be the third consecutive election in which Republicans are poised to win control of the Senate. As in the past two, the 2014 election results will hinge on whether the Republicans field good candidates.

“Their chances are pretty good,” said Brit Hume, a senior political analyst for Fox News, former chief White House correspondent for ABC News – and Barnes’ roommate at U.Va. in the 1960s. “But you can’t rule out the chance that the GOP candidates will look like” the famously rough denizens of the cantina bar in “Star Wars,” he said, drawing a laugh from the audience.

There is high potential for such a result, agreed Dahlia Lithwick, senior editor at Slate and a contributing editor at Newsweek. But, “barring a panoply of crazy, they could retake the Senate.”

If Obama’s approval ratings are still below 40-percent on Election Day, Republicans will retake the Senate, predicted Michael Toner, former chairman of the Federal Election Commission.

“Alaska and North Carolina will be key states. Both are very red, with adroit Democratic incumbents,” he added, referring to Mark Begich and Kay Hagan.

Barnes agreed, but he went on to say the Republicans probably won’t win the Senate, because Obama’s approval ratings will probably be in the 40s again by Election Day.

After offering the caveat that “24 hours can be a lifetime in politics, so there’s no telling what may happen,” Hume laid out why he predicted the Obamacare rollout issue would continue to plague Democrats for many months to come.

“The rollout of Obamacare has brought about a reversal of approval ratings in the polls that is bigger than anything I think I’ve ever seen,” he said.

Hume noted that there is still a question whether anyone has actually been successfully billed for the policies they have purportedly signed up for on the Obamacare website. Many business leaders have privately shared back-of-the-envelope calculations that are prompting them to consider dropping existing employer health insurance in favor of simply paying the Affordable Care Act’s penalties, which they said would be substantially less expensive.

He said that on Election Day in 2008, 40 percent of voters said the economy was their top concern, while only 5 percent cited health care. In polls at the time, 80 percent said they were happy with their health care, and 65 percent said they were happy with their insurance. So the public sentiment demanding health care reform was fairly weak, and satisfaction levels were high enough that by opting to reform health care, Hume said, “You’re liable to knock over a hornet’s nest. And that is what’s happening.”

What’s more, according to polls examining the health care reform proposals and claims of Obamacare, “nobody believed any of the claims, except two-thirds of people believed the pledge that you can keep your doctor and your insurance policy.”

“Well-known broken promises have a long half-life in politics,” Hume said, citing George H.W. Bush and his infamous failure to uphold his “no new taxes” pledge.

“It’s a fact of political life that negative emotions drive political elections more than positive,” he added. “The drive for change and protest is such a powerful political motivator. That’s why Obamacare is likely to be so powerful.”

In contrast, “The shutdown won’t have a major impact on House elections in 2014.  Just as it didn’t last time around,” Hume added, referring to the 1996 elections in the wake of the 1995-96 shutdown, when House Republicans had three seats shaved off their majority.

Bellantoni disagreed. “Lots of states and seats in play are not marginally competitive, so the Obama stuff won’t matter,” she argued.

If the Republicans do gain the six Senate seats needed to retake the Senate, they will simply be matching the average gains in the Senate for the out-of-power party in the sixth-year election of a two-term president, Sabato noted.

Full video of the conference will be posted on the Center for Politics website.

What’s Next for UVA’s Class of 2022? END_OF_DOCUMENT_TOKEN_TO_BE_REPLACED