Experts Recommend How Everyone Can Help Prevent Gender Violence 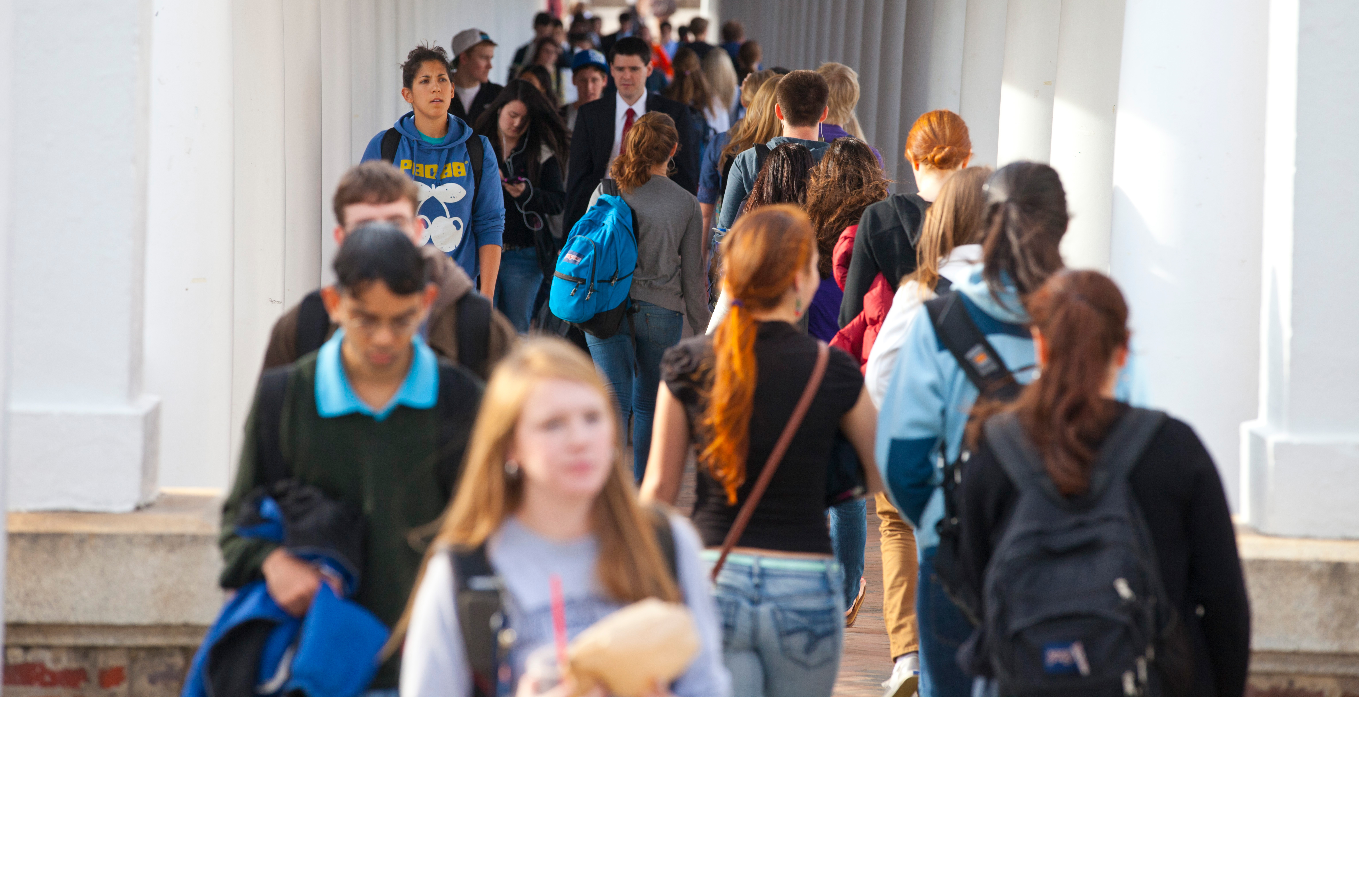 “There are many wonderful things about being a university president,” she told a crowd of more than 300 students, faculty members, administrators, staff and community members gathered in Ern Commons. “There are also things that keep you awake at night. Tonight’s topic, gender violence, certainly falls into the latter category.”

Dorothy Edwards, a psychological counselor who specializes in prevention of gender violence, and attorney Gina Maisto Smith, a legal expert in university policy related to sexual misconduct, led the conversation and fielded questions.

After opening remarks from Sullivan and Stephen Nash, who chairs the U.Va. Honor Committee, mediator Frank Dukes, director of U.Va.’s Institute for Environmental Negotiation, moderated the discussion, stopping at several points to have people discuss questions with the person sitting next to them.

Putting the problem in context, Sullivan said, “We all know that gender violence, bias and abuse are national and global problems. They are problems at colleges and universities across the country – both large and small, public and private, urban and rural. The University of Virginia is no exception.”

Smith said there’s been too much silence around the issue, and it’s important to bring it out from under the rug and talk about it, as well as make it part of ongoing education. A former prosecutor for 20 years, she has worked with colleges and universities around the country for the last seven years to improve their policies, procedures and investigations on matters of sexual misconduct.

“I learned that institutions struggle to be fair. ... It’s not that they don’t care,” Smith said. Implementing the process is the hard part, especially helping students get through the aftermath of an incident.

Smith and Edwards both discussed the influence of alcohol consumption in sexual violence. Though the behaviors are highly correlated, drinking doesn’t cause violence, Smith said. A victim might feel she’s being blamed if asked whether she had been drinking, but Smith said it must be asked as part of an investigation.

She recommended thinking about it like drinking and driving; young people know that’s a dangerous situation and have strategies to prevent friends from getting behind the wheel.

Edwards said students, as bystanders, should be on alert when a lot of drinking is going on. She recommended friends talk about it ahead of time – that they’ll look out for each other and what they might do if they see someone acting inappropriately.

Edwards – the founder and executive director of Green Dot, etc., a center dedicated to effective intervention and prevention of personal violence – has worked on this issue for about three decades. It isn’t enough to give students, some of whom might be potential perpetrators or victims, a list of don’ts – “don’t rape, don’t disrespect women, don’t walk alone at night, don’t drink alcohol from an open container,” she said. It is important to be realistic.

For every potential victim and perpetrator, there are many more bystanders with the potential to intervene, she pointed out. Such intervention can take many forms – not only acting directly to stop a potentially bad situation, but perhaps just asking someone else to help, or even creating a distraction.

One example she gave involved a male partygoer – violence is a human issue, not just a women’s issue, she noted, and men should be included as part of the solution – who saw a male friend leading an obviously drunk young woman upstairs. Thinking quickly, he shouted to him, “Man, your car is getting towed!” That brought the young man downstairs, and some girlfriends went to help the young woman. A potential sexual assault was averted.

“What is the one small thing you could do, given your own human limitations, to make a difference on this issue, to make it less likely to happen?,” Edwards asked. “Everyone can do something. No one has to do everything.”

If a person has been sexually assaulted, it’s crucial to go to the hospital for preservation of evidence, Smith said. For instance, if the victim was drugged, that evidence only stays in the body for several hours; if detected, the crime is handled as a felony, she pointed out. While going to the hospital doesn’t commit the victim to a course of action, not going could limit the case to one person’s word against the other.

In response to another question, both speakers said schools should provide different access points to resources for marginalized populations, such as gay students, because their history and issues might be different.

Another student expressed concern about the need for transparency about gender violence reports. That is limited because of confidentiality issues, Smith said, but there could be reporting that an incident occurred and follow-up action is being taken. In campus adjudications, she said administrators must address expectations and make sure the students get support and access to resources throughout the process and afterward. She cautioned against jumping to conclusions without all the facts and also called for more education to understand the effects of trauma on individuals.

Although awareness about sexual violence and misconduct is part of student orientation, Edwards suggested continuing education for upper-class students who “carry the most social influence.” New students learn about the campus culture from other students and may not feel confident enough to speak up if they’re new. Older students can help establish an atmosphere of intolerance toward sexual violence and misconduct, she said.

Faculty and staff, being more permanent than students, can also contribute to building a safer community in a variety of ways, such as incorporating sexual violence issues into class assignments or posting tips about bystander responses in classrooms and offices.

After the event, Dean of Students Allen Groves said the experts gave him ideas for new strategies he hopes his office will explore. “We can rethink training, education and support,” he said, especially a broader base of training that’s not just for first-year students.

Sullivan said U.Va. administrators have been working on the policy side. “I do believe we have made progress, but the change we want to achieve will continue to take very hard, concerted work.” She mentioned that the second- and third-year class councils have revived “Let’s Get Grounded,” a bystander training program.

The Vice President for Student Affairs office sponsored the event, and it was endorsed by the U.Va. Women’s Center, the Faculty Senate, the Shelter for Help in Emergency, the Sexual Assault Resource Agency, and several student organizations: Sexual Assault Leadership Council, Feminism Is For Everyone, Sexual Assault Peer Advocates, Sexual Assault Facts and Education, One in Four, the White Ribbon Campaign, Student Council and the Honor Committee.

For information, visit the Sexual Violence Education and Resources website. A video of the event will be posted there within the week.

Class of 2020: Memories and Moments From a Long-Anticipated Celebration END_OF_DOCUMENT_TOKEN_TO_BE_REPLACED