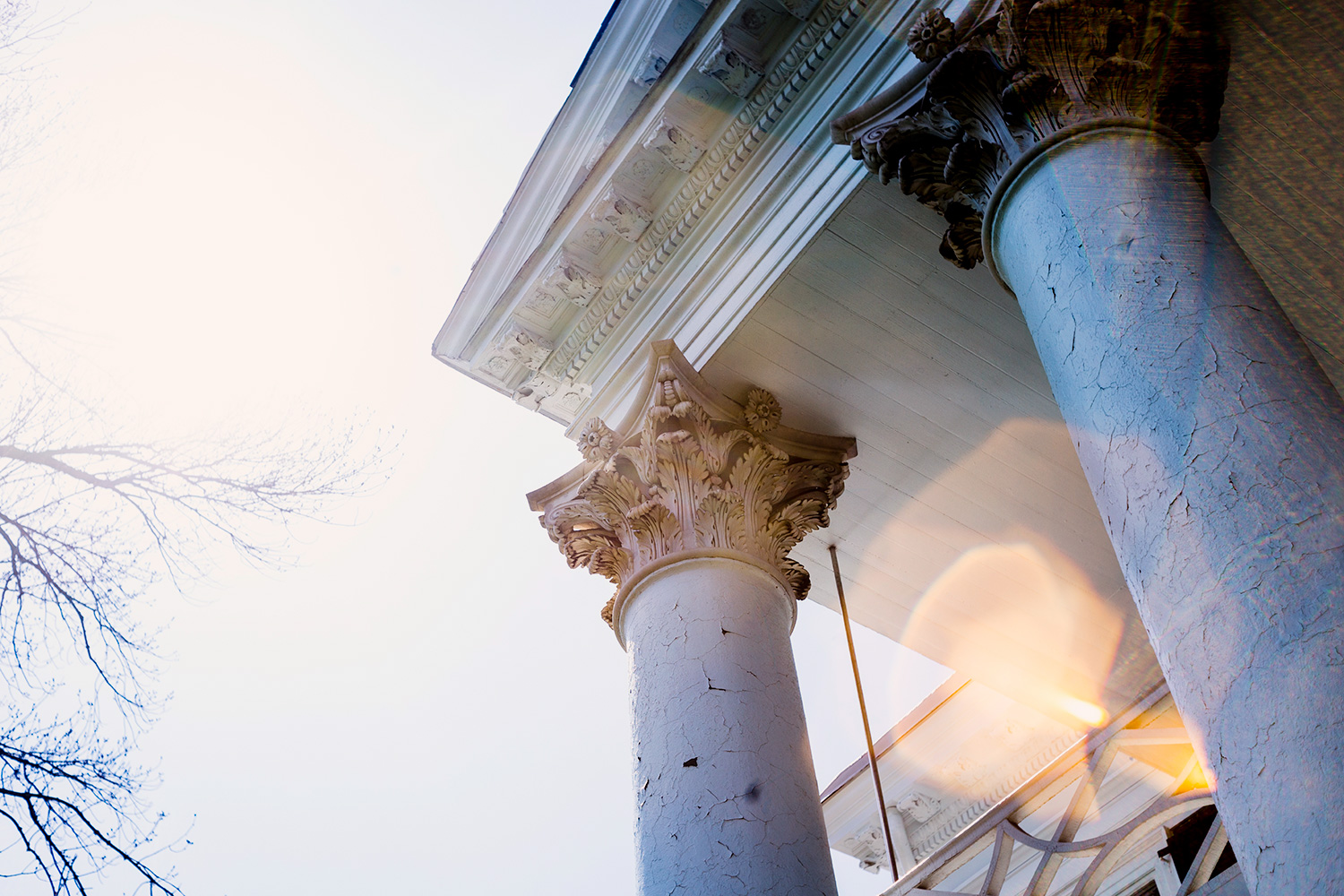 Crews have begun renovating the faculty residence in University of Virginia’s Academical Village, work that will include cleaning the capitals, replicating the first roof and restoring an original design element – a balustrade on the roof.

“Pavilion III is one of the two pavilions on the Lawn that have never had a major addition; however, it has had a major design element removed,” said James D.W. Zehmer, historic preservation project manager for UVA’s Facilities Planning & Construction Department. “Jefferson’s original design for his ‘Corinthian Pavilion,’ modeled on Palladio’s typical Corinthian order, included a balustrade on top of the roof.”

The mahogany balustrade – essentially, a decorative railing – will run the length of the roof, and will be about three feet high. Zehmer said the original balustrade, which was probably made of heart pine, was removed sometime the last quarter of the 19th century. 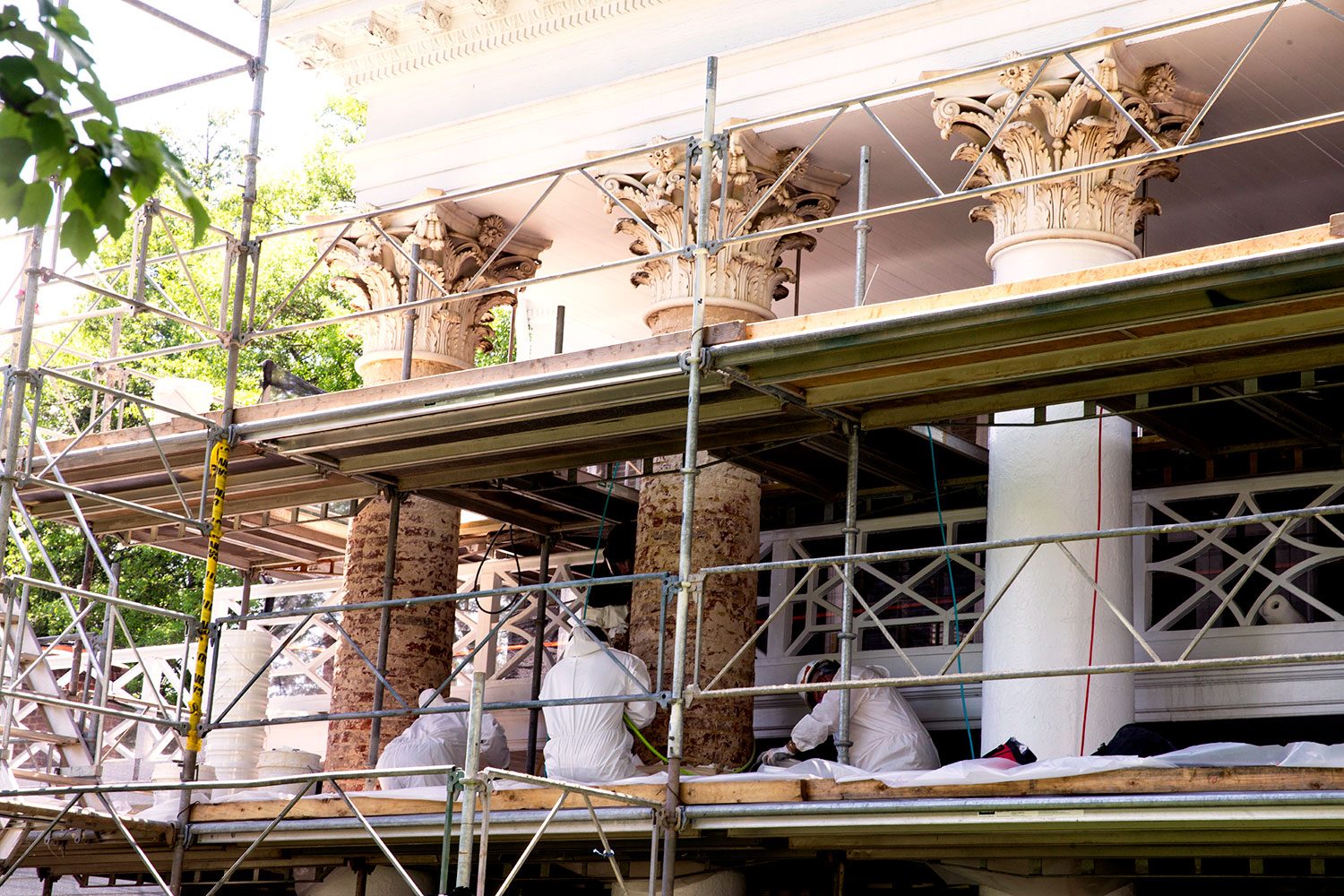 “We don’t know exactly why it was taken down, but most likely it had deteriorated and was causing damage to the roof,” Zehmer said.

University officials do not know why the railing was not replaced when it was removed, but Zehmer said the piece was part of Jefferson’s original design.

Jefferson’s original drawings and accounting memos, and historic photographs, bolster the physical evidence under the pavilion’s roof and in the attic that Jefferson had a balustrade installed on the roof. The University hired Mesick, Cohen, Wilson, Baker Architects of Albany, New York, to design the replication of the balustrade. The firm has experts in Jeffersonian architecture and experience in designing the balustrade restoration at Jefferson’s home at Monticello, which bears many similarities to the balustrade at Pavilion III.

The architects scanned the roof, attic and exterior of the building, then aligned their scans with historic photographs to accurately proportion the design for the missing feature.

Restoring the balustrade is part of a complete roof replacement for the pavilion.

“The existing roof is a standing seam, galvanized metal and slate,” Zehmer said. “We will be replacing it with flat-lock metal on the low-slope roof and tin-plate shingles on the higher pitched roof.  This will effectively replicate the original appearance of the roof.”

Pavilion III’s columns also will be repaired. The column shafts are made of brick and are covered with a layer of modern, portland-cement stucco. This coating does not allow for the column to breathe properly, thus trapping water beneath the surface and eroding the hand-molded brick and lime mortar beneath. The University’s historic masonry crew will carefully remove this outer stucco and use a new lime-based application on the columns.]

“During the removal process, we will carefully look for any evidence of the original finish,” Zehmer said. “The final appearance will depend on what is found at Pavilion III.”

At the same time, Material Conservation Co. Inc. of Philadelphia will clean and repair the pavilion’s 1820s-era Carrara marble capitals and bases.

“This is part of regular maintenance, cleaning and stabilization,” said John Carr, principal conservator at Material Conservation. “We will be bringing a quiver of cleaning techniques. Sometimes we will use a laser, or we may use a toothbrush with distilled water, or we may apply a chemical poultice.” 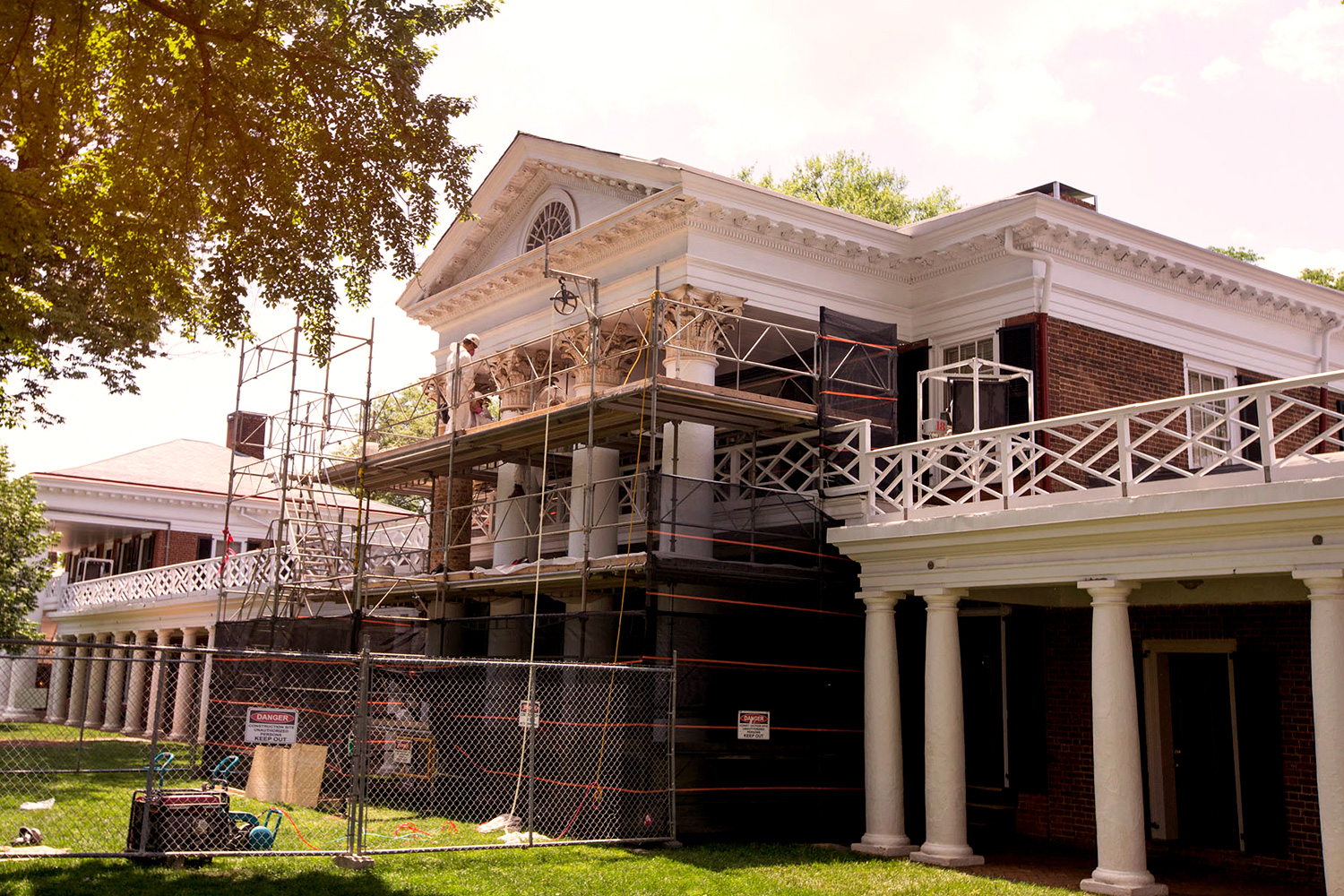 Carr said they will examine each capital to determine what it needs, especially underside areas not washed by the rain, where pollutants may accumulate and bond with the marble.

“The University is being very proactive with this sort of work,” Carr said, noting that his firm is often called in for restoration after something has been damaged. “This is a sign of good stewardship.”

Carr’s firm has worked on several buildings on the Lawn, including Pavilions II and X and Old Cabell Hall. Leigh Hassler, a 2000 graduate of UVA’s School of Architecture, will lead Material Conservation’s team, Carr said.

Crews also will renovate the pavilion’s kitchen and bathrooms , Zehmer said. The interior work will be completed in the summer and the exterior work will extend into the fall.

What Is the ‘4th Side’? END_OF_DOCUMENT_TOKEN_TO_BE_REPLACED