One of the country’s top collegiate backstroke swimmers holds on to the edge of the pool at the University of Virginia’s Aquatic & Fitness Center. With a device for measuring acceleration strapped to his waist, the Cavalier swimmer waits while a team of researchers led by math professor Ken Ono makes a final check of the equipment that will record every aspect of his performance in the water.

When the starter shouts “On your mark, go!,” the first-year swimmer kicks off of the wall into a long underwater glide.

Barely containing his excitement, Ono paces the pool deck as the swimmer breaks the surface of the water with a long, efficient stroke that could carry him as far as the 2024 Olympics.

“The school record for 100 yards is about 45 seconds,” Ono says. “If he can make this length in 11, that will really be something.”

When the swimmer touches the far wall, Ono checks the result on his watch. 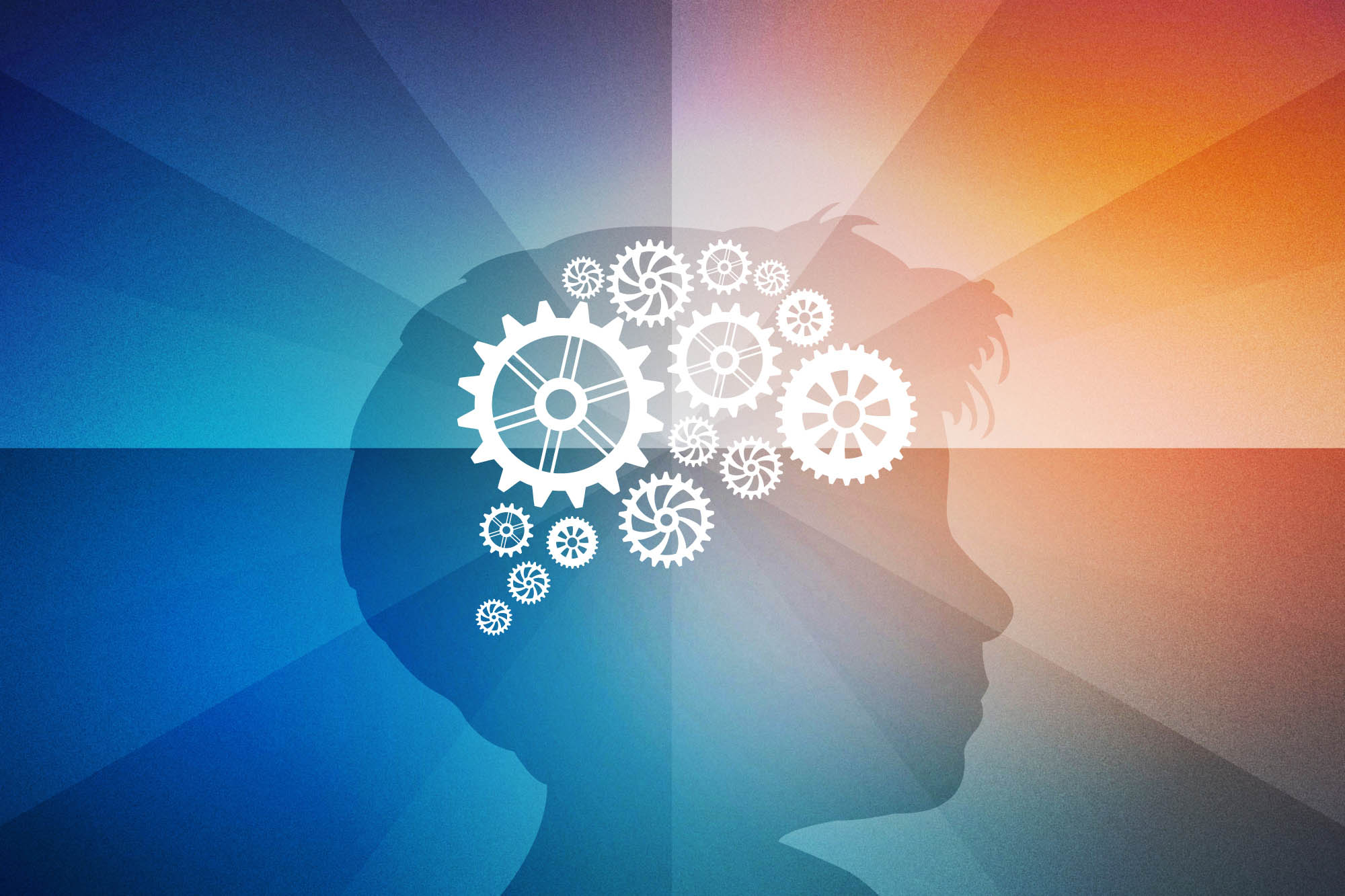 “Didn’t make it,” says Ono, UVA’s Thomas Jefferson Professor of Mathematics and chair of the College of Arts & Sciences’ Department of Mathematics.

Even though he’s a huge fan of the sport of swimming and of the UVA swim team, the result doesn’t dampen his enthusiasm for the swimmer’s effort.

The key to making swimmers faster is to approach it like a math problem, Ono explains. And if that’s the case, then Ono is particularly well-suited for the challenge; he’s one of the world’s leading mathematicians.

Science in the Swimming Pool

In the classroom, Ono specializes in number theory and studies highly abstract problems involving patterns and properties of numbers that have perplexed mathematicians for centuries. His work has earned him coveted Sloan, Packard and Guggenheim fellowships, as well as leadership roles as vice president of the American Mathematical Society and as chair of the Mathematics Section in the American Association for the Advancement of Science. In 2020, Academic Influence named him one of the world’s 15 most influential mathematicians, and Ono won the Presidential CAREER Award and was named a Distinguished Teaching Scholar by the National Science Foundation.

His work has been used by cryptographers and physicists studying black holes and quantum gravity, but it is also helping transform UVA into a collegiate swimming powerhouse and its athletes into leading contenders for gold in the 2024 Olympics, and it’s highlighting how an endowed chair can be an important ingredient in faculty innovation.

For the world’s elite collegiate swimmers, the difference between winning and losing could be little more than a fraction of a second. Blink and you’ll miss it. So how do you coach an athlete who needs to improve by increments of time that are almost impossible to see? An avid swimmer and former triathlete himself, Ono began to think about how he might use math to make swimmers better as a professor at Emory University. 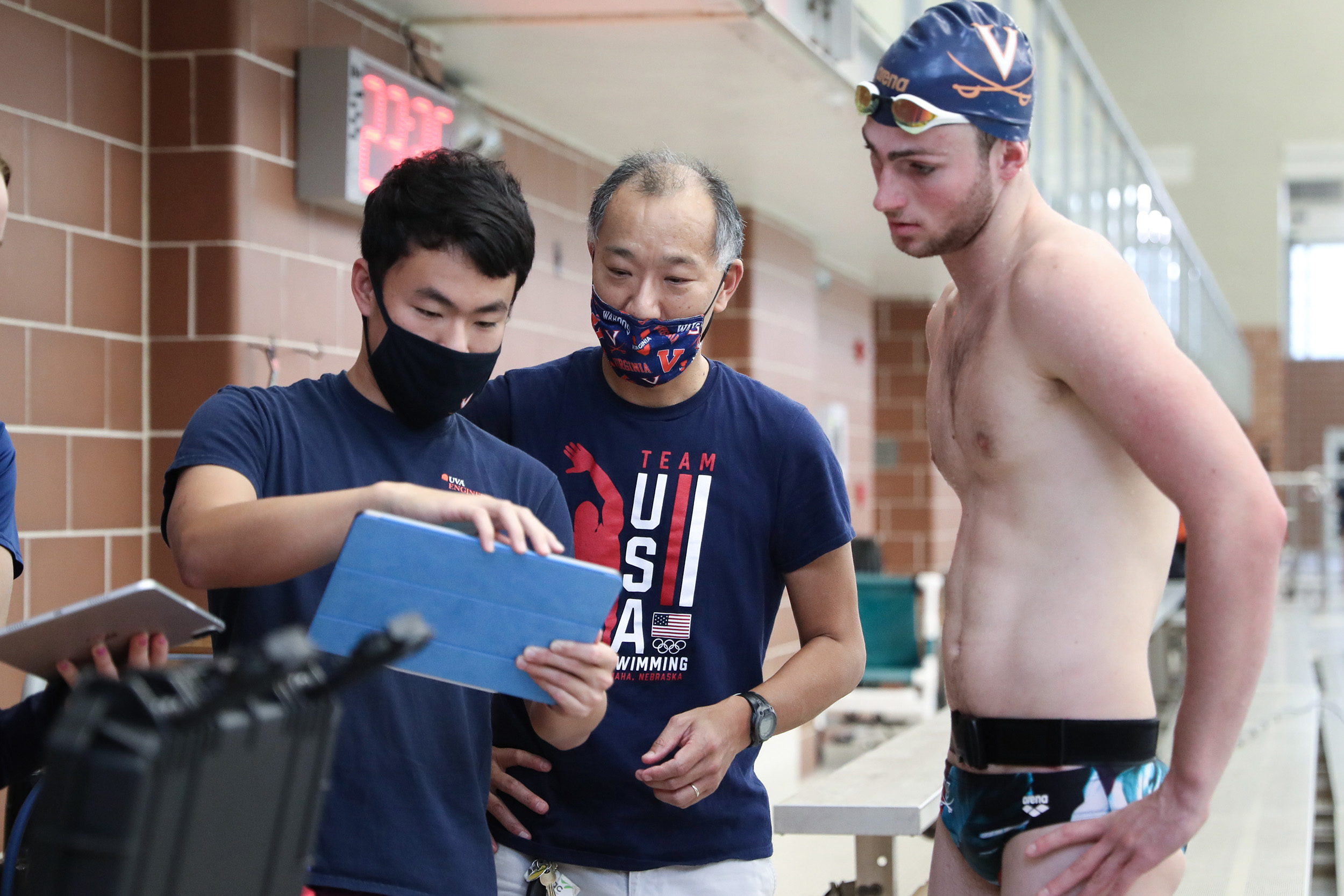 Two of his students there were swimmers: Andrew Wilson, a walk-on with Emory’s championship team who wanted to become a faster swimmer; and Maddie Locus, a Ph.D. student who had already won a gold medal at the World University Games.

“What are the odds that two future U.S. National Team members would end up in my classes at Emory? But that’s what happened,” Ono said.

At the time, Ono’s son was also swimming in high school and hoped to become a collegiate swimmer. It was that series of connections that led Ono to begin applying the scientific method to the challenge of making swimmers faster.

When Wilson won a gold medal in the Tokyo Olympics in the men’s 4x100-meter medley relay, “people began to hear about what we were doing,” Ono said. “The success began to speak for itself, and we were invited by elite-level coaches around the country to reproduce what we had done with Andrew.”

Ono joined the faculty at UVA in 2019, and by then, he had already developed several of the tests he needed to understand how to help swimmers gain valuable time in the water. Using a variety of sensors and a series of underwater cameras, Ono captures information about how swimmers move in the water and how they execute turns at the wall and about factors that are much more difficult to see, like how their bodies create unwanted drag and resistance and how they’re expending energy unnecessarily.

After a session with an athlete, Ono graphs the swimmer’s acceleration and the g-forces acting against them and compares it to the efforts of some of the many world-class and Olympic athletes he’s worked with to identify opportunities for improvement and optimization. The tweaks could be as simple as changing how deeply a swimmer dives into the pool, the way they anticipate a turn or just the way they hold their head in the water – adjustments that seem inconsequential, but could mean the difference between winning an Olympic medal and finishing off the medal stand.

“The secret weapon,” Ono says, “is that I’m studying these streams of acceleration data to identify which of the things that you can spot are the important ones.”

UVA coach Todd DeSorbo was still new to the UVA swim team when Russell Mark, a UVA alumnus and a high-performance manager with USA Swimming, the governing body that selects and trains U.S. teams for the Olympics and other national competitions, told him that Ono and his secret weapon were on Grounds, right under his nose.

“I don’t know any people in the world, let alone the United States, who are doing the types of things that [Ono’s] doing. I’d never seen it before,” said DeSorbo, who led the UVA women’s swimmers to their first ever NCAA championship in 2020 and was named an assistant coach to the 2021 U.S. Olympic swim team. “USA Swimming does it, but they bring him in to do it.”

With an advanced degree in accounting, DeSorbo is no stranger to numbers. But in a sport like swimming, it can be difficult to know how to make use of the data.

“A lot of coaches are overwhelmed with the amount of data that we get,” DeSorbo said. “You get it, but you don’t always know how to translate it into what we’re doing in the water. The best thing about Dr. Ono is that he has enough awareness of the sport to be able to explain the data in a way that we can apply it.”

UVA graduate and Olympic silver medalist Paige Madden was intent on swimming the 200-meter freestyle to qualify for the Olympic team, but based on Ono’s predictions and recommendations for improving her time, she swam the 400-meter freestyle, a move that clinched her spot on the 2021 team. 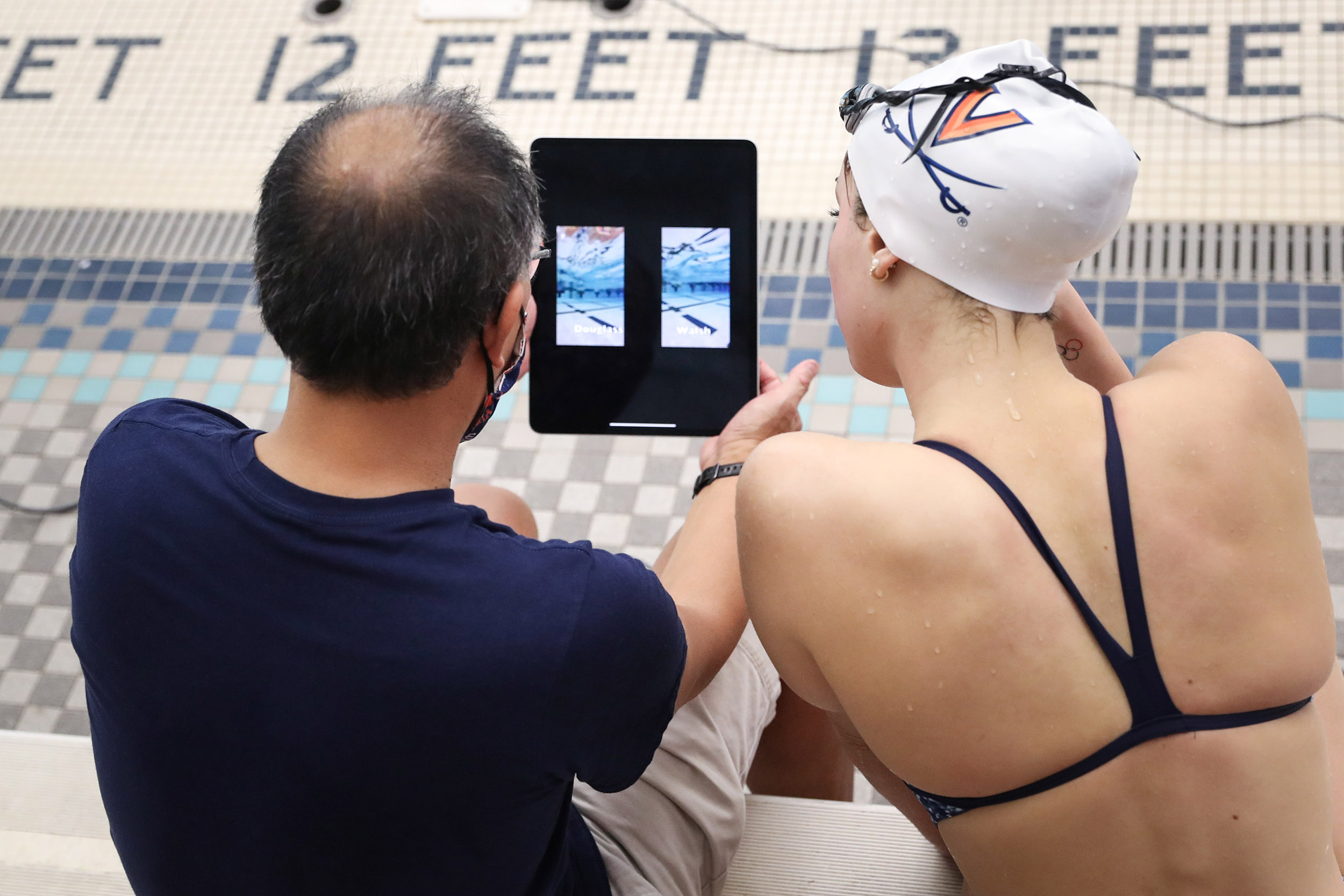 After graduating from UVA, she jumped at the offer to work with Ono as a consultant on his research team. She’s convinced that Ono’s approach works.

“It’s having a huge impact on UVA swimming,” Madden said – not just because he’s helping make sense of the data, but because of his enthusiasm.

“It’s inspiring,” Madden said. “It’s really cool for someone like me who swam their whole life. I’ve lived and breathed swimming since I was 5 years old, but he’s even more passionate about it than I am.”

According to Russell Mark, the combination of Ono’s expertise in mathematics and his enthusiasm for the sport are the key to his success.

“His passion and his energy are infectious,” Mark said. “And it’s not just the knowledge, it’s his enthusiasm, too. When you deal with people, you need to be able to make the numbers relatable, and he does that.”

And the results have been meaningful, DeSorbo explained. “In some cases, we see some significant improvements, and in other cases, any improvement is significant. Some of these athletes are so good that a half-second or a 10th-of-a-second drop is very significant.”

Of the 50 or so swimmers with whom Ono has worked, 15 have gone on to make the Olympic team – four of them in his first year working with the UVA team.

“Is it a path to something bigger?” Mark mused. “It could be.”

Taking Side Gigs to Another Level

At poolside, Jerry Lu briefs a swimmer on the tests Ono will be running. Lu is a fourth-year student double-majoring in economics within the College of Arts & Sciences and systems engineering and data analytics at the School of Engineering and Applied Science. To call him a research assistant is an understatement; he helped write the computer code that Ono’s system uses, assists Ono with analyzing the data they collect and monitors the progress of all the athletes they test throughout the season. Like Ono, he loves the sport of swimming, and even though he only spends about 15 hours a week assisting Ono, he considers it the most important aspect of his life as a student at UVA.

His work with Ono has given him a chance to work with some of the top swimmers in the world and to apply what he’s learning in the classroom to a real-world challenge. After graduating this spring, he plans to go on to graduate school, where he’ll study competitive strategy and continue to work with athletes making a name for themselves on the world stage – an ambition that might not have been possible without the experience and the connections he’s made as a part of Ono’s team. 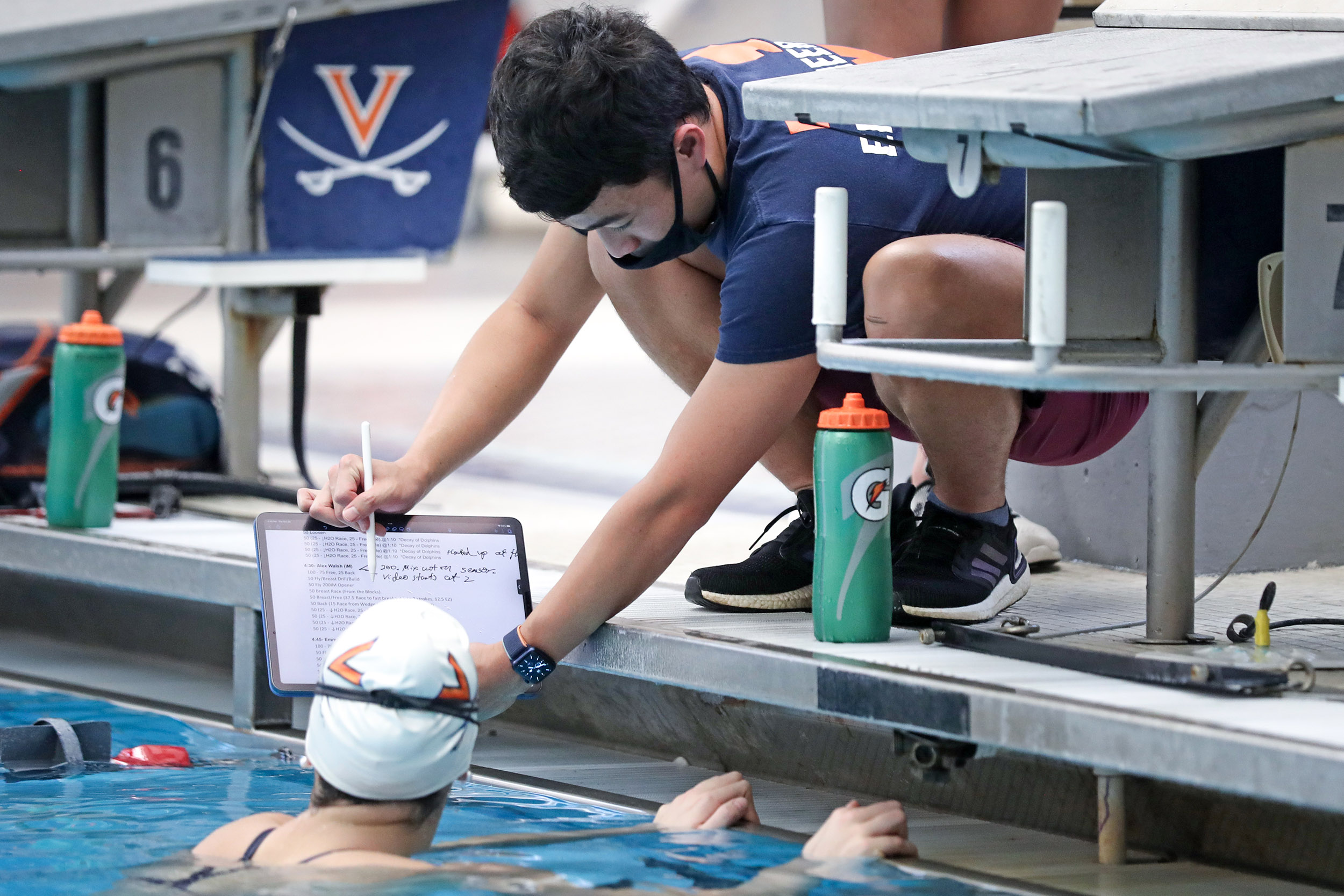 Ono uses the term “side gig” to refer to the work he and his team are doing with UVA swimming, but to Ian Baucom, Buckner W. Clay Dean of the College and Graduate School of Arts & Sciences, it represents the fundamental importance of the College’s endowed professors.

“It goes without saying that Ken is a leader in his field,” Baucom said, “but a vital aspect of his position as an endowed chair is that it gives him the flexibility to explore new paths to unexpected innovation, which propels the University and its students forward in ways that we couldn’t have possibly imagined.”

And although he’s modest about the work he’s doing outside of the classroom, working with swimmers is no less important to him than his day job.

“UVA is very well known for training people who go on to medical school and law school and commerce,” Ono said. “We’re known for that, but I would like us also to be known for some of the more fringe-but-passion projects that have their own rewards.”

“Here at UVA, we’re very lucky. We get smart kids, and smart kids have passions outside of class,” he added. “We look for those kinds of students. People who ultimately end up making a difference are those who execute and follow up on their passions and don’t just do things because that’s what they’re expected to do. I just want to make each athlete the best they can be, and that’s exactly what we want to do for students in the classroom,” Ono said. “That’s what the College of Arts & Sciences is all about.” 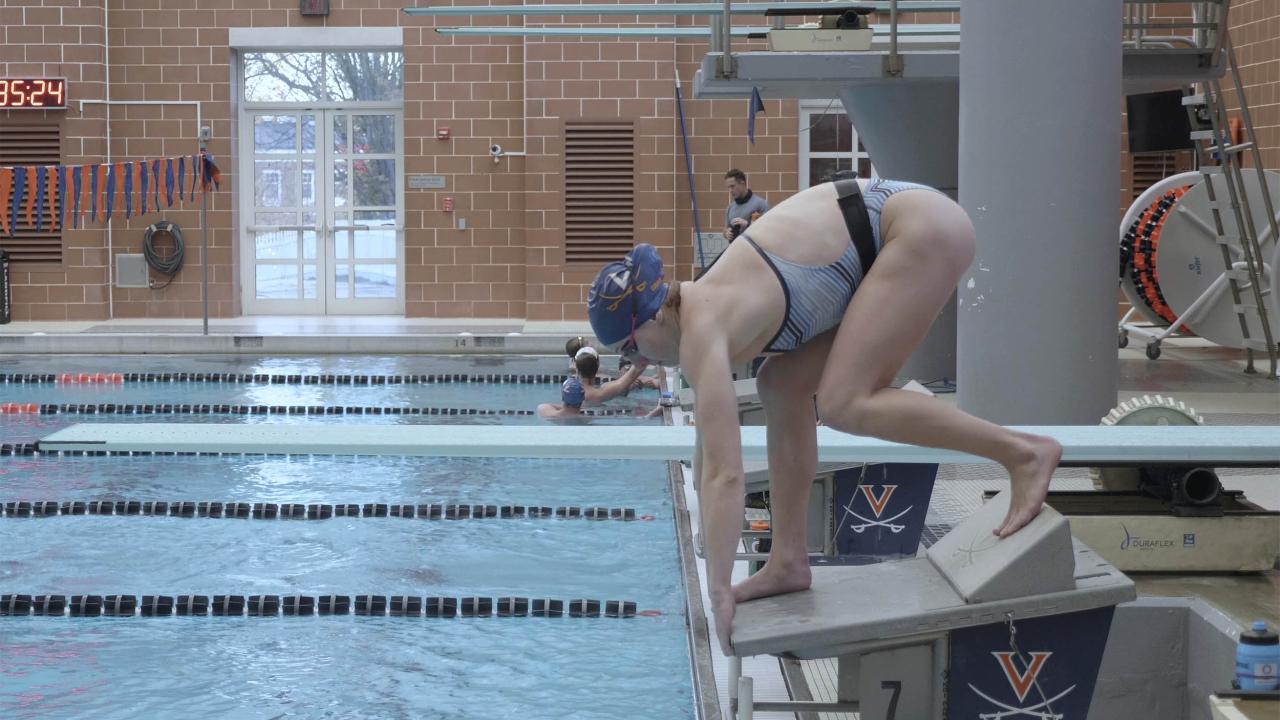 A Stroke of Genius

Video: A Stroke of Genius

A Stroke of Genius 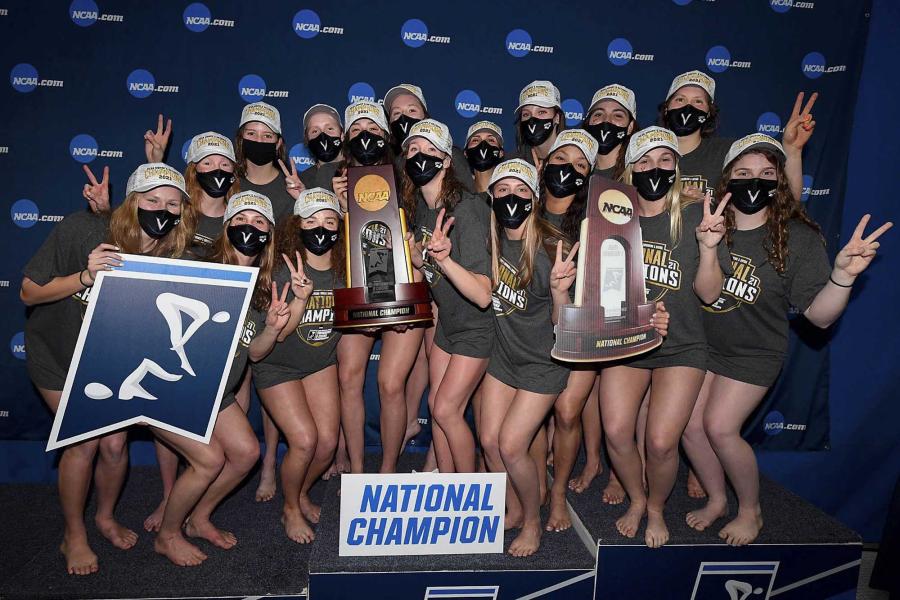 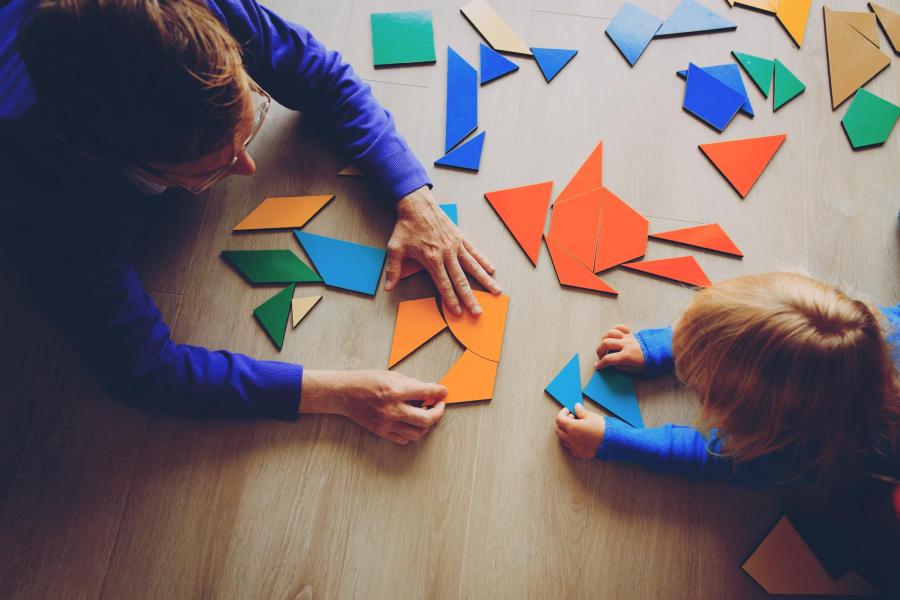 5 Tips to Get Your Children Excited About Math 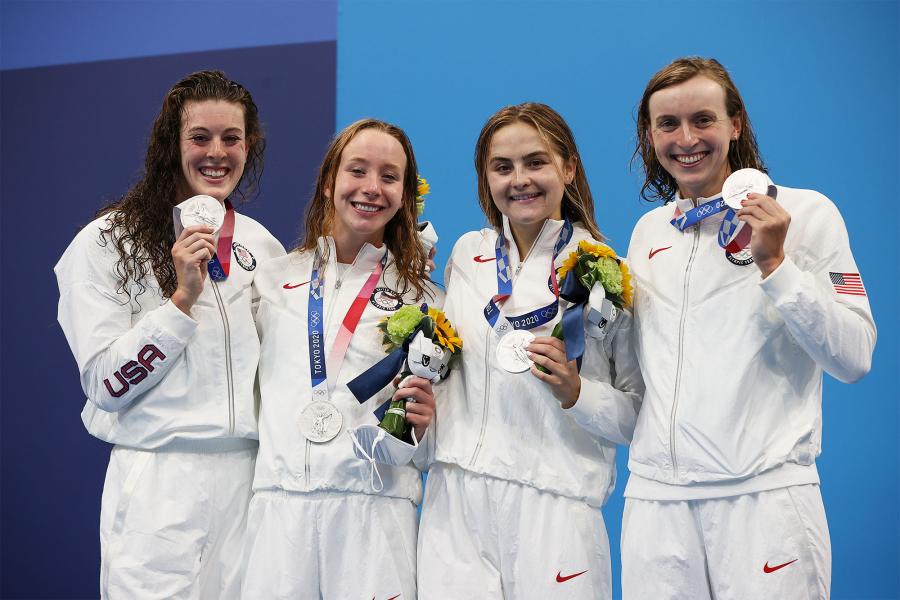