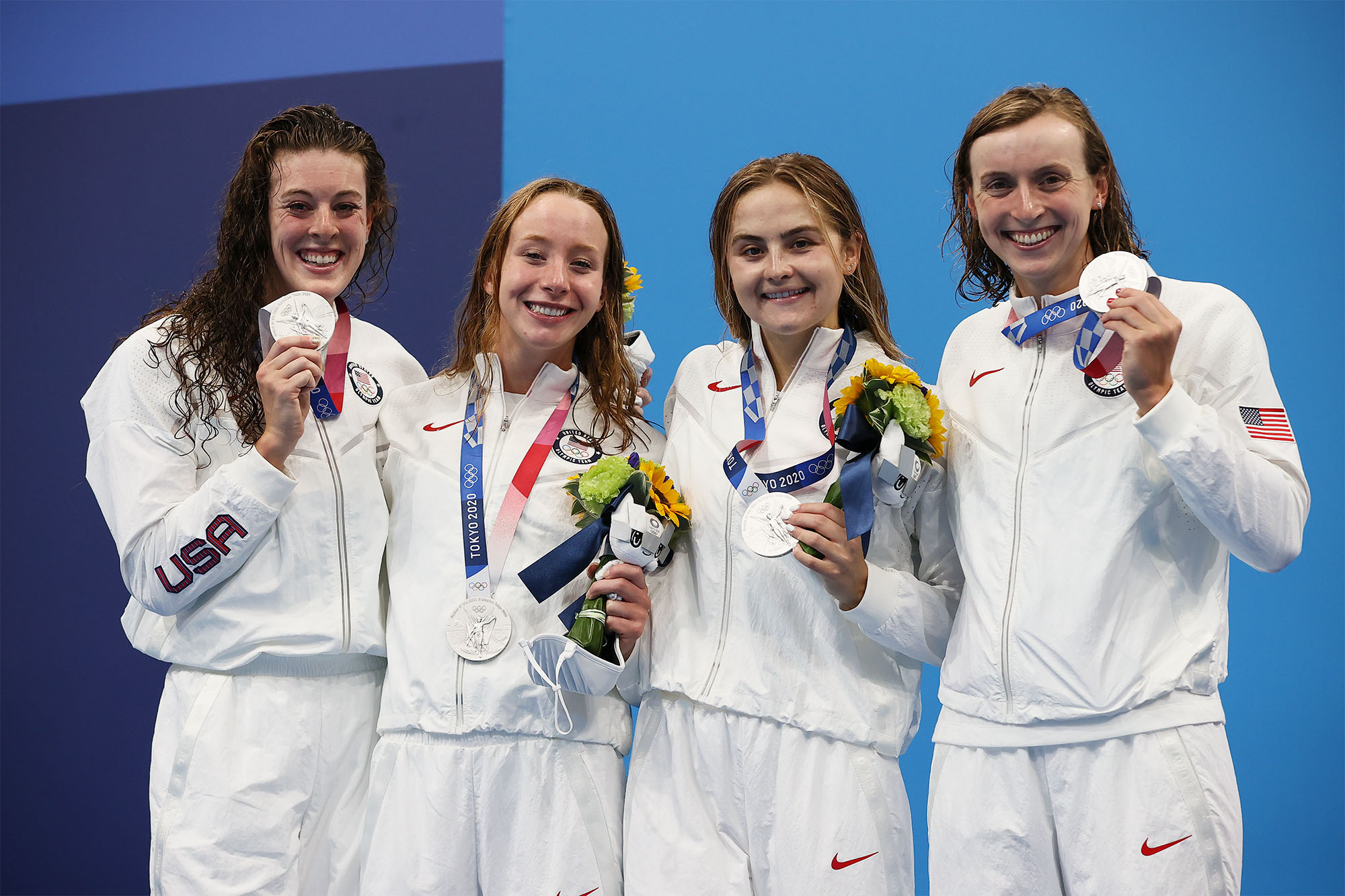 Madden, second from left, who swam the second leg of the relay in the final, is the fourth UVA swimmer to earn a medal this Olympics. (Photo by Getty Images)

In April, shortly after Paige Madden had helped lead the University of Virginia women’s swimming team to its first NCAA championship, Cavalier head coach Todd DeSorbo was asked about his star’s chances at making the Olympics.

“Anything can happen, but I think she has as good a shot as anybody else,” DeSorbo said. “I can tell you this – she won’t have any regrets. She won’t be able to look back and say she could have worked any harder.”

On Wednesday night, all the labor paid off in a big way for the two-time Atlantic Coast Conference Scholar Athlete of the Year.

Madden, who DeSorbo had to trick into resting during her time on the team because she was so relentless, on Thursday helped the United States’ 4x200-meter freestyle relay team win the silver medal at the Tokyo Olympic Games.

“It was awesome,” Madden said after the race. “This is like a dream.”

The May alumna from Alabama, who swam the second leg of the relay, became the fourth UVA swimmer to earn a medal this Olympics, joining incoming first-year Emma Weyant and current team members Alex Walsh and Kate Douglass.

DeSorbo, serving as an assistant coach for USA Swimming at the Games, and UVA associate head coach Tyler Fenwick were, as you can imagine, thrilled.

When Madden dove into the pool after teammate Allison Schmitt’s opening leg, the U.S. was in fourth place behind Canada. During her final 100 meters, Madden moved the American squad into third place, swimming her leg in 1 minute, 55.2 seconds.

During the third leg, Katie McLaughlin maintained the U.S. team’s position, and then Katie Ledecky overtook the Australian team during her swim and finished just 0.4 seconds behind the winning team from China.

That race has us on our feet from start to finish!!

Hear from @TeamUSA on what it took to win silver and beat the heavily favored Australian team, and celebrate as they hear their splits. #TokyoOlympics

With more medal rounds in a number of sports on the horizon, UVA has the chance to add to its already impressive collection of hardware.

Click here to learn which current and former Hoos are in Tokyo, and for all the latest results and schedules.

Message from President Ryan Regarding Fatal Shooting on Grounds END_OF_DOCUMENT_TOKEN_TO_BE_REPLACED