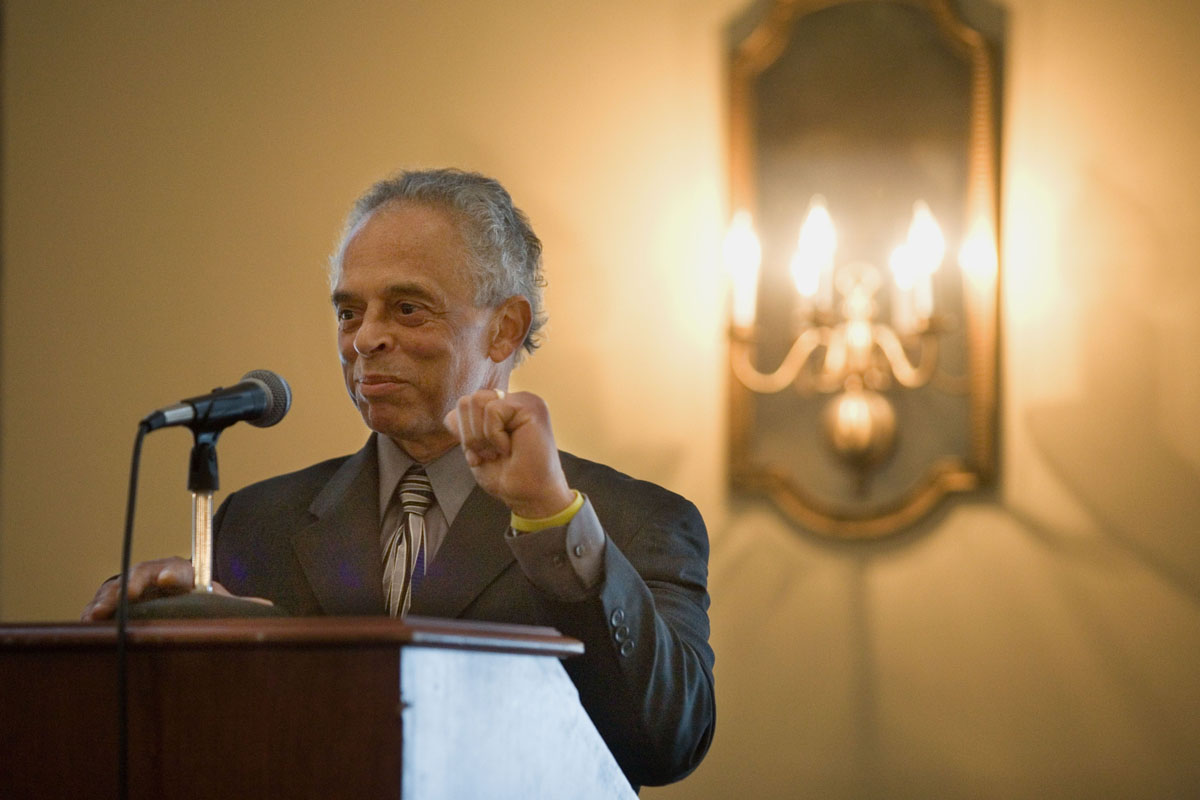 Bland addressed the annual Harambee II event at Newcomb Hall, where members of the first-year class and transfer students were recognized for their achievements during their first semester at the University.

Organized by the Peer Advisor Program of the Office of African-American Affairs, the ceremony featured recognition of 33 students who were presented with “high honors” and another 49 who were given “honors.”

Bland attended U.Va. from 1955 to 1959, receiving a bachelor’s degree in electrical engineering. He was one of three African-American students who entered in the fall of 1955, but the other two left before graduating.

In his remarks, Bland said that he feels a connection with students every time he returns to the University.

“I think we're connected in a very special way. You are connected to me because I am your past. I am connected to you because you are my future,” he said. “Today, in this moment and time, past and future come together.”

During his first two years at U.Va., Bland said that he devoted too much time and attention to integrating the University and not enough to his academic work.

“The hostility that we were expecting did not, in fact, materialize. We immediately set ourselves to testing the limits of our freedom here at the University. Anything and everything there was to participate in here at the University, we made a point to try and participate in it — not because we were interested in it, necessarily, but because we wanted to establish that we had the right to do that.

“Frankly, I struggled academically during my first two years. I was on academic probation and very close to flunking out,” Bland said. "That is when I made the decision that failure would not be an option.”

Bland, who went on to receive both a master's and a Ph.D. after leaving U.Va., said that he felt an obligation to himself, to his family, and to his people that he would do whatever it took to succeed.

He told the students that the experience taught him that he was in control of his own destiny and that hard work overcomes a lot of shortcomings, especially when the hard work also means working smart.

Referring to U.Va.’s Peer Advising Program and to the Office of African-American Affairs, which is celebrating its 30th anniversary this year, Bland said that he could only begin to imagine the impact such programs might have had on him and his contemporaries had they been available.

“I can only wonder how many of those students who left without graduating would have stayed and succeeded had their been an Office of African-American Affairs and a Peer Advising Program when I was a student,” said Bland.

The nationally regarded Peer Advising Program is cited as one of the factors leading to U.Va.’s success in the retention and graduation of African-American students. Earlier this month, the Journal of Blacks in Higher Education released its annual study showing that U.Va. has had the highest six-year graduation rate for African-American students of any public university in the country for 13 years in a row.

Netflix to Add Ads. Why This Could Be a ‘Game-Changer’ for Your Viewing Experience END_OF_DOCUMENT_TOKEN_TO_BE_REPLACED

What’s Next for UVA’s Class of 2022? END_OF_DOCUMENT_TOKEN_TO_BE_REPLACED