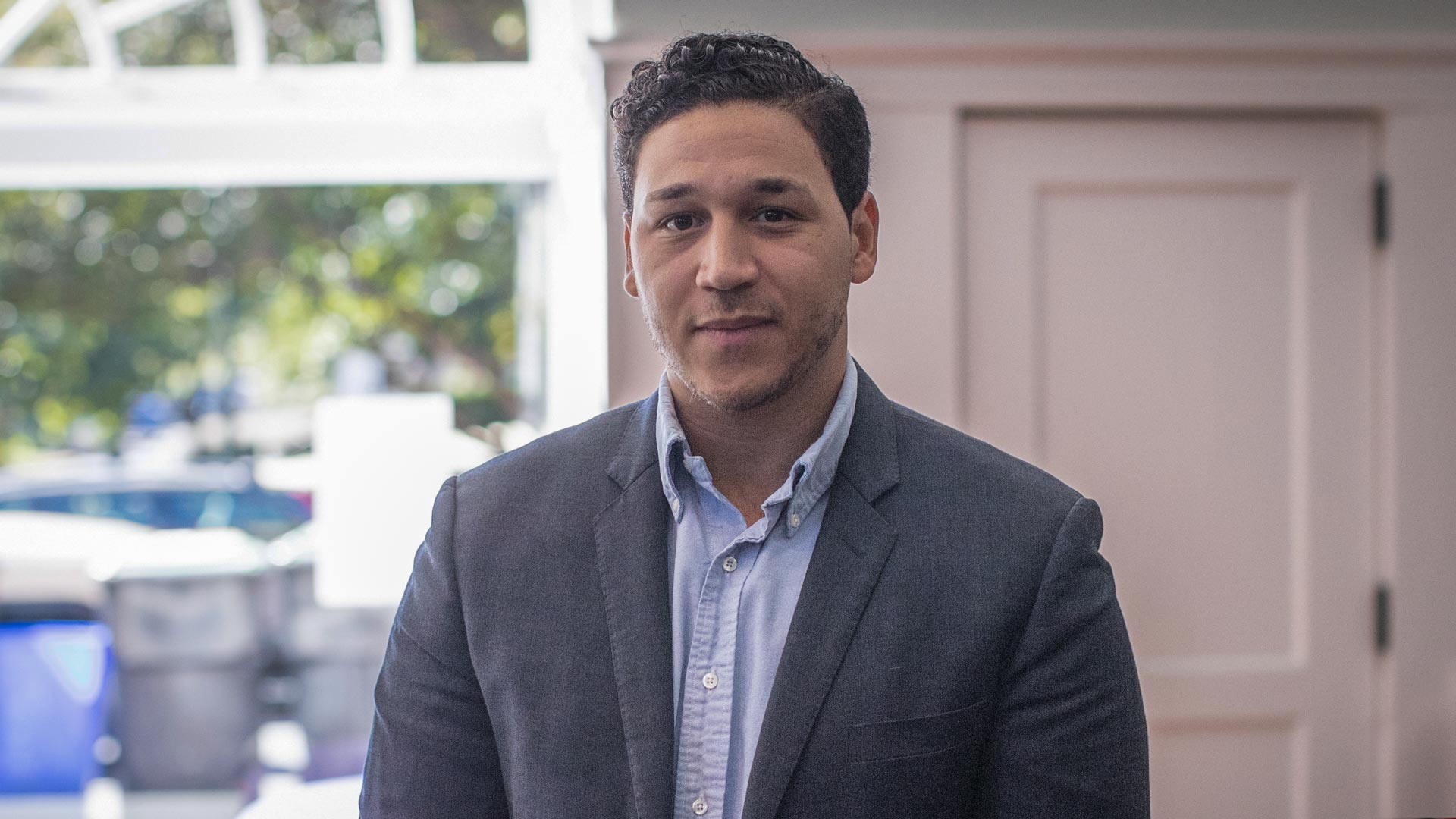 Christian West was a 10th-grader at a Washington, D.C. high school back in 2002 when the unexpected happened.

West’s grandmother had fallen ill; the next thing West knew, his mother had moved the family to a rural Virginia town so that they could tend to her.

For West, Louisa – located about 35 miles outside of Charlottesville – may as well have been Pluto.

“I went from catching the subway to school every day to living on a 100-acre farm in the middle of Virginia,” West said. “That was quite the change.”

What West didn’t know at the time was that the change would lead him to the University of Virginia, initially as a first-generation college student and, later, to a fulfilling professional career in admissions at UVA.

Not that it happened overnight.

In fact, when West was a student at Louisa County High School, he initially had no thought of attending UVA, despite its close proximity. That changed after former UVA Dean of Admission John Blackburn came to give a talk at his school.

As he listened to Blackburn, West became “enthralled” by all the different things he could become involved in at UVA.

“High-performing, first-generation or low-income students often underestimate the reach of their college options – and I can say I was one of those students,” West said. “It wasn’t very clear to me that because of my academic standing that I could reach a certain level of institutions. I was really basing my decisions off of where friends had attended previously. That was where my knowledge basis was, and it took almost like an intervention to kind of increase my understanding of what I could achieve.”

When West visited Grounds with a friend who was involved in the Upward Bound program, he knew immediately that UVA was the only place for him. “There was a lot of energy and excitement,” he recalled. “I really vibed with the student life.”

Still, West – whose mother, Deidre, had always dreamed of him being the first in the family to go to college – didn’t know if he would be able to make UVA work financially.

Fortunately for West, AccessUVA – the University’s financial aid program, which meets 100 percent of students’ demonstrated financial need and limits or eliminates post-graduation indebtedness – made it possible.

Today, the 2009 alumnus – who went on to earn a master’s degree at UVA and is currently pursuing his doctorate – works as the assistant director of undergraduate admission in UVA’s McIntire School of Commerce. Prior to that, he worked for three years in the Office of Undergraduate Admission.

“He’s really committed to making sure that kids have the same kinds of opportunities that he was afforded,” Associate Dean of Admission Valerie Gregory said. “He adds his own personal touch. He just has a way of saying, ‘Let me tell you about my story. I felt that way too.’”

West said he has found his passion in admissions.

“I think it’s really connected back to my own experience of being a first-gen student and not knowing a whole lot of things,” West said. “I want to make sure that the students we connect with are able to see themselves here and that they’ll be successful and give them as much information as possible to make a decision – whether it’s coming to UVA in general, or choosing an academic program that’s the best fit for them here at the Commerce School.”

West’s own assimilation to UVA took some time.

All the while, West said fellow students and administrators were vital in helping him find his way.

During his first few years, West served as a resident adviser, orientation leader and a peer adviser in the Office of African-American Affairs.

Then, as a fourth-year student, West was selected as the head resident of the Lawn.

“That was the year that I really came to understand the power of this place and how we intentionally put together students from various backgrounds and experiences and challenge them to learn from each other,” West said. “When we graduated, I was sad to leave because I had just developed these amazing connections with people who I probably never would have been friends with outside of that opportunity.”

As a young professional on the job market, West found himself relying on his leadership experiences from UVA.

“Nobody ever asked me what my major was,” West said, “but they did ask me about certain experiences and challenges that I faced. There were things that I was able to do as an undergraduate that gave me skills and experiences that I think put me ahead of the pack.”

West thrives on helping today’s students recognize their capabilities. “This is a very competitive environment at UVA, and sometimes I think students get really intimidated and just need a little bit of encouragement and support,” he said.

Often, West’s advice for students is to just go for it – a mindset he picked up from his mother. “She would always tell me, ‘What’s the worst that can happen? They’ll say no and then you’ll have other opportunities,’” West said.

When recalling his own first year at UVA, West – whose family still lives in Louisa – broke into a wide smile.

“UVA has challenged me to be confident in my skills and abilities,” he said, “and making me reflect on what I’m passionate about.”

Hear more from West and meet other members of the UVA community at this admission site.

Meet the New Cavalier on Horseback: She’s Eager To ‘Carry On a Legacy’ END_OF_DOCUMENT_TOKEN_TO_BE_REPLACED

Virginia Football – For All Virginia END_OF_DOCUMENT_TOKEN_TO_BE_REPLACED