For the First Time in 20 Years, UVA Appoints a New Faculty Athletics Rep 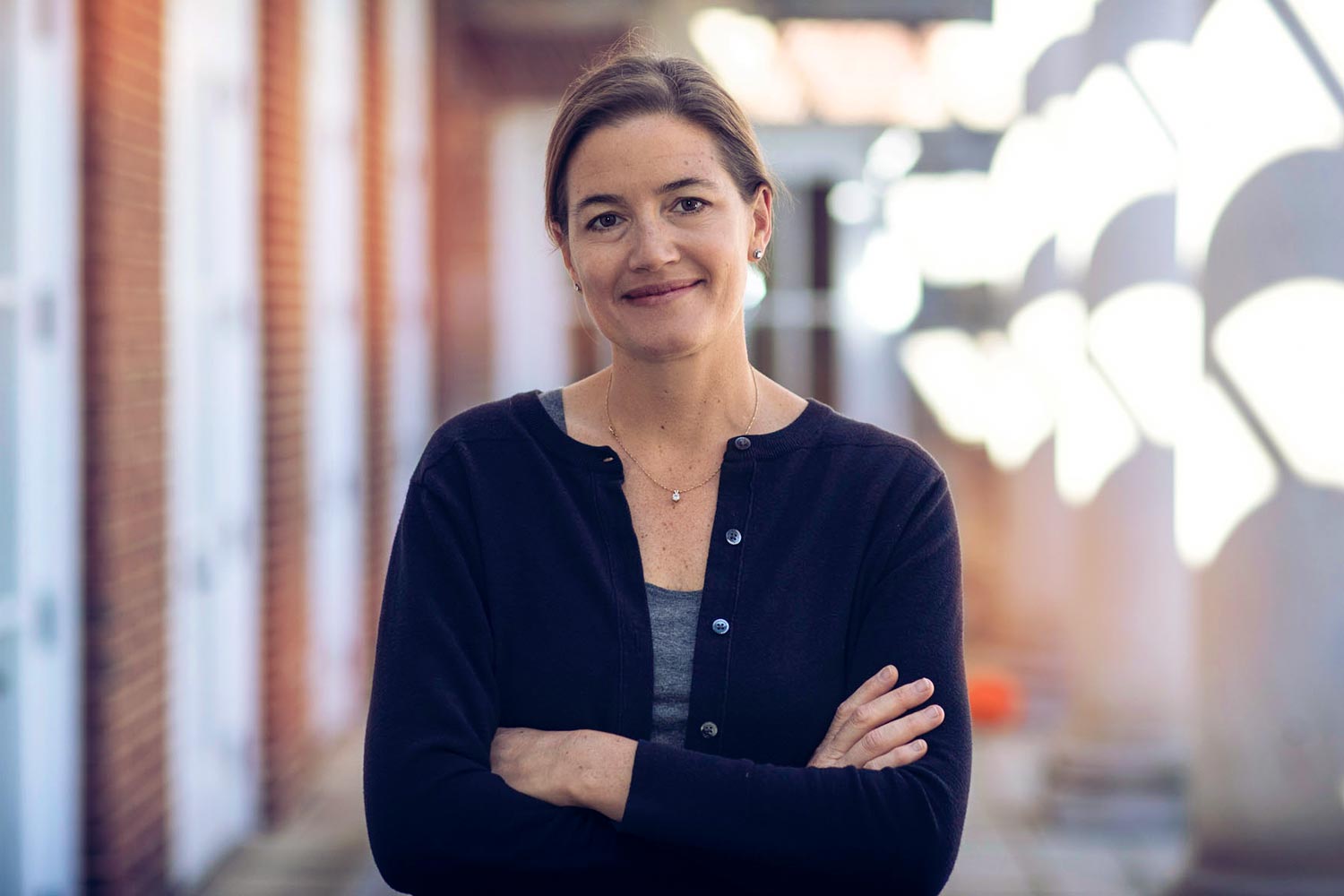 Growing up outside Chicago, Carrie Ramenofsky loved sports. She played softball and basketball in high school, and was good enough in the latter to win an athletic scholarship to the College of the Holy Cross in Worcester, Massachusetts. There, she won All-Patriot League honors as a senior.

When her playing days ended, she pursued a career in academia, married and had four children. Some two decades later, Carrie M. Heilman is an associate professor of marketing at the University of Virginia’s McIntire School of Commerce. Her athletic involvement is mostly limited to coaching her children’s basketball teams.

“Growing up, sports were such a big part of my life – it was kind of my identity, being an athlete,” she said recently in her sunny Rouss Hall office. “I just loved sports.”

When Heilman saw that the University was looking for a new faculty athletics representative, she jumped at the chance.

“I’ve really enjoyed the handful of opportunities I’ve had over the years to be involved with the athletic department here,” she said. “So when this opportunity came up, I knew it would be a challenging role, but I thought, ‘What a great opportunity to get involved with athletics again.’”

This week, Heilman was named the University’s new faculty athletics representative, succeeding Carolyn M. Callahan, a professor in the Curry School of Education, who has served in that role since 1997.

The faculty athletics representative ensures that the University “establishes and maintains the appropriate balance between academics and intercollegiate athletics,” according to the job description, and represents the University at meetings of the Atlantic Coast Conference and the National Collegiate Athletic Association. The representative serves as the faculty liaison between the academic enterprise and the athletics department.

Heilman will shadow Callahan at upcoming ACC meetings before formally taking over the role on Jan. 1. Callahan – who is shifting to a part-time faculty schedule on Jan. 1 – will accompany Heilman to her first NCAA meeting in late January.

Heilman is not unfamiliar with the institutional side of collegiate athletics. She previously served as the faculty athletics representative at Washington University in St. Louis, an NCAA Division III school. After joining the UVA faculty, she served on the Athletics Advisory Council Committee, chairing it from 2008 to 2011, and the Athletics Transfer Appeals Committee.

“Carrie’s unique background and experience make her the ideal person to carry out the important duties of the faculty athletics representative,” UVA President Teresa A. Sullivan said. “I am grateful to [McIntire] Dean Carl Zeithaml for his endorsement of Carrie’s commitment to this new role. I also want to recognize the search committee members for their dedication over the summer and fall to help us sustain the University’s commitment to student-athletes.”

“She has a particularly interesting background as an academic, as a member and former chair of our Athletics Advisory Council, and as a former student-athlete,” he said. “She will bring a great perspective to the role; her father Sam was a faculty representative at Loyola University (Chicago) during his teaching career. Carrie Heilman will represent UVA, our faculty and our intercollegiate athletics program in an exemplary fashion.”

Heilman will soon be working with a new athletic director and a new president. In September, Littlepage announced his retirement as UVA’s director of athletics, just days before the UVA Board of Visitors selected James E. Ryan to succeed Sullivan next year.

Heilman said she takes the office with no preconceived agenda. “I simply want to do my best to represent the University, and also to keep the student-athlete in mind, always, first and foremost,” she said.

She’s looking forward to working with the athletics staff and coaches, and especially to spending time with the University’s student-athletes. As a former athlete and now the parent of budding athletes, she understands the pressures of balancing a full-time academic load and pursuing athletic excellence.

“You have to be so much more disciplined to manage your time when you’re playing a sport,” she said. “A lot of times, I find student-athletes will do better in the classroom when they’re playing a sport, ironically because they have less time.”

In 20 years as UVA’s faculty athletics representative, Carolyn Callahan has been a leader in intercollegiate athletics.

She served as president of the Atlantic Coast Conference from 2003 to 2004 and from 2010 to 2011, in addition to two terms as the conference’s treasurer. She has participated on dozens of ACC and NCAA committees, and chaired both the NCAA Academic Eligibility Compliance Cabinet and Academic Cabinet.

“Carolyn has served Virginia and the ACC for decades as the faculty athletics representative, and has done so with great professionalism and integrity, earning the respect of her peers both within the league and nationally,” John Swofford, commissioner of the ACC, said. “Her thoughtfulness and character will be greatly missed around our table, and we wish her nothing but the best.”

At the University level, Callahan most notably chaired a presidentially appointed Task Force on the Future of Athletics. The panel’s report, which recommended scaling back several programs in the face of anticipated fiscal shortfalls, spurred the Board of Visitors to commit to ramping up fundraising, fully funding athletic scholarships to the NCAA’s maximum allowable levels and improving facilities for all Cavalier athletic teams.

“It is difficult to remember back to a time when Carolyn Callahan was not our faculty athletics representative,” Littlepage said. “She has had a distinguished tenure in this position. In the past 20 years, Carolyn has dedicated much of her time to improving intercollegiate athletics at UVA, within the ACC and nationally. She has been a strong voice in helping to find a balance between academic achievement and the pursuit of excellence in athletics, while keeping the welfare of student-athletes as a top priority.”

At a personal level, she particularly enjoyed “the opportunity to meet and interact with first-class administrators within athletics and across the University, and the coaching staffs and terrific student-athletes at UVA, and the opportunity to interact on NCAA committees with colleagues from around the country in trying to ensure intercollegiate athletics provides the best opportunities for student-athletes.”

She said she will leave the post in good hands.

“I am confident that Carrie is a great choice to be the faculty athletics representative for the University of Virginia,” Callahan said. “Her commitment to excellence, fairness and integrity will serve us all well.”

It’s Copperhead Season in Virginia. Here Is What You Need to Know END_OF_DOCUMENT_TOKEN_TO_BE_REPLACED

What’s Next for UVA’s Class of 2022? END_OF_DOCUMENT_TOKEN_TO_BE_REPLACED