“Ecology boot camp.” That’s how University of Virginia biologist Doug Taylor describes the experience for people participating in a research project that he and his colleague Janis Antonovics have conducted for 28 years at the University’s Mountain Lake Biological Station in Southwestern Virginia. It’s a proven training ground for evolutionary biologists, and the ideas and people it has spawned have spread like pollen to other sites in the United States and Europe.

The researchers are studying the dynamics at play between a plant, white campion, and a fungus, anther smut, that transmits its spores from flower to flower via nocturnal moth pollinators. The fungus forces a sex change in the infected plant that allows the smut to proliferate. However, the plant also evolves smut resistance with each succeeding generation in an ongoing reproductive arms race.

Taylor and Antonovics’ research investigates how the genetics of interconnected populations – as opposed to single populations – changes over time through extinction events and re-colonization through seed and spore dispersal. The host-pathogen system also serves as a model that scientists can use to gain a better understanding of how diseases spread from one local population to another, similar to flu spreading from country to country. 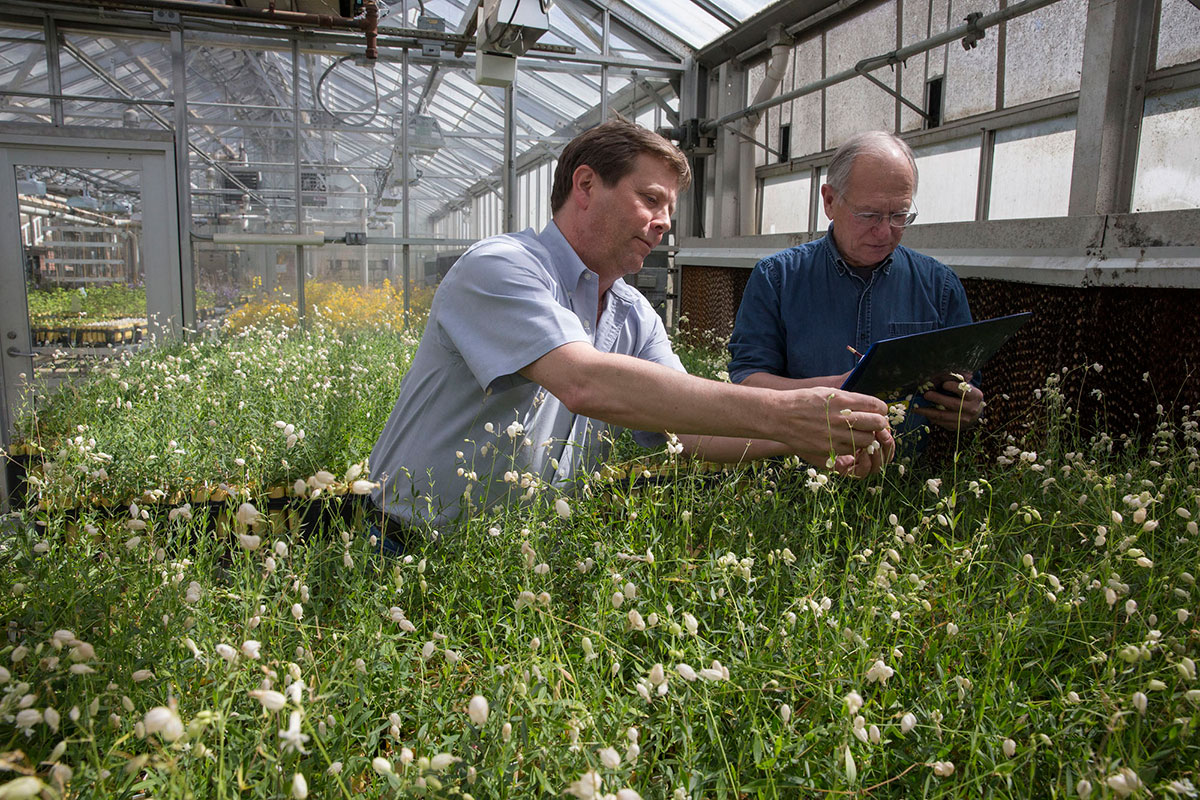 The ongoing study has kept scores of biologists busy, mostly on a voluntary basis. Each summer, Taylor and Antonovics converge with their students – graduate and undergraduate – and faculty and students from other universities, to conduct their annual census. This long-term research provides a reference point for gaining insights into how organisms and pathogens interact – strengthening and weakening each other, in a genetic battle to propagate, proliferate and avoid annihilation.

“We get up at 5 a.m. to count flowers,” Taylor said. “That’s the boot camp part of it. We do this because the blossoms open during the night and remain open only during the first couple of hours of daylight. That’s when we need to be there.”

The researchers also go out for a couple of hours near dusk when the flowers reopen, making for a long day. 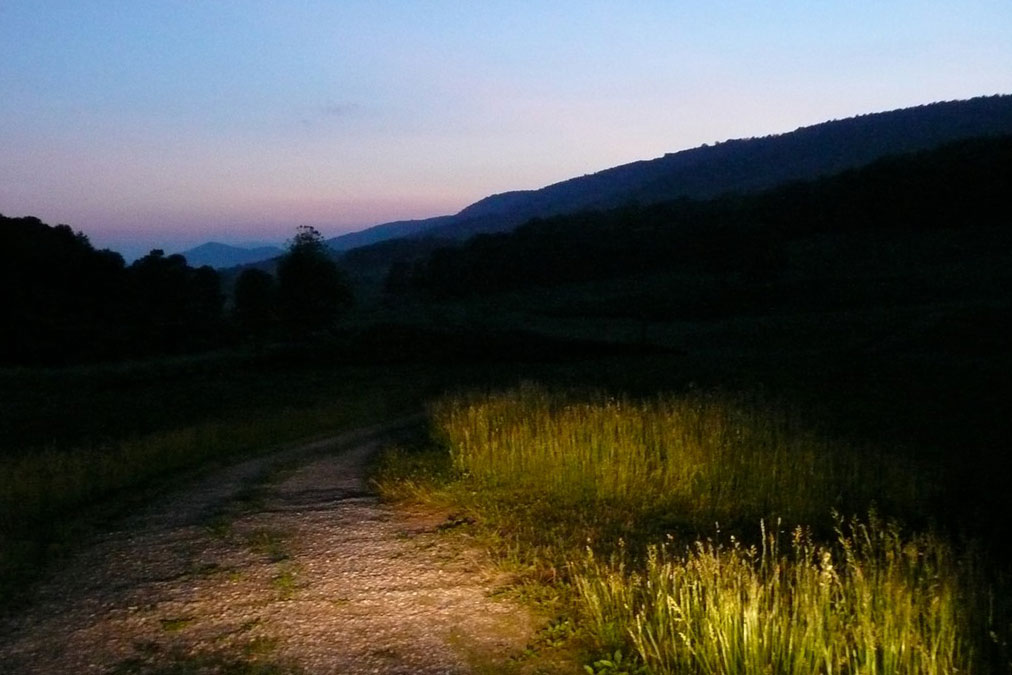 Researchers travel the back roads at dawn and dusk looking for flowers to sample.

Moths pollinate the flowers at night, carrying from flower to flower not only pollen, but also anther smut. The smut then colonizes on the sex organs of the flower and triggers a sex change in the plant, inducing the development of male anthers in female flowers, enabling further colonization and reproduction of the anther smut. The fungus is therefore a natural model of a sexually transmitted disease.

The biologists survey the flora lining 95 miles of backcountry roads around the research station, creeping along in vehicles at 5 m.p.h., scanning for flowers, mapping the positions of populations and counting numbers of diseased and healthy plants. It takes three days to a week for about 15 census-takers to complete the route each summer, depending on how successful the plants have been at proliferating in a given year, or how diminished they may be, perhaps due to high levels of smut infection. A second census later in the summer serves as confirmation, and checks for “late bloomers.”

“The census allows us to map both species as they decline and recover, and helps us predict circumstances where the disease may wane or come back again,” Taylor said.

After 28 years, there’s plenty of data to analyze. 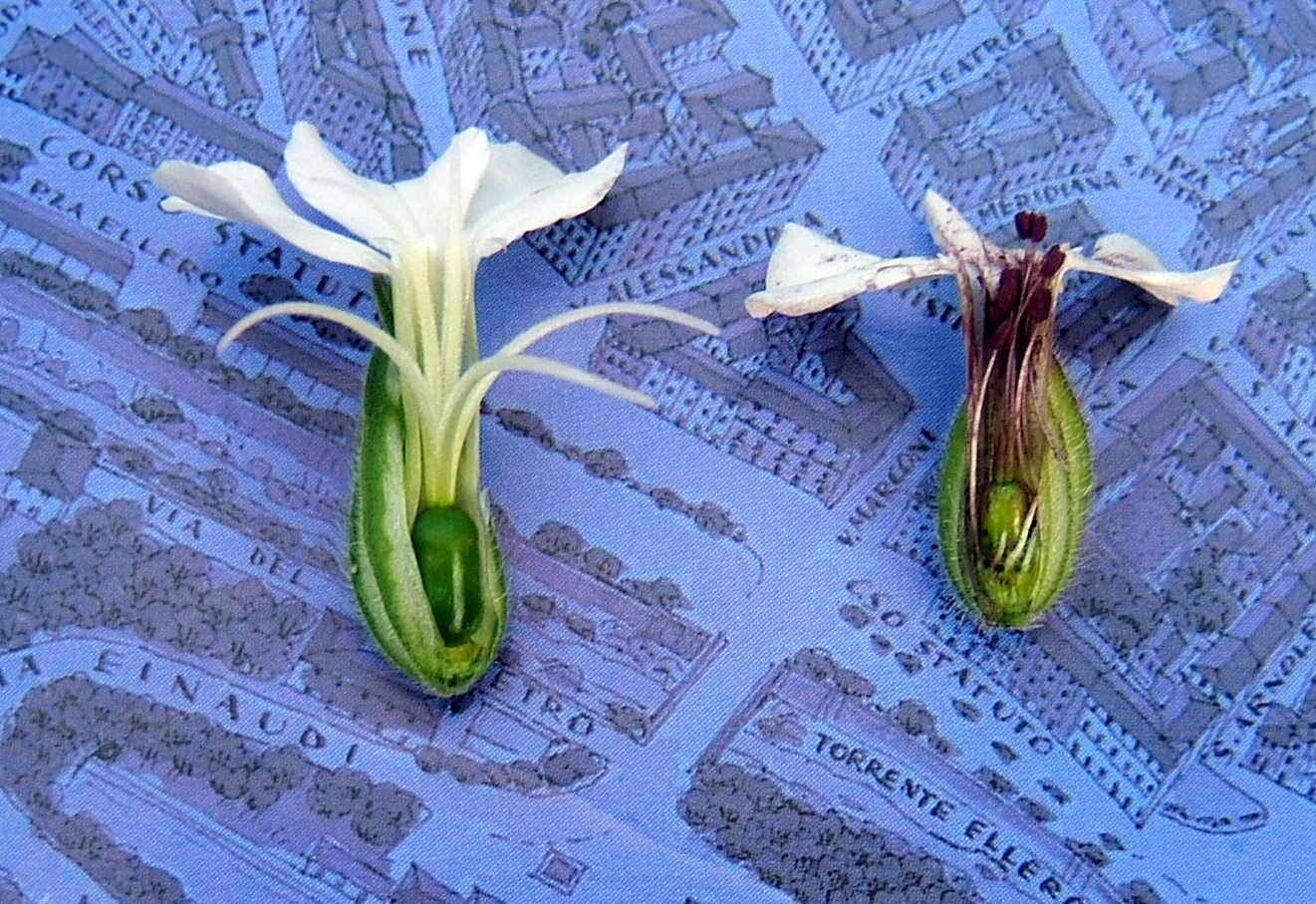 A healthy flower, left, and a smut-infected flower, right.

“We’re interested in how species interact, and how these interactions affect genetic diversity,” Taylor said. “This gets to the heart of the dynamics of evolution, how changes occur at the local level and then are exported. We’re working to understand how extinction and colonization in interconnected populations influences the evolutionary processes that create and destroy genetic diversity.”

For many years the biologists funded the project largely from their own pockets or on the coattails of other related projects. But the research took a major step forward when a former student of Taylor’s, Peter Fields, now a research scientist at the University of Basel in Switzerland, began to analyze the system using DNA-based genetic markers. 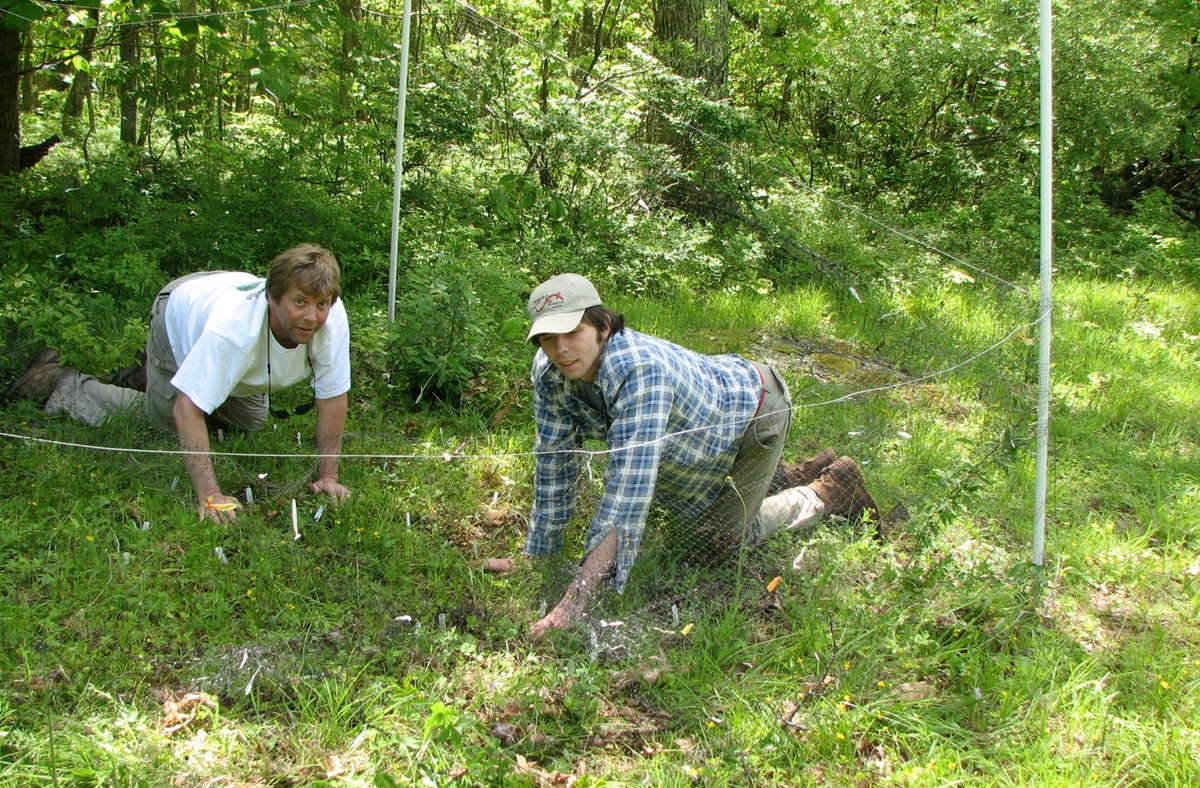 Taylor and former student Peter Fields on hands and knees in a study plot.

With this advance, Taylor and Antonovics won a five-year, $500,000 grant from the National Science Foundation to conduct a long-term genetic analysis of the host-pathogen relationship between the flower and smut. The grant is renewable for an additional five years, at which time the collaboration will have endured for nearly 40 years.

Taylor became interested in this research early in his career. As a graduate student he studied under Antonovics, his Ph.D. mentor, when they both were at Duke University. Beginning in 1988, they traveled each summer to UVA’s Mountain Lake Biological Station to conduct their studies, where white campion and its antagonistic smut are abundant. The UVA station hosts researchers from institutions around the country who work on ecological and evolutionary studies involving plants and animals. The protected station and its surrounding countryside are relatively undisturbed, providing a nearly perfect living laboratory. 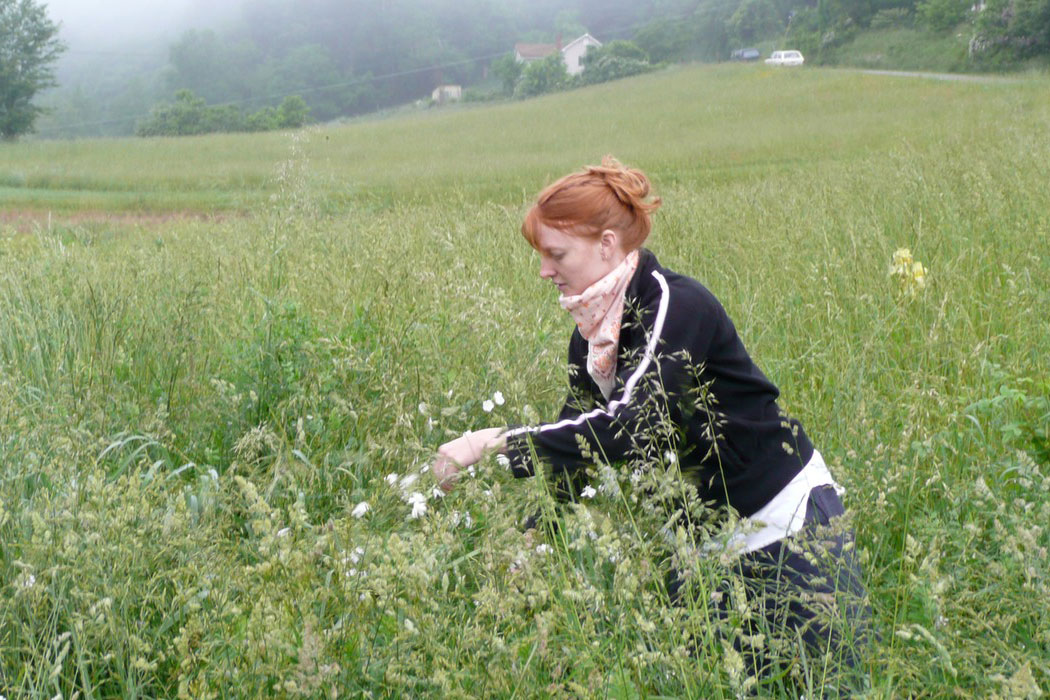 “Our collaboration typifies the way people connect at Mountain Lake and spread from there,” Taylor said. “Over the years, this project has been the catalyst for dozens of students, post-docs, faculty collaborators and extramural funding. Most of the grants during my career stem from this long-term project, which has a unique culture of its own.”

People who have participated in the project are now faculty members and science professionals all over the world, he said. Some return to Mountain Lake each summer to conduct other research projects, grown from the work they did as students and junior faculty members during their summers at the station. It’s an opportunity to discuss careers, research projects, where they’ve gone and where they’re going, and to participate in the white campion/anther smut survey.

“We get together with students and colleagues,” Taylor said, “cook some dinner and get the next generation involved in science. Mountain Lake is a treasure that has allowed UVA to be the center of this activity.” 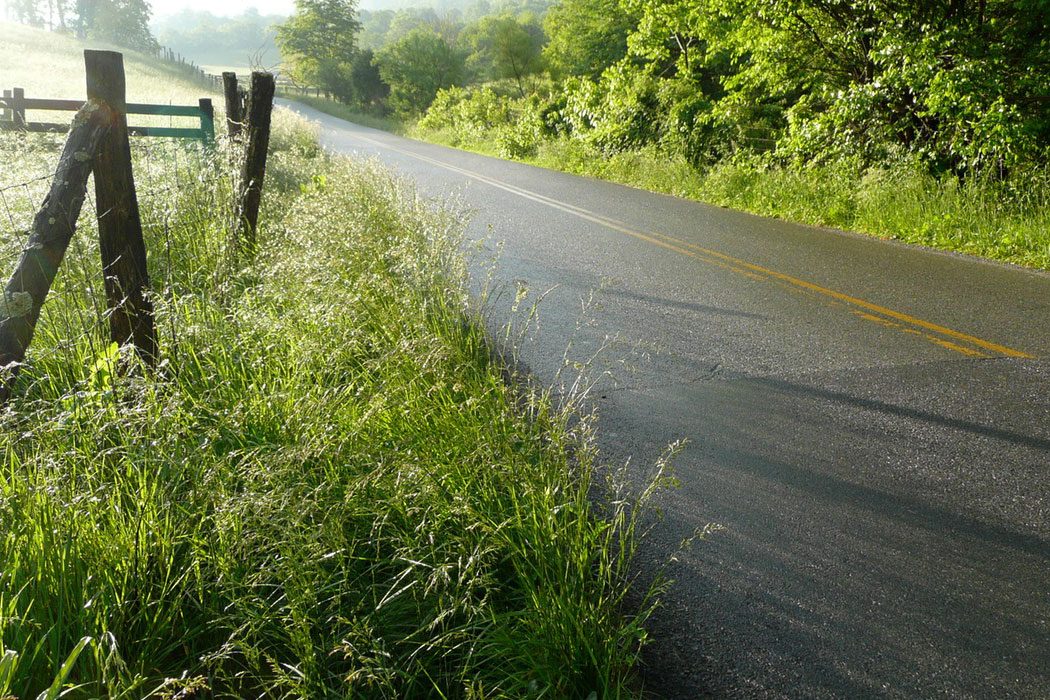