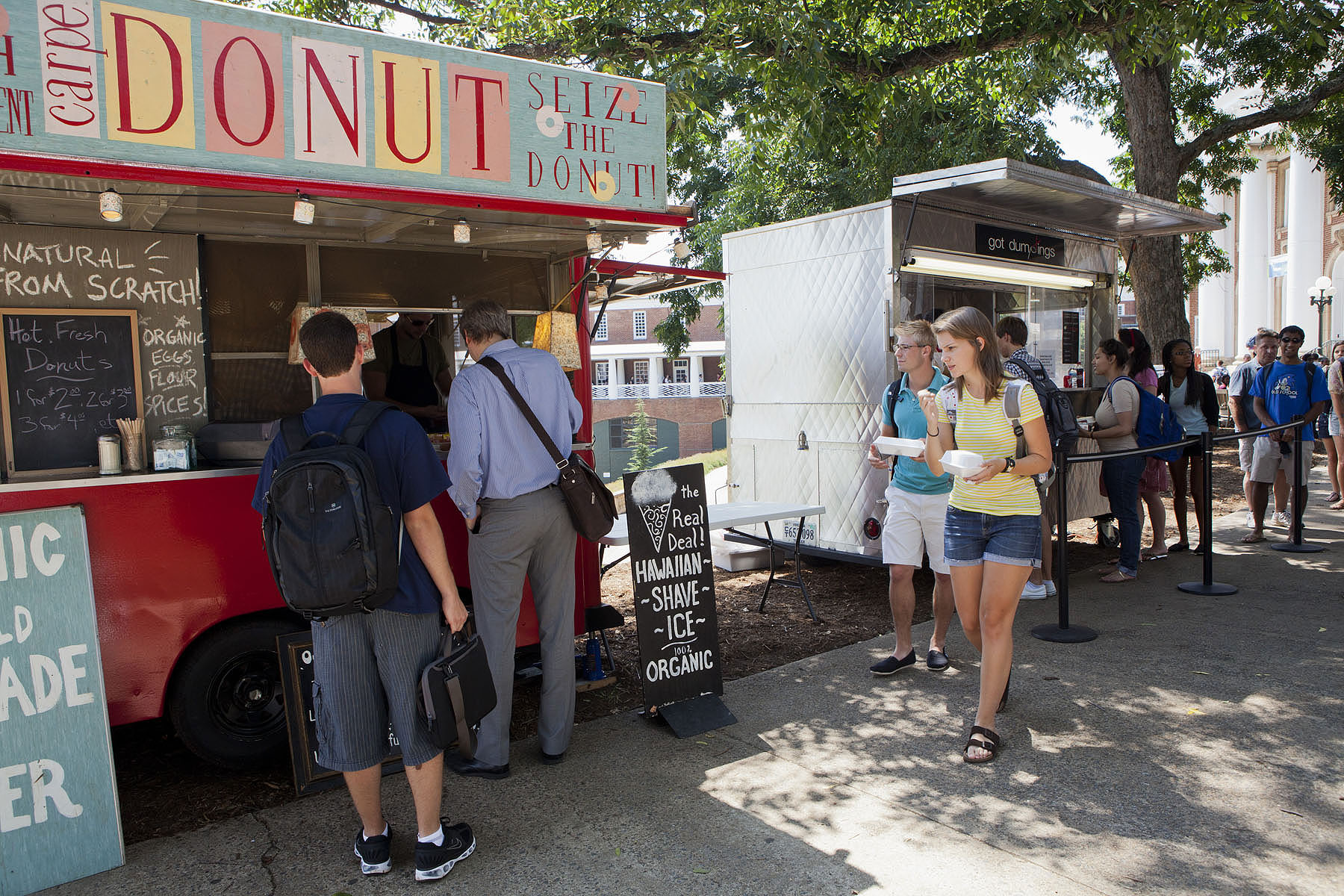 Six food trucks – mobile kitchens with focused menus – will serve customers weekdays from 11 a.m. to 2 p.m. in and around the McIntire Amphitheatre. Two trucks, Steak Me Home Tonight and Ka-Pow, are managed by Dining Services; the other four – Carpe Donut, Last Call Dogs, Nacho Panda and Got Dumplings? – are local vendors contracted to U.Va. Dining.

The trucks serve a dual purpose of bringing food directly to students and providing an alternative to eating in Newcomb Hall, where ongoing renovations have temporarily reduced dining space. The trucks accept U.Va. meal plan's Plus Dollars, as well as cash and credit cards, for entrees mostly priced between $5 and $7.

"Food trucks are the hottest thing out there in dining these days," Brent Beringer, director of U.Va. Dining, said. "This is an effort to bring students the most exciting and up-to-date thing."

He said some other schools have experimented with food trucks, largely as a response to dining hall renovations.

Matt Rohdie, the self-described "donut guy" who operates Carpe Donut, has developed a following among the students during his four years in business. He produces organic, homemade apple cider doughnuts, with organic coffee and other beverages also on the menu.

He said he prefers to concentrate on one product he can do well, and determined there would be a market for hot, fresh doughnuts.

"We've catered jobs at the International Residence College, Brown College and the Springfests," Rohdie said. "We've done a lot of work at the University already. The students really like what we do, but the University is a large, untapped market for us."

Mobile food trucks and pop-up restaurants were voted the hottest trend in restaurant operations for 2011 by chefs and restaurateurs who responded to a National Restaurant Association survey, and food trucks are featured on the Food Network.

"U.Va. Dining is always looking for the next thing evolving in dining service," said Bryan Kelly, executive chef at U.Va. Dining. "We're not concerned about where we've been, but where we are going."

Beringer said Dining Services worked hard to line up a variety of flavors for lunch.

"This is small-menu, high-quality food cooked as fresh as possible, to catch the street food appeal," Kelly said. "This is not sit-down, 'Let's-have-a-fancy-meal.' This is a 'keep-on-walking' thing."

Kelly said trucks such as Ka-Pow, which serves "Asian quesadilla noodle bowl," appeal to the "whimsical nature of the culture," whereas Steak Me Home Tonight, with a menu of Philly cheese steak sandwiches and hamburgers, offers more traditional fare.

"This is the up-and-coming street food," Beringer said. "It will be Korean flavors in Mexican shapes."

Beringer said the program is an experiment, and the vendor lineup could change over time. And while the food trucks will be at the amphitheater five days a week, they will work around events scheduled for that venue, he said, and some may be deterred by inclement weather.

"We will use the trucks for special events and concessions, and will be experimenting with a breakfast option in the mornings," said Nicole Jackson, marketing manager for Aramark Inc., which operates U.Va. Dining. Beringer said that two trucks will experiment with breakfast service for University employees at Fontaine Research Park and Carruthers Hall.