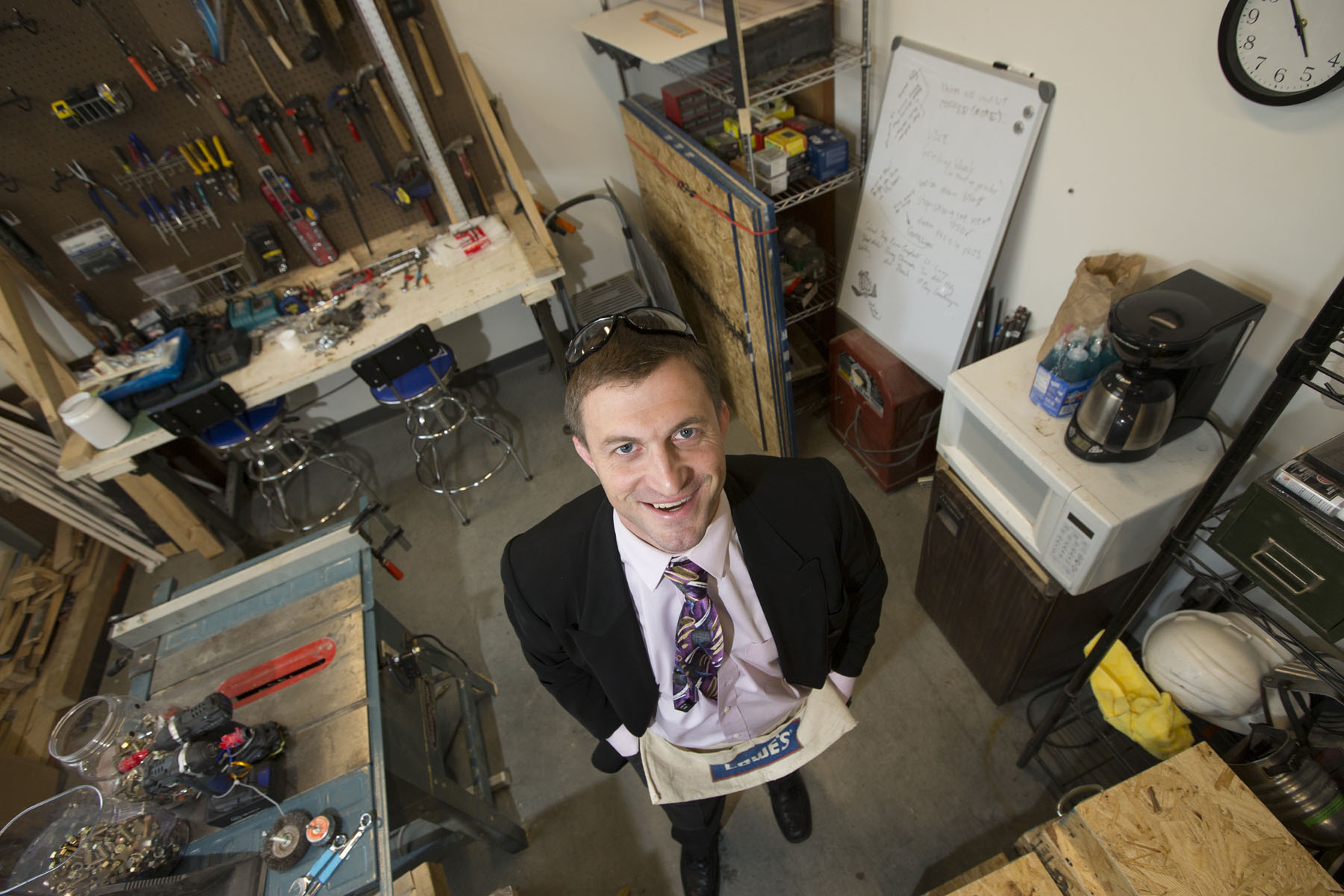 Nick Goddeau enjoys the sense of satisfaction from having built something.

“I like the tangible aspects of the fruits of the structural engineer’s labors,” he said. “I also like designing buildings, sizing the correct beams and columns, and their connections, to carry the various loads.”

But these are not conclusions that Goddeau, who will graduate May 18 from the University of Virginia’s School of Engineering and Applied Science with a bachelor’s degree in civil and environmental engineering, came to quickly.

At 35, he has already been a United States Marine Corps officer who fought in Iraq, a defense contractor for the U.S. Navy and a mathematics teacher in Antwerp, Belgium. Along the way he earned a bachelor of arts degree in psychology from Cornell University and a master’s degree in education from National University in La Jolla, California.

“I believe that my non-traditional path and additional experience has been a huge advantage to me as an engineering student,” said Goddeau, a Massachusetts native born in Pittsfield and raised in Foxboro. “I have many more experiences to draw upon when considering novel situations. I’ve likely made more mistakes than my academic peers, so I can draw upon that knowledge in navigating situations.”

Goddeau brings a lot to the table, said Catherine Baritaud, a lecturer in the Department of Engineering and Society.

“Nick knows what he wants, and he loves what he’s learning,” Baritaud said. “It’s infectious, and other students want to work with him. Nick has the ability to integrate his rich and varied life experiences with the present and into the future.”

Having been a teacher, he understands how to listen and think critically, more so than he did as a younger man at Cornell, Goddeau said.

“I understand more now than I did when I was getting my first degree the importance of ‘getting the concept’ over ‘getting the grade,’” he said.

While still at Cornell, Goddeau decided to join the Marines. “I wanted some direction and I was athletic, so I wanted something with some physicality to it,” he said. “I knew by then I did not want to sit in a lab and do research.”

He already was commissioned by the time of the Sept. 11, 2001 terrorist attacks in New York, Virginia and Pennsylvania. While a Marine, Goddeau was the adjutant to the commanding officer, which meant he was involved in all awards, performance evaluations, policy, legal proceedings, congressional inquiries, promotions and general correspondence.

In Al Asad, Iraq, Goddeau was adjutant for the unit and base defense watch officer, supervising the Marines maintaining the security of the base. He later supervised drill instructors in the recruit depot in San Diego.

After leaving the Marines, he was a defense contractor for the Navy, implementing an identification card system on the Navy bases throughout Europe.

Then came the next career change; he took a job teaching math to teenagers in Antwerp.

“I wanted to be a math teacher at the community college level,” he said. “I really like calculus and cranking through mathematical problems to arrive at solutions.”

To do that, he needed a degree in mathematics, or in a mathematics-oriented topic, which pushed him into engineering, where he thought the course content would be more interesting to him than pure mathematics. He found he had a much greater appreciation of crunching numbers if the numbers had a concrete significance.

“It had to have meaning, such as, ‘How much steel do I need to hold this much weight of a building?’,” he said.

“When I started taking the engineering-specific coursework, though, I found that I truly loved it,” he said. “As I progressed technically within engineering, and more specifically the structural and civil engineering courses, I knew I had found what I am supposed to do.”

While he avidly participated in the Student Steel Bridge Project – in which students construct scale-model bridges to a set of specifications, considering performance and economy – Goddeau sees himself working with buildings.

“The Student Steel Bridge is a project that is a perfect intermediate step between the academic theory taught in the classroom and the real-world project that will be designed for a company upon graduating,” he said. “From a technical perspective, I’ve gained a much firmer understanding than I would otherwise have had due to the project. Ultimately, though, I like buildings and foundations more than bridges. In the parlance of industry, I’m a vertical guy, not horizontal.”

Goddeau sees himself working on residential, light commercial or industrial buildings. While a student, he has been working part-time at Schnitzhofer and Associates LLC of Charlottesville and Staunton, a structural engineering consulting firm.

“I enjoy working on older buildings that need attention, such as a 1950s retrofit,” he said. “I have done some work with historic houses from the early 1900s.”

Because of his passion for what he is doing, Baritaud sees Goddeau making substantial changes in workplaces, classrooms and boardrooms.

“He is passionate about engineering education,” she said. “He is also fun, easygoing, a marvelous wit, is never condescending or caustic. Nick is a valued mentor and friend.”

Goddeau said his accumulated experiences will help him in his new career, just as they did in the classroom. With his training in psychology, learning how people act and react, Goddeau is prepared to deal with clients. His experience teaching gives him an advantage in explaining a project or an idea. His experience in the Marines taught him tenacity and how to adapt and overcome obstacles.

“Employers like to know that I am older, have a bigger resume and am bringing more experience to the table,” he said.

Nor is he shy about trying new things.

“If you don’t get yourself out of your comfort zone to learn something new, things can get boring and monotonous,” he said.

A Year We Will Never Forget: 2019-20 in Review END_OF_DOCUMENT_TOKEN_TO_BE_REPLACED

‘What Will You Carry With You?’ Remarks From UVA President Jim Ryan END_OF_DOCUMENT_TOKEN_TO_BE_REPLACED