Four New Members Appointed to U.Va. Board of Visitors 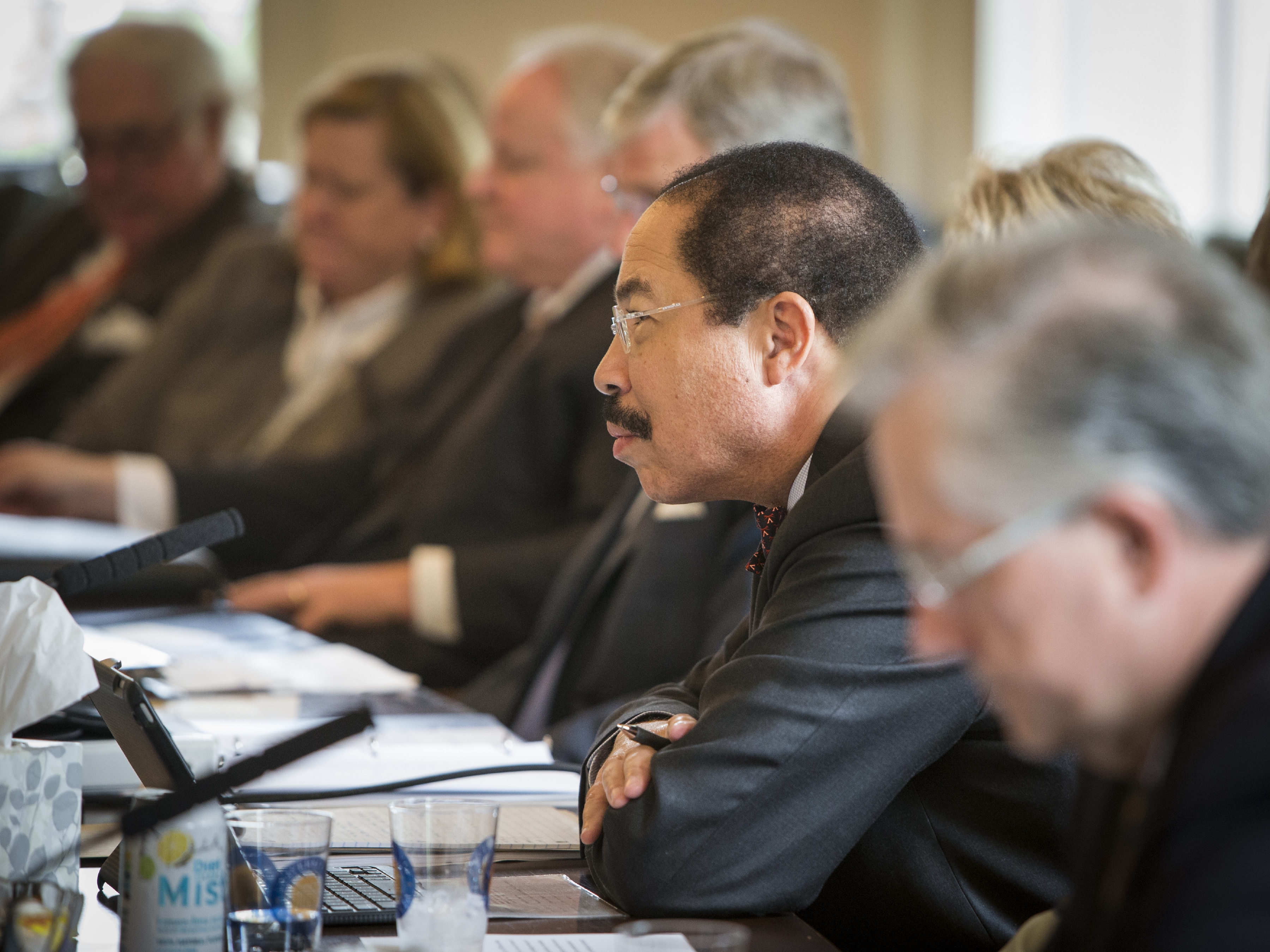 Gov. Terry McAuliffe today announced the appointment of four new members of the University of Virginia Board of Visitors.

The new members collectively have deep ties to the University, from undergraduate to professional degrees, with continuing engagement as volunteers, philanthropists and parents.

“On behalf of the Board of Visitors, I welcome each of these outstanding individuals and look forward to working with them to address the numerous opportunities before this great institution,” Rector George Keith Martin said. “Their collective wisdom and experience in the public and private sectors will serve the University well as we work to advance excellence in teaching, research, patient care and service at one of the nation’s premier public higher education institutions.”

“Each of these individuals has demonstrated significant commitment to the University and I look forward to working with them as we begin implementing the important initiatives and priorities associated with the University’s strategic plan,” Sullivan said. “This is an exciting time for the University of Virginia.”

The governor’s board appointments are:

• L.D. Britt, M.D., Brickhouse Professor of Surgery and chair of surgery at Eastern Virginia Medical School in Norfolk. A practicing physician, he is a former rector and member of the Norfolk State University Board of Visitors and a former regent of the Uniformed Services University of the Health Sciences in Bethesda, a position he was nominated to by President George W. Bush. Britt is the first African-American in the U.S. to hold an endowed chair in surgery. He is actively involved in numerous community organizations and is the recipient of numerous awards, including the NAACP Man of the Year Award for Hampton Roads. He is a member of the Jefferson Scholars Regional Selection Committee and is trustee emeritus of the College and Graduate School of Arts & Sciences Foundation. He received his bachelor’s degree from U.Va. and is a graduate of the Political Leaders Program at the U.Va. Sorensen Institute for Political Leadership. Britt earned a medical degree and master’s in public health degree from Harvard Medical School and the Harvard School of Public Health, respectively.

• Frank Maxwell “Rusty” Conner III, a partner with Covington & Burling LLP in Washington, D.C. He is a former partner with DLA Piper and a former partner-in-charge with Alston & Bird LLP. He chairs the Metropolitan Washington Airports Authority board and is a trustee of Ford’s Theatre in Washington. Conner is the former chair of the Virginia College Savings Plan. He is a life member of the U.Va. Alumni Association, former member of the U.Va. Parents Committee and a past president of the U.Va. Club of Atlanta. He received a bachelor’s degree in economics and a law degree from the University.

• Barbara J. Fried, chair emerita and former general counsel and executive vice president of Fried Companies Inc., a real estate development and property management firm based in Ruckersville and Crozet. She is a director of the U.Va. Foundation, member and immediate past chair of the Sorensen Institute for Political Leadership State Advisory Board and a former director of the Virginia Foundation for the Humanities. Fried is a former member of the Virginia Port Authority Board of Commissioners and a former trustee of the George Mason University Foundation. Fried is active in many community organizations in and around Crozet. She earned a bachelor’s and law degree from the University of Chicago and a master’s degree in history from U.Va.

• John Granger Macfarlane III, managing partner of Arrochar Management LLC. He is the former COO and vice chair of the Tudor Investment Corporation based in Greenwich, Connecticut. He formerly worked with Salomon Brothers, where he was treasurer and managing director and head of the U.S. and Asian fixed income derivative desk. His U.Va. involvement includes being a trustee and former chair of the Darden School Foundation, member of the College and Graduate School of Arts & Sciences Foundation and former chair and director of the University of Virginia Investment Management Co. Macfarlane is involved with several community organizations. He earned a bachelor’s degree in classical studies from Hampden-Sydney College and an MBA from U.Va.’s Darden School of Business.

“These fine individuals volunteered their time and talent in service to the University and the commonwealth and we are extremely grateful,” Martin said. “All have helped elevate this institution and position it for sustained excellence. A significant part of that contribution for members of this board has included development, approval, and now, implementation of our Cornerstone Plan. I congratulate all of our board members for facilitating this crucial process and offer special gratitude for Lin Rose for his leadership as co-chair of the Special Committee for Strategic Planning.”

Sullivan added, “I have appreciated the opportunity to work with the outgoing board members, and thank them for their many contributions to U.Va. I hope to work with each of them in future volunteer capacities.”

A Year We Will Never Forget: 2019-20 in Review END_OF_DOCUMENT_TOKEN_TO_BE_REPLACED

‘What Will You Carry With You?’ Remarks From UVA President Jim Ryan END_OF_DOCUMENT_TOKEN_TO_BE_REPLACED