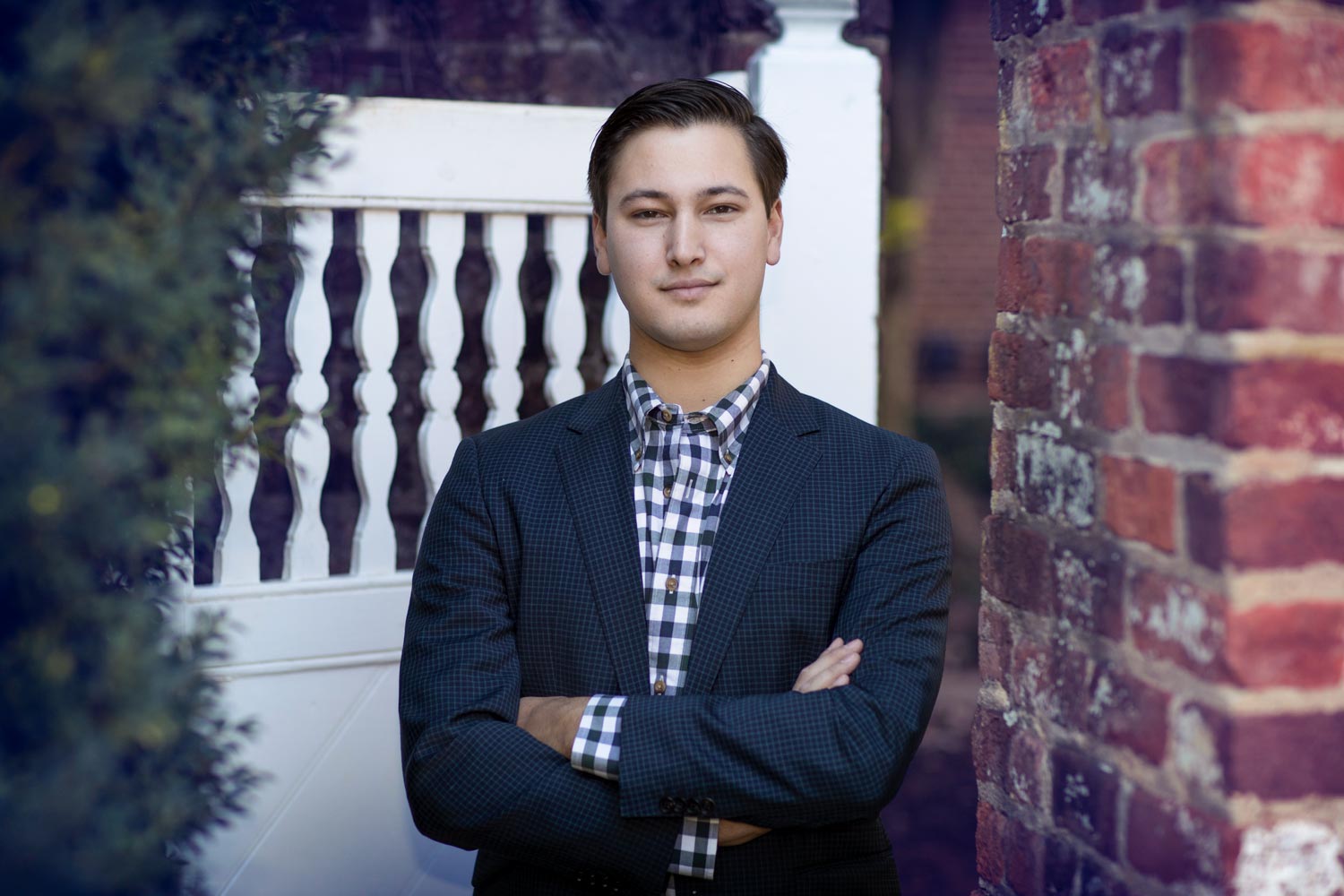 John Brake will pursue a one-year master’s degree in global affairs in China with a Schwarzman Scholarship. (Photo by Dan Addison, University Communications)

A University of Virginia politics and Spanish major will pursue a one-year master’s degree in global affairs in China, thanks to a Schwarzman Scholarship.

The Schwarzman Scholarships for graduate study in China were created in 2013 by private equity firm manager Stephen Schwarzman, who modeled them on the Rhodes Scholarships. The program, housed in Schwarzman College at Tsinghua University in Beijing, fully funds participants’ expenses, including travel costs and a modest personal stipend. The courses are taught in English and draw on some of Tsinghua University’s most accomplished professors, as well as visiting scholars from leading global institutions. Brake is the third Schwarzman winner at UVA.

“As is increasingly true in so many areas, the most interesting questions in international politics today bend toward Beijing,” Brake said. “So many of our normative assumptions about the universality of liberal democracy and our empirical certainties about U.S. power seem less sure in light of China’s rise. That’s a cliché, but as someone who wants to work at the intersection of political science and foreign policy, I ignore it at my peril.”

Brake views the Schwarzman Scholarship as an “opportunity to begin my career with a deep dive into China’s domestic politics and Chinese discourses on its role in the world that will immeasurably enrich my scholarship, give renewed meaning to my political aspirations and equip me with the intellectual humility that is so vital to my fields of interest.”

At UVA, Brake said his main interest is in international security, with a focus on nuclear nonproliferation. His politics honors thesis explored the relationship between how individuals understand prestige in international politics and their preferences for different nuclear weapons policies. It won UVA’s 2017 Stevenson Prize for best honors politics thesis, and inspired an article he wrote for the Bulletin of the Atomic Scientists in the summer.

“I’ve developed that topic further in my second politics thesis, which uses survey experiments to show how contested norms lead different people to assign prestige to different nuclear policies,” Brake said. “This work implicates broader themes in U.S. grand strategy and international relations theory, including the formation of national and other social and cultural identities. I’ve also explored those identities and their artistic manifestations through a few different Spanish projects, culminating in my thesis on the architecture and literature of medieval Iberia.”

John Owen, Taylor Professor of Politics and chair of the Woodrow Wilson Department of Politics, said Brake is a highly gifted student who understands abstract concepts quickly and goes well beyond what is expected of him.

“One thing that makes him so unusual is that his left and right brains are both well-developed and neither seems to predominate; he marries a social scientist’s logical acumen to a humanist’s hermeneutical sensitivity,” Owen said. “He also is boundlessly curious about politics and societies across the globe and through history. All of these traits are on display in the research he has done last year and is carrying on this year – research ranging from why India has nuclear weapons and South Africa does not, to connections between Visigothic architecture and cultural openness in medieval Spain.”

Associate professor of politics Gerard Alexander said Brake puts time and effort into actively thinking through his arguments and counter-arguments.

“The result is that his comments enrich the classroom, and his writing is especially thoughtful and effective,” Alexander said. “He’s also unusually ambitious as a student, developing his own arguments past an initial step or two. That makes him not just a good researcher, but a promising young scholar. He’ll take great advantage of a Schwarzman Scholarship, and he and the program are lucky to have found one another.”

A Jefferson Scholar and an Echols Scholar, Brake received high honors after graduating from the politics honors program in 2017. Besides the Stevenson Award, he earned the Wyatt Family Award for study overseas, given by the Spanish Department, and a Harrison Undergraduate Research Award. He was named “Best Counselor” by the University Judiciary Committee and is a member of the Raven Society and Phi Beta Kappa.

He was vice chair for trials on the University Judiciary Committee, chair of the Undergraduate Research Network, editor-in-chief of the “Seriatim Journal of American Politics and Political Theory,” vice president of the Jefferson Literary and Debating Society and a volunteer for the Madison House Latino and Migrant Aid Program. He was an intern for the State Department’s Bureau of Arms Control, Verification and Compliance in the summer.

A graduate of Strath Haven High School in Wallingford, Pennsylvania, he plans to pursue a law degree and a Ph.D. in political science, focusing on international security and nonproliferation from the perspective of designing and enforcing international legal regimes that maintain global peace and stability.

“I hope to teach and pursue my research at a law school, and some day to run for public office, first at the local level and perhaps even nationally, in order to promote my vision of liberal internationalism as a guide for the United States’ global role in the new century,” he said.

Brake said he feels privileged to be a Schwarzman Scholar.

“I know this is a once-in-a-lifetime opportunity to orient myself to issues that I believe have unparalleled importance for the world today – China’s emergence as a truly global power, and its effects on world order,” he said. “I applied for the program because I felt unprepared to grapple with those issues, in terms of language, relationships and my understanding of Chinese history and politics. I also knew that the program would convene an incredibly rewarding cohort of people with diverse interests, and I look forward to learning from and getting to know my fellow scholars.”

When Less Is More: How Harnessing the Power of Subtraction Can Add to Life END_OF_DOCUMENT_TOKEN_TO_BE_REPLACED