A Galaxy of Fireflies – or Not: Researchers Study Lighting’s Effects on the Insects

If a bug has ever had charisma, it’s a common eastern firefly, flitting in the night.

The males do a J-shaped dance while flashing their taillights, seeking the attention of females on the ground. If interested, the females smile back, in effect, flashing their own taillights. It’s a ritual of nature, and one of the most pleasant visual effects of a summer evening.

But studies indicate that fireflies may be decreasing in number, and scientists are asking why. One theory is that light pollution – human-made light – may be interfering with the insects’ courtship behavior, since they do it in the dark.

“It’s possible that the artificial extension of daylight into night from human development may be disrupting the dark/light cycles of fireflies and their behavior,” University of Virginia environmental sciences professor Kyle Haynes said.

Under Haynes’ mentorship, doctoral student Ariel Firebaugh is conducting a long-term study on the ecological effects of artificial light on two firefly species at UVA’s Blandy Experimental Farm, near Winchester. Preliminary findings suggest to Haynes and Firebaugh that LED lights – the type of energy-efficient bulbs now routinely used for house lights, streetlights and parking lots – may in fact alter behavior patterns. They are trying to understand how – whether fireflies simply move on to darker areas, or if they actually mate less around brightly lit areas, resulting in lower populations. 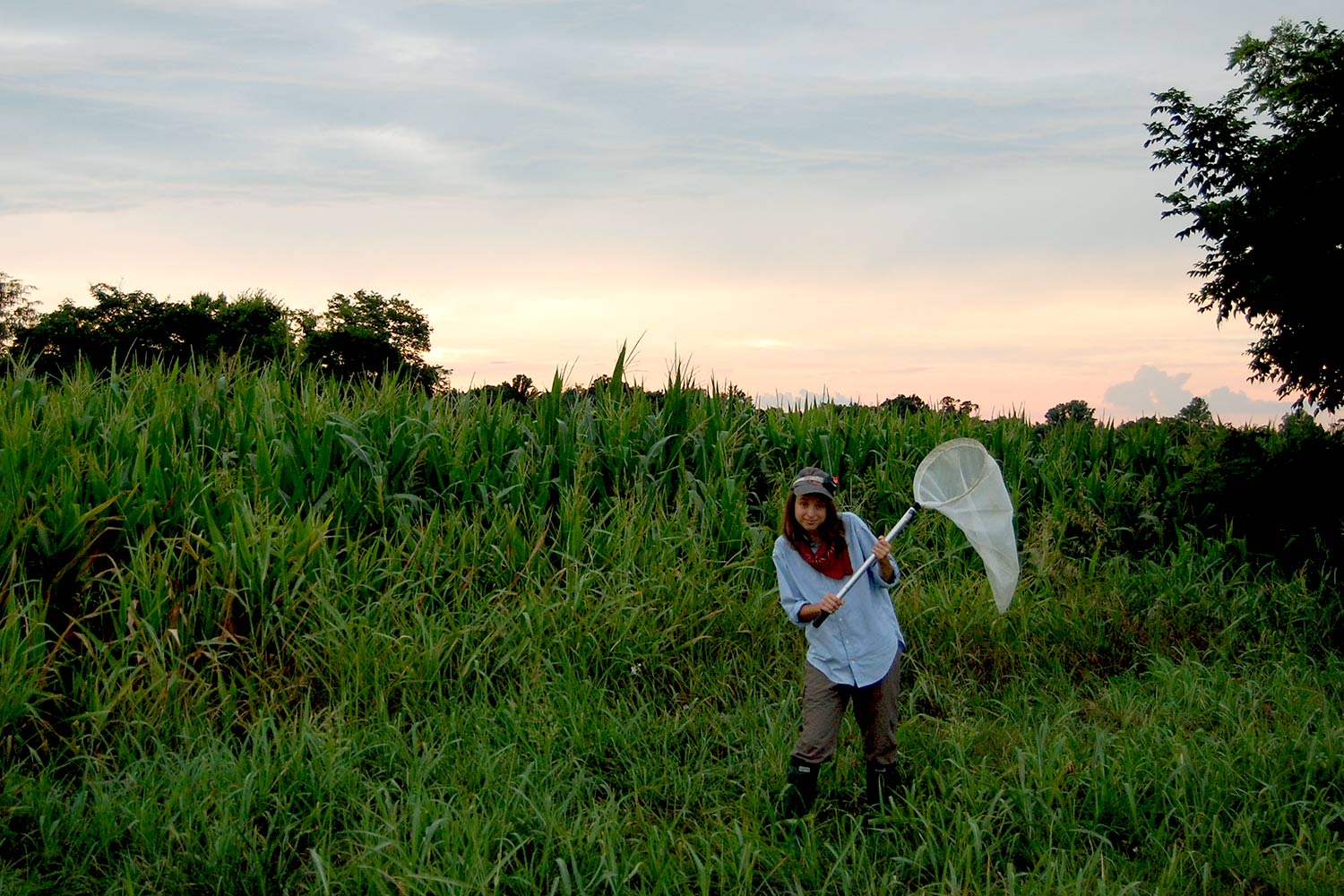 To test this, they have marked off eight large field plots at Blandy Farm – half lit by LED floodlights, the other half unlit. Their censuses over nearly three summers are showing that flashing activity of one of the firefly species, Photuris versicolor, in the lit plots has decreased compared to the populations in the dark plots, and the species’ numbers also may be lower in the lit plots. After capturing, marking and releasing fireflies in the lit and unlit plots, the researchers have found no evidence that the insects move away from the lights, or are attracted to them.

And observations of the mating behavior of the common eastern firefly (Photinus pyralis) show that while the males continue to flash normally while seeking females in the lighted plots, the females there either stop responding, or they reduce their flashing responses, apparently resulting in the males having a harder time finding them. Meanwhile in the dark plots, mating continues as normal.

“This indicates that courtship behavior of fireflies is getting disrupted by the LED floodlights,” Haynes said. “LED bulbs emit light at all wavelengths, like sunlight, and this type of light may be more disruptive to nocturnal wildlife than the older outdoor light bulbs, such as sodium streetlights, which emit light at fewer spectral wavelengths. The new bulbs are more energy-efficient, but unfortunately may be disruptive to organisms.”

Fireflies, which are actually a type of beetle, evolved in a world illuminated at night only by stars and the moon. Their behavior is timed to the cycles of day and night and the seasons. They communicate with their illuminated lower abdomen, using an enzyme called luciferase – not only for mating, but also to ward off predators. Each species has its own communication patterns: different flash rates and durations, color tones and intensities. Once a female and a male come to agreement, they “hook up,” tail-to-tail, for hours at a time. The next night, they seek out new mates. 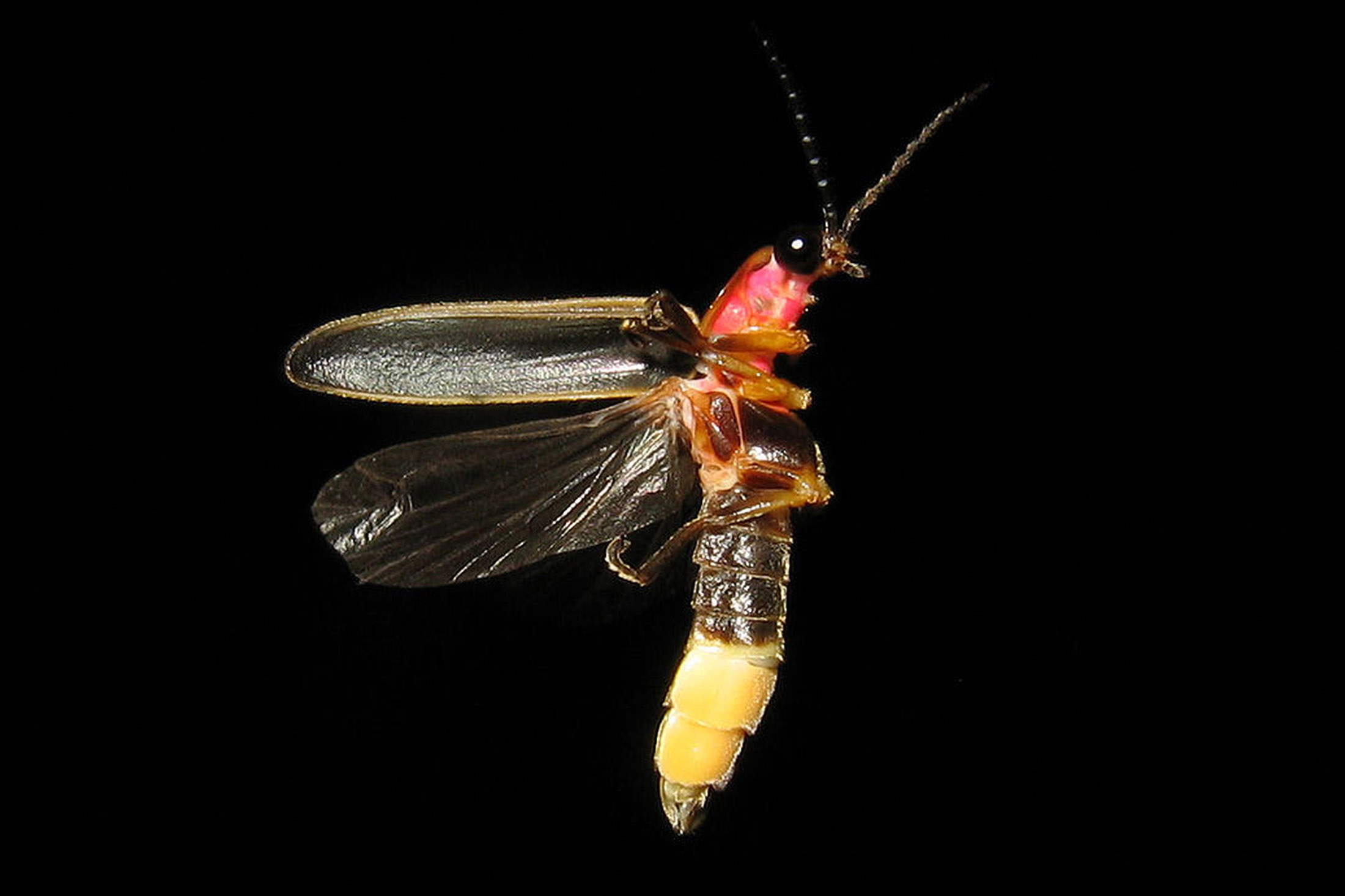 Fireflies spend most of their lives as larvae, underground or in decaying vegetation, feeding on organic matter, such as rotting leaves. Their lower abdomens glow underground, too, telling potential predators, “I’m toxic!” (fireflies produce bad-tasting chemicals). Some species are predatory, feeding on the larvae of other species, and on slugs, snails and worms.

At different points during the spring and summer, depending on the species, they enter a brief pupae stage, and then emerge as flying insects. They tend to stay close to where they were born and lay their eggs there.

Like other native species, fireflies are important to the overall health of ecosystems, serving to decompose organic matter, and as prey to certain other insect species and to some species of spiders. If their habitat is disrupted by development, or sprayed with insecticides and herbicides, their populations and range may decrease.

“Many insects are nocturnal,” Haynes said. “Artificial light from development could also be having strong impacts on species other than fireflies, not just the ones we easily see. If we want to conserve these important components of nature, we should care about reducing light pollution.”

Note: Each June, Blandy Farm hosts a Family Firefly Festival. Blandy educators provide an illustrated talk for adults and older children, a shorter talk for younger children, and display fireflies in jars and under microscopes. The event includes craft activities and outdoor games. At dusk, the hosts guide attendees to a meadow to catch and release fireflies and observe their courtship behavior.

Blandy Farm’s natural setting of 700 acres has one of the largest concentrations of fireflies in Virginia, providing a dramatic display of hundreds of thousands of points of light as the insects dance over fields and through forests.

For information about Blandy Experimental Farm and its public events, click here.