George H.W. Bush on Grounds: Looking Back at Former President’s Legacy at UVA 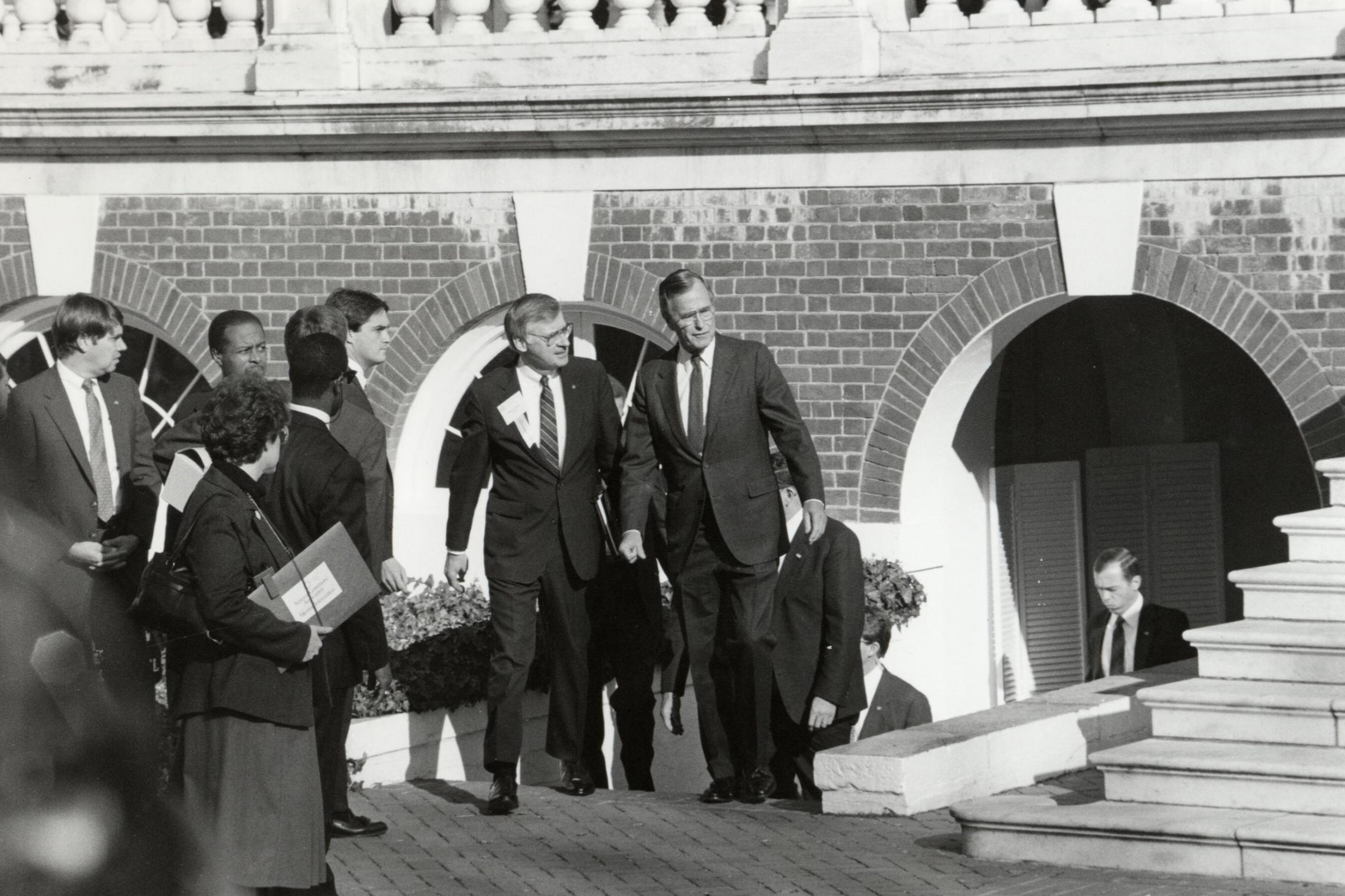 When George H.W. Bush died Friday at age 94, he left behind a considerable record of public service, including as a congressman, director of the Central Intelligence Agency, United Nations ambassador, Ronald Reagan’s vice president and the 41st president of the United States.

That career also intersected with the University of Virginia several times, including during a memorable commencement speech to the Class of 1981 and a seminal 1989 summit on public education that drew all the nation’s governors to Grounds.

Professor Larry Sabato, director of the Center for Politics, was on hand for both events, and taught Bush’s youngest son, Marvin Bush, a UVA graduate.

“President Bush was the last occupant of the Oval Office who served in World War II, and heroically so,” Sabato recalled. “In many ways he reflected the attitudes and virtues of the Greatest Generation. He believed in public service, and sacrificed to serve over and over in important positions.”

Sabato praised Bush for his effective handling of the fall of the Soviet Union and its Eastern European empire, and for broad coalition-building for the Gulf War, as well as for his work on the American with Disabilities Act, which Sabato called his “most significant domestic achievement.” And he remembers his visits to Grounds.

When Bush arrived at UVA on May 24, 1981, to address the graduating Class of 1981, he was relatively new to his position as vice president.

Coming off a bruising campaign with Ronald Reagan in 1980, in which he’d sought the Republican nomination for president and then agreed to serve as Reagan’s running mate, Bush used his speech to call for a more civil public discourse, score some points against political opponents, and to speak against the dangers of blind adherence to political dogma. 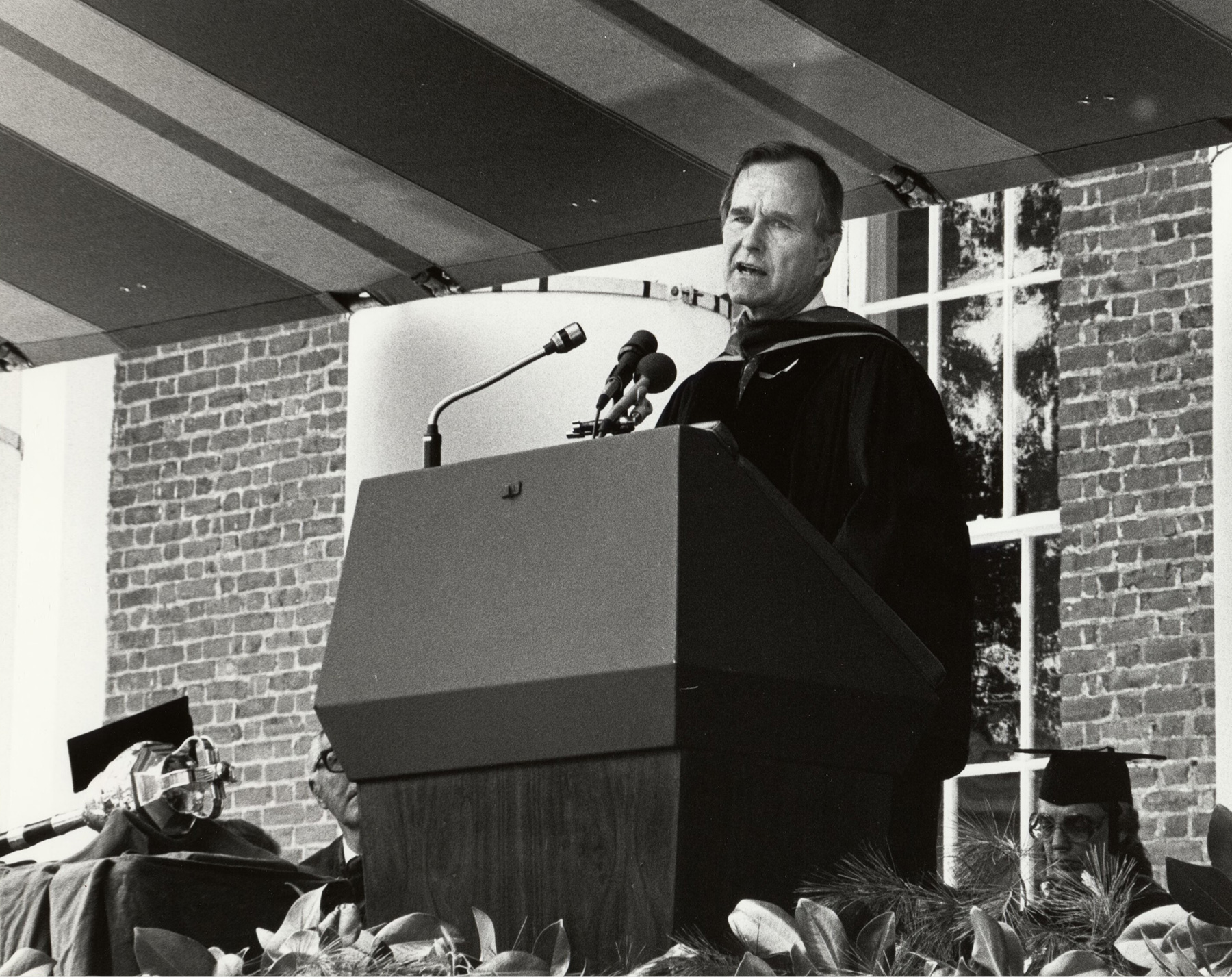 He referenced the deep social and political divisions of the 1960s and the lasting effect they had within government, with the media and in society generally.

“The result is that political debate on issues important to our country’s future has frequently become a matter of fixing labels and accusations on the opposition, not a contest of ideas freely and fairly argued,” he said.

Bush decried political tribe-think as being against the Jeffersonian tradition, and talked about the dangers of knee-jerk responses to issues of the day, including America’s role in confronting global human rights violations. Read the full speech.

“Some feel we must shout from the roof tops and beat our breasts and humiliate countries in order to effect change. We don’t agree,” he said.

For many UVA faculty and alumni, however, the speech’s policy and political implications are overshadowed by remembrances of a faulty audio system, an accidentally amplified profanity, and by the presence of rooftop snipers.

Sabato was in attendance. Faculty and student protestors demonstrated against some Reagan-Bush policies during the speech, he said, but it was a largely respectful event.

“What everyone remembers is the repeated breakdown of the sound system,” Sabato said. “We were all mortified, and Bush was understandably frustrated, and let people know it.”

The audio went in and out throughout the speech, including an incident in which it came back on just in time to catch Bush using some choice language.

“It was patched up and his address continued. But President [Frank] Hereford was furious, and correctly decreed that at all future graduations and other major ceremonies, there should be redundancy built into the system,” Sabato said. “The master of the psychology classroom, Professor Ray Bice, rigged up one of his famous ‘Bice devices’ and to my knowledge, we haven’t had an embarrassing breakdown since.”

Sadly, the one thing I remember from his graduation speech (UVA'81) was "Is this damn thing on?" We were so shocked that a President used bad language! Back when this Wahoo was naive and innocent.

The presence of sharpshooters on the top of Old Cabell Hall also stood out to many attendees.

“We’d expect this today, but it was something of a shock back then – but completely justified since President Reagan had only narrowly escaped assassination just a couple months before, and in fact was still recuperating,” Sabato said.

UVA again loomed large for Bush in 1989, when he was less than a year into his term as president. He selected UVA as the site of a summit on public education that drew all 50 of the nation’s governors to Grounds.

On Sept. 27 and 28, the governors and federal officials met to try and articulate a set of national goals around public education and the role of the federal government in meeting them. 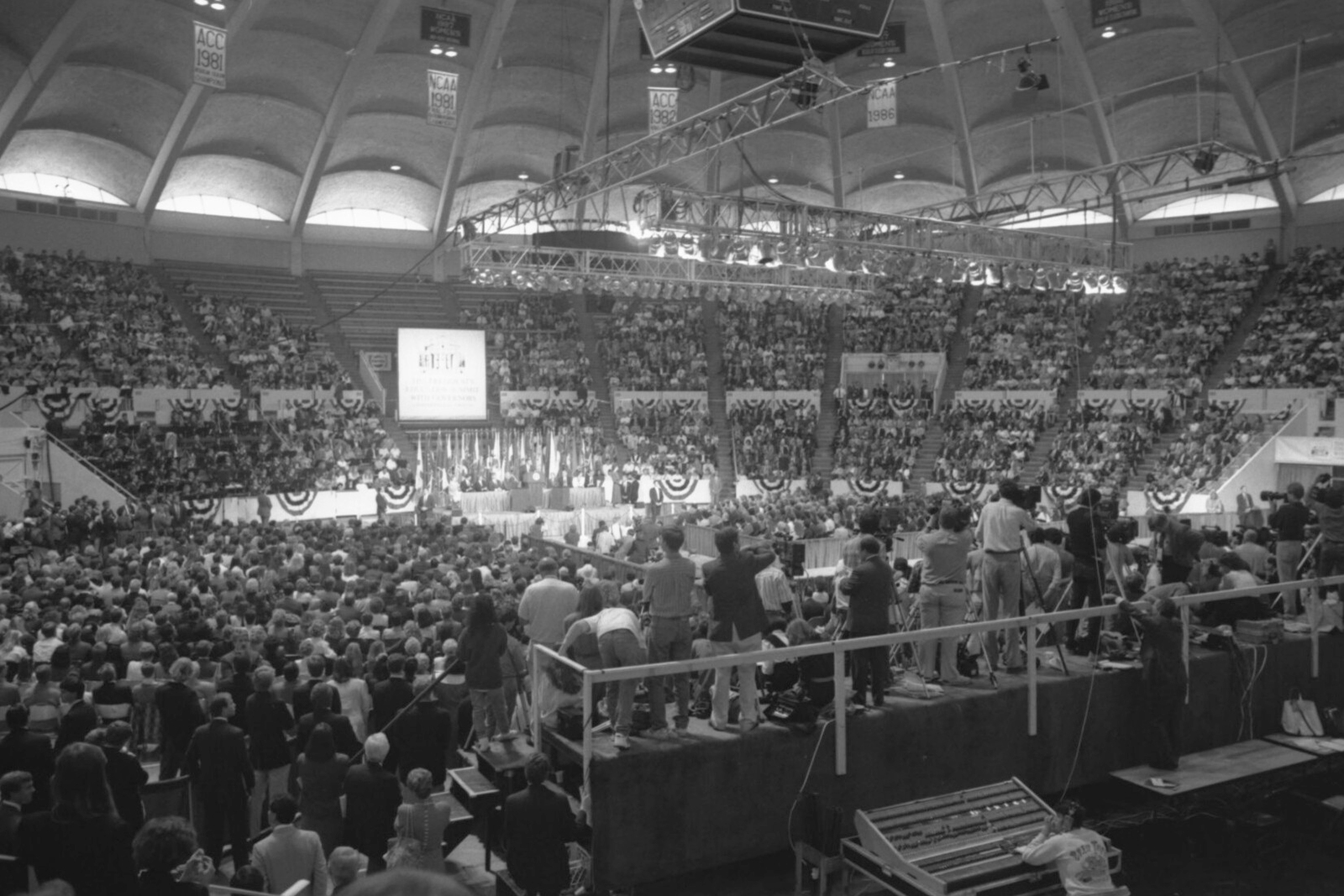 “This was one of the biggest stories of 1989, and there’s no question that the Bush family’s familiarity with the University influenced their choice of locale,” Sabato said. “I recall many buildings given over for a few days to accommodate the press. The Rotunda area was a forest of TV booms, satellite trucks and feverish activity. Provost Ed Floyd and his wife Peggy moved out of Pavilion II for at least a week to give the Secret Service a headquarters overlooking the Rotunda plaza, where a lunch for all the governors and their spouses was held.”

Absolutely. I was an organizer of the 1989 Education Summit he had at @UVA with the 50 Governors (was working for Gov Baliles then). Whatever you thought of the agenda, it was never about Pres Bush. It was about results.

Sabato recalled the event as being almost entirely non-partisan, and said Bush worked closely with a little-known governor of Arkansas, who was the head of the education task force of the National Governors Association. 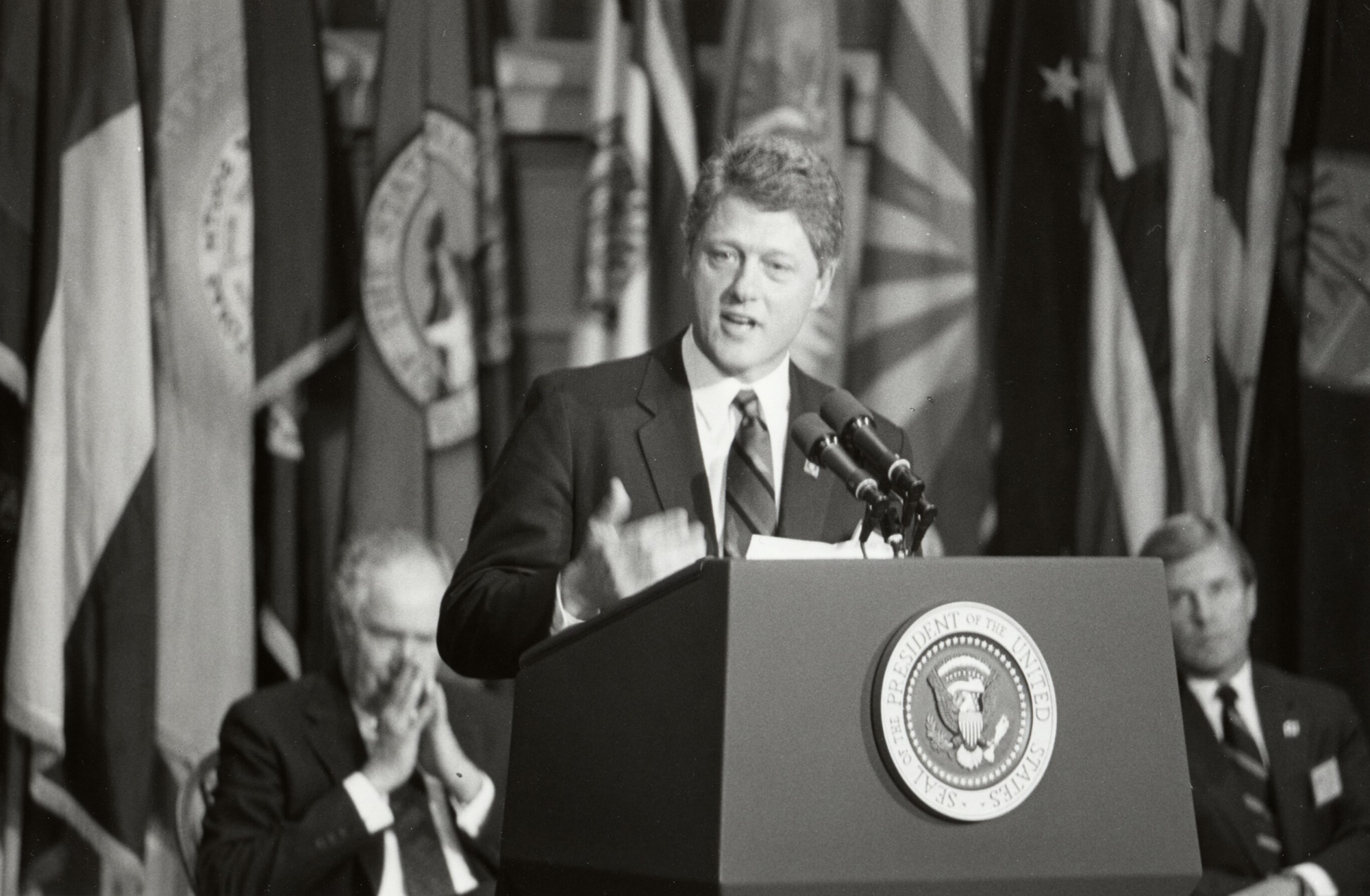 The summit was considered a bipartisan success by both the governors and the president, he said.

“I can still vividly recall President and Mrs. Bush walking down the Lawn with Bill and Hillary Clinton right beside them,” he said. “Of course, neither couple had a clue of what was to come in 1992.” 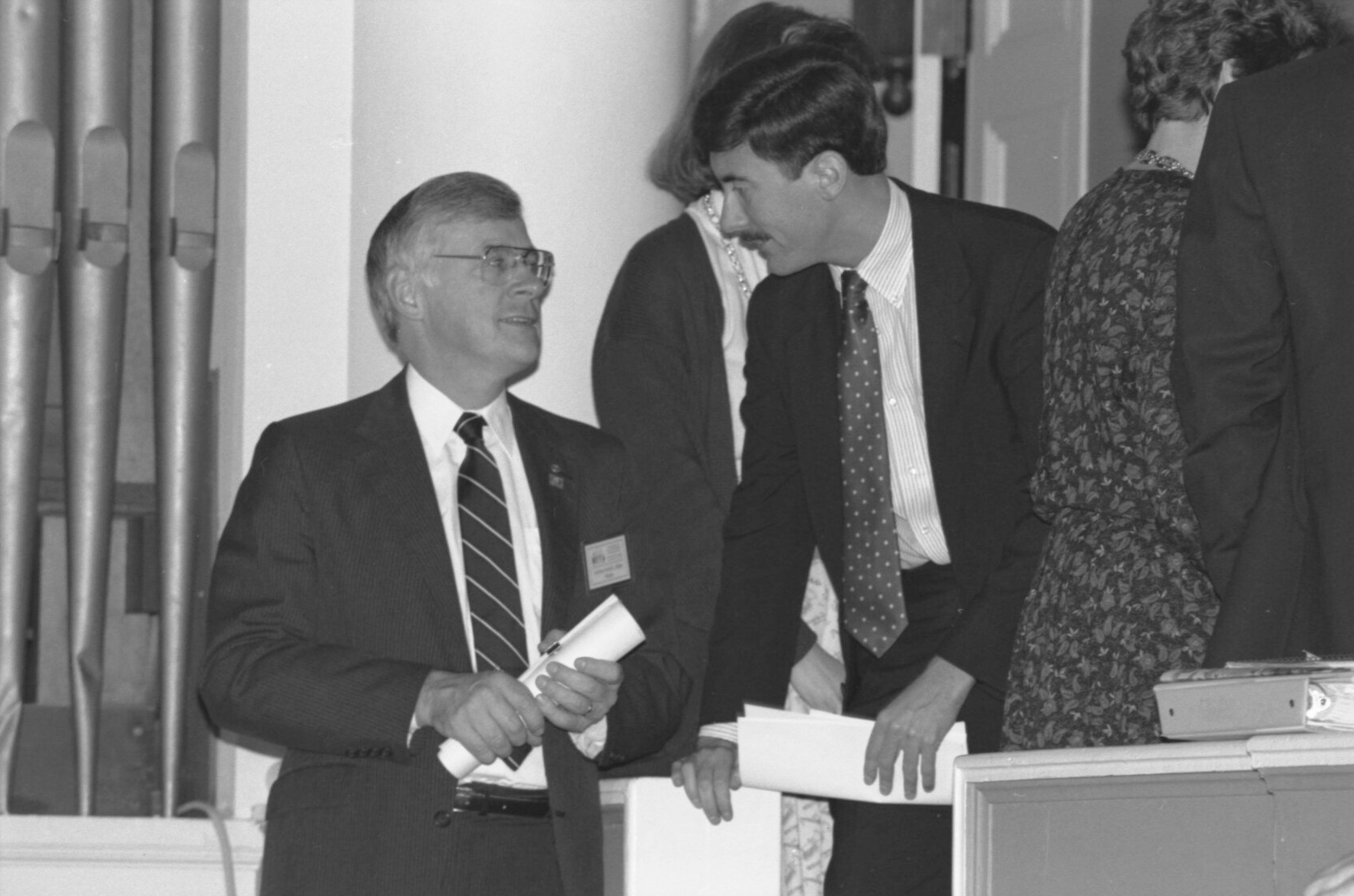