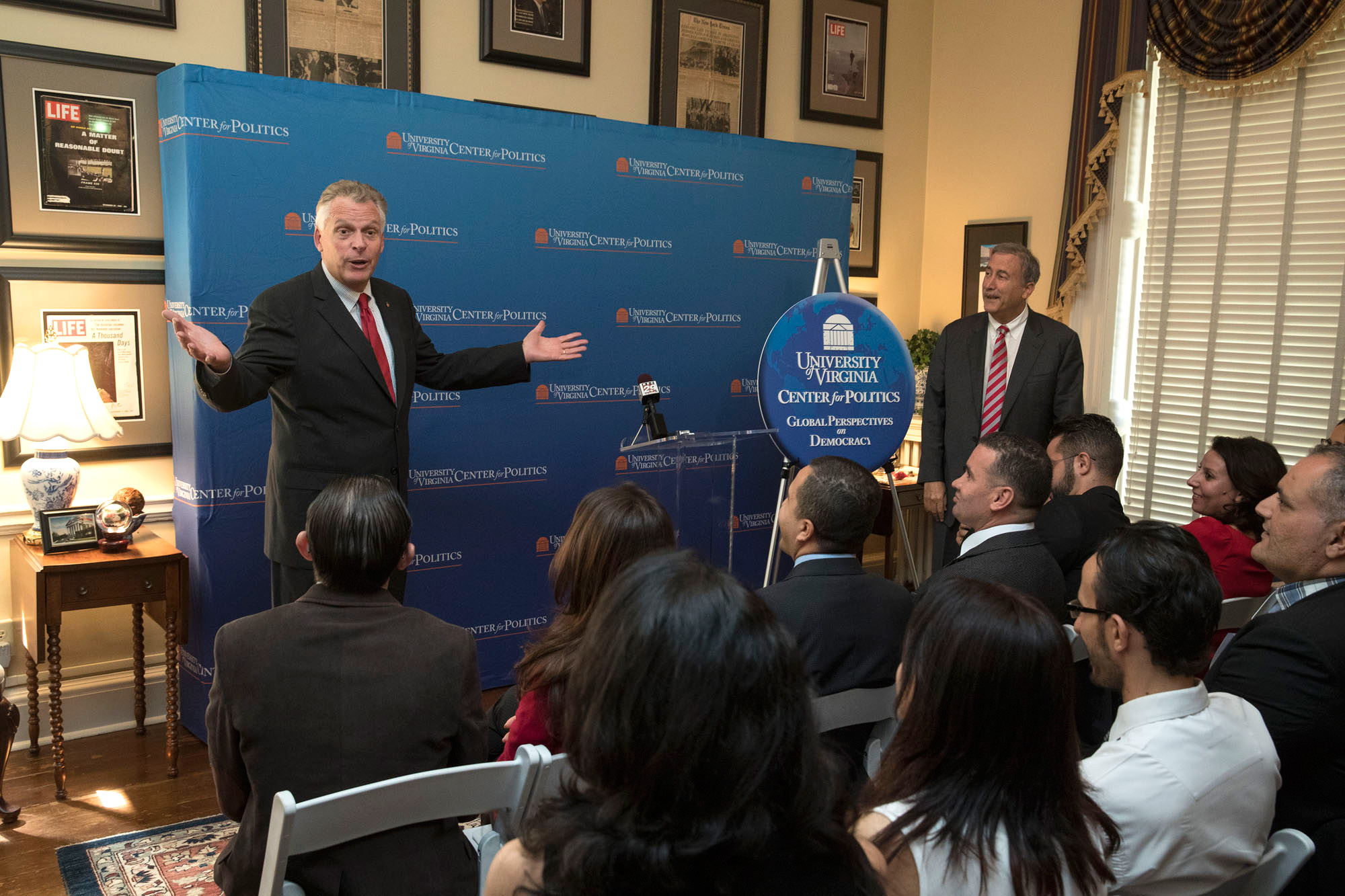 Inside Pavilion IV on the University of Virginia’s historic Lawn on Thursday afternoon, Virginia Gov. Terry McAuliffe candidly discussed civic engagement, democracy, business and economic opportunities and a range of political issues with a group of 25 government, nonprofit and business leaders from the Middle East and North Africa.

Those international leaders are participating in UVA’s Center for Politics’ Leaders for Democracy Fellowship Program, which intends to provide academic opportunities and practical experiences that will help them address political and social issues in their home countries.

“The participants are from a variety of professions; they are very much accomplished and many of them work in the areas of human rights in democracy,” Daman Irby, the center’s director of global initiatives, said. “Anytime you have the chance to speak with the executive of state, it’s unique, so this opportunity afforded them the ability to directly engage with a major elected official, which in many countries is not possible.”

McAuliffe told the fellows he believes education is the primary driver of economic success.

“Economic development comes down to education, and your education is what builds the workforce,” he said. “When you have jobs open, you have to make sure your graduates have the skills to match the jobs that exist.”

According to McAuliffe, that advice rings true in nations across the world, and he believes the United States can do more when it comes to spurring that economic development in the Middle East and North Africa.

“I think we, as America, have a real keen interest in getting peace to the Middle East,” he said. “And we need to ensure that all of those children have an opportunity for economic success and that they have a future in front of them. We have to make sure there is economic opportunity when they finish their education.”

Fellow Yara Karram came to UVA from Tel Aviv, Israel, where she is an in-house international tax services consultant for Ernest & Young, as well as an employee at Ashams Radio, an Arabic legal radio station.

“The governor gave me the feeling that we are part of this place and we are very welcome here, and this is how we all have felt since we entered the University,” Karram said. “To get an insight into his perspectives on the Middle East is really interesting for us to know.”

The Leaders for Democracy Fellowship Program is sponsored by the U.S. Department of State Bureau of Near Eastern Affairs’ Middle East Partnership initiative. It is operated by the Center for Politics’ Global Perspectives on Democracy Program, which has enabled the center to host foreign exchange groups since 2006. But this is the first time the Leaders for Democracy Fellowship Program has come to UVA, as well as the first time the Center for Politics has hosted a group of fellows from the Middle East and North Africa.

Upon finishing a five-week curriculum at UVA that focuses on leadership, peace and conflict mitigation, comparative politics, civic engagement, advocacy, communication and change management, the fellows will complete a nine-week practicum in Washington through a partnership with World Learning, a nonprofit organization that aims to advance leadership in countries throughout the world. When they return home, the fellows will implement civic action projects in their communities based on their experiences in the fellowship program.

“They’re going to go back to their home countries and be more prepared to engage their populations, get involved in their communities and really further human rights and democracy where they live,” Irby said.

For All of Us END_OF_DOCUMENT_TOKEN_TO_BE_REPLACED