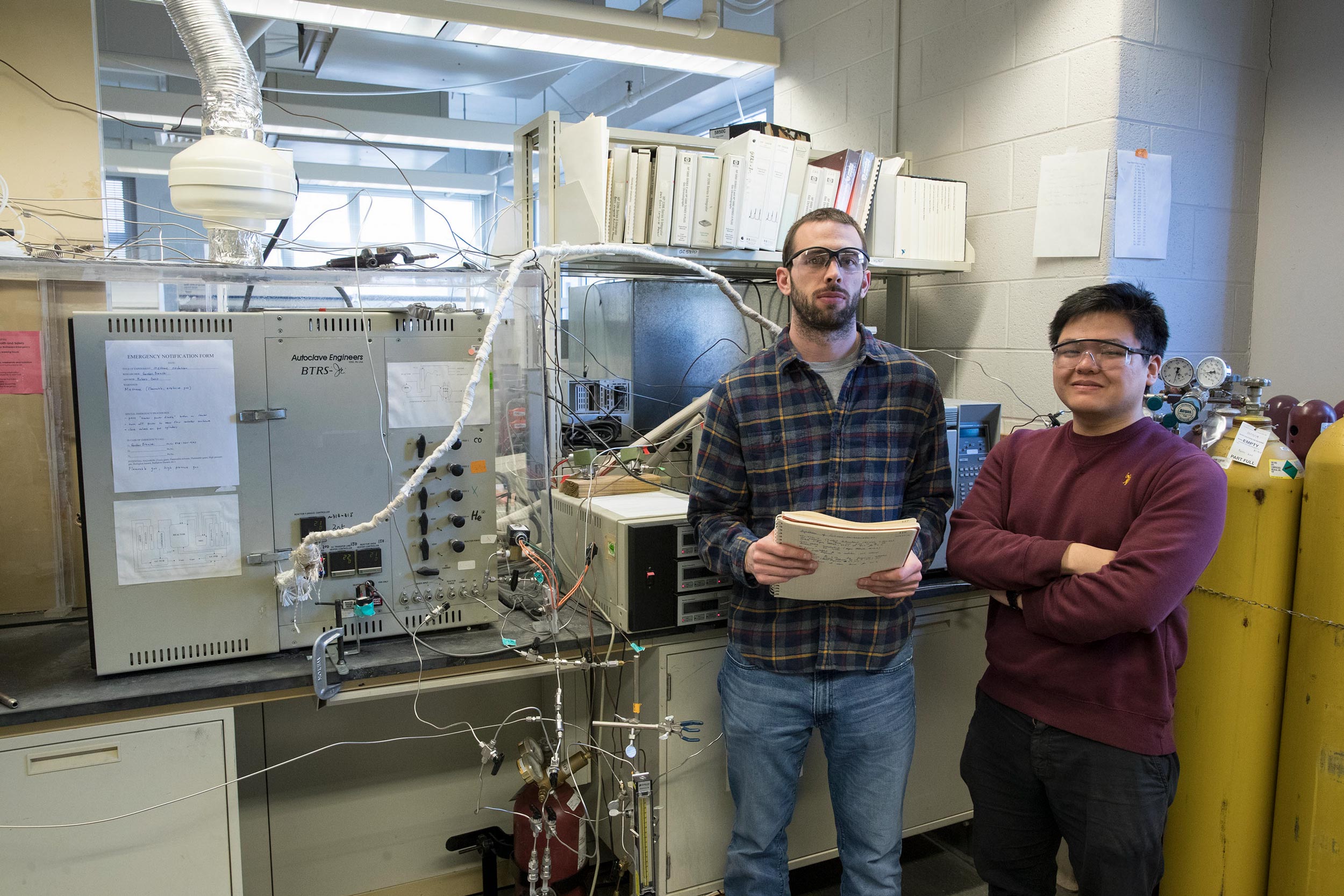 Two University of Virginia student researchers are seeking a better way to convert methane, the main component of natural gas and a byproduct of oil drilling, into methanol, a liquid that can be used directly as a fuel or as an alternative to petroleum as a feedstock for the chemical and fuel industries.

Methane is an abundant, low-cost natural resource. For most industrial applications, it must be converted to syngas, a mixture of carbon monoxide and hydrogen, which can then be used to manufacture products such as ammonia, gasoline and methanol.

“However, the syngas process is extremely energy-intensive, resulting in high carbon dioxide emissions,” Gordon Brezicki, a fifth-year graduate chemical engineering student, said. “Furthermore, due to the high pressures and temperatures required for conversion of methane to syngas, it is not cost-effective to extract methane from all but the largest natural gas deposits. Because of the low value and energy density of methane, much of the methane released during oil drilling is flared [burned off], rather than being captured, releasing huge amounts of carbon dioxide into the atmosphere and wasting a potentially useful natural resource.” 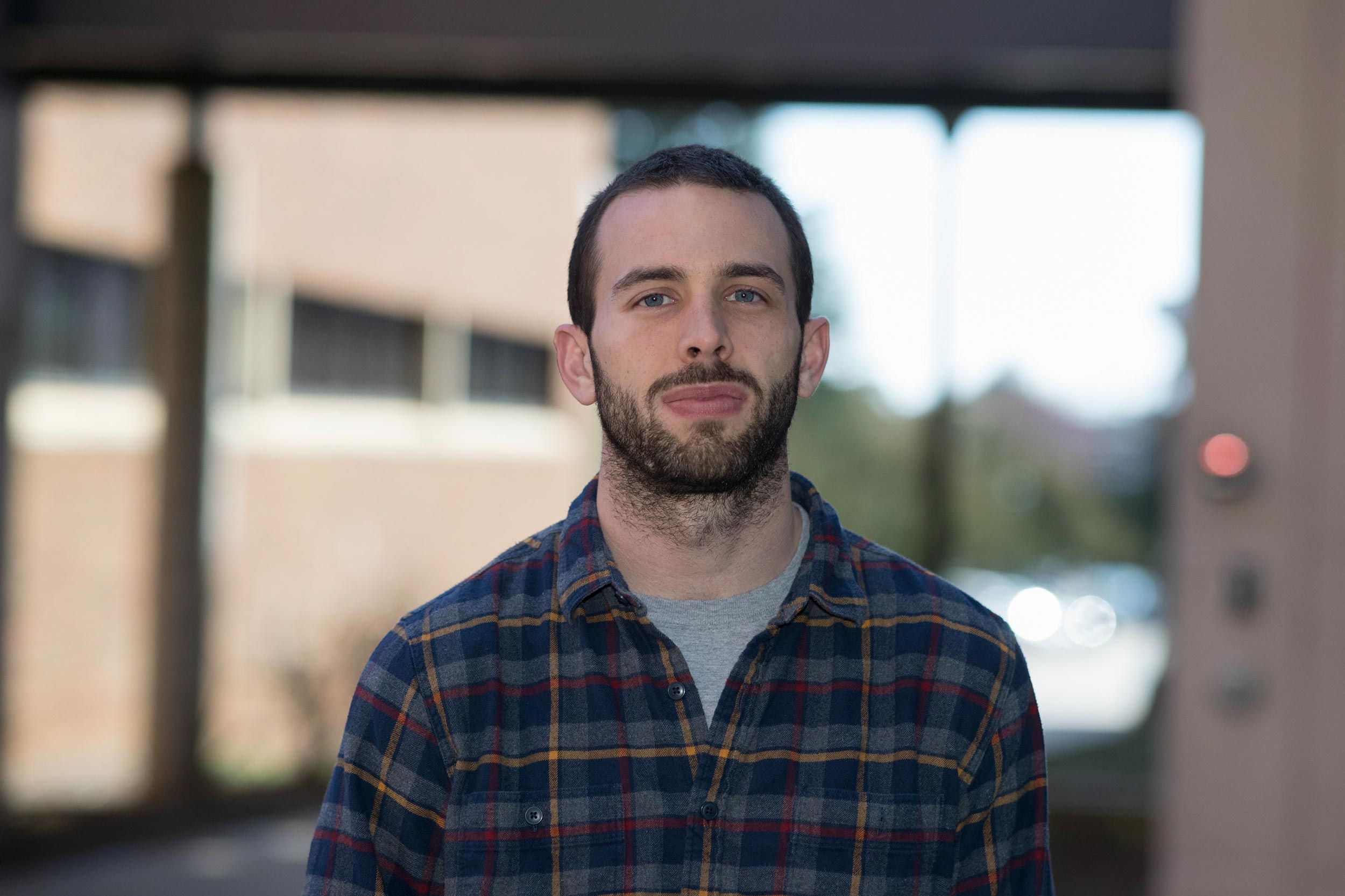 Brezicki, of Hickory, North Carolina, is working with Jonathan Zheng, a third-year chemical engineering major from Manassas, as part of a Double ’Hoo research grant that pairs an undergraduate student with a graduate student to work on a research project.

“The Double ’Hoo project is derived from the research Gordon Brezicki is performing as part of UVA’s collaboration with the Max Planck Society in Germany,” Robert J. Davis,

Earnest Jackson Oglesby Professor of Chemical Engineering, said. “Gordon has been focusing on copper-based catalysts that are capable of efficiently converting methane to methanol. The catalysts consist of small clusters of copper atoms located inside the pores of a solid microporous support material.”

Methane is a growing resource in the U.S. because of hydraulic fracturing technology, so a simple, energy-efficient process to convert methane to methanol is highly desirable.

“The copper-based catalyst being studied by Gordon is a good starting point for basic research, but is very far from being ready for commercialization,” Davis said. “Jonathan is working together with Gordon to explore other metals inside the zeolite micropores as potential catalysts. In essence, Gordon is doing a deep dive into how the copper catalyst functions at the molecular level with the hope of improving its performance, while Jonathan is undertaking the high-risk exploration of potential alternative catalysts to copper.”

Their research involves a lot of time in the lab and different problems to solve.

“We’ve screened our most promising candidate catalysts and found one that converts methane to not only methanol, but also another chemical we haven’t yet identified, which may be promising if the unknown compound is valuable,” Zheng said. “The screening process took longer than expected, as each reaction takes at least eight hours.” 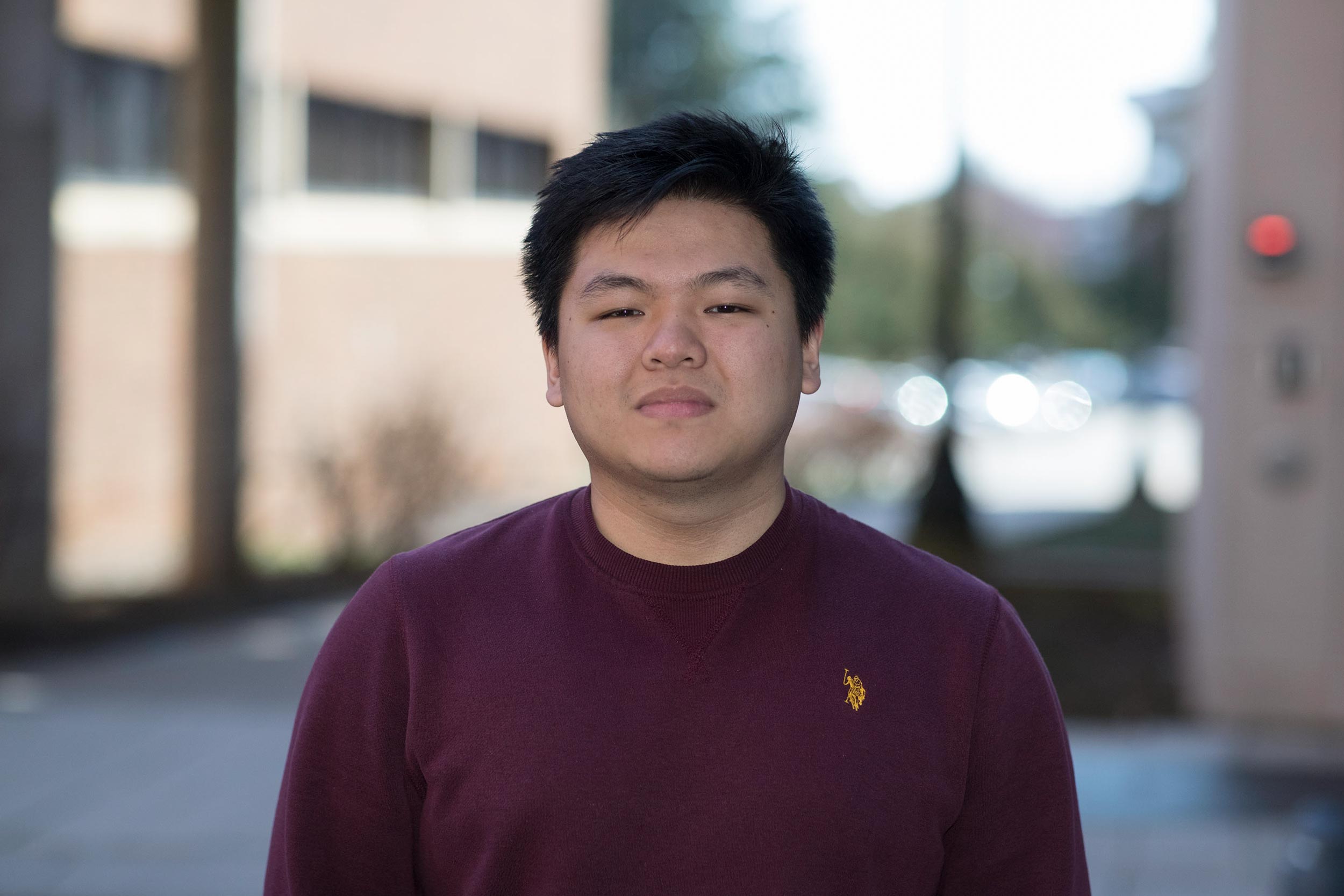 Finding an inexpensive catalyst could prevent methane from being wasted. It is estimated that about 190 billion cubic yards of methane are flared each year, representing about $20 billion in potential fuel and chemicals.

“In oil wells, there’s a lot of natural gas stored near the oil,” Zheng said. “Ideally, energy companies would capture the natural gas, but it’s often not cost-effective to store and transport. Since the gas is pressurized, they have to let it escape from the well into the atmosphere. Flaring is the process of controlling this release of natural gas and burning it, which mitigates some of the environmental impact, but still releases vast amounts of carbon dioxide into the atmosphere.”

Methane is also flared in emergency situations, such as when wells are over-pressurized in start-ups and shutdowns, and during maintenance situations where the gas cannot be otherwise captured.

“Natural gas is often burned wastefully in oil fields or left unused because the methane it is comprised of is difficult to transport or use,” Zheng said. “The work we’re doing has potential benefit to both the economy and the environment.”

“Jonathan had extensive research experience in my lab before being selected for a Double ’Hoo award, and he participates in my lab activities as if he were one of my graduate students,” Davis said. “His independence was demonstrated last fall semester when Gordon spent an extended period of time with collaborators in Berlin. Jonathan synthesized and evaluated his new materials as potential catalysts while Gordon was away. Both students are hard workers and get along well with the entire lab team.”

A Rodman Scholar, Zheng is president of the Tau Beta Pi engineering honor society, vice president of the American Institute of Chemical Engineers at UVA, a member of the Raven Society and will be a Lawn resident in the fall. Zheng plans to earn a Ph.D. before joining the workforce.

Brezicki, who received a Bachelor of Science degree in chemical engineering from North Carolina State University, is planning on a career in chemistry.

“I am hoping to join a national lab or a company with significant research activities to continue my research advancing sustainable chemical processes and energy technologies,” Brezicki said.

What’s Next for UVA’s Class of 2022? END_OF_DOCUMENT_TOKEN_TO_BE_REPLACED