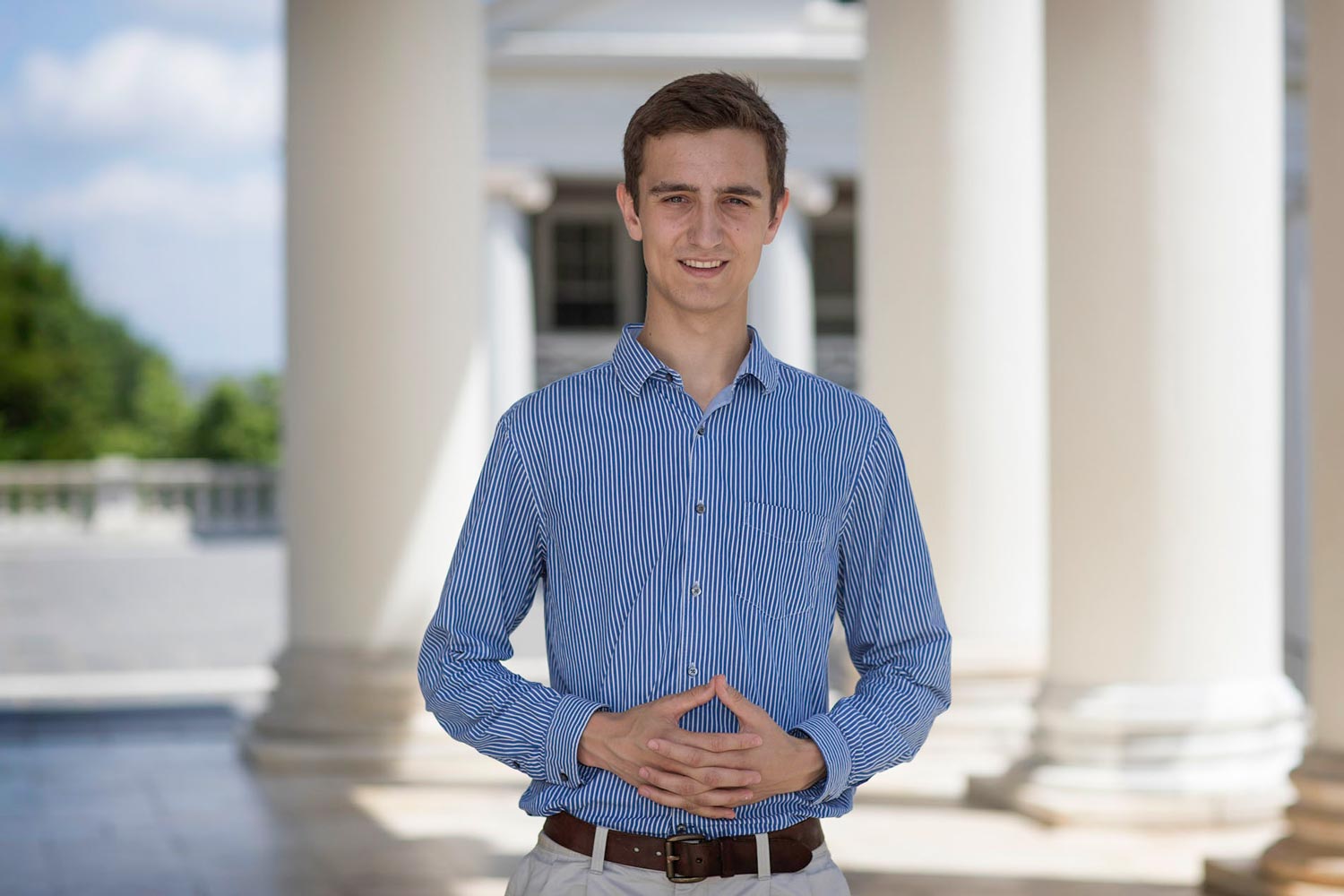 Brian Seymour’s passion for physics and mathematics paid off recently with an Astronaut Scholarship, created in 1984 by the six surviving Mercury 7 astronauts to encourage U.S. scholars in STEM fields. (Photo by Dan Addison, University Communications.)

Brian C. Seymour of Ruckersville, a rising fourth-year student at the University of Virginia double-majoring in physics and mathematics, has received an Astronaut Scholarship, which is designed to encourage students in the sciences.

Seymour’s research focus stems from his fascination with gravity.

Seymour’s mentor said the student is a fascinating researcher in a critical field in physics.

Seymour became deeply curious about gravitational physics ever since he worked at the Laser Interferometer Gravitational-Wave Observatory in Livingston, Louisiana.

“All the other forces have been unified into a single theory, while gravity cannot be combined in the same theory,” Seymour said. “The birth of gravitational wave astronomy is especially interesting because it will hopefully answer important questions about astrophysical events or questions about the early universe, such as inflation.”

“Research experiences and accomplishments play a big part in our evaluation of candidates for the scholarship,” Thornton said. “Brian Seymour has an impressive record of undergraduate research projects at the Laser Interferometer Gravitational-Wave Observatory and well as research here at UVA with his adviser, professor Kent Yagi.”

Seymour said the scholarship puts him among those also thinking big questions. “I am intrigued with all these questions and want to be a part of the community searching for answers to them,” he said.

Yagi is impressed by Seymour’s sense of humor.

“He jogs and swims almost every day,” Yagi said of Seymour. “He once told me that he does these daily exercises because he’d like to live as long as possible to see how things change over the time. He said his current goal is to live until at least 90. By the time he gets 90, medical technology should have improved and he may be able to live until 150. By the time he gets to 150, technology will improve further and he may live until 200, and this may repeat so that he can live probably forever.”

Seymour is a member of the Society of Physics Students, the Sigma Pi Sigma Physics Honor Society and College Science Scholars. He has received the Shire Award for Collegiate Education Scholarship and two fellowships for this summer – Mitchell Summer Scholarship and College Science Scholar Summer Research Stipend. A home-schooled student before arriving at UVA, Seymour plans to pursue a Ph.D. in physics.

“I want to become a professor and both conduct research in physics and expose younger students to the beauty of physics,” he said.

The Astronaut Scholarship Foundation was created in 1984 by the six surviving Mercury 7 astronauts (Gus Grissom was killed in the Apollo 1 fire) to encourage the best scholars in STEM fields in the United States. The foundation awards merit-based scholarships to students at 36 partner universities; UVA became a university partner in 2012.

Each year, faculty members nominate their top students for the scholarship, and a faculty committee selects two top candidates, who are then referred to the Astronaut Scholarship Foundation. Selection committees consisting of board members, astronauts, former scholars and others review candidates and select the top one at each university to receive the scholarship.

When Less Is More: How Harnessing the Power of Subtraction Can Add to Life END_OF_DOCUMENT_TOKEN_TO_BE_REPLACED