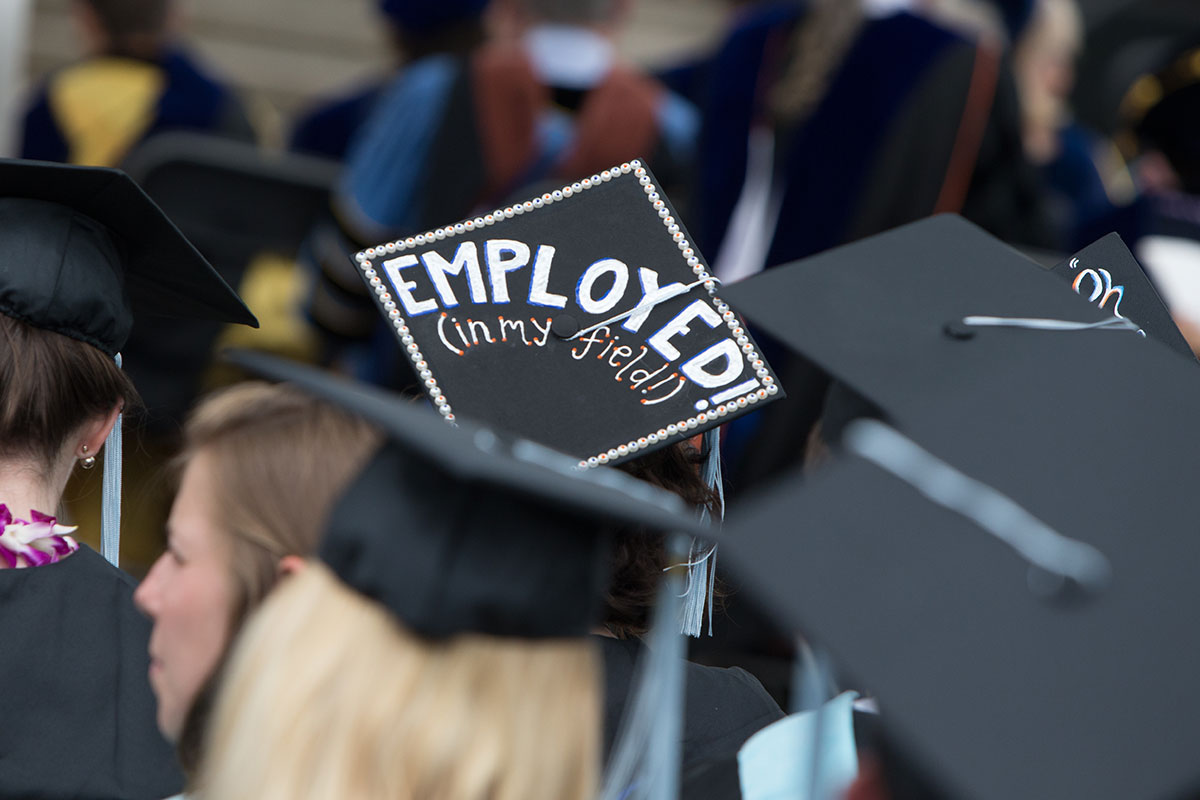 How does the job market treat University of Virginia graduates after they’ve walked the Lawn and picked up their diplomas?

Eight months out, it looks like the market is treating the Class of 2015 pretty well. The most recent UVA graduates are enjoying some of the most impressive employment statistics since the recession, and the success is shared across schools and majors.

In the McIntire School of Commerce, approximately 93 percent of those who earned a bachelor’s degree in May had accepted full-time employment within three months of graduation, with an average base salary of $69,184. An additional 5 percent were either attending graduate school or not entering the job market.

Of students who responded to a fall survey, 57.8 percent of graduates who earned a bachelor’s degree from the School of Architecture reported full-time employment. An additional 12.5 percent indicated that they were attending graduate school.

Nearly 8 in 10 College of Arts & Sciences graduates who were seeking full-time engagement after graduation reported full-time employment or pursuit of additional studies.

“UVA students are client-ready or customer-ready. They work so hard, are involved in so many things here and are anxious to go in and make a difference. They are ready to hit the ground running.” — Everette Fortner, associate vice president of career and professional development

In the federal sector, the Frank Batten School of Leadership and Public Policy led the nation’s public policy schools in the number of graduates entering the Presidential Management Fellows program, the federal government’s flagship leadership development program. There were seven finalists for the program from UVA’s Class of 2015. Batten graduates also fared well in the job market. As of October, a preliminary survey showed that 73.7 percent of the undergraduate Class of 2015 were employed full-time, with an additional 7.9 percent in graduate school.

UVA’s graduate and pre-professional schools also did well in the job market.

The School of Law had a banner year. It ranked No. 3 on Bloomberg’s list of “The 10 Law Schools Most Likely to Make You a Lawyer,” with a 96.6 percent legal job placement rate that far exceeds the 60 percent average reported by the American Bar Association.

The School of Nursing reported a 99 percent employment rate as of this month. The Darden School of Business was similarly successful, with 95 percent of the Class of 2015 accepting offers within three months of graduation. Both schools projected those preliminary numbers to increase.

The number of companies traveling to Grounds to recruit undergraduate students from all schools increased by 24 percent during the 2014-15 academic year, accompanied by a 16 percent increase in the total number of on-Grounds interviews. Employer career fair participation increased by roughly 28 percent for both the fall 2014 and spring 2015 Job and Internship Fairs, according to Everette Fortner, UVA's associate vice president of career and professional development.

Students also benefitted from new initiatives launched by the reinvigorated UVA Career Center. These include industry-specific “Career Communities” that connect current students to career advisers, alumni and employers working in key job markets; and a Virginia Alumni Mentoring program that pairs UVA alumni with students interested in their field of work.

The University also launched a new UVA Internship Center over the summer. The center supports students in their internship search and works with students and employers to ensure high-quality internships in a job market where such experiences are increasingly influencing full-time hires.

According to Fortner, UVA’s tradition of student self-governance makes students particularly marketable for both internships and full-time positions.

“UVA students are client-ready or customer-ready. They work so hard, are involved in so many things here and are anxious to go in and make a difference,” he said. “They are ready to hit the ground running.”

A Year We Will Never Forget: 2019-20 in Review END_OF_DOCUMENT_TOKEN_TO_BE_REPLACED

‘What Will You Carry With You?’ Remarks From UVA President Jim Ryan END_OF_DOCUMENT_TOKEN_TO_BE_REPLACED