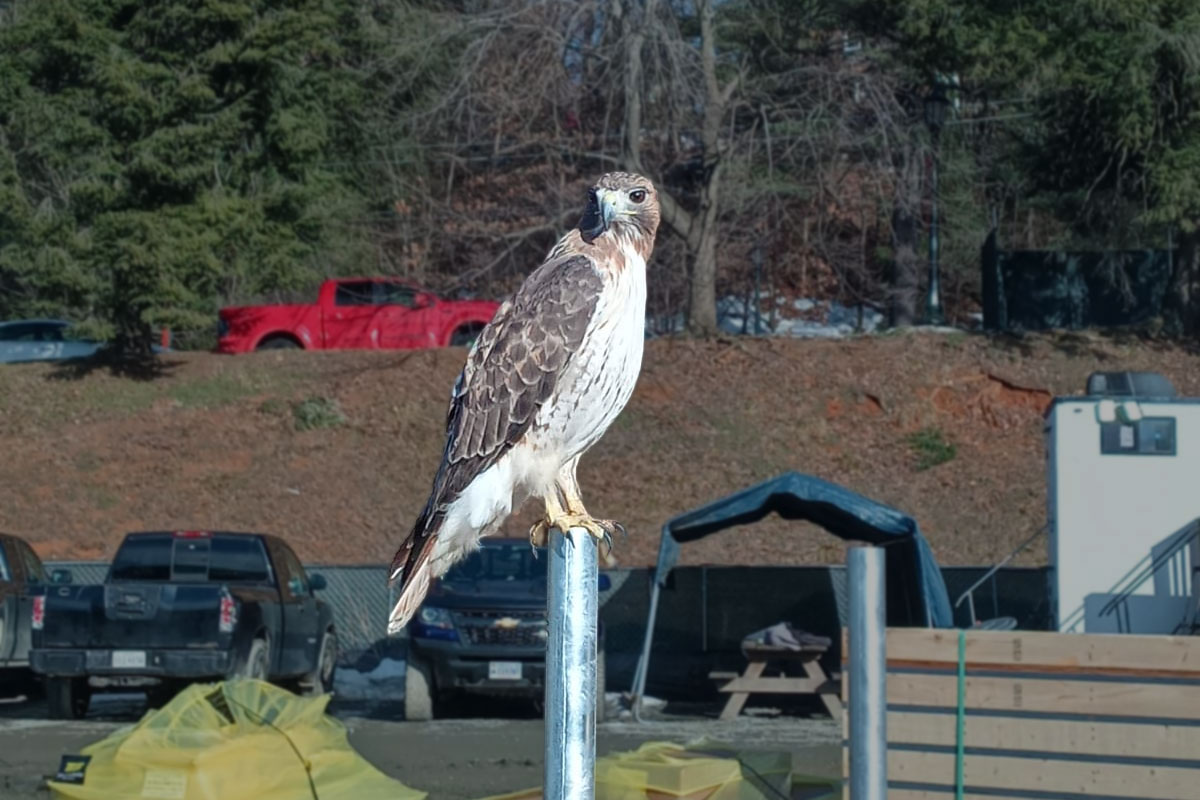 A pair of hawks – possibly a parent and offspring – have been so ubiquitous and so unfazed by workers at the University of Virginia’s main library construction and renovation site that they have become the project’s mascot.

Workers on the site have seen an adult red-tailed hawk, the most widespread hawk species in North America, and younger hawk perched on railings, equipment and posts in the construction area.

The birds’ willingness to stay put when workers range nearby is “quite extraordinary,” said David Carr, a research professor in UVA’s Department of Environmental Sciences.

The hawks have been such frequent visitors to the construction site that an image of one was included on the design of a T-shirt given out at the topping-out ceremony in May that marked the installation of the highest beams in the project.

“We noticed the hawk around the same time we put up the crane,” said Shane Wood, project manager for Skanska USA Building Inc, noting the 178-foot crane was erected in August 2020. “It likes to hang out. There is no nest that we know of, and we’re not sure about prior history.” 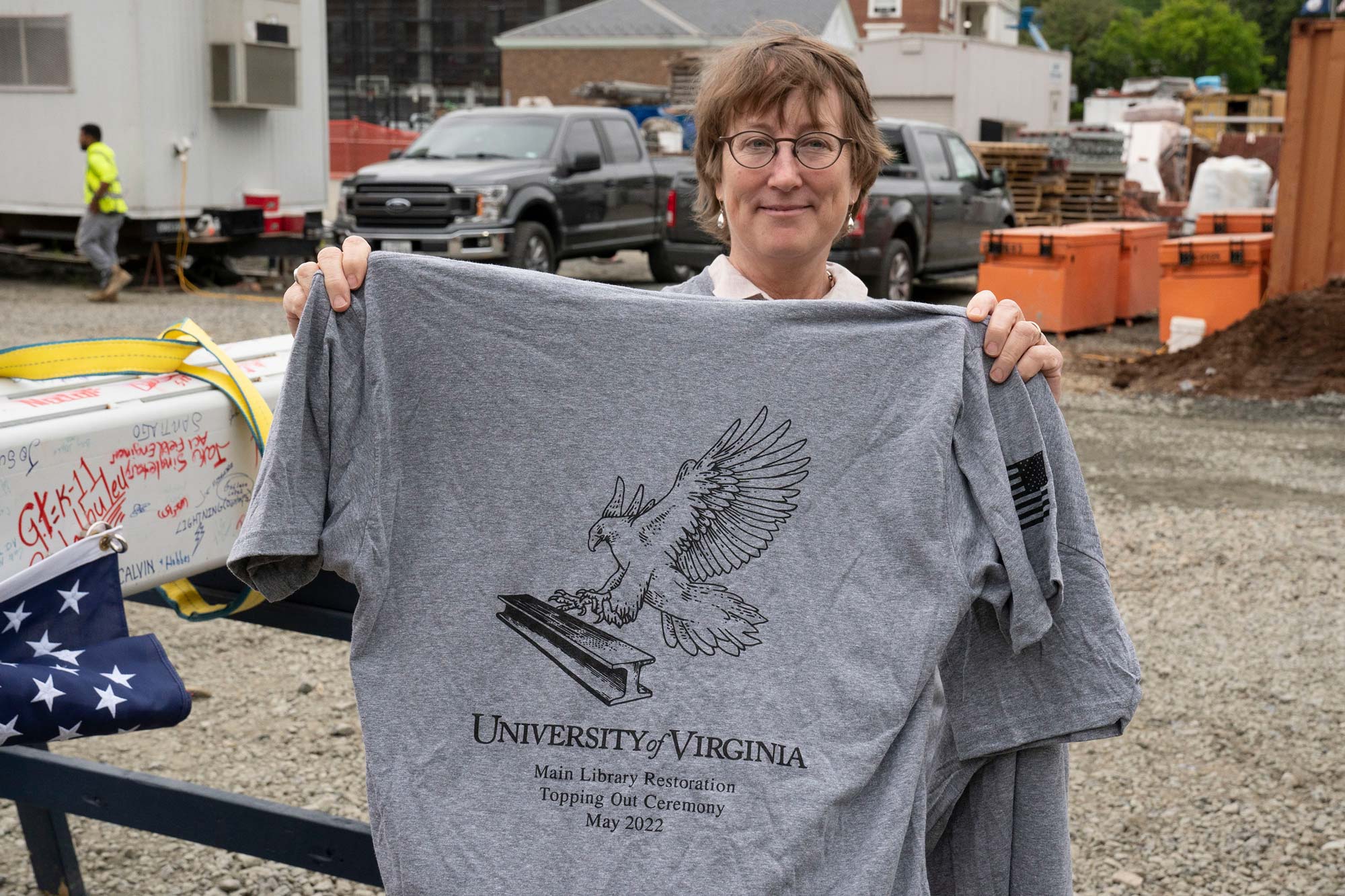 Kit Meyer, a senior project manager for Facilities Management, shows off a T-shirt with the hawk emblazoned on it. (Photo by Dan Addison, University Communications)

Carr suggested the bird could be using the site as a hunting ground, though he said they range miles for food.

“They mainly prey on small mammals – squirrels, rats, rabbits, anything in that size category would be prime for them,” Carr said. “With all that exposed ground, I imagine there has been a lot of disturbance over there is that is made prey more obvious.”

“The gravel lay-down yard has a lot of hiding spots, but in between them the gravel pad is pretty exposed, which might make for easy hunting,” she said.

If it is a hunting area, the adult bird could be teaching the younger bird how to hunt. Examining photos of the hawks from the site, Carr said there were at least two birds, an adult hawk with a solid russet tail with a terminal black band, and a young hawk with a strongly banded tail.

“You’d never know for sure, but if I had to guess, this is a parent and young,” Carr said. “Perhaps the young bird is getting a hunting lesson. That might explain the resistance to flushing with the workers around. But frankly, I’ve just never seen a red-tail hawk hold its ground like that. Quite extraordinary.”

Carr did not think the bird was seeking leavings from the workers’ lunches.

“I doubt they will go for it,” he said. “They will do some scavenging. I’ve seen red-tailed hawks on roadkill deer carcasses and some things like that, but for the most part they are looking for live prey to grab. It is never a good idea to feed wildlife under any circumstances.”

Wood said the workers are vigilant about policing the area.

“We always try to clean up food waste for rodents in general,” Wood said. “We do not leave food out for it.”

“If that bird is nesting somewhere nearby, it will very likely bring its young to that spot if the motivation is that it is a particularly good hunting spot,” Carr said. “It is very likely that they will bring their young fledglings out there to teach them to hunt.”

Several people have speculated that the bird had a nest on the library building or in one of the trees that was taken down to accommodate the construction. Carr said hawks like large, tall trees and have been noted at times to nest on buildings. Jon Little, a wild bird expert, said red-tailed hawks will re-nest nearby the original if their nest is destroyed or predated.

“With all the big trees on Grounds, it is not impossible to think that the bird is breeding somewhere nearby,” Carr said. “And they do breed in the area. Years ago, there was a red-tailed hawk nest right outside of Clark Hall, and that is one case where they bred on Grounds.”

“Nobody at the library that I have spoken to recalls the hawk hanging out at the library prior to the renovation,” said Brenda Loewen, senior project manager with Facilities Management Planning & Construction, “though that could just be because it was up high. The hawk makes regular appearances in my construction update presentations to the library and the staff is totally enamored with our haughty winged friend.”

When library personnel tour the construction site, they’re often more interested in the birds than the building.

“We would show them this incredibly expensive, complex and transformative project and all they would remember is the hawk,” Meyer joked. “They are the ones who informally made the hawk our mascot.”

While the raptor is a mascot, there is no way of knowing if it is a male or female.

“Female hawks average a little larger than males, but plumage-wise they are indistinguishable and without having them side-by-side it would be almost impossible to tell male or female,” Carr said.

It is also difficult to determine the bird’s age.

“The oldest recorded lifespan of a red-tailed hawk in the wild is 25 years,” Carr said. “If they survive the first year, where mortality is over 50%, they average a six- to seven-year lifespan, with human-caused mortality being the most significant source. They start breeding at the age of 2 or 3.”

And while these birds seem content being on or near Grounds, red-tailed hawks can be migratory.

Carr said he found the remains of a banded red-tail hawk in West Virginia and when he traced it back, he found the bird had hatched in Maryland.

The hawk is not the only wildlife around the construction site. Loewen said during the pandemic, a fox was seen trotting across the green and along the walkways in front of the Albert and Shirley Small Special Collections Library and Clemons Library, which are next to Alderman.

“At that time, we were in lockdown with no in-person classes and the fox was king of the green,” Loewen said. “I haven’t seen him since last year.”

Meyer also remembered a skunk that was found on another UVA construction  site.

“He was in a section of pipe – no one knew he was there until the pipe was picked up by a forklift,” Meyer said. “The little fellow ran out the end of the pipe, fell or jumped, landed and ran away. He came back, though. He was spotted in the same area several times after his short flight.”