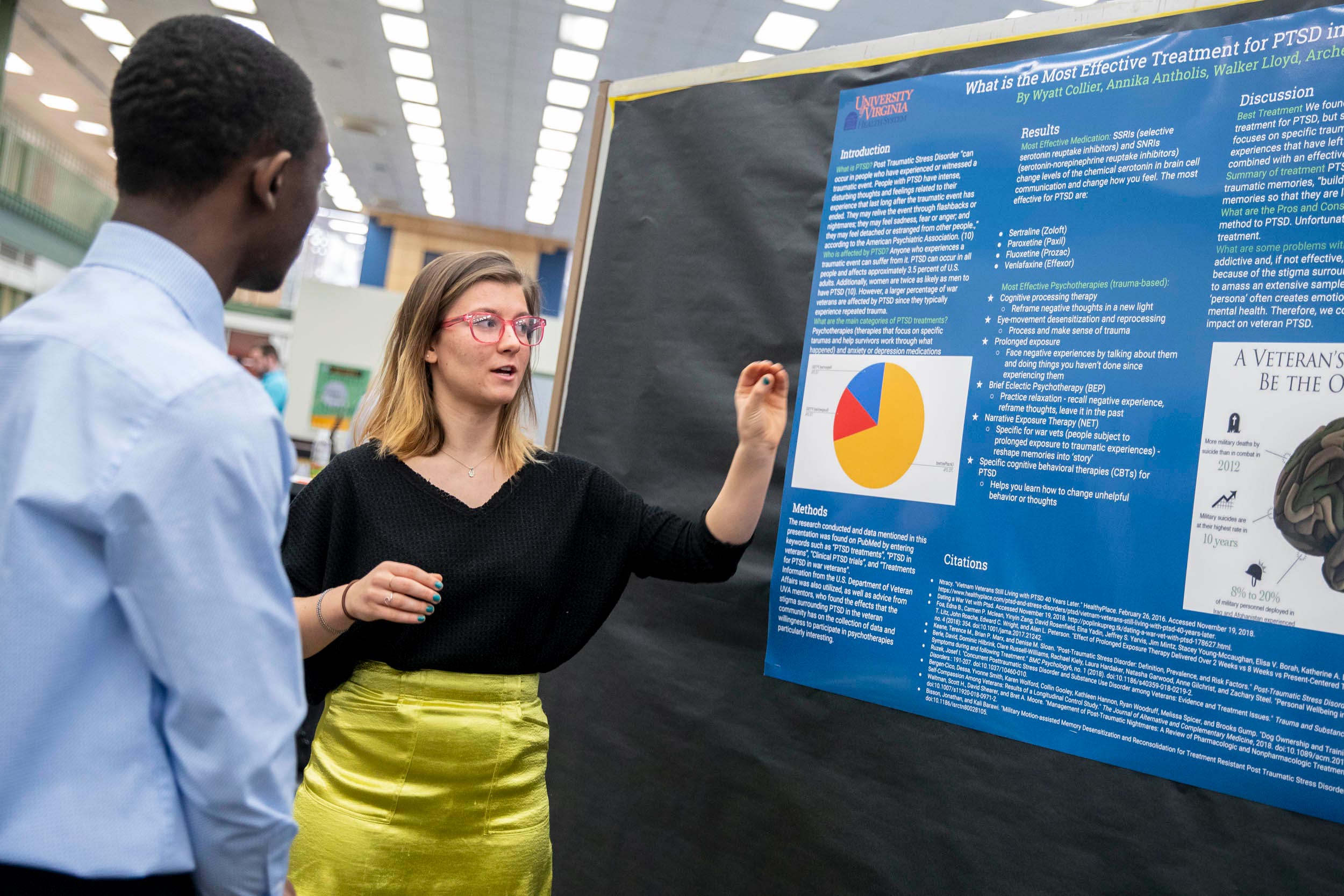 Ever since taking an Advanced Placement psychology class, Charlottesville High School senior Blaze Prax had been unable to dislodge the story of Phineas Gage from his head.

That’s appropriate, since Gage was an American railroad construction foreman known for surviving an accident in which a large iron rod was driven completely through his head, destroying much of his brain’s left frontal lobe. Gage lived 12 years after the accident, but friends said his personality changed.

In the fall, when Prax’s biology class research group was searching for a topic for the annual Future Leaders in Healthcare Research Poster Symposium, he remembered Gage.

The case was something he had always wanted to take a deeper dive into. With the help of UVA Health System mentors, Prax spent the better part of three months doing it.

On Friday, Prax’s team presented posters at the fifth annual symposium detailing its research of how the damage to the prefrontal lobe affects aggression. Put on by UVA’s Office for Diversity at the School of Medicine, the event resulted from pairing 17 teams with post-doctoral students who showed them how to use the database PubMed.

“We researched the relationship between a traumatic brain injury and physical aggression, and what we figured out was that 38 percent of adults who have a traumatic brain injury showed increased aggression,” Prax said. “One of the very interesting things I learned was that each section of the brain controls a different function, so no one brain injury is the same as another – because if it’s off by even just a quarter of a centimeter, it could completely change the effects that somebody experiences.”

CHS junior Edie Calvert was part of another team that examined the treatment of ADHD in children. She said her Health System mentors were invaluable.

“It was a little intimidating at first, because they’re older and they know a lot more and I had no experience with the database – so I was really nervous,” she said. “But they were all really helpful and really nice, and it was great to get a different perspective.” 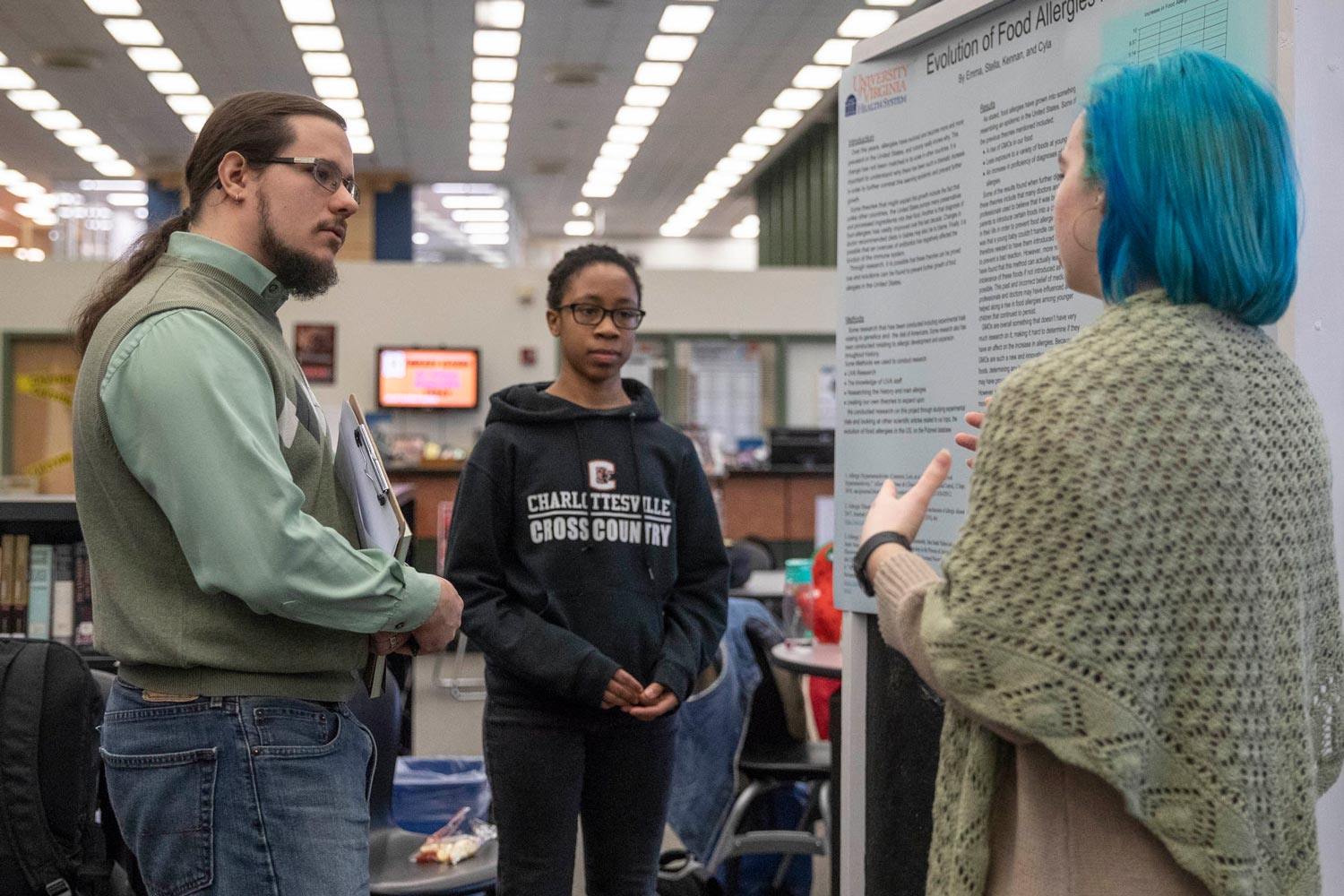 The feeling was mutual, according to post-doc mentor Austin Keeler.

“It’s really nice to be able to connect out to the community,” he said. “That’s one of the things I really like. We interact with the students three different times – before they’ve started the project, while they’re in the midst of working on it, and then here at the end – and we get to see all their individual journeys and how they go from not knowing how to look at the research to figuring it out and putting together these really nice presentations.”

Post-docs and medical students served as judges at the symposium.

“I’ve been very impressed,” judge Isola Brown said. “They look like graduate and post-doc posters that I’ve seen – some are maybe even better. I was very impressed by their work and presentation skills.

“The students showed they understood the science behind what they were researching. They don’t just have the ‘I Googled it’ or Wikipedia-page knowledge. The topics they researched they actually did a proper scientific search and were able to find references to support their data. I think that’s really important and setting a good basis for the future.”

“When we were younger, we were able to bring a lot more food to school,” Strait said. “Now there are signs for a ‘peanut-free zone’ and ‘designated snack areas.’”

“Slowly they’ve been banning food from the classroom,” Russell added. “It’s been interesting to see that progression. Our big takeaway was how diet in our infants and children can affect the development of food allergies in the future.”

Another team started out with the general idea of researching post-traumatic stress disorder, before their mentors encouraged them to narrow their scope. Eventually, they landed on “The History and Long-Term Effects of PTSD Resultant of Child Abuse in the Catholic Church.”

Senior Aesop St. Ours’ eyes lit up when he talked about the chance to spend time at the Health System.

“I got access to articles I never would have had access to,” he said. “That was incredibly helpful. They’re well-written, and it was interesting information. I got smarter every dang sentence I read. The mentors were incredibly helpful in helping us find the articles and dissecting them.

“It was really cool. I wish we could do this with other classes.” 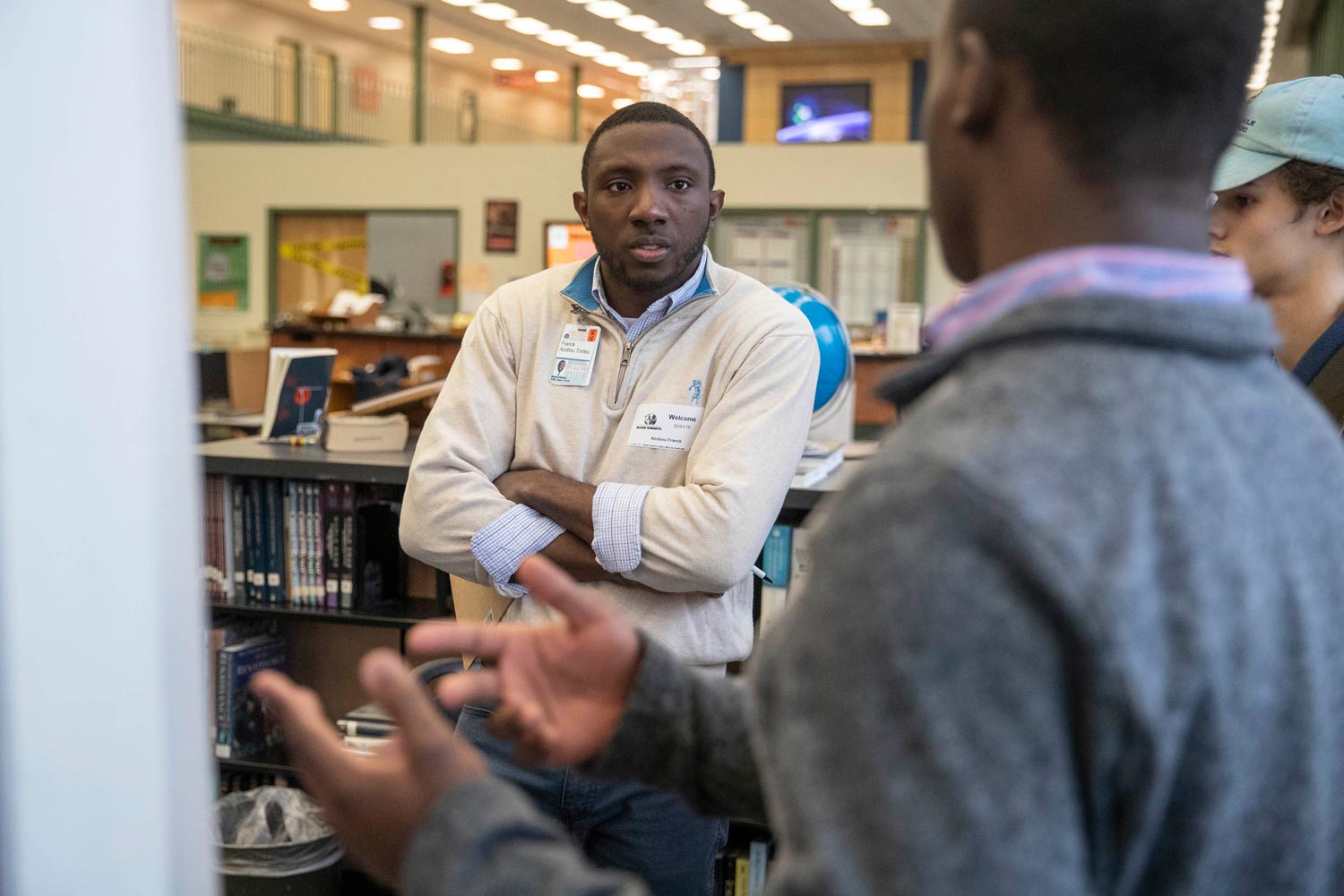 Watching students have “eureka moments” is what Keeler loves most.

“We had science fairs when I was in high school, but this is very different sort of thing,” Keeler said. “This is just a really nice thing that the community and the University can do together. It’s just wonderful to see these kinds of outreaches actually work.

“It’s great to see high school students that can get really excited about these different areas. They came up with these topics, and to see them get so passionate about a scientific or research-based thing is really rewarding.”

In many cases, the students and researchers stay in touch.

“It’s a connection that will last awhile,” said Leah Beard, assistant director of diversity programs in UVA’s School of Medicine, “because these are Charlottesville students and researchers who live in Charlottesville. They have that face-to-face contact.”

A Year We Will Never Forget: 2019-20 in Review END_OF_DOCUMENT_TOKEN_TO_BE_REPLACED

‘What Will You Carry With You?’ Remarks From UVA President Jim Ryan END_OF_DOCUMENT_TOKEN_TO_BE_REPLACED