Heart of the Matter: Cardiologist Honored for Tool that Detects Infections in Infants 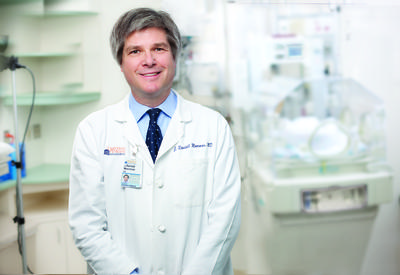 U.Va. Innovation has named Dr. J. Randall Moorman the 2014 Edlich-Henderson Innovator of the Year in recognition of his body of research and, specifically, for the development of a predictive monitoring tool for early diagnosis of potentially fatal illnesses in infants.

“I am very honored to be on this list alongside the past awardees, all U.Va. giants. It’s just me getting the award, but the stage wouldn’t be big enough to hold all the people who worked with me,” said Moorman, a cardiologist and professor of medicine, biomedical engineering and molecular physiology and biological physics.

Collaboration, in fact, is at the heart of many of the discoveries made by Moorman and his colleagues. “I believe it’s the engine of discovery,” he said.

“Randall Moorman’s innovative monitoring technology in neonatal intensive care units has significantly improved the lives of many low-birth-weight infants,” said W. Mark Crowell, executive director of U.Va. Innovation and associate vice president for research. “His research has and will have a major impact on the way we look at bedside monitoring for early detection of potentially life-threatening conditions.”

Moorman will be honored Wednesday at The Jefferson Theater in downtown Charlottesville at U.Va. Innovation’s annual Innovator of the Year award gala.

Moorman was fundamental in the launching of two companies spun out of the University and has been able to successfully guide his clinical and research career through the commercialization pipeline. The research at the center of his first and commercially successful venture, Medical Predictive Systems Corporation, founded in 1999, has resulted in the development of the Heart Rate Observation System, or HeRO, a tool that helps determine impending catastrophic illnesses through the analysis of heart rate characteristics. Moorman and colleagues focused this monitoring technology primarily on premature infants in intensive care units – patients who weigh less than three pounds and who are more vulnerable to develop sepsis, a life-threatening bacterial infection of the bloodstreams.

“The problem with sepsis in that particular population is that there is really no good way to tell that an infant is sick by looking at them,” Moorman said. “We figured that any early detection ought to be very useful because sepsis is, after all, an infection and antibiotics are effective on most infections.”

Moorman looked at how the infants’ heart rate behaved and found that it displayed a very distinctive abnormality in septic infants between 12 and 24 hours before illness could be detected.

“Fetuses, when they are distressed, develop a characteristic abnormality of the way their heart rate behaves,” he said. “We found exactly the same abnormalities in septic premature infants. They react to distress the same way.”

After the discovery, the team worked for several years to perfect the detection of abnormality and began the largest randomized clinical trial ever undertaken in very low-birth-weight infants involving nine U.S. hospitals on the East Coast and middle of the U.S., 100 doctors, more than 1,000 nurses and 3,000 very low-birth-weight babies. The results were that when monitoring was used, the mortality rate decreased by 22 percent.

Moorman credits the success of this technology to the connection and collaboration of clinical medicine with quantitative mathematics – two camps looking at data and coming together to discuss results. “We have been fortunate to have found a way to work together that advances all of our causes,” he said.

Douglas E. Lake, associate professor of cardiovascular medicine and Moorman’s closest collaborator, agreed. “Mathematicians and cardiologists sometimes speak different languages, but Randall and I have enjoyed an extremely productive and rewarding collaboration for nearly 15 years. This collaboration has brought advanced mathematical thinking to the bedside of premature infants with the HeRO heart rate monitoring system and innovative new algorithms for detecting atrial fibrillation and predicting adverse events, like sepsis, in adults,” he said. “There is a lot of talk these days about using big data to improve health care, and Randall is a pioneer and recognized leader in not only making this a reality at U.Va., but in an increasing number of hospitals worldwide.”

Over the course of 15 years, Moorman has been named on six U.S. patents, one issued Canadian and one European patent, with several other applications pending. Moorman is vice president of the Society for Complex Acute Illness and the editor-in-chief of Physiological Measurement, a leading international journal in the field.

The success of this monitoring technology and its results has prompted Moorman to launch another company, AMP3D, focused on developing tools for use in adult hospitals and ICU settings.

“We are working very vigorously toward developing predictive monitoring for patients in our hospital beds to detect those at most risk of deterioration,” he said.

According to Moorman, an entrepreneurial spirit and the dissemination of knowledge via intellectual property are vital elements in advancing science and medicine.

However, he also strongly believes in the importance of finding the right collaborators and advisers. “If we are practicing medicine or delving deeply into solving complicated clinical problems, there isn’t enough time left over to get as good at business as you absolutely have to be,” he said.

Named for U.Va. Professor Emeritus Dr. Richard F. Edlich and Christopher J. (“Goose”) Henderson, a 25-year veteran of privately owned financial services businesses, the Edlich-Henderson Innovator of the Year Award recognizes an individual or team each year whose research discovery is making a major impact. Previously the Edlich-Henderson Inventor of the Year award, the award title and criteria were modified in 2012 to be more inclusive of University innovators pursuing a variety of different paths to achieve impact for their discoveries.

Edlich died in December. At the end of Wednesday’s program, there will be a brief reflection on his passing.

Ahead of Thanksgiving, Hoos Look Back With Gratitude END_OF_DOCUMENT_TOKEN_TO_BE_REPLACED

The Cavalier Marching Band Marches On – Even When Apart END_OF_DOCUMENT_TOKEN_TO_BE_REPLACED