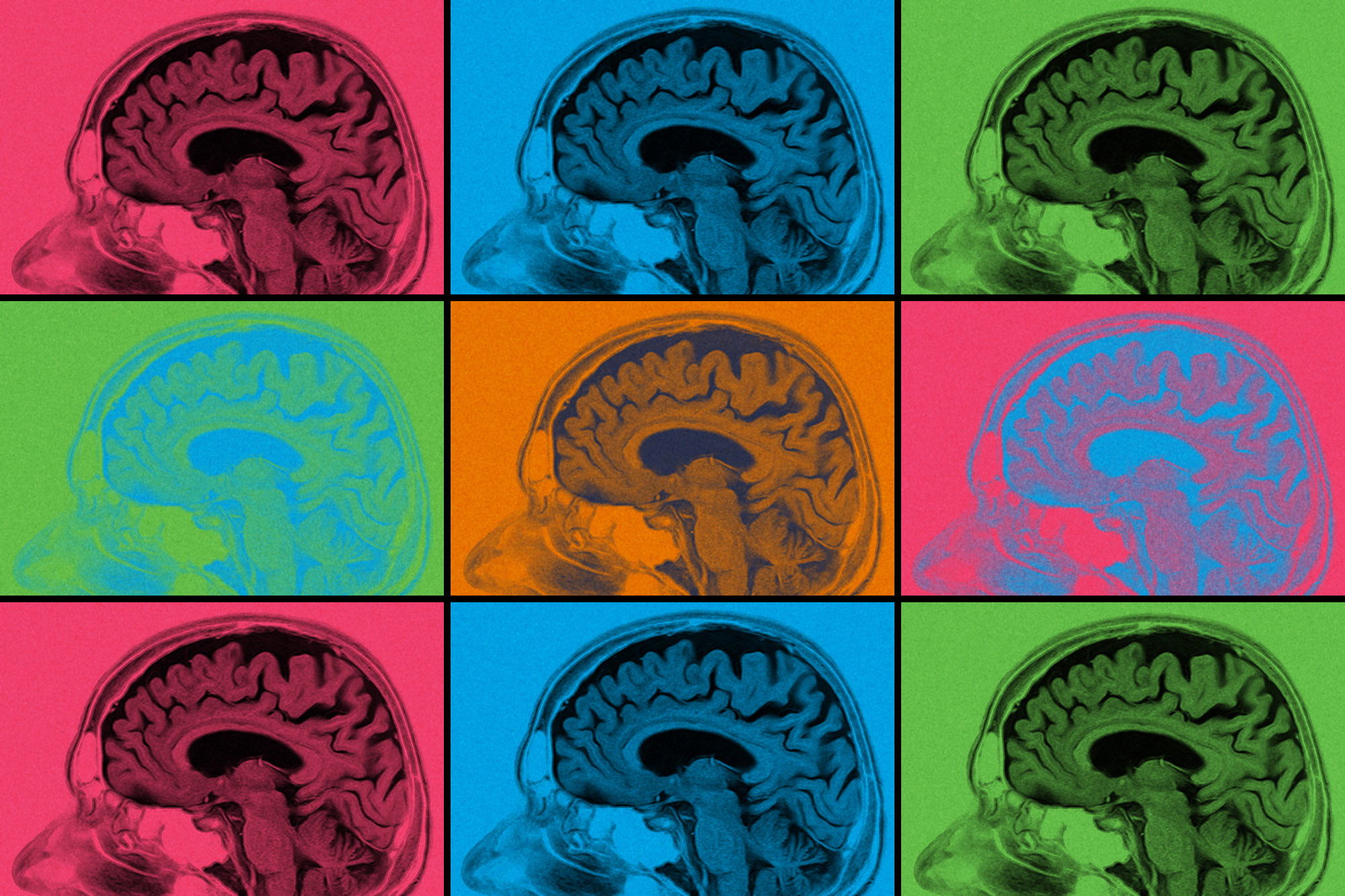 On the path to medical school, there are few choices better than an undergraduate degree in neuroscience. The major, offered by the University of Virginia’s College of Arts & Sciences, gives students an opportunity to explore courses in biology, chemistry and psychology, and it gives students the chance to contribute to original research alongside some of the world’s leading neuroscientists.

But the increasingly interdisciplinary nature of the major and its focus on research is making it a popular choice not just for future doctors, but for students in a variety of fields in which having a deeper understanding of how the brain works gives them a unique advantage.

To accommodate growing interest in the major, the College set the stage this summer to expand the program significantly with the launch of the Program in Fundamental Neuroscience, a move that puts it on a trajectory to become one of the nation’s top-ranked undergraduate programs – one that has the potential to spark unique collaborative research efforts, launch the careers of a new generation of research scientists and create leaders in fields as diverse as business, public policy and education.

From Molecules to Minds

Neuroscience is the study of the brain and the nervous system, which means that neuroscientists are interested in the biology and the biochemistry behind our thoughts and emotions and how those affect our decisions and actions. Research in neuroscience can help us understand diseases like Alzheimer’s and Parkinson’s, as well as developmental disorders like autism. It can also impact our understanding of how we learn, how we respond to addictive substances and even how we behave as consumers.

Almost 20 years ago, UVA faculty in biology and psychology saw an opportunity to create an undergraduate major that would take advantage of the breadth of neuroscience-oriented research on Grounds in biology, chemistry and the behavioral sciences, and in 2003, they led a grass-roots effort to launch one of the country’s first undergraduate neuroscience majors.

Today, the major gives students a solid foundation in cellular and molecular-level biology, chemistry and genetics, and it offers electives in neuropsychology and advanced analytics, courses that range from “molecules to minds,” according to Jianhua “JC” Cang, Paul T. Jones Jefferson Scholars Foundation Professor of Neuroscience, director of the undergraduate major in neuroscience and professor in the College’s biology and psychology departments.

The major’s requirement that students engage in hands-on research at the University creates opportunities for students to work with leading researchers in more than 80 labs focused on neuroscience research throughout the College and the School of Medicine – experience that makes students stand out in the job market and as applicants to graduate programs.

Students apply to the major at the end of their second year. Initially, the program allowed only 25 students to join each year, capping the total at 50, but as the program has grown increasingly popular and competitive, more and more highly qualified students are being turned away.

To meet student demand and keep pace with research on diseases and conditions like Alzheimer’s and autism, the neuroscience curriculum and infrastructure supporting the major have had to adapt. Originally, the major was run by the biology and psychology departments with the directorship alternating between the two, but there were no fully dedicated faculty to the major, which meant those who were teaching neuroscience courses had to take time away from their primary departmental responsibilities.

“What we needed was the opportunity to bridge the two departments,” said Sarah Kucenas, a professor of biology and director of the new Program in Fundamental Neuroscience, “to build something that doesn’t take us away from our departments, but that allows us to come together in a unique way that allows us to share this research interest.”

During the winter break last year when everyone was tired of an endless parade of Zoom meetings, Kucenas sent a message to 20 faculty members asking them to participate in a discussion about the next steps for the major.

“Everyone showed up. Everyone showed up,” Cang said. “I think that really tells you something about the desire and the excitement that we have here. That’s when I realized that this could really succeed, that it could become something much bigger than the individual parts.” 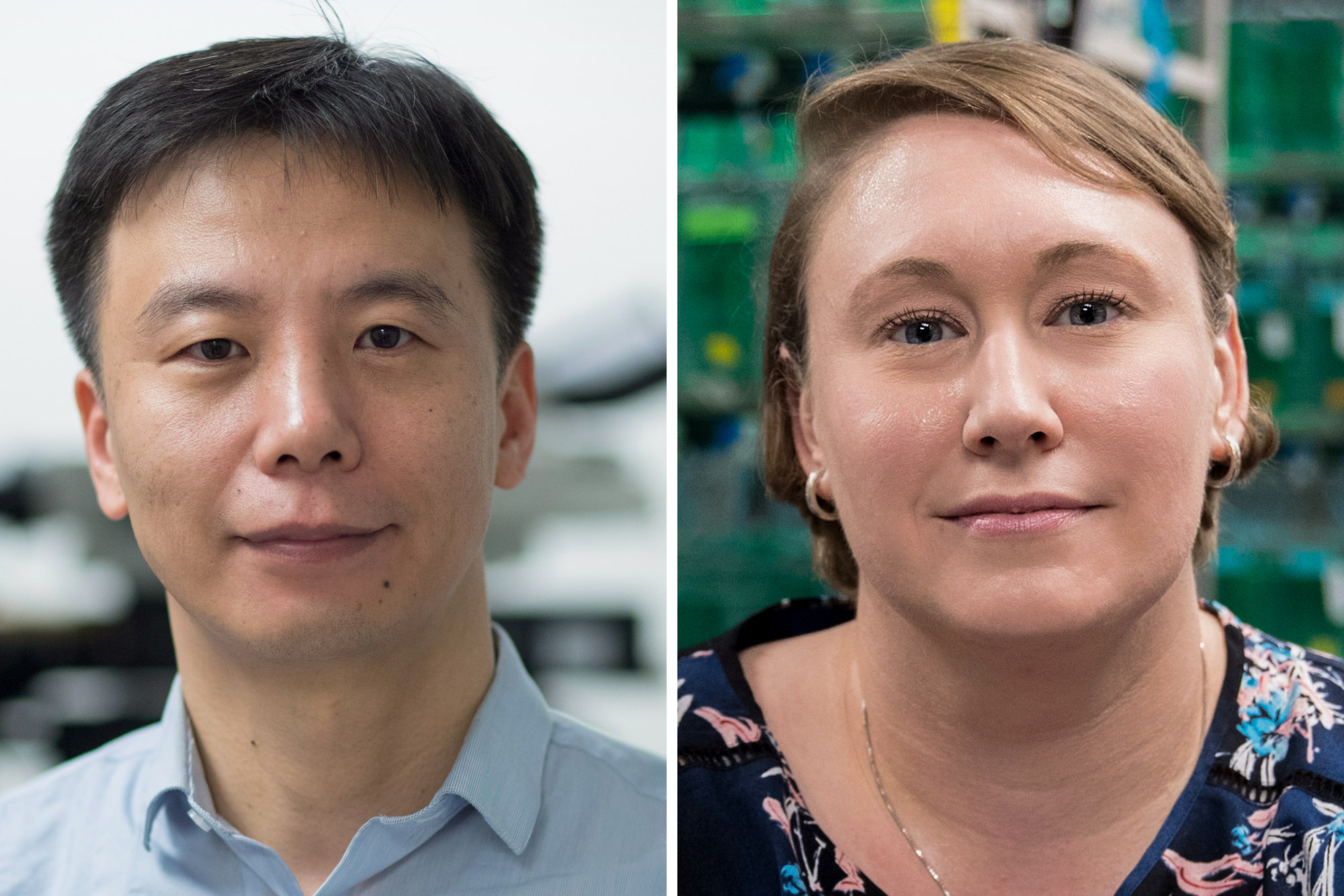 With the support of the College and its donors, the Program in Fundamental Neuroscience was launched in July under Kucenas’ leadership. The new program will have its own dedicated leadership and administrative support. It will have faculty members whose responsibilities will extend deeper into the program, to include guiding program expansion and developing a new curriculum for the major. In the summer of 2022, Fundamental Neuroscience and many of its faculty will take up residence in newly renovated space in Gilmer Hall, and over the next several years, it will address increasing the number of students admitted to the program to as many as 200.

“What we want to do with the major is really start to make connections with other departments in the College and other schools, to allow our students to take elective courses in business or law that would help them to stand out in the job market,” Kucenas said.

“We have an incredible opportunity here to build on our already compelling neuroscience program – drawing on the strengths of a wide range of disciplines and a diverse pool of faculty experts,” said Ian Baucom, Buckner W. Clay Dean of Arts & Sciences. “The students who come to UVA to study neuroscience also benefit from an exceptional liberal arts and sciences education – that is something we are uniquely positioned to offer and it helps our students stand out in the marketplace.”

According to Kucenas, the focus in most neuroscience programs is on translational research, which involves finding medical applications for scientific discoveries. It’s an important aspect of the field and one that makes the major ideal for students interested in medical careers. However, without scientific discovery, translational research isn’t possible, and that leaves the new Program in Fundamental Neuroscience in a unique position.

“We have research-active, basic science departments here in the College,” Kucenas said. “Here at UVA, in biology, psychology and chemistry, we’re scientists driven by discovery, and I think you don’t find that in many neuroscience programs, and many undergraduates in those programs don’t get to learn about research in neuroscience from a perspective of pure curiosity.

“How does a neuron know when to divide? How does a brain know how many cells to make? These are fundamental questions, but incredibly interesting,” Kucenas explained. “How do human babies develop? How does the brain go from being a really rudimentary structure to knowing how to walk or how to learn a language? There are translational implications there, but the questions are driven by the ‘why?’”

It’s those “why” and “how” questions that make the major a compelling option for students who are heading for careers in which scientific literacy and hands-on experience in scientific research are important assets.

Isabelle Witteveen graduated with a major in neuroscience and a minor in chemistry and is now pursuing a master’s in education while working with Teach for America, teaching science to low-income students who have fallen below state standards in math and reading. As an undergraduate, she explored several potential majors in the sciences before deciding on neuroscience.

“One of the best things about children is how curious they are,” Witteveen said. “If you’ve ever spent a significant amount of time with a toddler, the question you get the most is ‘Why?’ and I feel like I’ve never grown out of that curiosity.”

In addition to having the chance to do hands-on research as part of her degree, Witteveen realized that one of the aspects of her education that she enjoyed most was the opportunity to present that research to her classmates.

“I don’t think I would have discovered that, had it not been for the fact that research and presentations were so heavily involved with the neuroscience major, and now I’m standing in front of a classroom all day speaking to a group of young minds, and I get to share my love of science with them,” Witteveen said.

She also felt that the scope of a discipline that ranges from molecules to minds helped her develop the ability to look at science in a much more comprehensive way.

“To be able to think about things at both the microscopic and the macroscopic level and every step in between is a valuable skill in any career,” Witteveen said. “To think big picture, or what’s the overall goal we’re looking at, but not be able to understand the little details or the little steps it takes to get there, you’re not going to get anywhere.”

Molly Booth Reilly graduated with a major in neuroscience and a minor in bioethics. This year, she finished her Ph.D. in biology at Columbia University, and her long-term plan is to land a career in research at an organization like the National Institutes of Health. 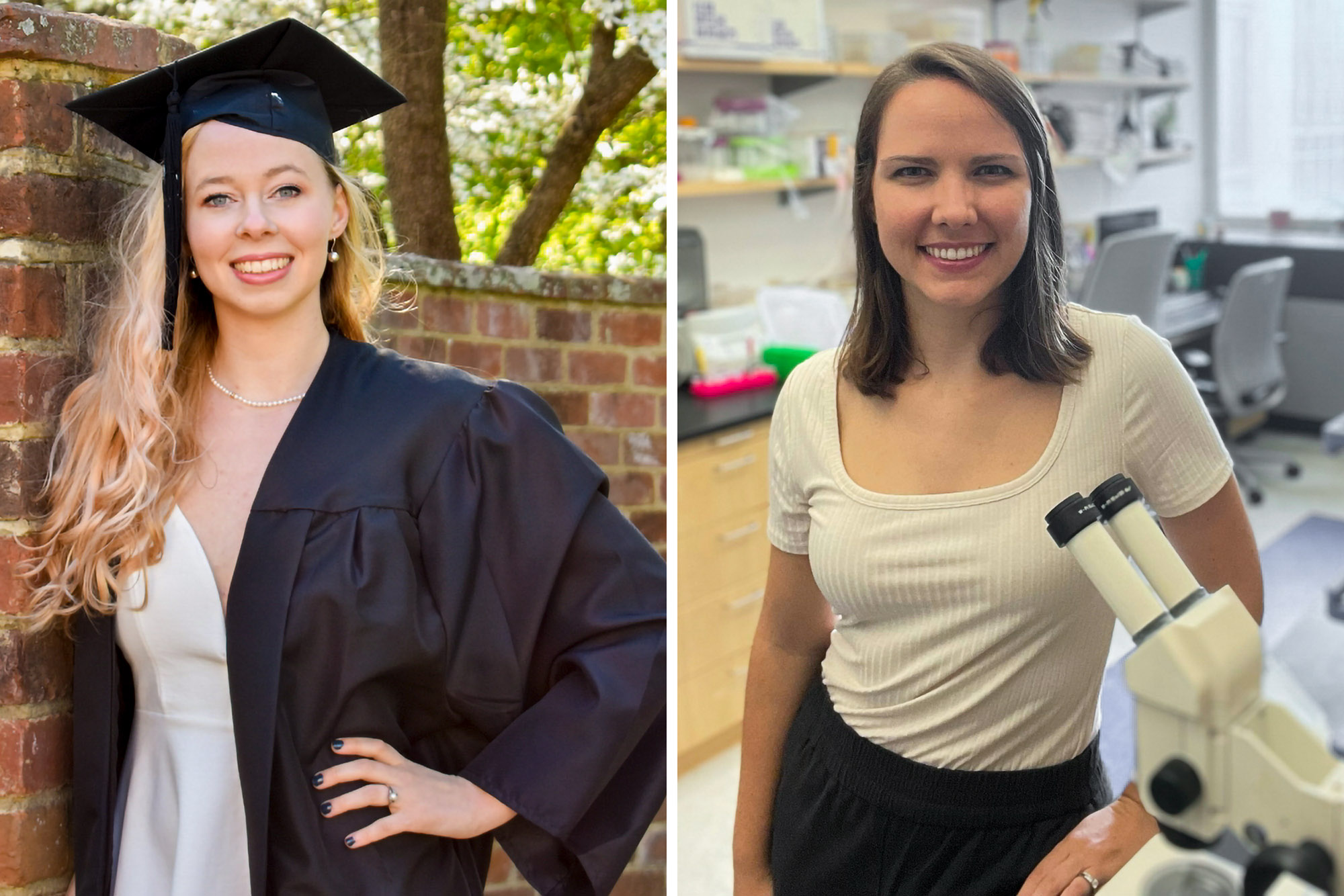 As an undergraduate, she was interested in how neurons are different from other types of cells, how they produce thoughts and their role in shaping personalities. She chose neuroscience as a major because it allowed her to explore those questions and to see if research was a career she might like.

Her experience with the program made her certain that she was on the right path, but when she got to Columbia, she realized it had given her an advantage her classmates didn’t have.

“The UVA neuroscience program was exceedingly helpful to me in graduate school,” Reilly said. “I was able to take five or six graduate-level classes with neuroscience graduate students at UVA before coming to Columbia. So compared to my classmates, I felt very prepared.”

Additionally, the introduction the program gave her to reading research papers, understanding the mechanics of applying for research grants and presenting research to an audience made the transition to graduate school much easier.

“Those are all skills I learned in the neuroscience program that I use, basically, every day,” Reilly said.

A Doorway to Diversity

In addition to opening the door to a greater number of qualified students, Kucenas believes that as the program grows, it will increase the diversity of the population of students who go on to careers and advanced degrees in STEM fields.

“We’re a public university, and by the very nature of the diversity of the undergraduate population, we have an opportunity to change the face of neuroscience moving forward. It’s something we’re incredibly passionate about: being able to remove the barriers to diversity,” Kucenas said. “Neuroscience is one of the most complicated biomedical sciences, the idea being how to understand our own existence, and we need more than just a small portion of the population working on that problem. I think having students in our program who come from all backgrounds, all countries, will allow us to attack that problem in a unique way.”

It’s Copperhead Season in Virginia. Here Is What You Need to Know END_OF_DOCUMENT_TOKEN_TO_BE_REPLACED

What’s Next for UVA’s Class of 2022? END_OF_DOCUMENT_TOKEN_TO_BE_REPLACED