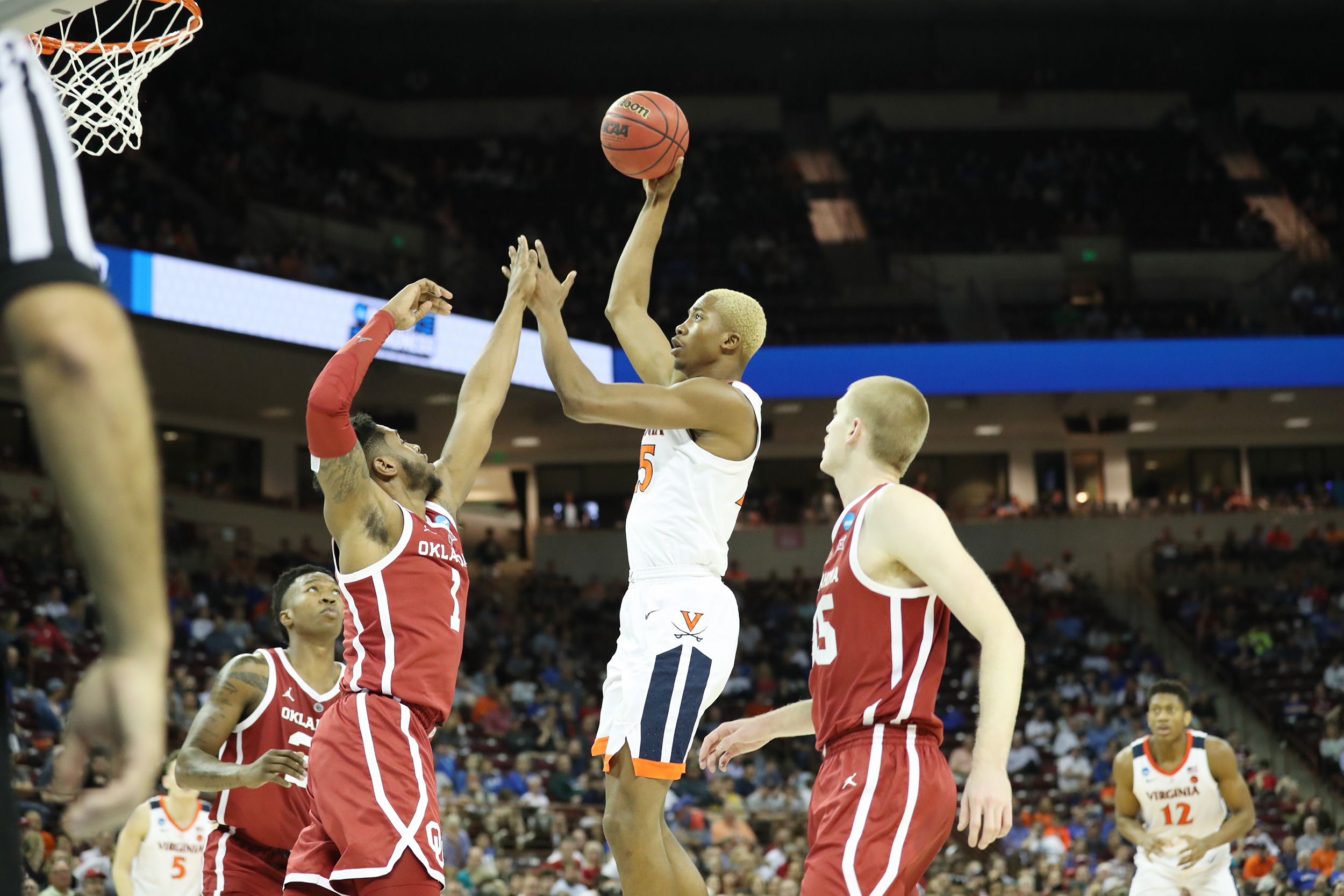 Mamadi Diakite rises above Oklahoma players during Virginia’s 63-51 winning game in the Round of 32. (Photo by Matt Riley, UVA Athletics)

There was a tone-setting screen by Jack Salt, a driving dunk by Jay Huff, a behind-the-back pass by Kyle Guy – plus several Mamadi Diakite highlights that made commentator Jim Nantz’s voice get nearly as high-pitched as on his famous calls at The Masters.

And, of course, there was the usual stifling defense throughout.

Yes, Wahoo Twitterverse loved nearly every second of the University of Virginia men’s basketball team’s 63-51 win over Oklahoma on Sunday night that moved No. 1 seeded UVA into the NCAA Tournament’s Sweet 16.

A game after a tougher-than-expected test from Gardner-Webb University, Cavalier fans and Coach Tony Bennett never had to sweat.

“Virginia Basketball is alive and well in the NCAA Tournament,” Nantz proclaimed at the game’s conclusion.

Here’s a sampling of the Twitter reactions during and following the ’Hoos big win.

When Tony Bennett says he is proud of you: pic.twitter.com/jDr5NsMLI4

The aforementioned dunk by Huff was also well-received.

He’ll Huff and Puff and throw the dunk down #WAHOOWA #UVAvsUO pic.twitter.com/XKZfaxNvKu

How cool is this? Former UVA teammates Isaiah Wilkins and Devon Hall cheered the ’Hoos on together! Charge your battery, Isaiah.

Watching the game with my bro pic.twitter.com/uKXv7FC75l

Alumna Caroline Darney, a reporter for the popular UVA fan site Streaking the Lawn, was quite excited.

I love seeing Mamadi do the post game...he's the best and such a fun interview.

Just realized that I am getting married in Charlottesville on Tony Bennett’s 50th Birthday! #Wahoowa @UVAMensHoops

Virginia Basketball. A thing of beauty.

UVA President Jim Ryan may have summed up the win best.

Some recommended reading for the week: https://t.co/k2dtukY7bV #wahoowa