As Houston Looms, We Wonder: What Are the Most Memorable Games in JPJ History? 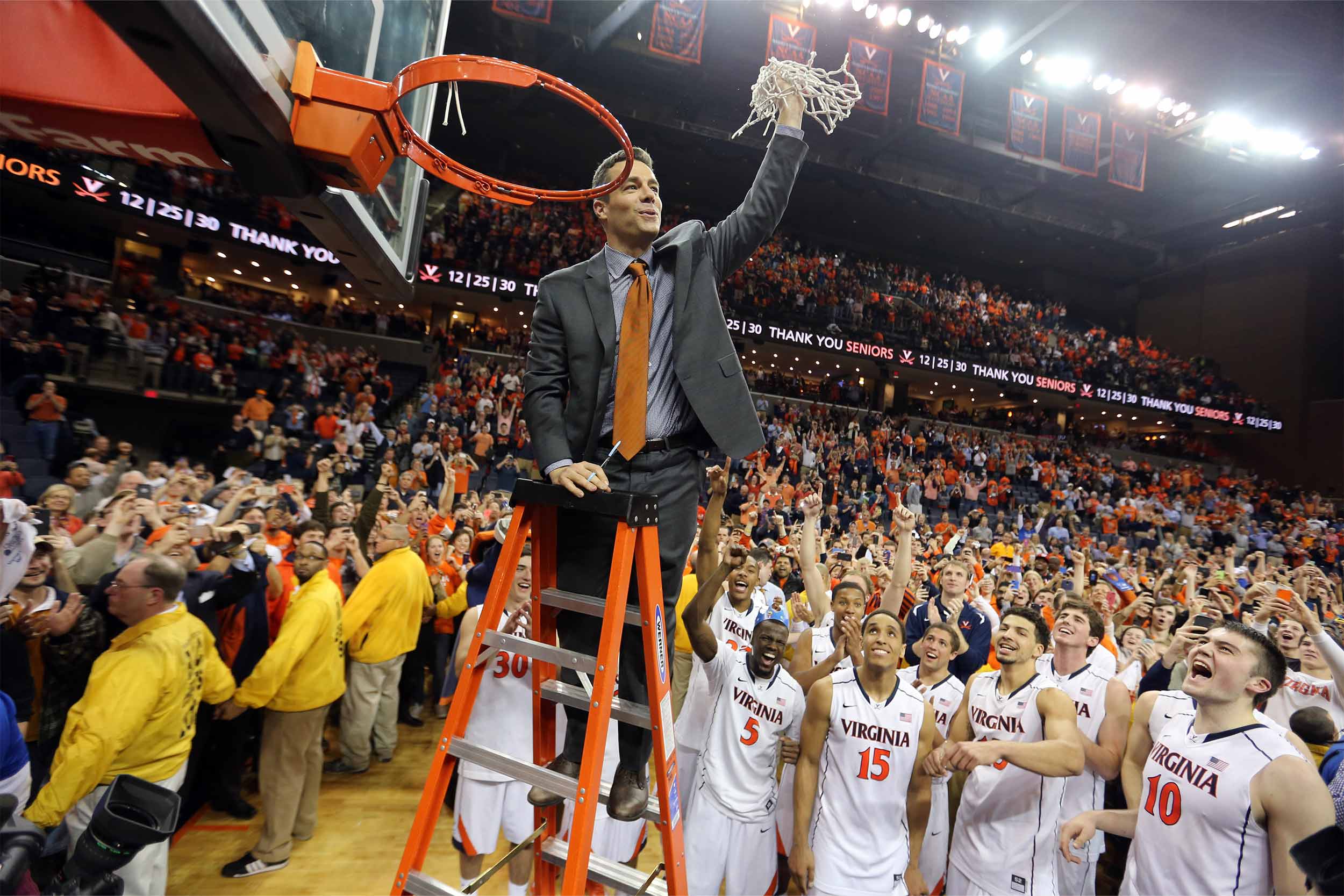 While Saturday’s game has all the makings for a great atmosphere at John Paul Jones Arena, it’ll be tough to top this scene following UVA’s conference-clinching win over Syracuse in 2014. (Photo by Matt Riley, UVA Athletics)

University of Virginia fans have seen up-close their Cavaliers take part in several buzzworthy matchups over the last decade and a half – from high-stakes battles with rivals Duke University and the University of North Carolina to unique clashes with traditional powers University of Arizona and Villanova University.

In many instances, the results of these contests have altered the Atlantic Coast Conference title chase or the NCAA Tournament seeding picture.

JPJ’s big-game reputation is only expected to grow Saturday when the undefeated and second-ranked Wahoos (8-0) host fifth-ranked University of Houston (10-1). Tipoff is set for 2 p.m. ESPN2 will televise the highly anticipated showdown between a couple of Final Four contenders.

A sellout crowd is expected.

All this buildup got us thinking: What are some of the most memorable games in JPJ’s short history? 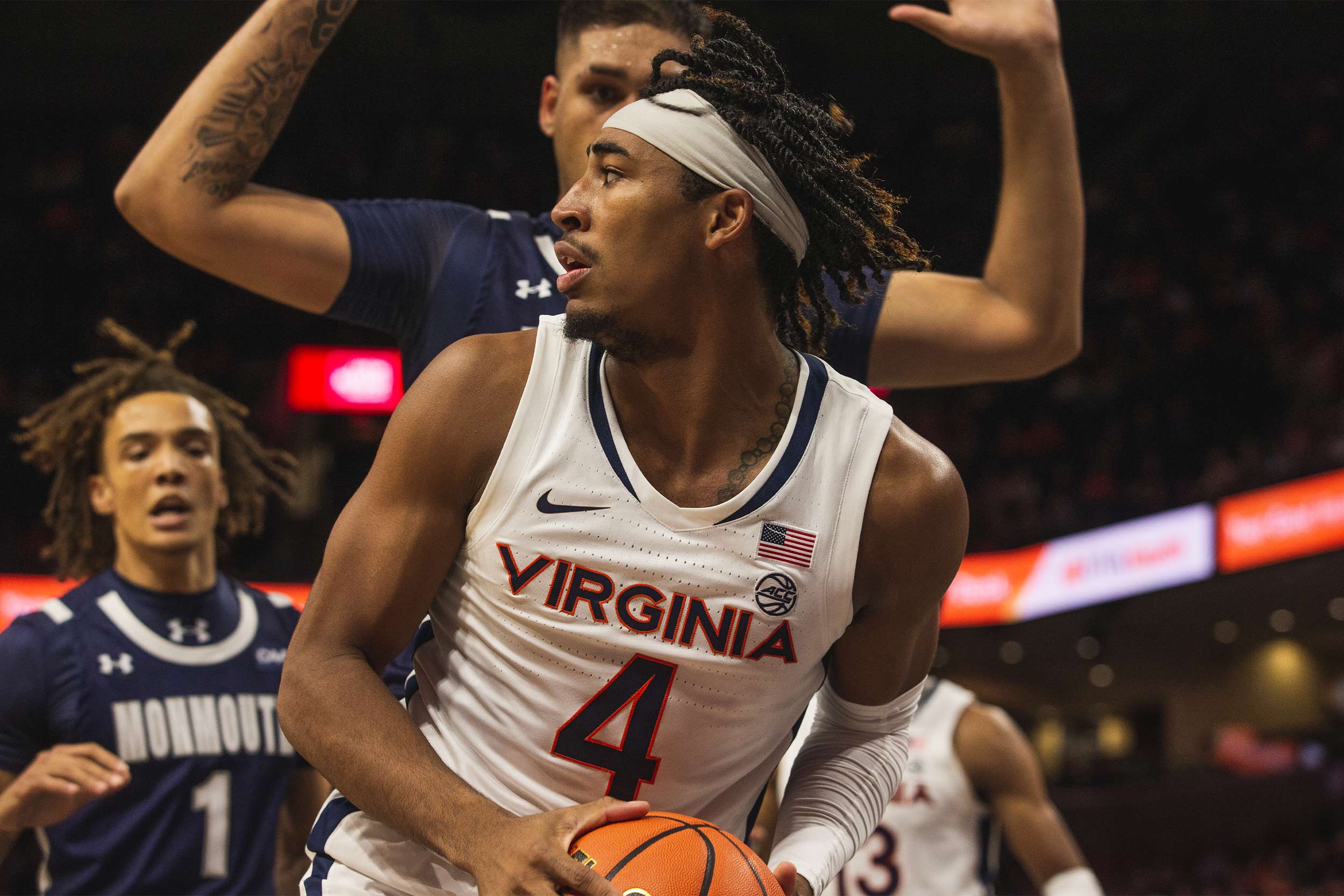 Armaan Franklin is one of four UVA players averaging at least 10 points per game this season. (Photo by Emily Faith Morgan, University Communications)

A crowd of 15,219 – which still stands as the arena’s record – watched famous announcer Michael Buffer (of “Let’s get ready to rumble!” fame) deliver the starting lineup, Mamadi Diane score 25 points and the Cavaliers overcome a 13-point halftime deficit to stun the Wildcats.

The signature moment of Sean Singletary’s storied UVA career came with one second left in this game when he hit an acrobatic, fade-away floater to give the Cavaliers a 68-66 overtime win over No. 8 Duke.

Singletary, whose No. 44 jersey was retired by Virginia in 2009, famously stared into an ESPN camera after the shot, a gesture that’s still celebrated by the Wahoo faithful.

“It was a spur-of-the-moment thing,” Singletary told UVA Today in 2019.

The two-time All-ACC performer scored a career-high 36 points to lead the Cavaliers to a 73-68 upset of No. 3 Duke. JPJ rocked from the opening tip to a celebratory court storm.

The regular season that kick-started UVA’s rise as a national power under Bennett culminated with an all-out party at JPJ on a Saturday afternoon as the No. 12 Cavaliers clinched their first outright ACC regular-season championship in 33 years with a 75-56 rout of No. 4 Syracuse.

A sellout crowd stayed late to watch the Wahoos cut down the nets. The Hoos did the same two weeks later in Greensboro, North Carolina, after they won the ACC Tournament.

With ESPN’s “College GameDay” broadcasting live from JPJ in the morning, this matchup of top-10 teams had all the juice you wanted for a big ACC game late in the regular season.

Malcolm Brogdon then went ahead and owned the spotlight.

In a showdown of the two leading contenders for ACC Player of the Year, Virginia’s Brogdon outshined UNC’s Brice Johnson by scoring 17 of his 26 points in the first half of a 79-74 win.

“Malcolm in the first half was as good a performance as we've had against us this year, maybe several years," North Carolina coach Roy Williams said afterward.

Brogdon went on to win ACC Player of the Year, topping Johnson by 29 votes.

The final home game of Brogdon’s career will always be remembered for a performance by one of his less-heralded classmates.

Mike Tobey, a 6-foot-11 senior who totaled eight points and six rebounds in the three previous games combined, exploded for 15 points and 20 rebounds to headline No. 4 UVA’s 68-46 demolition of No. 11 Louisville.

The win capped UVA’s first undefeated season at home since 1981-82.

This game marked the first time that the Cavaliers and Hokies were meeting each other while both were ranked in top 10.

Afterward, it was clear which of the state rivals belonged there.

The 10th and final block of Jay Huff’s night gave UVA its biggest win in the pandemic-shortened 2019-20 season.

Huff swatted a short shot attempt from Duke’s Vernon Carey with three seconds remaining in the game, preserving the Cavaliers’ 52-50 victory over the seventh-ranked Blue Devils and sending JPJ into a frenzy.

In addition to the blocks – the most by a Virginia player since Ralph Sampson had 10 rejections against Old Dominion on Dec. 29, 1979 – Huff also scored 15 points and grabbed nine rebounds.