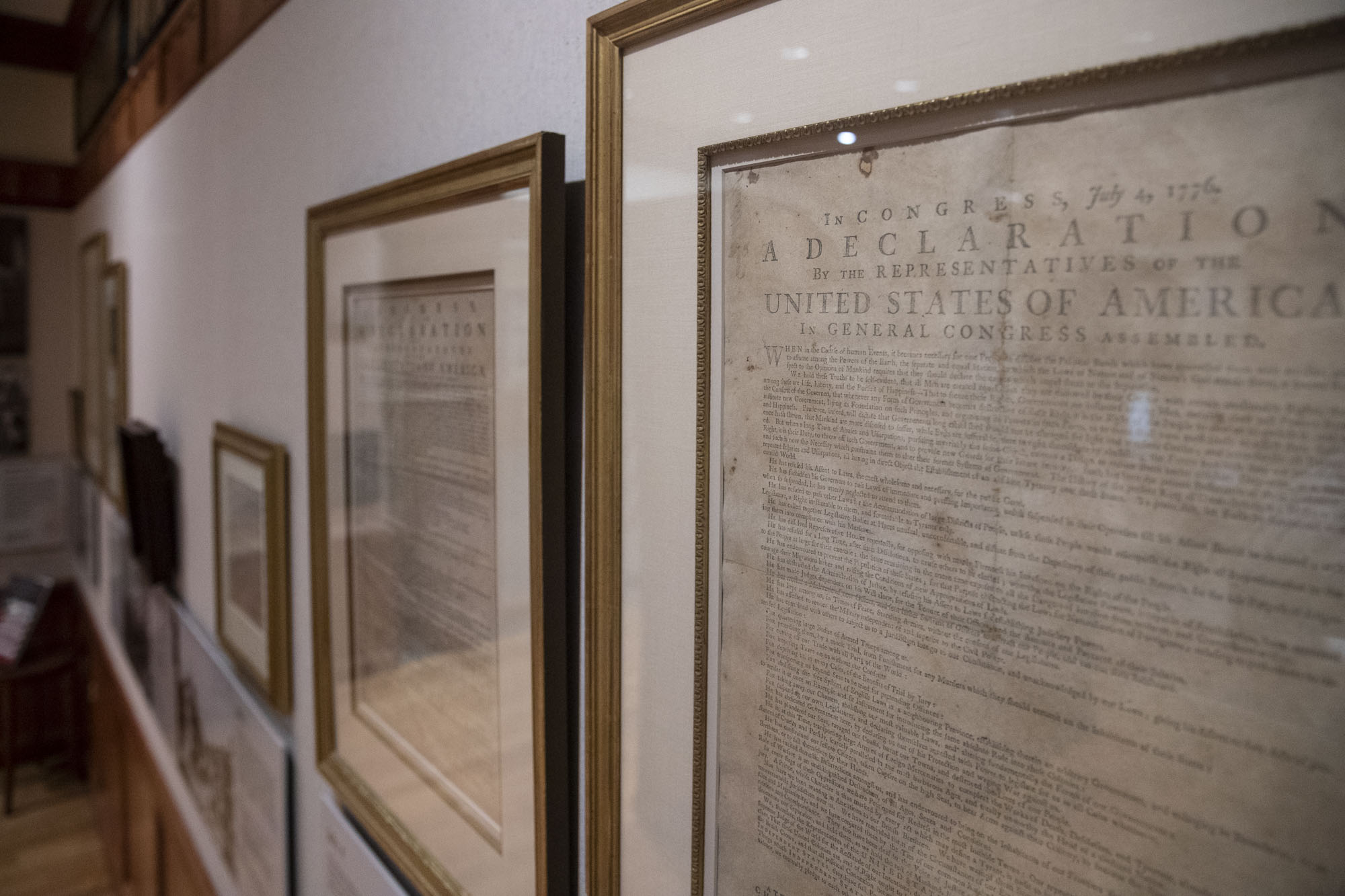 After graduating in 1946 from the University of Virginia’s School of Engineering and Applied Science, Albert Small began collecting rare books and manuscripts pertaining to Thomas Jefferson, UVA and American history.

So, you might say the Washington, D.C. native – who spent his career in construction and real estate – hit the jackpot when he got his hands on the John Dunlap broadsides, which were the first published copies of the Declaration of Independence.

In 1999, Small donated the broadsides, plus other letters and documents pertaining to the writing and signing of the Declaration, to UVA.

Today, the former Board of Visitors member’s collection – considered the most comprehensive of its kind – is on permanent display at UVA’s Albert and Shirley Small Special Collections Library.

“He spent many years forming the collection, painstakingly, one item at a time through booksellers, purchasing at auction and so on,” curator David Whitesell said.

The jewels of the Albert H. Small Declaration of Independence Collection are two original Dunlap broadsides, of which Whitesell said only 26 are known to exist. Small’s copy is the one on display. The library also owns a copy that it purchased in the 1950s. It is in poorer condition and only made available to qualified researchers.

The collection tells the story of the Declaration, from its preparation, Jefferson’s authorship, production and printing to the individuals behind the seminal moment in American history.

In July of 1776, John Dunlap of Philadelphia was the official printer to the Second Continental Congress, whose broadsides – including those of the Declaration, the wording of which was formally approved on July 4 – were dispatched to be posted and read aloud. The distribution of the Dunlap broadsides prompted additional printings of the text in colonies from New Hampshire to Virginia. Through Dunlap’s broadsides, news of independence spread.

“It’s a major attraction for people all year round,” said reference librarian Penny White, alluding to the broadsides. “There aren’t that many of them left and we happen to have two, which puts us on par with the Library of Congress.” 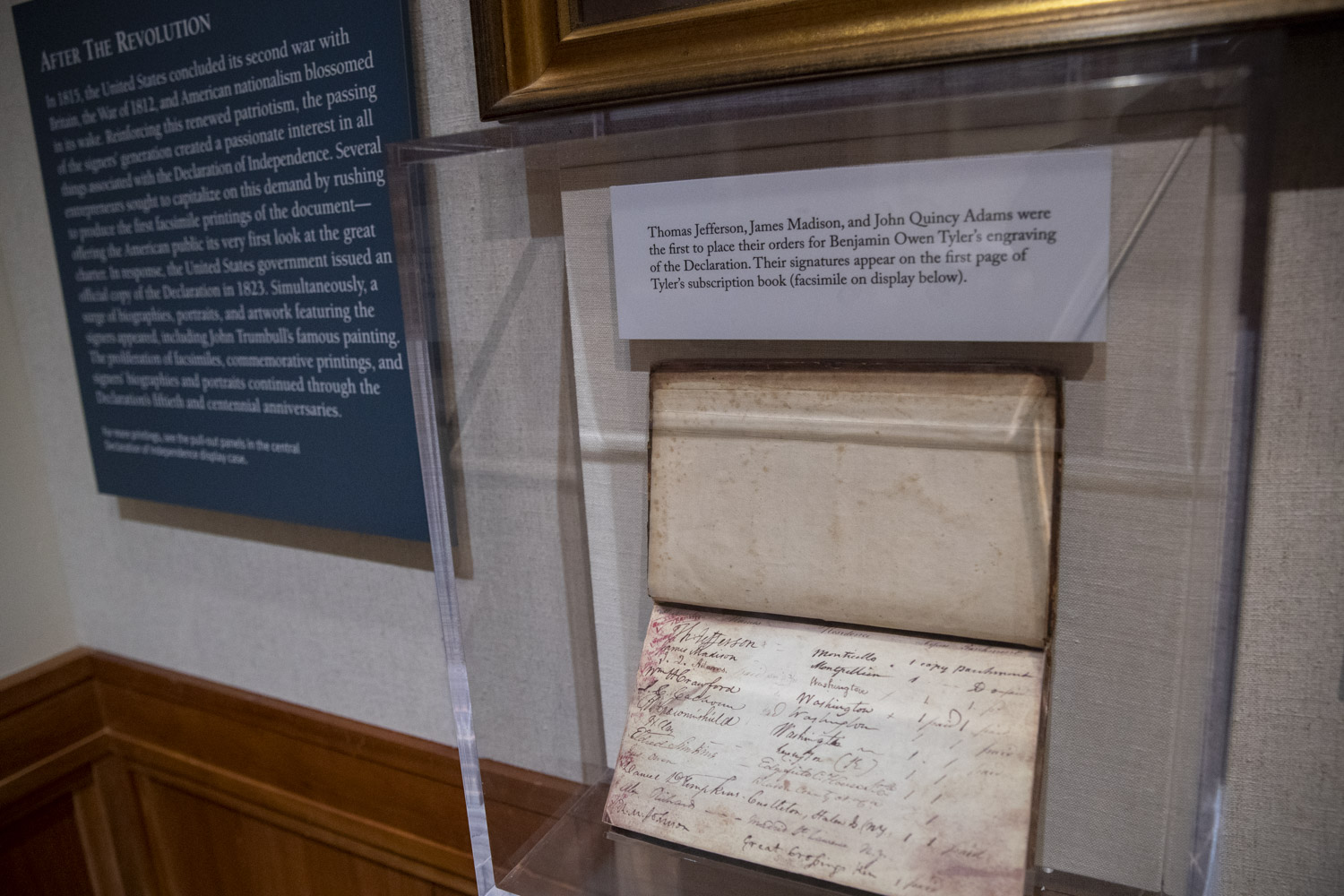 One of the first things you see in the exhibit is a large sign with the words “We hold these Truths to be self-evident.” On the walls are rare paintings of the Declaration being signed, along with portraits and signatures of the authors. A documentary film about the Declaration of Independence, its signers and highlights of the collection is shown on a continuous loop. A large interactive tablet allows visitors to scroll through history with the touch of their fingers.

In the summer, the exhibit hosts symposiums and is a popular tourist stop, especially around Independence Day.

“There is increased foot traffic in the Declaration gallery at this time of year generally,” said Heather Riser, the director of operations for the Harrison-Small Research Center.

The exhibit, which is free and open to the public, will be closed Wednesday before resuming regular hours of operation on Thursday.

As you might expect, Small remains quite proud of his collection.

“Usually he pops in when he’s in Charlottesville,” Whitesell said.

What Is the ‘4th Side’? END_OF_DOCUMENT_TOKEN_TO_BE_REPLACED