How to Sink ESPN’s ‘College Gameday’ Half-Court Shot, By the ’Hoo Who Did It 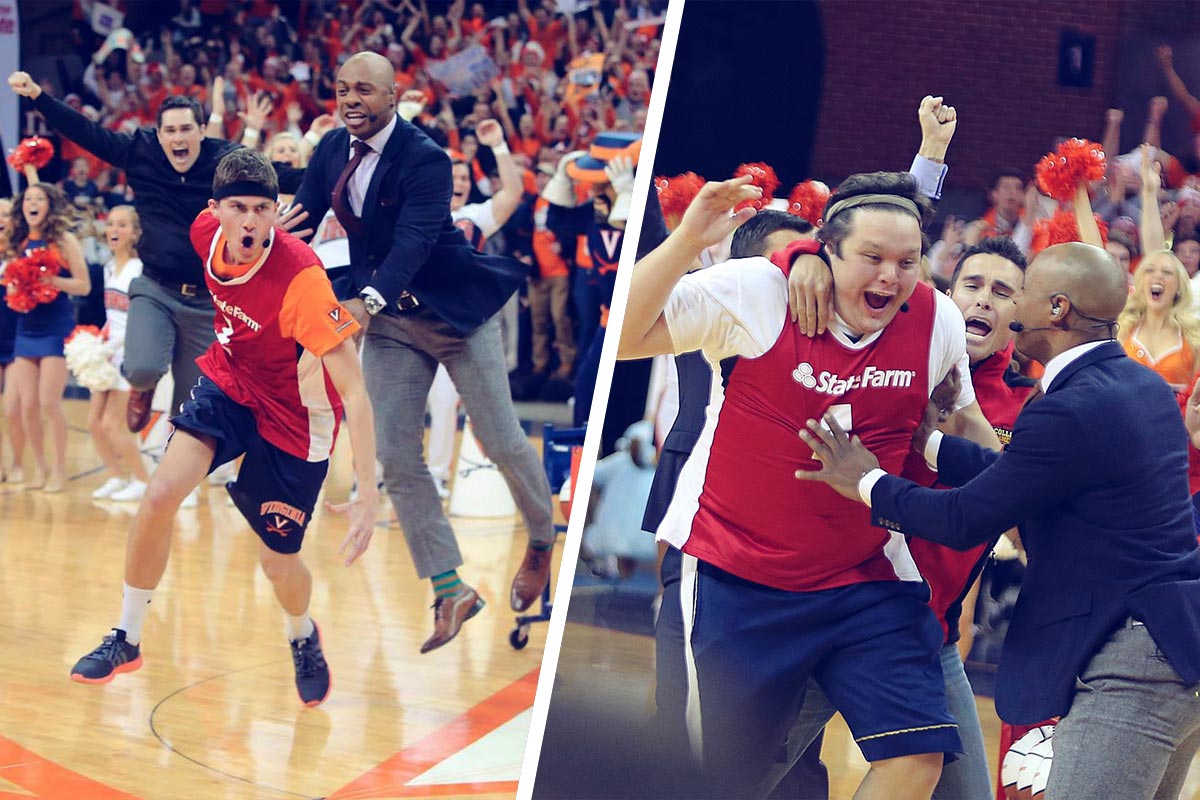 ESPN broadcaster Rece Davis is on record as saying the University of Virginia is peerless as a host site for its “College GameDay” basketball preview show. The raucous atmosphere at John Paul Jones Arena in 2015 and 2016 “went above and beyond,” surpassing even the basketball-crazed University of Kentucky, Davis said.

Former UVA students Tyler Lewis and Andrew Board played a large role in that.

A year later, Board, funny enough, used the board – as in the backboard – to bank in his half-court shot and again claim $18,000 as Wahoo fans went berserk.

The long-range connections, in back-to-back years, both occurred on the players’ first attempt – contestants are given 18 seconds to make one shot – shocking everyone, including Davis and fellow commentators Jay Williams and Jay Bilas.

According to ESPN, the odds of hitting a half-court shot are roughly 1 in 100.

Given that, the odds of two players hitting consecutive shots are approximately 1 in 10,000, according to UVA statistics department lecturer Rebecca Hehn.

According to Hehn, the odds of three UVA students making the shot three years in a row on their first attempt are roughly 1 in 1,000,000.

With that in my mind, we reached out to Lewis for a few tips.

Q. There’s going to be a lot of pressure on the next student to follow in your footsteps and make the shot. What would your advice be? Any training tips? Do you recommend chopping wood, pulling a sled or carrying logs in the snow like Rocky did in “Rocky IV”?

A. Training is key. In the week prior to “GameDay,” you have to simulate the “GameDay” conditions as best you can. Wake up at 6 a.m. after a night out on the Corner, wait outside JPJ in the freezing cold for four hours, then head to a gym and put up some half-court shots. If you stick to this training schedule, you will knock it down, no problem.

In all seriousness, my advice would be to enjoy and embrace the moment. You are going to be nervous, but try to be light-hearted and have fun with it. And since you only have 18 seconds to make the shot, try to get off as many shots as you can.

Q. Do you still have to pinch yourself that you made the shot – and on your very first try?

A. Honestly, when looking back at that day three years ago, it is all a blur. Everything happened so fast and the crowd at JPJ was absolutely electric. I have a solid basketball background, so I knew I had a decent chance of making it, but the fact that I was able to do it in front of 6,000 of my classmates is still pretty surreal.

Q. If you had to go make a half-court shot again right now, roughly how many attempts do you think it would take you?

A. Oh, I would probably be terrible right now. Besides playing in intramural games at UVA, I have not attempted a half-court shot since “GameDay.” It’s my way of going out on top.

Q. Looking back, what are your fondest memories of the whole “GameDay” experience?

A. I would say many of my fondest memories took place before the half-court shot. I was in Hoo Crew, so the preparation for “GameDay” was a blast. Whether it was making signs, painting Beta Bridge, cheering as the “GameDay” bus drove down Rugby Road, or waiting in line for “GameDay” at 5 a.m., the whole experience was something I will never forget. Aside from the preparation phase, getting the chance to meet J-Will and Rece was really cool. And jumping onto the scorer’s table after making the shot felt pretty sweet as well.

A. Being a business guy, I invested the money in a mutual fund shortly after making the half-court shot. It’s nice to have a security blanket in case of unexpected circumstances.

Q. What were the days, weeks and months like for you after you hit the shot?

A. The next few days after making the shot were crazy. It was like being a mini-celebrity for a week. People would come up to me on Grounds and congratulate me or be like “Hey, are you that guy ...?” It was pretty funny that so many people recognized me.

And my friends and family were so happy for me and went crazy when they found out I hit the shot. I am truly grateful to have such great people around me at UVA.

Q. Do you run into people who still remember your shot?

A. Not so much anymore. Only the hard-core UVA sports fans still remember and recognize me.

Q. How, if at all, has making the shot changed you?

A. I wouldn’t say that it has necessarily changed me. But it did give me the confidence to perform well under pressure. Making a half-court shot on national TV in front of 6,000 of my classmates didn’t come without nerves, but being able to stay in the moment and keep my focus are two things that I carry with myself today.

It also shined a light on how amazing the people around me are. And it’s nice to always have a go-to interesting fact about myself. It is usually a great conversation starter.

Q. Where were you when Andrew hit his shot the next year? What was your reaction? Incredulous like the rest of us?

A. I was actually studying abroad in New Zealand at the time during my third year at UVA. I made sure to wake up early (because of the time difference) to watch “GameDay” and see if we could make the shot two years in a row. It killed me that I couldn’t be there, but I was so excited to see Andrew make the shot.

He kind of hesitated at first when he got the ball, so it was like he was going in slow motion. It was quite the dramatic effect when he went on to bank in his first attempt. I was like “Holy ****, they have to come back to UVA next year to see if we can make it three years in a row!”

I guess three times in four years isn’t too bad.

Q. What did you study at UVA and what are you up to now?

A. I studied [at the McIntire School of Commerce] at UVA, with a concentration in IT-business analytics. I also had an economics minor. Currently, I am doing a graduate capstone program in actuarial science at the University of Wisconsin-Madison. I hope to secure an actuarial job in the future and move back down to the Virginia area.

Q. What are your thoughts on the season UVA is currently having?

A. I think we can win a national championship this year. Last season, we relied way too much on [now-graduated point guard] London [Perrantes]. This year we seem to be sharing the ball a lot better, and the right guys are taking the majority of the shots.

Defensively, you can really see the work they put in during the offseason. The Pack-Line D is smothering. Going from unranked in the preseason to No. 2 in the country is quite the accomplishment.

Monkeypox Is Spreading, But University’s Risk Believed To Be Low END_OF_DOCUMENT_TOKEN_TO_BE_REPLACED

Q&A: Assessing the Risks and Rewards of Pelosi’s Plan to Visit Taiwan END_OF_DOCUMENT_TOKEN_TO_BE_REPLACED

These Giant Wind Turbines, Inspired by Palm Trees, May Be the Future of Renewable Energy END_OF_DOCUMENT_TOKEN_TO_BE_REPLACED