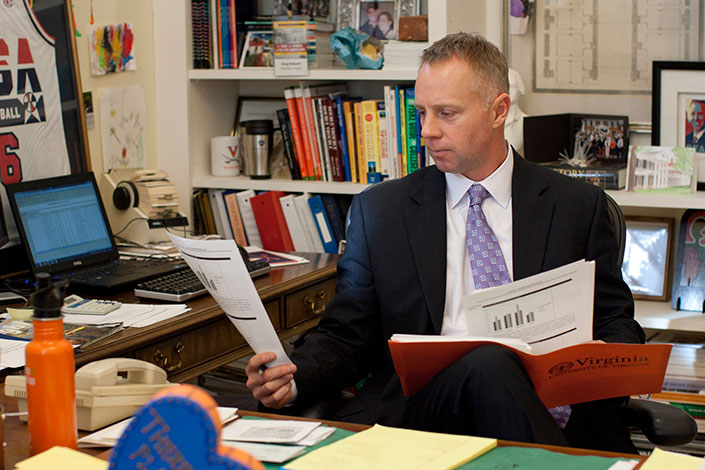 Efforts to attract students from families whose members have never attended college are bearing fruit at the University of Virginia.

Preliminary analysis of applications for admission received by the Jan. 1 deadline for the class of 2019 shows that applications from first-generation students increased by 12 percent compared with the previous year.

“We are very pleased that more and more first-generation students see U.Va. as a compelling option,” Dean of Admission Greg Roberts said. “This has been an area of emphasis as we work to grow awareness of the University to key potential applicants, including first-generation students and traditionally underrepresented populations such as those with high financial need.”

Applications from minority students held steady at 29.4 percent of the 31,107 first-year applications.

Overall, the number of applications is nearly identical to the previous year, following a string of record-setting years. With final numbers in all categories expected in February, the preliminary numbers show that 31,107 completed applications by the deadline this year, compared with 31,336 the previous year. The target enrollment for this fall’s entering class is 3,675 students.

Roberts and his team in recent years have targeted outreach to high schools with high percentages of students receiving reduced-price or free lunches, statistics that indicate higher populations of students with financial need. The University encourages principals of those schools to nominate students for free summer programs here, and has focused on building awareness of financial assistance efforts, including the Blue Ridge Scholarships.

U.Va. admissions officials also travel annually with counterparts from Yale University, Harvard University and Princeton University, visiting urban and rural school districts alike with an emphasis on those with students who are often underrepresented on college campuses.

The University also is in its second year of a partnership with the Posse Foundation. The national program enhances higher education access by pairing diverse teams of student leaders from urban schools – mainly public and charter schools –with top colleges and universities. U.Va. has pledged to admit a 10-member “posse” from Houston for five consecutive years, with each student receiving a full-tuition scholarship.

One trend growing more apparent in the past two years is the growing popularity of U.Va.’s early action program. Under the program, students who apply by Nov. 1 are guaranteed a decision by Jan. 31. Those receiving an offer of admission have until May 1 to make their decision.

U.Va. previously offered a binding early decision program. Under that approach, which was modified in 2007, applicants were required to commit to attend U.Va. if they were admitted early. The University shifted away from that approach in part because it required students to make a commitment before being able to evaluate financial aid offers.

Students admitted under the current early action program can apply to any school they wish, and compare financial aid offers before making a final choice.

Data on the breakdown of this year’s applications from Virginians and out-of-state residents will not be complete for several weeks.

Monkeypox Is Spreading, But University’s Risk Believed To Be Low END_OF_DOCUMENT_TOKEN_TO_BE_REPLACED

Q&A: Assessing the Risks and Rewards of Pelosi’s Plan to Visit Taiwan END_OF_DOCUMENT_TOKEN_TO_BE_REPLACED

These Giant Wind Turbines, Inspired by Palm Trees, May Be the Future of Renewable Energy END_OF_DOCUMENT_TOKEN_TO_BE_REPLACED