Inspired by the World, Chris Li Turns Nature Into Nanotechnology 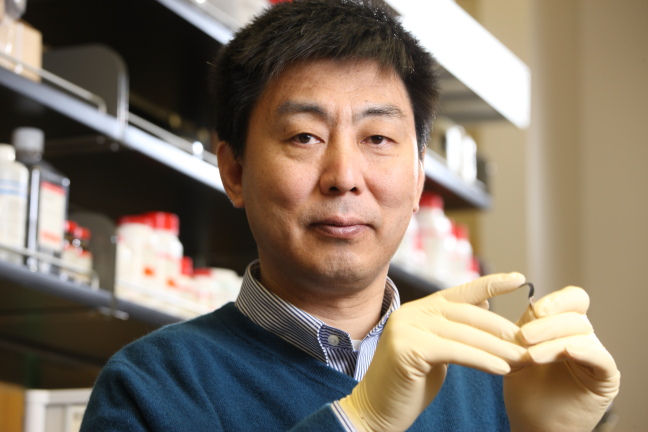 Xiaodong (Chris) Li is one of 13 new engineering faculty hires for the current academic year and is the second of two faculty members hired as a Rolls-Royce Commonwealth Professor.

The key to Xiaodong (Chris) Li’s success is his ability to see opportunity in the ordinary. Take, for example, the common cotton T-shirt. Where others might see a ubiquitous item of apparel, Li – recently appointed Rolls-Royce Commonwealth Professor at the University of Virginia’s School of Engineering and Applied Science – sees a platform for innovation.

In 2010, Li made The New York Times’ “Year in Ideas” list for developing a process to make an armored T-shirt. He dipped an off-the-shelf shirt in a boron-nickel solution and heated it to 1,160 degrees Celsius. The result: a boron-carbide nanowire and carbon-microfiber shirt that retains the stretchability of cotton. The shirt, which turns a basic black in the process, provides excellent protection against harmful UV rays and radiation.

Two years later, Li took another T-shirt and turned it into a wearable capacitor, a device capable of storing an electrical charge. He soaked the T-shirt in fluoride, baked it at high temperatures in the absence of oxygen and turned the cellulose in the cotton into activated carbon. He dedicated small swatches of the fabric to serve as electrodes and coated the fibers with nanostructured manganese oxide, producing a stable, high-performing supercapacitor.

“This flexible material could be used to power rollup cellphones or computers,” Li said. “Or people could simply charge their cellphones by putting them in their pockets.”

Li’s key insight was that he saw the cotton T-shirt material as both template and carbon source. Previous attempts to create armored fabric without this template were undermined by the tendency of the boron-carbide nanowires to bunch up.

Li looks to nature as well as to everyday objects for inspiration. He takes an abalone shell and drops it on his desk, where it lands undamaged. “Nature has found a design that transforms an abundant but brittle raw material – a form of calcium carbonate called aragonite – into fracture-resistant mother-of-pearl,” he says. “What’s more, it has developed a way to create this design with a minimum amount of energy.”

His interest in mother-of-pearl has led Li to produce a series of papers on the structures that provide its strength, but his overriding goal is practical. He wants to apply the knowledge he gains from nature and combine it with the techniques of nanotechnology to produce better products more efficiently.

Li sees biological processes and materials as the basis for introducing high-value-added materials design and manufacturing in the commonwealth. “I see my appointment at U.Va. as an opportunity to work closely with the private sector to increase its competitiveness,” he said. Li plans to spend the spring cultivating contacts with companies in Virginia.

Li is also drawn to biomaterials and processes because they provide a pattern for green design and manufacturing. “Nature provides an example for how we can use resources efficiently and sustainably,” he said. “That’s critical for our future.”

Li is one of 13 new engineering faculty hires for the current academic year and is the second of two faculty members hired as a Rolls-Royce Commonwealth Professor. He is a graduate of the Harbin Institute of Technology in China and previously held a position as the distinguished professor in mechanical engineering at the University of South Carolina.