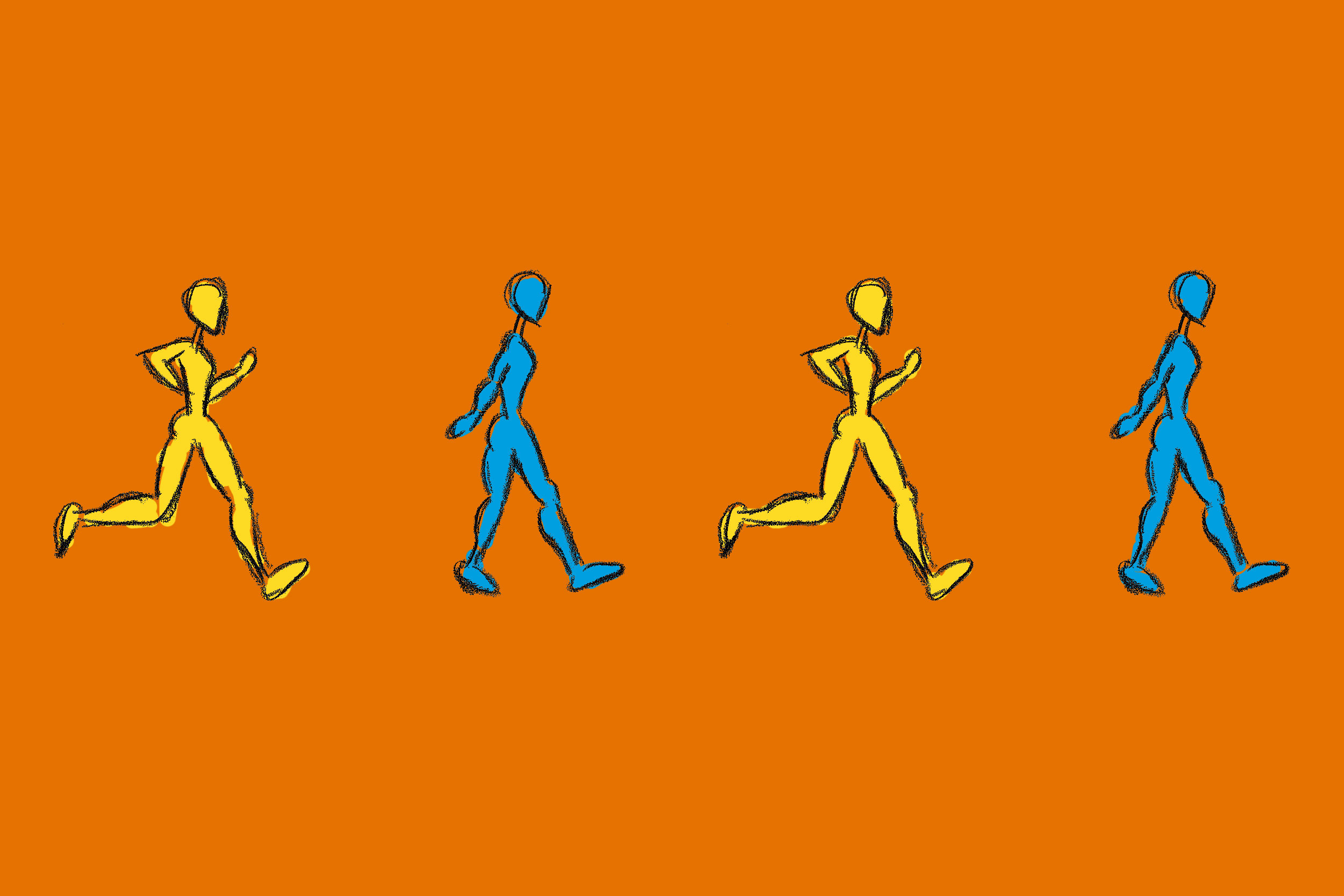 If your New Year’s resolutions included more exercise, you’re not alone. Every January, gyms and weight rooms across the country are flooded with people determined to improve their health through exercise. Recently, more and more are including high-intensity interval training, or HIIT, as part of their plan to get fit.

High-intensity exercise is loosely defined as anything that gets your heart pumping near or above 80 percent of your maximum heart rate – like a sprint around the track. In interval training, you alternate short bursts of high-intensity exercise with low-intensity recovery periods. Studies have shown that HIIT is more effective at burning calories than a continuous, moderate-intensity exercise like jogging – and for Americans, who list “lack of time” as the No. 1 reason they don’t get enough exercise, that’s a huge benefit.

But while calories are a helpful measure for weight loss, researchers at the University of Virginia’s Curry School of Education and Human Development are more interested in understanding “exercise as medicine” – how to design exercise for optimal cardiovascular and metabolic health.

Obesity-related diseases are among the most common in the country, affecting more than 30 million Americans. Nearly 9 percent of the U.S. population has Type 2 diabetes, while upwards of 35 percent have metabolic syndrome, a clustering of risk factors that increase risk for cardiovascular disease. At UVA’s Applied Metabolism and Physiology, or AMP, lab, researchers are focusing on the physiological processes associated with these conditions. They’re working to understand exactly how exercise affects the body – down to the tissue level – with the ultimate goal of helping pinpoint how doctors can prescribe the right “dose” of exercise to treat and prevent these diseases.

Steven K. Malin, assistant professor of kinesiology and a co-director of the AMP lab, said he and his colleagues were interested in examining the health effects of HIIT when compared to traditional, moderate-intensity, continuous exercise. Unlike other studies, they wanted to know how the two stacked up – independent of weight loss.

“Losing weight is not always the answer to improving health,” he said. “We were excited to identify what exercise can do for blood glucose control – how well the body processes sugar – before weight loss happens.”

To find out, researchers recruited about 30 men and women with pre-diabetes to participate in a two-week exercise trial. “These are the patients who are at the highest risk for developing Type 2 diabetes,” Malin said. “They have anywhere from a 5 to 10 percent chance of developing diabetes in the next year, and about a 30 to 40 percent chance in the next five years.” 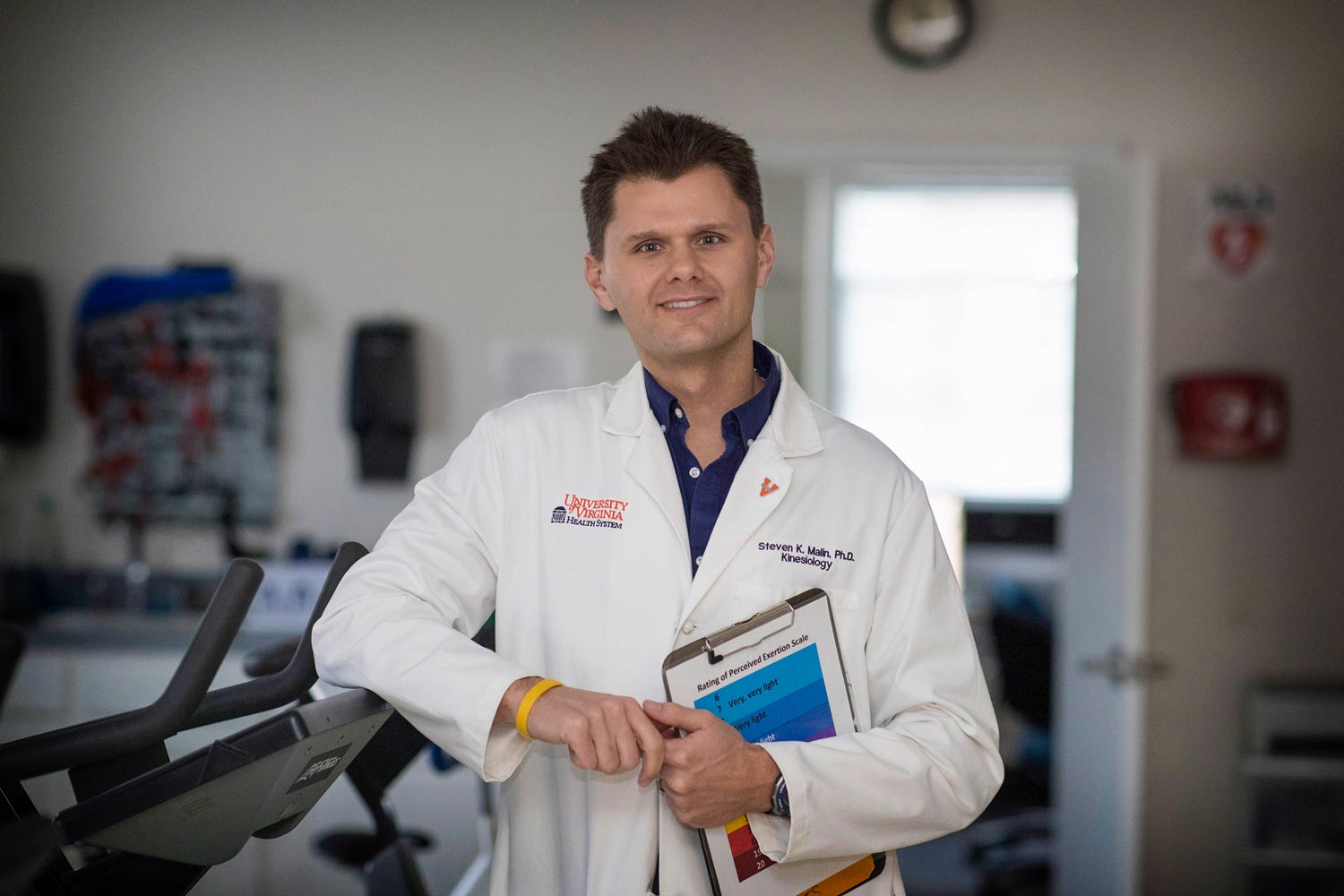 Curry School researcher Steven Malin said the best exercise regime may be the one you are willing to stick to. (Photo by Dan Addison, University Communications)

Participants were then randomly sorted into two groups. For 13 out of 14 days, both groups spent 60 minutes a day (the duration recommended by the Institute of Medicine for weight loss or management) exercising on a stationary bike. But, while one group exercised at a moderate intensity (70 percent of maximum heart rate), the other group alternated between three minutes at high intensity (90 percent) and three minutes at low intensity (50 percent).

Malin said the team chose two weeks because it’s enough time for the repeated effects of exercise to take place, but too short to see clinically significant weight loss or improvements in fitness. Importantly, both groups burned about 350 calories per session, which resulted in an average weight loss of less than two pounds.

“By design, we wanted to make sure that the number of calories people were expending were matched so that we could test the independent effect of intensity,” he said. “What we were really after was the question of how the body responds to exercise in an intensity-based manner.”

Researchers measured participants’ health by analyzing blood samples taken before and after exercise. They looked for changes in several key blood markers of health, including glucose tolerance, beta-cell function, arterial stiffness and appetite regulation. Given how efficiently HIIT has been shown to burn calories and promote fitness adaptation, Malin said the team expected to see a marked difference between the two exercise “doses.”

Instead, across nearly all measures, participants in both groups saw similar improvements. After only two weeks of either continuous or HIIT exercise, nearly 40 percent of participants were no longer characterized as having pre-diabetes. Both groups also saw improvements in the body’s ability to secrete insulin, decrease arterial stiffness and reduce food intake. The research team has now published four papers on their findings, with more forthcoming.

All of the data, Malin said, point to the conclusion that HIIT may not live up to the hype. “A lot of people will say that HIIT is a superior type of exercise,” he said. “While I won’t disagree that it’s a very effective modality, collectively, the findings we have so far – on glucose tolerance, insulin resistance, beta-cell function, arterial stiffness and appetite regulation – suggest that either exercise type is effective at improving these outcomes independent of intensity.”

Interval training still offers many benefits, particularly the ability to burn more calories in less time. But it may not be the preferred exercise choice for everyone. In that sense, these findings are great news: they suggest that exercise offers significant health benefits, no matter what kind you do. And while the most visible effects of exercise, like weight loss, may not show up right away – that doesn’t mean the exercise isn’t working.

“I think that’s a really powerful message,” Malin said. “It highlights that you don’t have to lose a lot of weight to gain metabolic and vascular health.”

While researchers are encouraged by these unexpected findings, Malin is quick to highlight the many unanswered questions that remain. The jury is still out on exactly how different lengths, frequencies and even different variations of high-intensity interval exercise affect the body. Many other factors can affect individual response to exercise.

For example, Malin said researchers at the AMP lab are pursuing studies that examine how different kinds of exercise interact with certain diets and medications. They envision a future where physicians can prescribe personalized exercise plans to their patients, a growing field of research known as individualized or precision medicine. Increasingly, researchers are looking beyond averages and digging into the many variations of human physiology and lifestyles that lead to varied responses.

“I think we’re really on the precipice of trying to push that envelope,” Malin said.

While there’s no one-size-fits-all approach for health and well-being, by figuring out how different “doses” of exercise affect the body – down to the cellular level – Malin and his team hope their results add to this growing body of research. Ultimately, they want to help people look beyond weight loss to understand their health from a more holistic perspective.

“This idea of exercise dose prescription is a huge passion of the AMP lab,” Malin said. “We want to figure out what’s the best way to prescribe exercise for multiple groups of people.”

Which kind of exercise is “superior?” It all depends on your goals. “For some, ‘best’ is determined by body composition or body weight,” Malin said. “For others, it’s quality of life or even quantity of life.”

If your New Year’s resolution is to improve your health, the most important thing is that you get moving – because in the end, the best exercise is the one you do.

“Both interval and continuous training seem to be effective at improving health,” Malin said. “The real question is, which one do you enjoy enough to stick with it?”

When Less Is More: How Harnessing the Power of Subtraction Can Add to Life END_OF_DOCUMENT_TOKEN_TO_BE_REPLACED