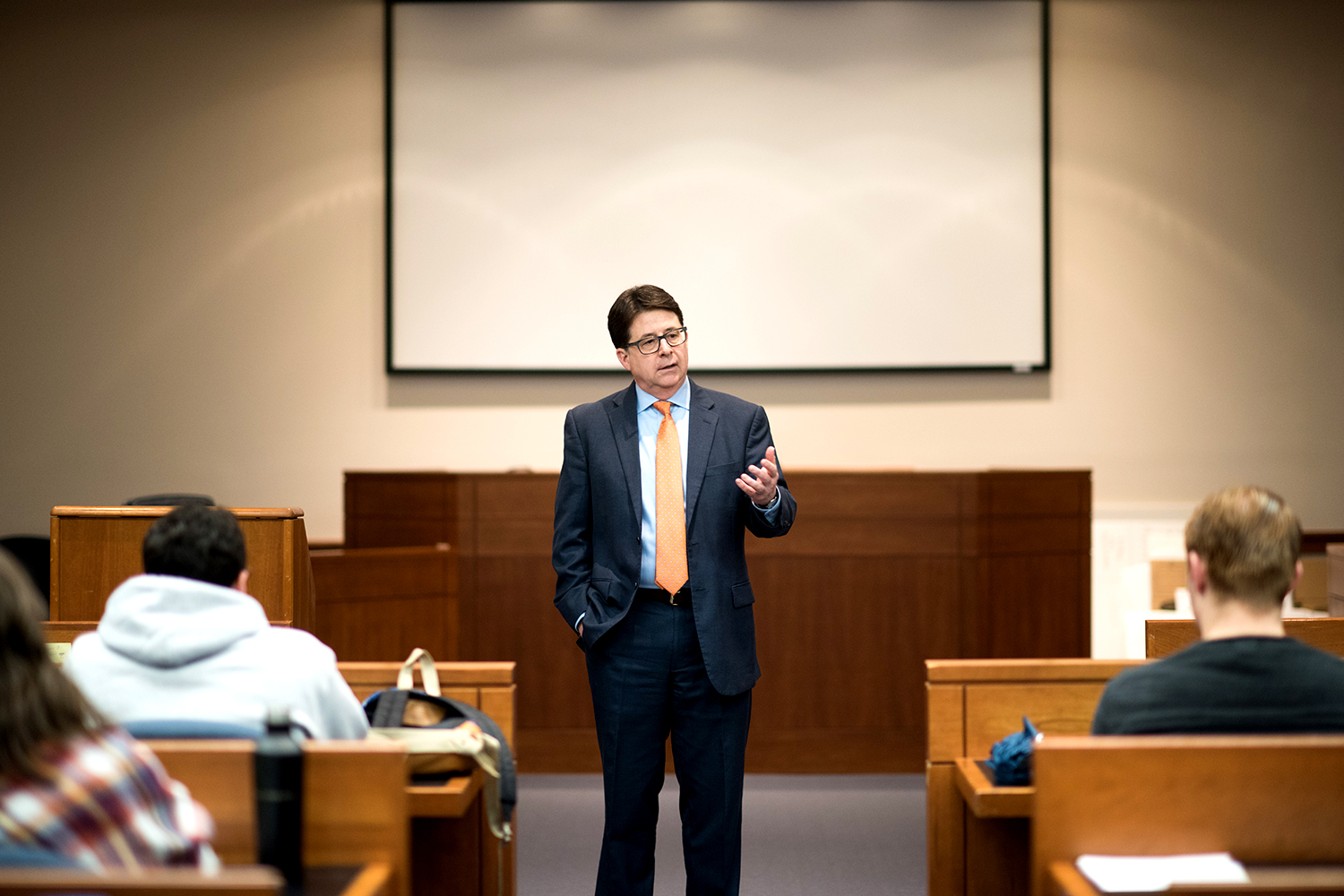 Dean Strang stood before a panel of federal appellate judges who had in front of them what appeared to be a documented confession from a teenager who was accused of killing her two young cousins. But did she really do it? There were extenuating circumstances that called into question whether her statement was truthful and voluntary.

He knew he was taking a risk, but he told the judges her story.

“I thought that I had to take the dry and make it wet – to make it human and real; to try to make it powerful,” he said.

Strang, a Wisconsin-based trial attorney and 1985 graduate of the University of Virginia School of Law who may be best known for his appearance in the Netflix documentary series “Making a Murderer,” recounted the story of United States v. D.F. on Tuesday as part of the school’s January term course, “Persuasion.”

An experienced lecturer who is teaching at UVA for the first time, Strang is co-teaching the weeklong class in conjunction with the course’s traditional instructors, professors Robert Nelson Sayler and Molly Bishop Shadel. For many students, the class introduces them to oral legal advocacy, and includes the opportunity for them to test their public speaking skills in front of their peers and expert instructors.

Strang used the Seventh Circuit U.S. Court of Appeals case, which ultimately threw out the accused teen’s statements in 1997, as an example of how truthful storytelling can be used by lawyers to persuade.

Although “you have to be very careful about taking an emotionally loaded story to an appellate panel,” he told the students, such strategies can pay off because they give judges or jurors the chance to take meaningful action.

Strang said the alleged confession by his client was given without her knowledge of it being a statement that could be used against her in court, and after weeks of coaxing by therapists in the county mental health center where she was held.

It was also within the context of recent racial harassment. The day that she began to claim wrongdoing had started with everyone on the ward losing their privileges due to a racial slur aimed at his client that was written on a bathroom mirror. Even so, his client was included in the punishment, which also involved being forced to wear a hospital smock and plastic slippers. The sanctions would be lifted as soon as someone admitted writing the epithet.

But no one did. Instead, the day ended in a different kind of confession, Strang said, when a therapist told his client she had to speak truthfully about her feelings in order to get the clothes and shoes she owned back. The conversation then veered to her alleged crime, and the therapist took notes.

The trial court had previously suppressed the statements, which rested on a therapist’s promises of restoration of privileges and leniency, and the therapist’s betrayal of confidentiality with the client. Strang knew the federal appellate judges wouldn’t be eager to affirm that ruling, because the statements were critical evidence.

But he also knew two of the judges on the three-person panel were grandparents, and might be sympathetic to the idea that his client was treated unfairly, if he could bring to life for them the reality of her plight.

“And so, I thought, I have at least two who will probably listen and will take it in,” he said.

Strang said human beings seem to be “hard-wired” to tell stories, and to remember and value them, which is important to client representation.

“We are storytellers as advocates, as lawyers,” he said. “But you have to be careful to match your story with your audience. The point is not that you like the story. The point is the audience will believe you, will hear the resonance of reality.”

Strang cited Shadel and Sayler's book, “Tongue-Tied in America: Reviving the Art of Verbal Persuasion,” in addressing the value of the Greek word “logos,” which refers to meaning and appeal to reason, as essential to telling persuasive stories. “Logos is the ability to excite the mind with reason,” according to Sayler and Shadel, with a “clear, precise presentation of facts.”

Strang said storytelling is just as important in contract negotiations or mediation as it is in the courtroom. But for those students who may feel nervous about public speaking, he said, the knowledge that they already know how to tell stories may help.

Strang also is the author of the book “Worse than the Devil: Anarchists, Clarence Darrow, and Justice in a Time of Terror.” His second work of legal history, exploring the 1918 federal trial of more than 100 Industrial Workers of the World members in Chicago, will be published in 2018.

Do You Know the History of Your Favorite Corner Spots? END_OF_DOCUMENT_TOKEN_TO_BE_REPLACED

Netflix to Add Ads. Why This Could Be a ‘Game-Changer’ for Your Viewing Experience END_OF_DOCUMENT_TOKEN_TO_BE_REPLACED

What’s Next for UVA’s Class of 2022? END_OF_DOCUMENT_TOKEN_TO_BE_REPLACED