He is using a three-year grant from the U.S. Department of Defense’s Emerging Capabilities and Prototyping Office to design, test and build an automated DNA analysis instrument small enough and light enough to fit into a backpack, and able to accomplish much of what a full-scale central laboratory can do – but quicker, onsite, and a lot less expensively.

UVA’s Applied Research Institute was critical in identifying and landing the research funding.

“The goal of my lab is to develop lab-on-a-disc technology with battery-run instrumentation,” Landers said. “The instrument needs to weigh less than 10 pounds, be roughly the size of three reams of printer paper, and cost an order of magnitude less than current technology. It will be able to conduct DNA analysis and comparison to an on-board profile database in less than 30 minutes. Those were our marching orders.” 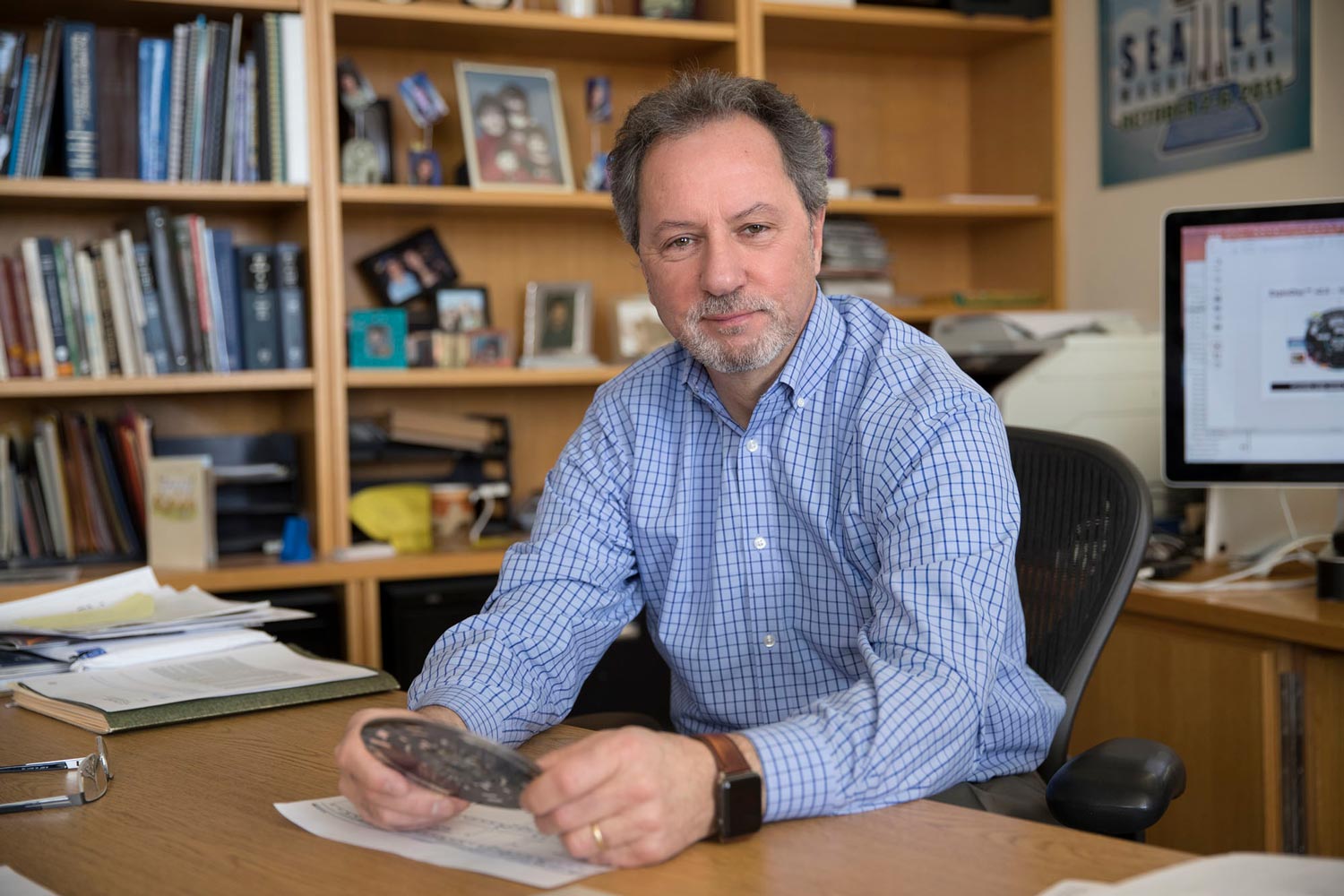 Landers and his team, which includes faculty and students in the mechanical and electrical engineering departments and others affiliated with UVA-based start-up TeGrex, are well on their way. The instrument under development uses microelectronics and unique miniaturized hardware to run the disc, and is designed to allow field analysis of tissue samples from essentially anywhere in the world, from battlefields to crime scenes, and could have broad applications in medical settings.

Landers – who started his career as a biochemist, and holds faculty appointments with UVA’s departments of Chemistry, Pathology and Mechanical Engineering – has devoted much of his career to miniaturizing standard laboratory processes so they can be accomplished simply, cheaply and quickly by minimally trained field technicians.

The new lab-on-a-disc technology he is developing will analyze dry or wet samples – such as cells swabbed from inside the mouth – to provide a quick, cheap and easy DNA profile of a subject using a simple-looking but sophisticated set of electronics mounted to what is essentially a modified laser-scannable DVD that is then put into the shoebox-sized, centrifuge-like instrument.

“The device will be able to extract DNA from a small sample of tissue, amplify the gene sequence and generate a DNA fingerprint in 30 to 45 minutes – roughly half the time of current technology,” Landers said. “It looks at 20 gene sequence locations on the chromosomes, where the sizing of repeat sequences provides a statistically relevant DNA fingerprint that is completely unique to each individual sampled. This is the kind of data that holds up in criminal court cases.”

Currently, samples from crime scenes and crime suspects are sent to forensic labs for analysis, which can take hours to days to weeks, depending on travel time, the availability of technicians, backlogs and other factors. But in many states, including Virginia, police can hold suspects for only four hours. Often, suspects are released before their DNA profile is acquired and matched to criminal DNA databases, or found to have no matches.

“With the technology we’re developing, the analysis and watch list matching can occur onsite, almost immediately, and then the data uploaded for a possible match on national or local DNA databases,” Landers said. “In many cases this could facilitate a quick arrest-or-release decision by police.

“We also can bring this technology to the civilian world in a powerful way. The medical applications are numerous.”

Landers already is partnering with a multi-organ transplant center in Toronto to consider the possibility of using the technology for home monitoring of immunosuppression effects on post-transplant recipients, a critical step for increasing the chance of a successful transplantation.

The lab-on-a-disc technology also could be used in general clinical offices for a range of tests, such as to determine a flu virus strain, bacterial infection, even for pinpointing forms of cancer or other genetic defects.

“You can envision a patient going to a doctor’s office, providing a blood or saliva sample, going back to the waiting room or to grab a cup of coffee, and 30 minutes later discussing the result with the physician,” Landers said. “This technology really offers the opportunity to radically improve the speed at which we can analyze DNA, at much lower cost, almost anywhere.”

A Year We Will Never Forget: 2019-20 in Review END_OF_DOCUMENT_TOKEN_TO_BE_REPLACED

‘What Will You Carry With You?’ Remarks From UVA President Jim Ryan END_OF_DOCUMENT_TOKEN_TO_BE_REPLACED