Law That ‘Changed the Internet’ Is Hot Topic During Democracy Event 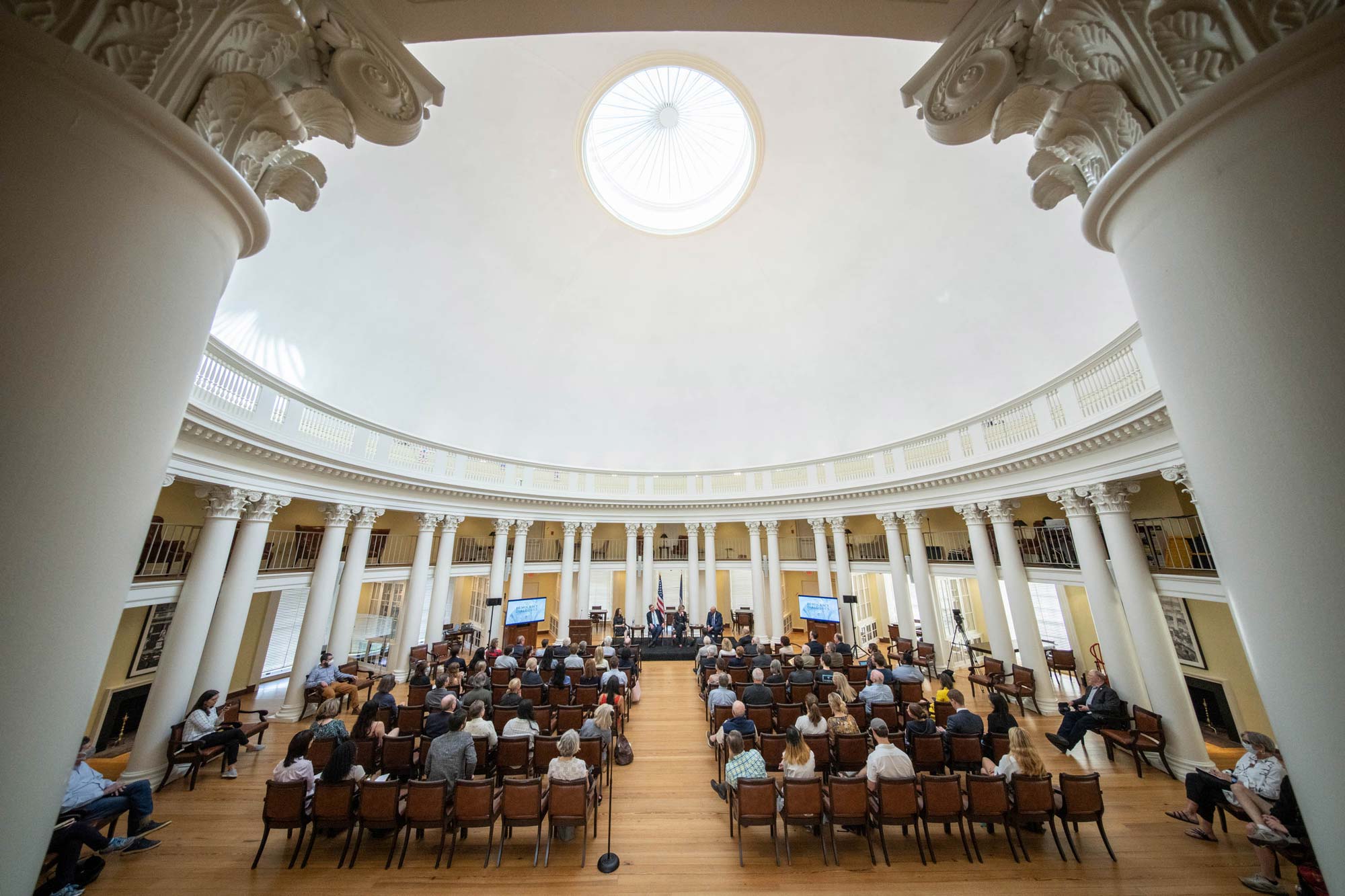 In 1996, Section 230 of the federal Communications Decency Act was passed as a way to provide a legal shield for online platforms with user-generated content. It states, “No provider or user of an interactive computer service shall be treated as the publisher or speaker of any information provided by another information content provider.”

Speaking Thursday in the University of Virginia’s Rotunda, former U.S. Rep. Barbara Comstock called the rule “the 26 words that changed the Internet.”

The debate over Section 230’s power – something that has played out publicly in recent years and has only heated up since the 2020 presidential election – served as a driving point of discussion between Comstock, a Republican, and Warner, a Democrat.

In February 2021, Warner was part of a group of Democratic senators that introduced the Safeguarding Against Fraud, Exploitation, Threats, Extremism and Consumer Harms Act. Better known as the SAFE TECH Act, this legislation sought to reform Section 230 and allow social media companies to be held accountable for enabling such behavior as cyberstalking, targeted harassment and discrimination on their platforms.

“The basic idea is if I do some action that would be illegal in the real world, in terms of discrimination or harassment, or if I’m a TV station or radio station and I’m putting up duplicitous advertising that leads to a scam,” Warner said Thursday, “all those things are illegal in the tangible world. I think you should be able to bring a suit on those cases in the virtual world, on to the platforms.

“It doesn’t guarantee that you will be successful, but it will say there ought to be some path to redress.” 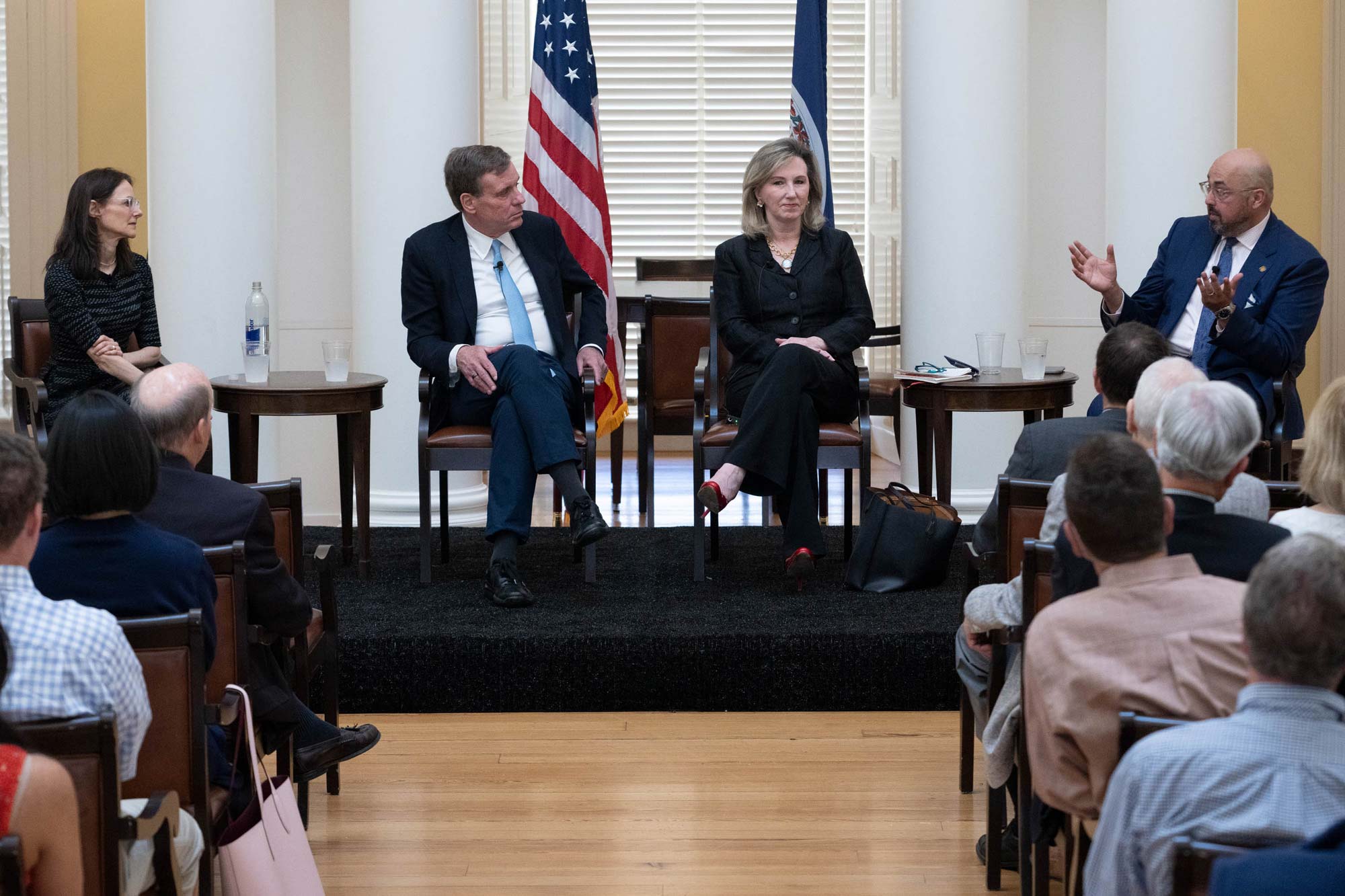 Warner then referenced Herrick v. Grindr, a civil lawsuit made by Matthew Herrick against the online dating app after someone mimicked Herrick’s profile, leading to abuse and harassment. A U.S. federal appeals court refused to hold Grindr liable, however.

Herrick “couldn’t even get injunctive relief on what would be obviously harassment in any other setting,” Warner said.

“I think the First Amendment clearly means you can say stupid stuff. That doesn’t mean, though, that then gets to be broadcast to 6 billion people. The line I’ve tried to draw is if it’s illegal in the tangible world, you ought to at least be able to bring a case in the virtual world, in case of a Section 230 report.”

Comstock went to the roots of Section 230 to deliver a point about its standing effectiveness. She highlighted Ukraine President Volodymyr Zelenskyy’s use of Facebook and Twitter to deliver messaging during the war with Russia and the unity it’s produced among Ukrainian allies, including the United States.

“This man is out there in the street saying, ‘I’m staying here,’” Comstock said. “He is presenting that there’s no gatekeepers. And that was the basic concept of Section 230 – no gatekeepers.

“How many of us have been on a network interview? Most of us don’t get to do that. Most of us haven’t been on cable. You might submit an op-ed or a letter to the editor to the newspaper, but they may not run it. 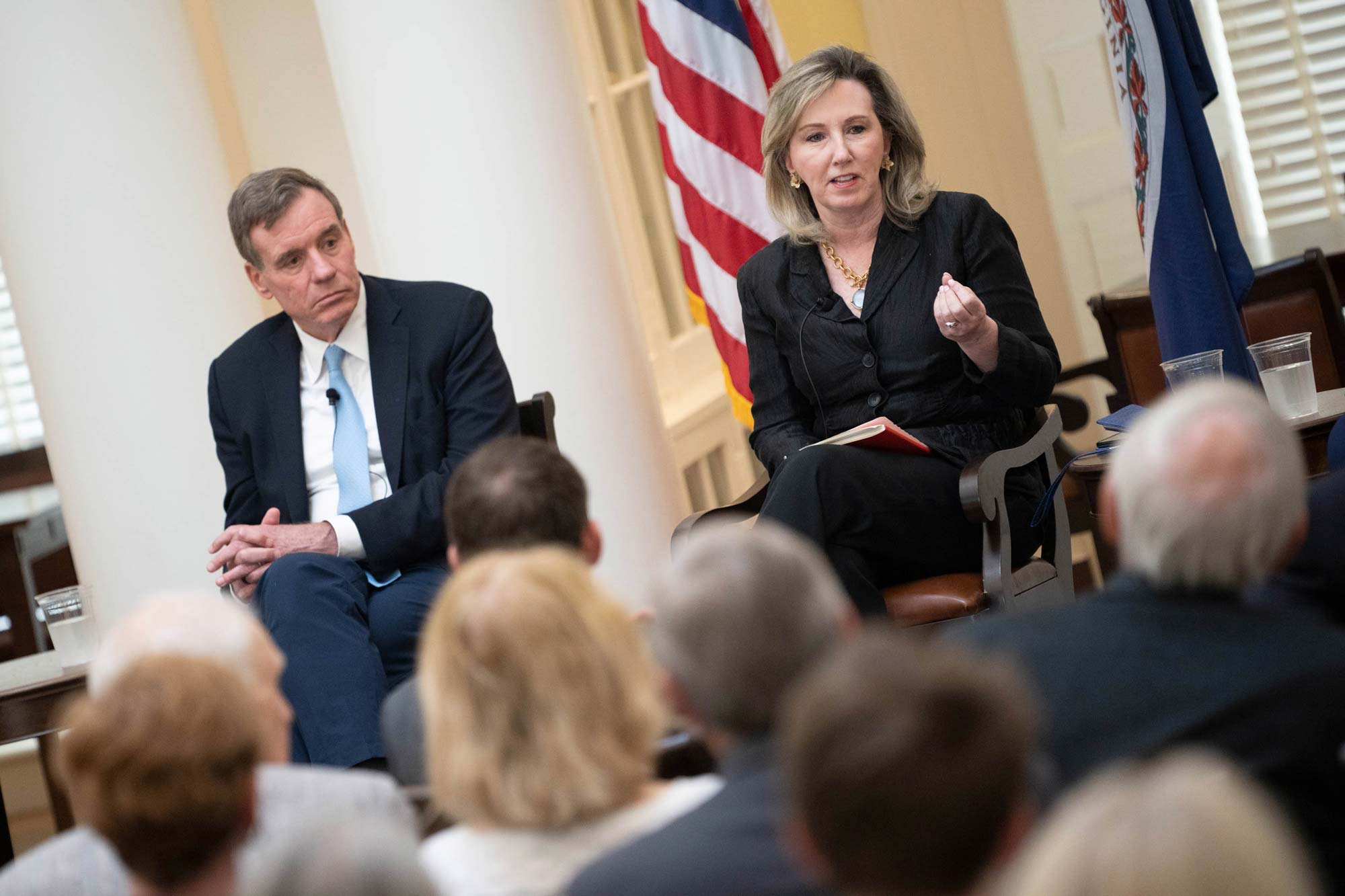 Comstock served in Congress at the height of the #MeToo movement and she watched the progress of the Black Lives Matter movement after George Floyd’s murder in summer 2020. Both movements had origins in social media.

“Everyone saw the unfiltered [Floyd] video and you couldn’t deny it,” Comstock said. “And I think it had a very powerful positive effect. There were riots and bad things, too, but overall, that was a good thing that we would all hear directly from the people. There was power in hearing that unfiltered voice that hadn’t gotten through the media in many senses. You now see in traditional media many more diverse voices. And I think that’s in large part because of Black Lives Matter.”

While the positive and negative side effects of Section 230 linger, Comstock said it’s important to note it was co-sponsored 26 years ago by a Republican (Rep. Christopher Cox of California) and a Democrat (Sen. Ron Wyden of Oregon).

“These two very different philosophical perspectives on politics came together and wrote this,” Comstock said.

Perhaps, she said, that can serve as hope for the future.

What Is Biotechnology? Where Is It Headed at UVA? END_OF_DOCUMENT_TOKEN_TO_BE_REPLACED