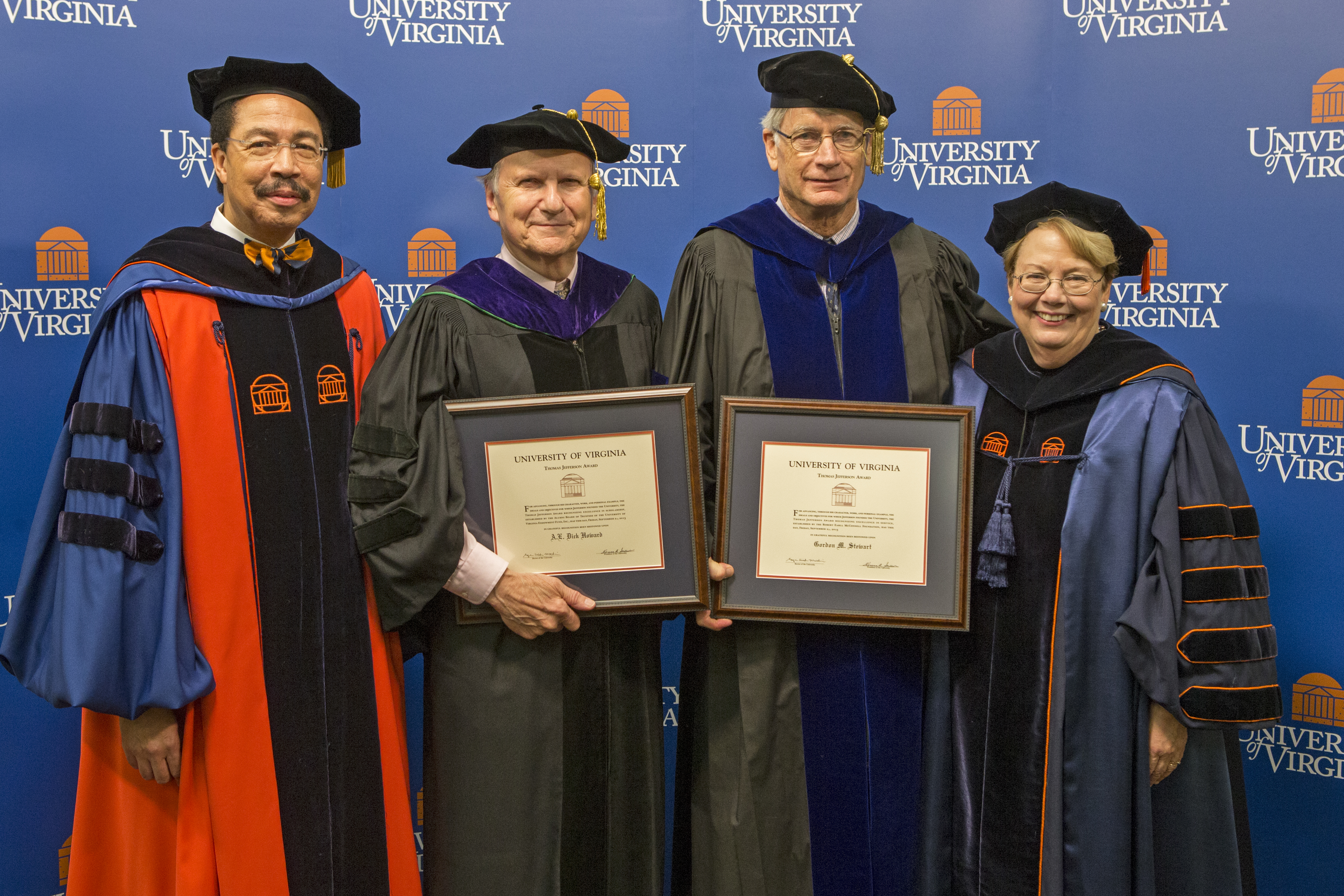 Howard received the award for his scholarship and Stewart for his service to the community.

“The Thomas Jefferson Award is the most prestigious honor the University presents to faculty members, and the list of recipients includes some of the University’s most distinguished teachers and scholars,” said University President Teresa A. Sullivan, who earlier in the ceremony had bestowed Intermediate Honors upon 414 third-year students.

Howard, in his 50th year on the School of Law faculty, is considered one of the University’s best teachers and most devoted citizens, as well as one of the world’s leading constitutional scholars.

A Richmond native, Howard graduated from the University of Richmond and earned his law degree at U.Va., during which time he was selected as a Rhodes Scholar and later received a Master of Arts degree from Oxford University. Howard joined the U.Va. faculty in 1964 after clerking for the late U.S. Supreme Court Justice Hugo Black, during which time he developed his interest in constitutional law.

A Supreme Court watcher, Howard has chronicled the Warren, Burger, Rehnquist and Roberts courts, and is a widely published authority on important constitutional doctrines, including federalism, separation of church and state, and the freedoms of speech and press.

Twice Howard has been a fellow of the Woodrow Wilson International Center for Scholars; he served as president of the Virginia Academy of Laureates and was the first Distinguished Visiting Scholar in Residence at Rhodes College in Oxford, England in 2001. He received the Alumni Association’s Distinguished Professor Award in 1981. The Greater Richmond Chapter of the World Affairs Council conferred on him its George C. Marshall Award in International Law and Diplomacy. He was a visiting scholar at the National Constitution Center and the University of Pennsylvania Law School. He was named among the greatest Virginians of the 20th century by the Library of Virginia and the Richmond Times-Dispatch.

“In the sweep and compass of his writings on constitutional law, Mr. Howard is a scholar without peer,” Sullivan said. “He is also a tireless teacher and mentor, having achieved legendary status among law alumni and current students for his keen powers of explanation, his devotion to his students, both personally and professionally, and his inexhaustible patience.”

Stewart, who has been at U.Va. for 41 years, was a central figure in developing the association dean student-advising model, under which Stewart and his association dean peers serve as classroom instructors and key advisers to students who are assigned based on their first-year residence.

Stewart started at U.Va. in 1970 as an assistant professor of German, and was soon named as an association dean by Irby Cauthen, then dean of the College of Arts & Sciences. Stewart strengthened the advising role and redefined the position. He had planned to retire last spring, but Meredith Woo, the current Arts & Sciences dean, requested he stay another year to serve as interim associate dean of the college during a period of transition.

His scholarship has focused on German history, culture, language and literature from 1700 to the present, and during four decades he has taught courses in German, taken students to Berlin and Hamburg, and taught German students attending the University of Tübingen and the Freie Universität in Berlin about all things Jeffersonian. He also taught several times on the Semester at Sea program and has been the driving force behind the creation of the new Center for German Studies, bringing together faculty from various schools and departments across Grounds.

“Mr. Stewart has left a lasting mark on the fabric of the University through his four decades of service as a teacher, mentor, adviser and friend to countless numbers of students and colleagues alike,” Sullivan said.

The Thomas Jefferson Award was established in 1955, through the Robert Earll McConnell Foundation, to recognize excellence in service. In 2009, the Alumni Board of Trustees of the U.Va. Endowment Fund established a second award for scholarship. The recipients of both awards are selected by committee.

For All of Us END_OF_DOCUMENT_TOKEN_TO_BE_REPLACED