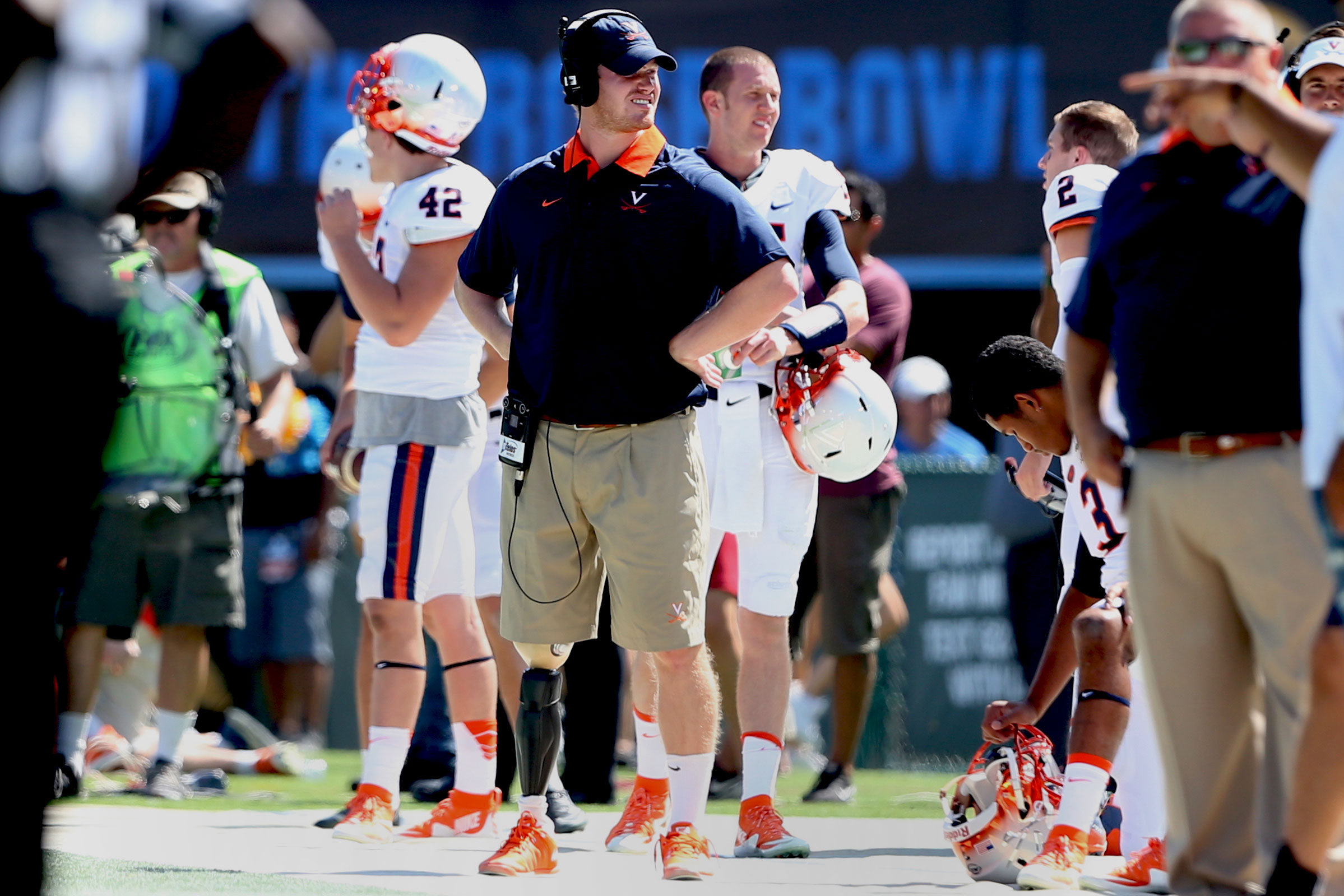 As a sought-after high school football recruit, Jacob Rainey had once or twice imagined himself on the field at the University of Virginia’s Scott Stadium.

And at the Cavaliers’ final home game of the season against the University of Miami on Saturday, that’s just where the fourth-year student will be.

But instead of being suited up in a helmet and pads, Rainey will be on the sidelines helping the coaching staff communicate offensive formations to the players.

“It was weird at first,” Rainey said. “It kind of felt off to be on the other side of things and not playing. But I’ve gotten used to it and it’s been a lot of fun.”

Having grown up in Charlottesville, Rainey was no stranger to UVA. And when the University’s football coaching staff came knocking at his door, Rainey – then a 6-foot-3 quarterback who was equally dangerous on the run or throwing the ball – was considering taking his talents to his hometown school.

In the middle of a scrimmage during his junior year at Woodberry Forest School, though, Rainey sustained a life-changing injury.

“I got tackled in a funky way and I kind of fought through it, but then I got hit again and the next thing I knew my leg was sticking out sideways at the knee,” Rainey said.

Rainey underwent surgery to try to repair a major artery in his leg, but it was unsuccessful, and a week later he had his right leg amputated slightly above the knee.

Rainey’s injury didn’t deter the Cavaliers from continuing to pursue him, though.

“Coach [Mike] London was still here at the time, and this was one of the few schools that continued to recruit me after my injury,” said Rainey, who did manage to return to the field for Woodberry Forest as a senior – believed the be the first above-the-knee amputee to play high school football. “He gave me an opportunity to walk on, and it felt like the right spot for me at the right time.”

Though Rainey initially had his sights set on playing, his role on the team ultimately took a different shape.

“As soon as I got here, Coach [Steve] Fairchild [London’s offensive coordinator] started giving me projects to make cut-ups,” Rainey said, referring to the practice of editing game film. “I was watching film of other teams so that I could come up with schemes that we could maybe incorporate into our offense.”

Over the past four years, Rainey’s volunteer coaching role has grown and has even included recruiting responsibilities. Current quarterbacks coach Jason Beck works closely with Rainey, and said that he commands a powerful presence on the team.

“Jacob is a very hard-working, self-motivated and smart person who has added value to our football program,” Beck said. “The other quarterbacks really enjoy having him in the meetings, at practice and on the sidelines for game day helping us establish the culture and future of our football program.”

According to Rainey, Beck’s mentorship and willingness to show him the ropes has been invaluable.

“He’s really taken me under his wing and helped me out a lot and gotten me involved,” Rainey said. “He’s a very smart guy who knows what he is doing and has a lot of good football ideas, so it’s cool to be able to watch him and learn.”

Rainey, who is majoring in foreign affairs and politics, said that from attending traditional UVA events like the Lighting of the Lawn to the football team’s victory over Duke earlier this season, his time at UVA has afforded him many memories that he won’t soon forget.

“It’s been the best experience,” Rainey said. “I’ve made really good bonds and really good friendships that will last a lifetime.”

Though circumstance may have led him down a path he didn’t originally envision for himself, Rainey said it has opened his eyes to future opportunities – like the possibility of making a career out of coaching.

“When I first got here and started doing the whole coaching thing, I thought I’d do it throughout college and it would be fun, but then that would be it,” Rainey said. “I’ve realized, though, that this is what I really enjoy and want to do.”

Rainey believes that his personal experiences have provided him with a perspective that he hopes he can convey to others.

“No matter how dark or dim a situation might feel or seem, there’s no point to stop before it’s completely over. Regardless of what’s going on around you, if you focus on what you’re doing and what you can control, you can reach your ultimate goal,” he said. “You’re never out of the fight. Play to the end.”

And as he prepares to wrap up his final season with the Cavaliers, there’s one sentiment that Rainey said he will carry with him for the rest of his life: “Go ‘Hoos!”

For All of Us END_OF_DOCUMENT_TOKEN_TO_BE_REPLACED