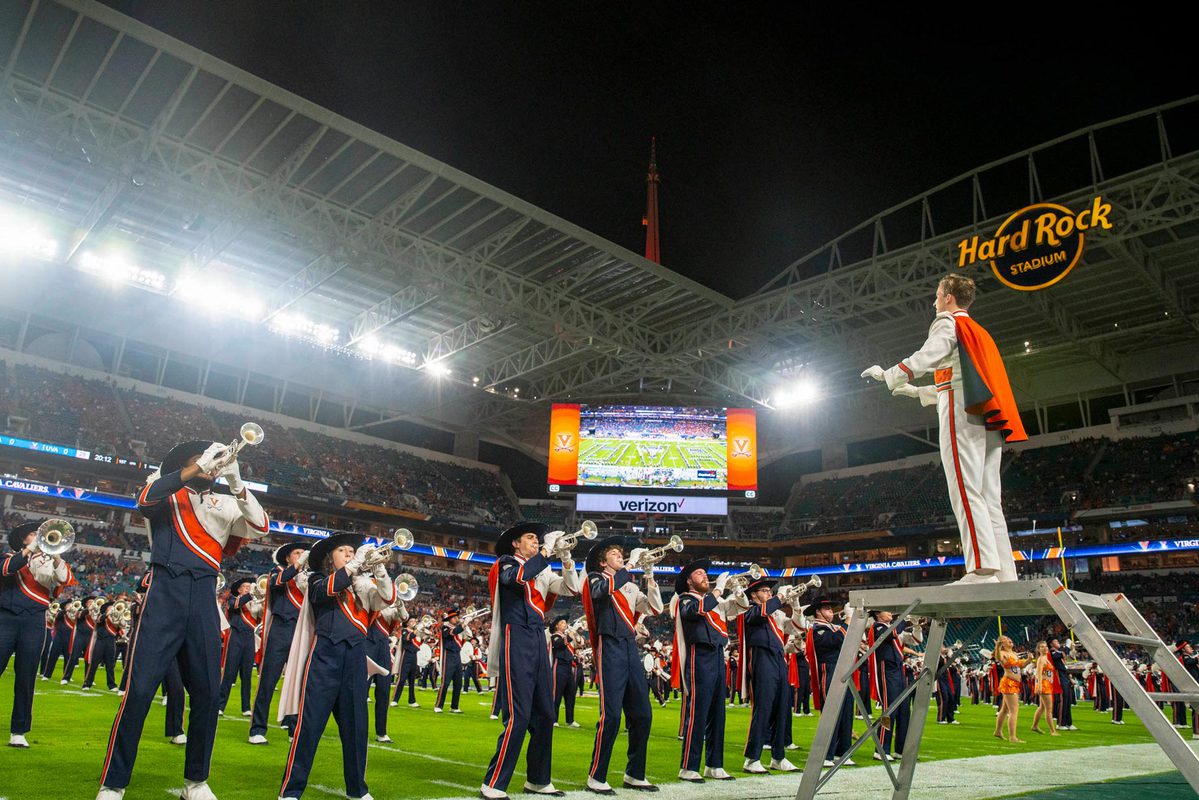 At the beginning of the radio program, host Raina Douris notes that “World Café” usually focuses on bands with four or five members.

“World Café,” an NPR-hosted, music-focused podcast produced by the noncommercial WXPN radio station at the University of Pennsylvania, traveled to Charlottesville in November to take in the city’s thriving music scene and, in an episode released Tuesday, to take listeners behind the scenes with the University of Virginia’s Cavalier Marching Band. The program, NPR's most-listened to music program, is heard on 214 radio stations across the U.S. and has been broadcast on NPR since 1992.

Douris joined the band for one of its weeknight practices, as the student musicians worked on a show honoring military veterans to be performed at halftime of UVA’s Nov. 9 football game against Georgia Tech. The show included formations honoring each of the five military branches, with band members marching to form everything from a flying fighter jet to the U.S. Marine Corps War Memorial statue based on the Battle of Iwo Jima.

“It is kind of hard to believe just how precise those images are when you see the band make them,” Douris said as she watched.

She talked with Andrew Koch, interim director of bands, about how he designs the shows, using software that allows him to move 324 dots into different formations, and how the band uses quick, 10- or 20-second pieces to pump up the crowd between plays or timeouts.

“It was awe-inspiring when I saw it all take shape for the first time,” the host said. “I literally got goosebumps.”

Douris was also inspired by the students themselves. She talked with students in various instrument sections, including Alison Verster, a clarinetist who also co-leads an organic chemistry study session for her bandmates after practice each week.

“We support each other not only on the field, but in the classroom, which is great,” said Verster, who is also a resident adviser and a chemistry teaching assistant, and volunteers as a language translator at the UVA Medical Center.

“These students have a ton going on, and they still find time for the band,” Douris said, “even though they are very busy and very ambitious.”

Listen to the full episode here:

Should Alcohol Have Warning Labels About Cancer Risk? Most Americans Say ‘Yes’ END_OF_DOCUMENT_TOKEN_TO_BE_REPLACED