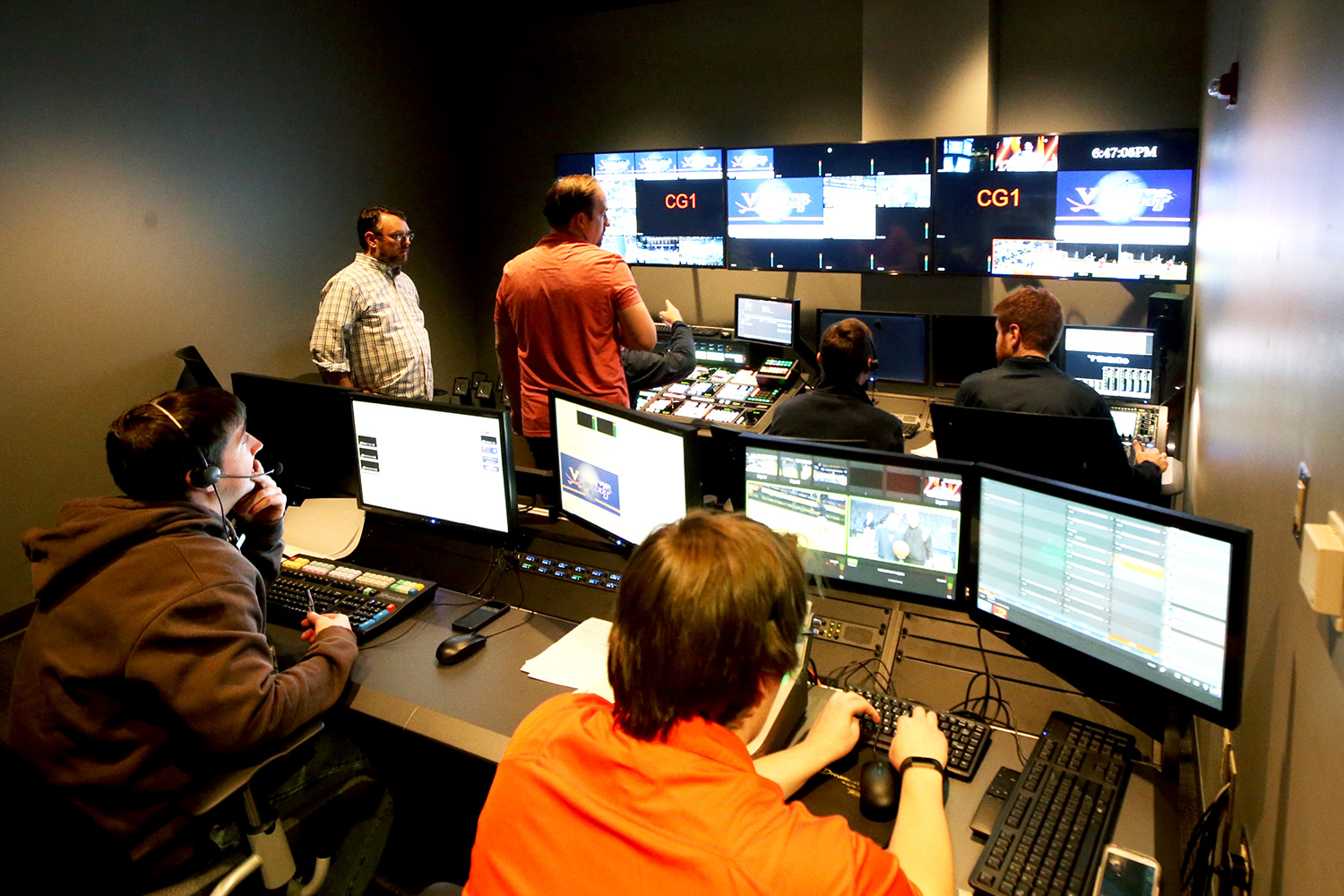 The July announcement that the Atlantic Coast Conference and ESPN plan to launch the ACC Network triggered a flurry of activity at the University of Virginia.

The ACC Network, a dedicated television channel, will go on the air in 2019, the conference said. But fans would also enjoy immediate benefits. Starting in August, hundreds of exclusive live events could be seen on ACC Network Extra – a digital channel accessed through ESPN3 on WatchESPN and the ESPN app.

ESPN will rely on schools to produce many ACC Network events. This means all 15 conference institutions must have broadcast facilities that meet ESPN’s broadcast production requirements. UVA, along with several other ACC schools, is in the process of making significant upgrades to its broadcast video capabilities.

UVA’s video services unit was created in 2004. Two years later, it moved to John Paul Jones Arena and into a new office that housed two standard-definition control rooms. Since the fall of 2006, the “Hoo Vision” videoboard productions for men’s and women’s basketball, men’s and women’s soccer, men’s and women’s lacrosse, and baseball have all been run from JPJ, with fiberoptic cable linking the facilities. Connectivity to the University Hall Turf Field for field hockey was added later.

Virginia athletics administrators knew the day was coming when the control rooms would have to be upgraded to support high-definition video and the production capabilities expanded to increase the department’s ability to cover multiple events. However, UVA wanted to know the requirements of a conference network before making a significant investment in technology.

“The upgrades represent a complete change in our video infrastructure,” said Todd Goodale, UVA’s senior associate athletics director for external affairs. “We’ve been able to take advantage of the latest advancements in production technology by waiting until the ACC Network plans were finalized.”

The cost of the enhancements at Virginia – approximately $6 million – will be covered by future revenue generated from the network through conference distributions.

For assistance in the renovation project, UVA hired a broadcast and A/V consultant experienced in control room design and integration. Over the past three months, the video services office in JPJ has been modified to include three high-definition control rooms and a dedicated audio booth. All of UVA’s athletics facilities will be connected to the control room in order to produce ACC Network events.

The control rooms were ready for use for basketball videoboard (Hoo Vision) productions starting with the Nov. 11 UVA women’s opener against Middle Tennessee State. The first ACC Network Extra basketball game produced by the Virginia video services staff will be on Dec. 16, when the women’s team hosts Illinois-Chicago.

“Obviously, we’re always thinking about recruiting and how it can help us,” head women’s basketball coach Joanne Boyle said. “I think you can recruit nationally sometimes at Virginia, and if parents feel like they can watch their children on TV, it gives a little more reason to say, ‘OK, I can maybe let them go a little bit further outside the area than we’re really thinking.’”

Virginia is now able to produce three events simultaneously, which could include any combination of ACC Network or Hoo Vision productions.

“One of our goals, and this extends across the conference, is that fans can’t tell the difference between an event produced by the schools and one produced by ESPN,” Goodale said.

With the launch of the ACC Network and the increased demand for production, Athletics will hire additional staff members over time to support the unit. There will also be opportunities for UVA students to gain professional broadcast experience. Discussions are also underway to develop partnerships with the College of Art & Sciences to create internships and learning experiences within the University’s academic curriculum.

The conference schools are required to produce a minimum of 600 events for ACC Network Extra during the current academic year. That number increases by 125 each year until 2019-20, when a minimum of 975 digital events are to be produced. That year will also mark the start of the linear network, and conference schools will be required to produce more than 100 broadcast events in total to support the ACC Network.

This fall, while the control rooms were renovated and expanded, the video services unit has produced events for ACC Network Extra with one camera and a play-by-play announcer. Beginning with women’s basketball game on Dec. 16, UVA will produce events for ACCNE with multiple cameras in high definition that feature ESPN’s graphic package. The spring sports broadcast schedule should be announced in early 2017, and Virginia’s teams are expected to be featured prominently.

“I was ecstatic when [the ACC/ESPN plan] was announced, because I think that certainly this is the trend of where everything’s going in college athletics,” head baseball coach Brian O’Connor said.

“I think the ACC Network is going to be great for Virginia baseball. Our fans who aren’t close enough to get to a ballgame can follow our program very closely, and I also think it can make a huge impact on recruiting. I think the more that you’re on television, the more [prospects] get a chance to see you and identify with your team.

“That said, our fan base in our stadium has made the difference in our program. So it’s going to be vital moving forward that that environment continues to exist, with fans coming to the stadium and supporting our team.”

Games will not be the only programming shown on the ACC Network. To position UVA to produce as much programming as possible, the former Cavalier Team Shop at JPJ is being transformed to a full broadcast studio that is likely to be used for more than 250 days a year. “The studio will be very useful to create additional content, not just in support of the basketball programs, but across all of our sports,” Goodale said. “We will be able to use the studio to improve the presence of video on our social media channels and the programming offered on VirginiaSportsTV.com. When the ACC Network is launched in the fall of 2019, we’ll be in a position to provide studio programming directly to ESPN.”

In an athletics department with 25 teams, UVA has long recognized the value of video production. A video board was installed at Scott Stadium in 1998, and in the years that followed “the administration responded to the needs of our teams and the advantages of investing in video technology to enhance the experience for fans who attend our events,” said Goodale, who served as the department’s director of video services when the unit was created.

“It’s all really expanded how we can use video for the game-day experience,” Goodale said, “and we’ve been really fortunate that we’ve been able to invest in the staff that we have to produce the [“Chasing Uncompromised Excellence”] weekly television show and VirginiaSportsTV.com, and we’ve been able to help the coaches in their analysis of games and practices. The use of video across all of our sports has been really helpful to the success of our teams and the development of our student-athletes.”

As a result of that investment, Goodale said, “more people will be exposed to Virginia Athletics than ever before. Through the ACC Network and our social media channels, we will deliver our programming to fans across multiple devices and platforms. They will be able to watch our sports programs and learn more about our student-athletes in the space that best suits them, and I think that’s really positive.”

A Year We Will Never Forget: 2019-20 in Review END_OF_DOCUMENT_TOKEN_TO_BE_REPLACED

‘What Will You Carry With You?’ Remarks From UVA President Jim Ryan END_OF_DOCUMENT_TOKEN_TO_BE_REPLACED