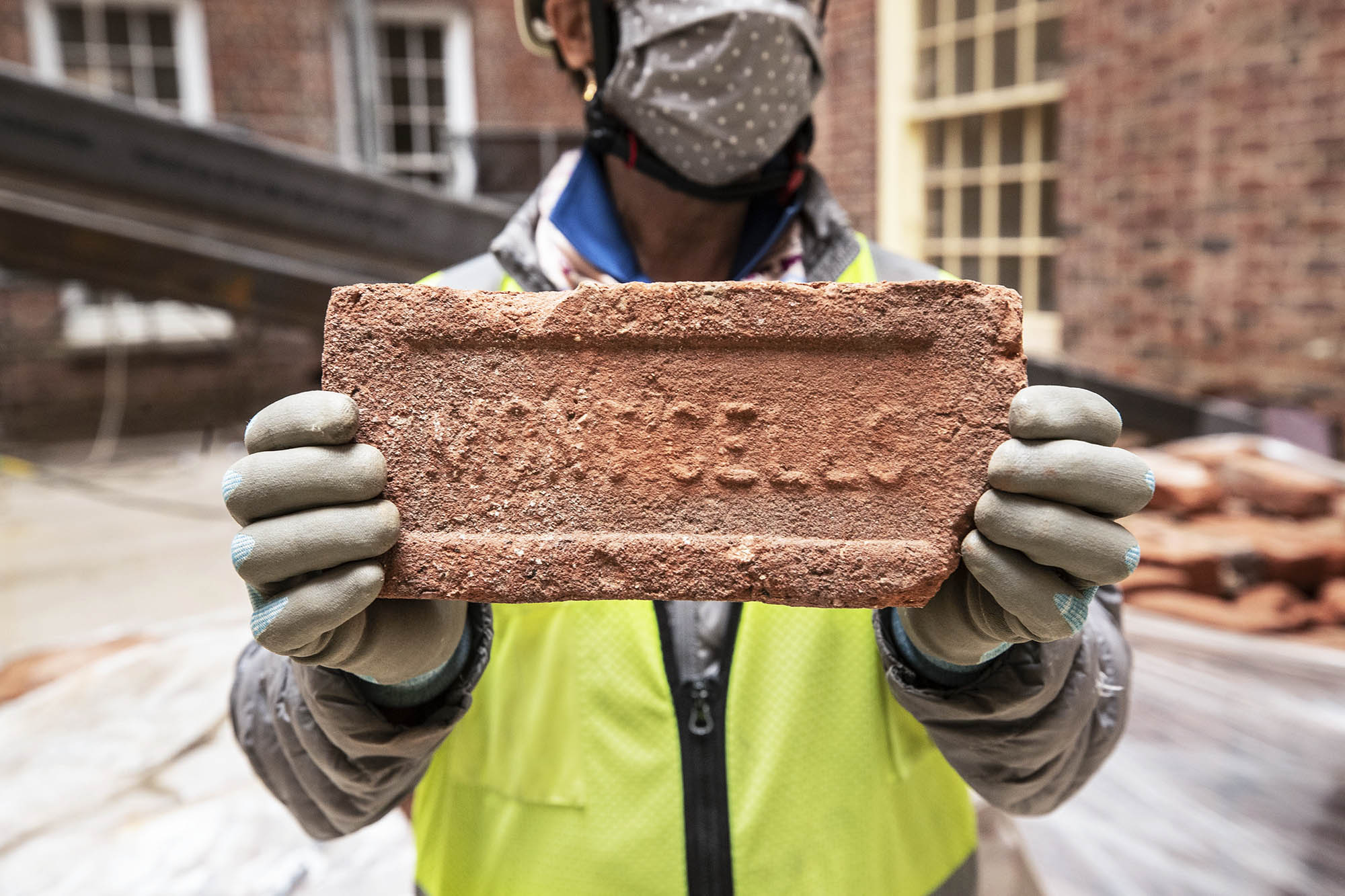 A brick is not always just a brick.

In the extensive renovation of the University of Virginia’s Alderman Library, workers for contractor Skanska have found locally made, wood-molded “Monticello” bricks. The over-sized bricks, 4 inches by 3 inches by 9 inches, weighing in at 5 ¾ pounds, known in the trade as a “jumbo brick,” were found inside the chimney in the McGregor Reading Room.

The reading room was a gift to the University from Tracy W. McGregor of Detroit, who had a large American history library and an interest in Virginia. A visitor to Charlottesville, he founded the McGregor Fund to support charitable works. Upon his death in 1936, his book collection passed to the trust, with instructions that it be donated to an institution that had “fine ideals of higher education.” In 1938, the fund trustees donated the collection to UVA.

Alderman Library was already under construction at the time, but a space was set aside to house McGregor’s collection of books and manuscripts. 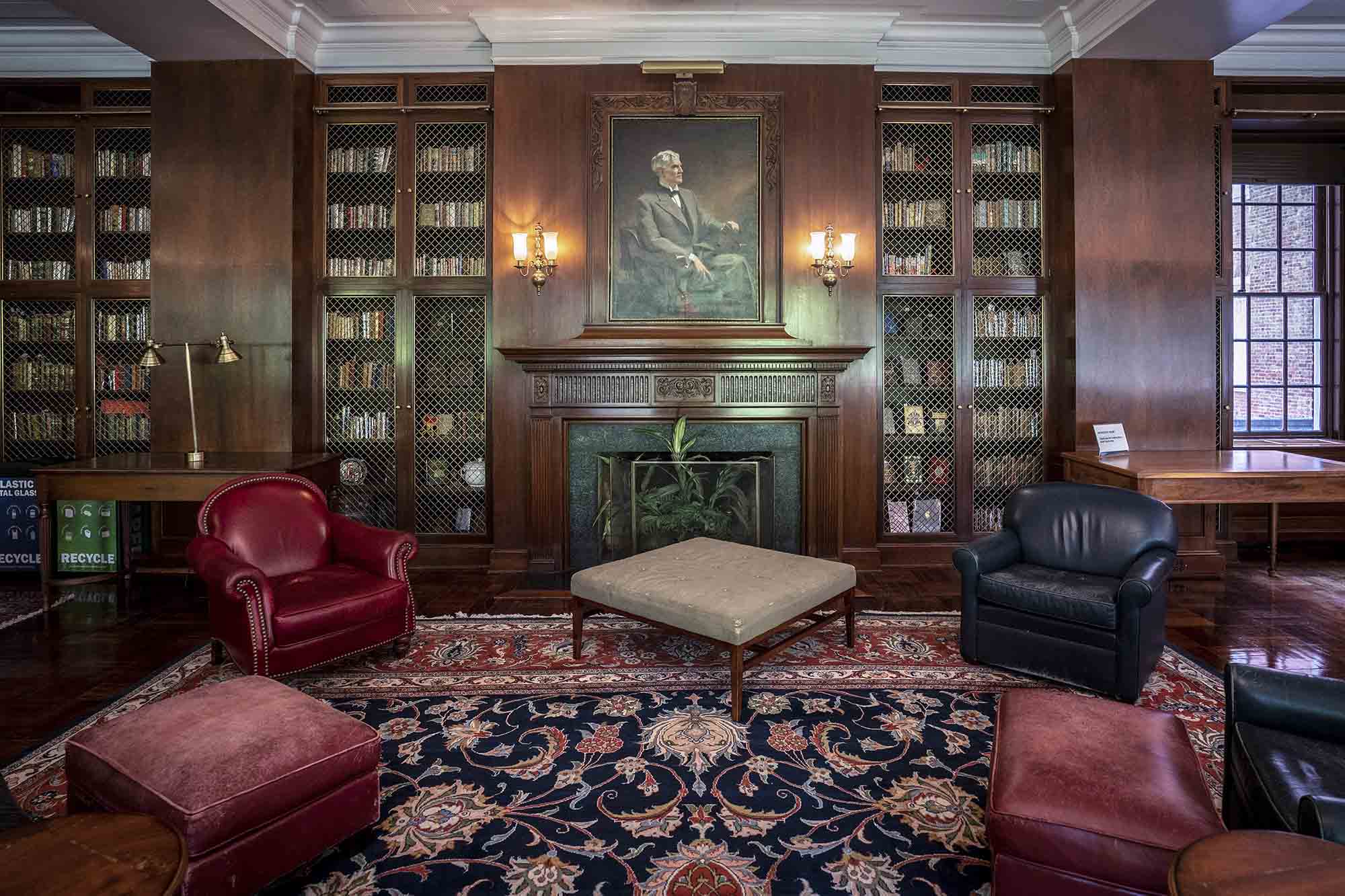 About 500 Monticello bricks were recovered inside the chimney in the McGregor Reading Room. (Photo by Sanjay Suchak, University Communications)

“When the McGregor Room was donated to UVA, most of the Level 2 east wing of Alderman Library was modified to accommodate it,” said Kit Meyer, project manager of the renovation. “A fireplace was added. The flue ran up a chimney that was added in one of the light wells.”

While the bricks were made locally, they are not common at the University.

“In my eight years, I haven’t seen any Monticello brick on Grounds,” said Mark McGhee, senior mason supervisor for Facilities Management. “We have dismantled a lot of brick walls and are yet to come across any.”

The brick business has been around Albemarle County a long time. Peter Jefferson, Thomas Jefferson’s father, used brick made from the red clay of an adjacent hillside for the foundation of a house he built near Shadwell in 1737. Through the 18th century, because of a suitable local clay, brick was a prominent area building material.

The Monticello Brick Company was incorporated in 1925, according to a history of brickmaking in Charlottesville and Albemarle County written in 1998 by Palmer C. Sweet for the Virginia Department of Mines, Minerals and Energy. Palmer cited a 1926 article in The Daily Progress that the company opened for business around June of that year.

“It is also noted in the article that the local plant will produce the brick for the new University Medical School,” Palmer wrote. “About 20 men were employed by the company, which owned about 10.5 acres from which the clay raw material would be mined for many years.”

Monticello Brick Company was the main producer of bricks for the area for about 15 years. 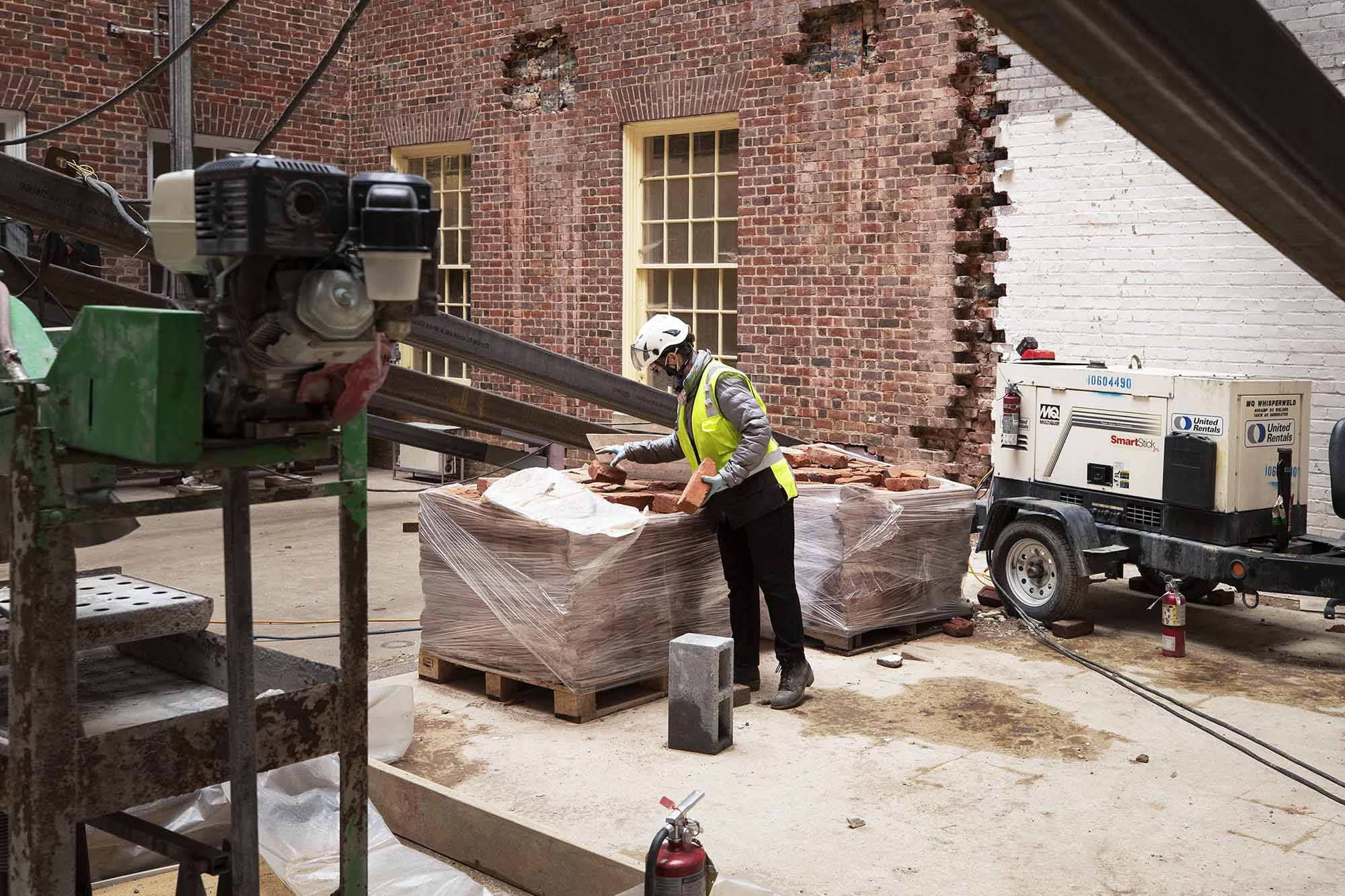 The recovered Monticello bricks were in fairly good condition. Facilities Management will keep them for any repairs that need to be made to the Old Medical School. (Photo by Dan Addison, University Communications)

“Around 1930, beehive kilns were installed and conveyors were used at the plant,” Palmer wrote. “In beehive kilns, the green brick were piled up in a beehive shape and fired with heat from the combustion chamber below, This allows for the heat to rise up through the brick. In 1930, brick from the Monticello Brick Company were used for testing the physical properties of common brick in Virginia.”

The corporate charter for the Monticello Brick company was dissolved in 1942. Old Colonial Brick Inc. appears to be the company’s successor, according to Palmer’s history. James T. Clarke, who had been a bookkeeper for Monticello Brick in the 1930s, took over the operation after he was discharged from the Air Force in 1945, but Palmer noted the operation did not last long because of the poor quality of the raw material remaining in the area.

“The company office is now a home,” Meyer said. “The area where the clay was dug and the brick yard are currently a 11-acre forested area in Fifeville, between the company office and University Manor.”

The Monticello bricks that library renovation workers recovered from the dismantled chimney were in fairly good condition.

“These bricks were just used as filler,” said Henry Hull, project coordinator of the Alderman work for Facilities Management. “They weren’t set in mortar, but dry-laid in between the exterior wall and flue of the McGregor Room chimney, as if they had been left around from another project.”

The project from which the bricks were left over was likely the old Medical School, built in the 1920s.

“Facilities Management will keep them for any repairs that need to be made to the Old Medical School since it is a unique brick that is no longer available,” Meyer said.

Hull said all of the bricks visible on the exterior of Alderman Library are handmade brick by the E.T. Mankin Brick Company out of Richmond and display the Mankin name in the “frog” of the brick – an indentation in the surface where a manufacturer’s name is imprinted.

“There’s a tremendous amount of color variation brick-to-brick on the building, which made it all the more important to find a good match for the new addition,” Hull said.