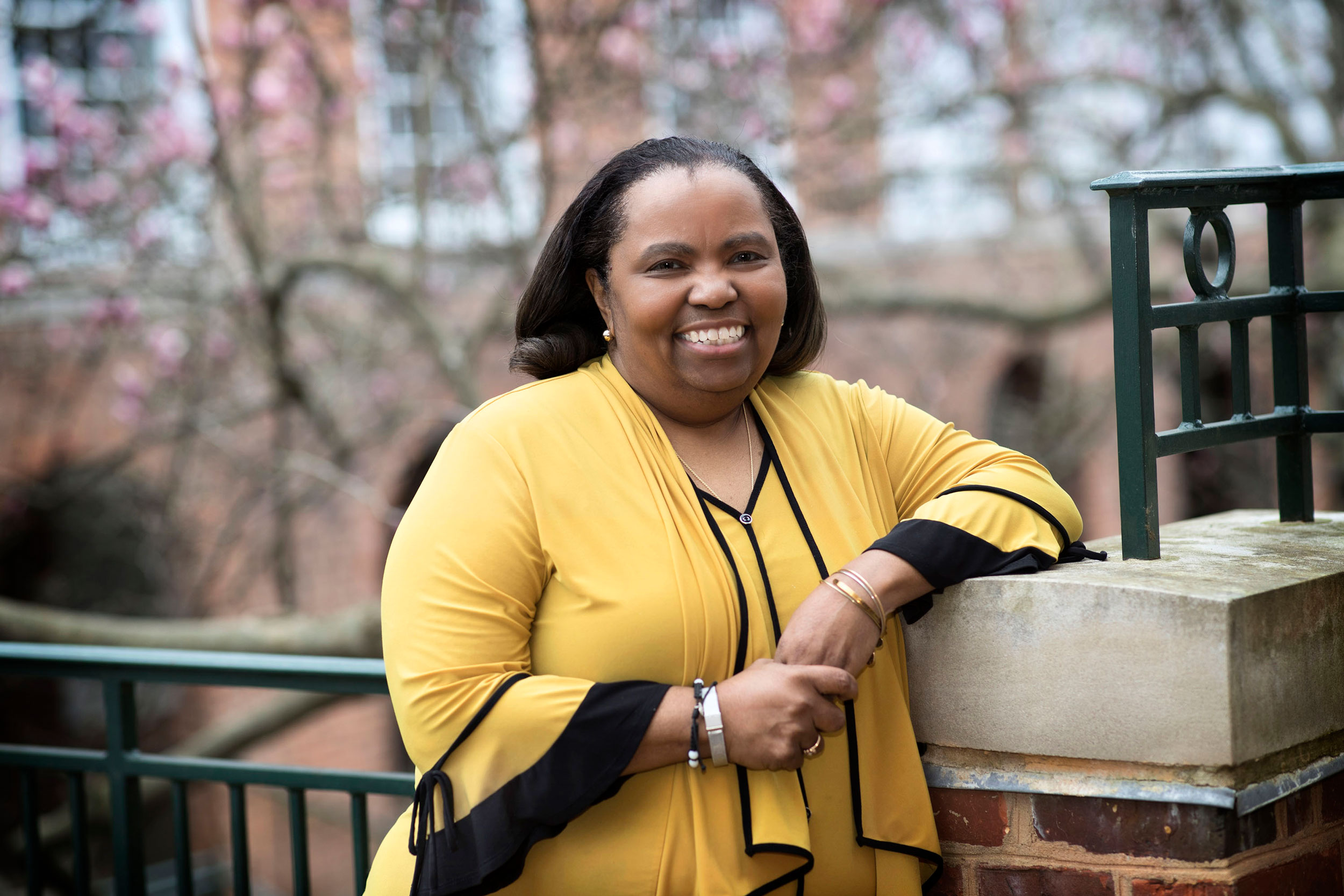 Over a typical year, Valerie Gregory, associate dean of undergraduate admission at the University of Virginia, and her hardy team of admissions counselors take road trips across the commonwealth and the country, traveling as far as California, Texas, Illinois, Georgia and Connecticut and meeting with thousands of potential students of color and their families, as well as veterans, LGBTQ students and those from first-generation and low-income families.

For almost 20 years, Gregory has dedicated not only her workdays, but also many nights and weekends to recruiting talented students to the University – and to staying in touch with them once they are here.

Dean of Admission Greg W. Roberts made the bold claim that Gregory “has done more to positively impact undergraduate student diversity than any individual at the University” in successfully nominating her for the 2019 John T. Casteen III Diversity-Equity-Inclusion Leadership Award, which she will receive at a luncheon on Friday.

The University’s Office for Diversity and Equity established the award in 2010 to honor a member of the UVA community whose deep commitment and distinct passion for diversity includes the ability to create a setting in which the promotion of diversity, equity and inclusion is paramount.

Gregory’s colleague, Associate Dean of Admission Lee Morgan Politis, said Gregory is responsible for no less than a culture shift on Grounds because of her work to make the UVA community more diverse.

“I count her as one of the most impactful, generous and energetic people I know,” said Politis, who has worked with Gregory since late 1999. “I wish you could see her, day in and day out, working to attract diverse students to the University, and then welcoming them when they arrive, supporting them after they enroll. You would see someone you might think just returned from a vacation. Smiling, listening, incredibly gracious.”

“She is one of the most impactful, generous and energetic people I know.”

“The selection committee received a strong pool and record number of nominations this year,” said Dr. Marcus Martin, vice president and chief officer for diversity and equity. “Dean Valerie Gregory was a standout, receiving high marks by the selection committee for her deep commitment, distinct passion and leadership in achieving a sustainable and quantifiable impact on diversity, equity and inclusion at the University and in the community.”

Ryan Hargraves, who supervised Gregory when he worked in UVA admissions, said that she “has transferred her abilities to nurture and lead, which she used to be successful as a former teacher and principal in the area, to her two-decades-long career as a diversity leader at the University.

“She is truly concerned about the well-being of others and has been a tremendous edifier of students underrepresented in the higher education context,” he wrote. “Her former students and staff have gone on to impact the University and the world as distinguished alumni and leaders in a broad range of industries.”

She also has worked to create partnerships with education organizations, such as Questbridge and The Posse Foundation, which are devoted to boosting underrepresented students’ access to higher education.

“As a result of her work, we have seen minority student enrollment reach record heights at UVA, and the increase in African-American and Hispanic students has doubled and tripled over the past 10-year period,” Roberts said. He also credited Gregory as integral to the rising number of entering first-generation students, which has improved 28 percent over the last five years.

After the violent white supremacist “Unite the Right” rallies of August 2017, when many parents and students were concerned about Charlottesville’s racial climate, “Valerie worked to reassure families and encouraged students to apply so they could join us and fight against intolerance and injustice,” Roberts said. “Her message resonated with families and we enrolled more African-American students than any year in our history, and the yield [percentage of admitted students who chose to enroll] increased for African-American students from the previous year.”

One quality of Gregory’s has remained a constant over the years: her warmth as a mentor and mother away from home to UVA students. Hargraves said she took on that role by her own initiative, not because it’s in her job description.

“She has, throughout the years, welcomed students to her office when they want to chat (or enjoy a piece of her award-worthy pound cake) and opened up her home for brunches and dinners so that these young people have an opportunity to bond with each other and collaborate as scholars,” he said. “The University’s elite retention rate of underrepresented students is due in great part to the warmth and community Valerie has provided during her time with us.”

Brian Balogh, Compton Professor in UVA’s Corcoran Department of History and the Miller Center, also shed light on her influence on Grounds over the years. Fifteen years ago, he and Gregory co-chaired the Culture of Diversity Committee that Balogh described as “a key component” of a University-wide Commission on Diversity and Equity convened by then-President John T. Casteen III.

The commission “led to a series of important reforms, including the establishment of a chief diversity officer for the University. Without Valerie’s quiet-yet-forceful leadership, we would have accomplished far less,” Balogh wrote in supporting her nomination. “She worked inside the commission and more broadly across a range of constituencies to ensure that a number of reforms were carried out.

“Beyond the chief diversity officer, we called for an informal way for students to report racial incidents – an early warning system that is still in place and that has served the University well. As impressive as Valerie’s service during the commission’s tenure was, it was her relentless follow-through after the commission was formerly disbanded that made the real difference. Years later, she was still fighting to ensure that good ideas were fully and effectively implemented.”

Meanwhile, Politis isn’t sure when Gregory stops working and has wondered where she gets her energy.

“I think she gets all that energy because she is deeply committed to supporting underrepresented and low-income students, and she is flat-out determined to make UVA the inclusive place it aspires to be,” she said.

Gregory herself reveals the source of her dedication: the families. “Every time I am able to show the possibilities of coming to a school like UVA, especially when they think they can’t, and they succeed in doing so, then I get the energy to keep going. These families that I have the honor of working with make it all worthwhile,” she said.

What’s Next for UVA’s Class of 2022? END_OF_DOCUMENT_TOKEN_TO_BE_REPLACED